President Donald Trump is looking forward to another summit with Kim Jong Un, he said Tuesday, after the North Korean leader warned Pyongyang could change its approach to nuclear talks if Washington persists with sanctions.

‘I also look forward to meeting with Chairman Kim who realizes so well that North Korea possesses great economic potential!’ Trump said in a brief tweet.

The two leaders made global headlines with an unprecedented summit in Singapore in June, where they signed a vaguely-worded pledge on denuclearization of the Korean peninsula.

But progress has since stalled with the two sides disagreeing over what the declaration means, and the pace of U.S.-North Korean negotiations has slowed, with meetings and visits cancelled at short notice.

The North is demanding relief from the multiple sanctions imposed on it over its banned nuclear weapons and ballistic missile programs, and has condemned U.S. insistence on its nuclear disarmament as ‘gangster-like.’ 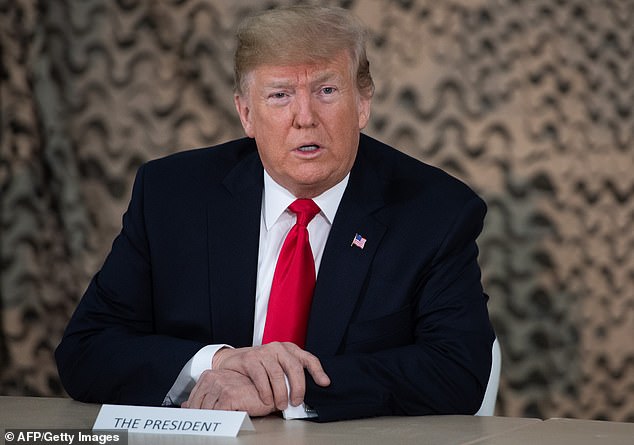 President Donald Trump is looking forward to another summit with Kim Jong Un, he said Tuesday, after the North Korean leader warned Pyongyang could change its approach to nuclear talks if Washington persists with sanctions 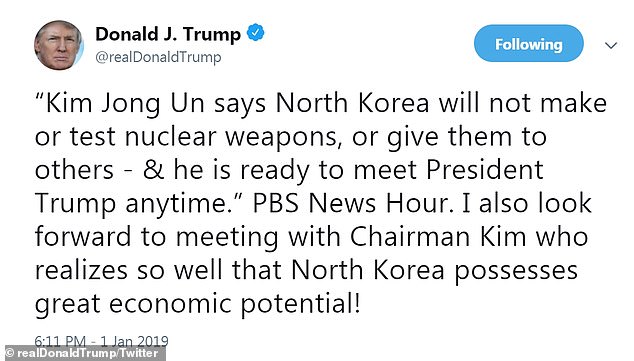 ‘I also look forward to meeting with Chairman Kim who realizes so well that North Korea possesses great economic potential!’ Trump said in a brief tweet

Speculation of a second Trump-Kim summit has ebbed and flowed, with the U.S. president saying that he hoped it would take place early this year.

But a proposed visit by Kim to Seoul before the end of December did not materialize.

Culminating in late 2017, the North has carried out six atomic blasts and launched rockets capable of reaching the entire US mainland, but has now carried out no such tests for more than a year.

In his New Year speech Kim called for the sanctions to be eased, saying that the North had declared ‘we would neither make and test nuclear weapons any longer nor use and proliferate them,’ and urged the U.S. to take ‘corresponding practical actions.’

If Washington instead continues with the measures, he added, ‘we may be compelled to find a new way for defending the sovereignty of the country and the supreme interests of the state.’

He was willing to meet Trump at any time, he said.

Kim’s remarks were ‘apparently designed to revive the momentum of the negotiations,’ South Korea’s centrist Hankook Ilbo newspaper said in an editorial Wednesday.

But he was also ‘signalling that he would never be pushed around’, it added.

Joshua Pollack of the Middlebury Institute of International Studies tweeted that Kim was insisting ‘the onus is now on the U.S. to deliver’.

‘The bottom line: Kim remains dug into the same positions on nuclear diplomacy he has occupied over the last six months,’ he added.

Kim delivered his speech sitting in a leather armchair in a book-lined office with a patterned blue carpet, presented as being at the headquarters of the ruling Workers’ Party of Korea. 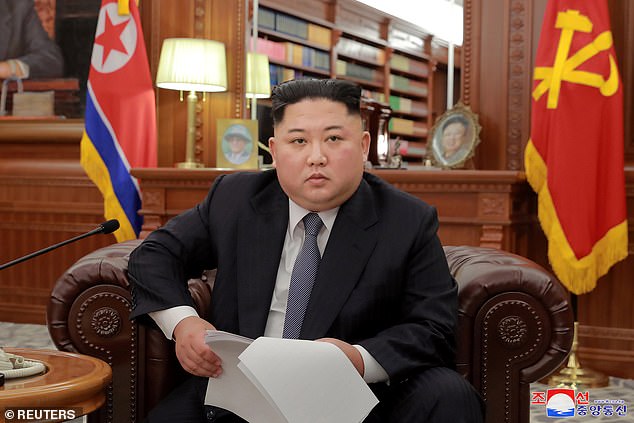 In his New Year speech Kim (seen above in Pyongyang on Tuesday) called for the sanctions to be eased, saying that the North had declared ‘we would neither make and test nuclear weapons any longer nor use and proliferate them’

Large paintings of Kim’s predecessors, his father Kim Jong Il and grandfather Kim Il Sung, looked on and a white phone lay on the side table next to Kim’s chair.

It was a marked departure from previous New Year speeches – always a key moment in the North Korean political calendar – which Kim has usually delivered much more formally, standing at a podium.

One thing that was different from past speeches by the North Korean leader was that it was ‘a relaxed, indoor setting, with him sitting in a comfortable chair rather than standing and speaking in a huge square,’ the Korea Times said.

‘It seems North Korea was once again trying to establish a new identity as a normal country on the global stage and distance itself from the image of the impoverished authoritarian state that the rest of the world associates it with.’

Kim dedicated most of his 30-minute speech to calls to shore up the nation’s moribund economy and curb chronic power shortage – a goal impossible to achieve without lifting of the sanctions.

South Korea – a key U.S. ally in Asia and the North’s capitalist neighbor – praised Kim’s speech, calling it a reaffirmation of Pyongyang’s commitment to denuclearization.

Seoul and Washington have at times pursued divergent approaches to the Pyongyang, with the South pushing cross-border co-operation projects, including connecting railways and roads across the heavily-fortified border and upgrading the North’s tattered infrastructure.

But such plans also require some of the sanctions to be lifted.

The South’s dovish President Moon Jae-in, who played a role of peace broker between the two mercurial leaders, met Kim three times last year – twice at the border truce village of Panmunjom and once in Pyongyang.

Kim sent Moon a message on Sunday, vowing to meet him ‘frequently’ to discuss denuclearisation.

Anti-gay killing suspect struggled with sexuality as lawyer blames Asperger's syndrome and blue eyes
Funeral for 'Baby Jane Doe' found near California highway
Bullied ex-NFL player Jonathan Martin ordered to stand trial for 'Instagram threats'
Trump hits out at Mexico for failing to stop caravans from entering the U.S.
Megyn Kelly shows off her bikini body on a family getaway in The Bahamas
Tony Hawk and former Playboy Playmate and team up to open new Mexican restaurant at Newport Beach
Math teacher adopts student, 13, so he can get on the kidney transplant list
Emails reveal Boeing employees knew about 737 Max issues