Corinna Schumacher told the driver’s fans that ‘we are doing everything possible to help him’ as he battles to recover from a devastating ski accident in  in 2013.

Mrs Schumacher said: ‘We are pleased and wholeheartedly thank you for celebrating Michael’s 50th birthday with him and with us.

‘You can be sure that he is in good hands and we are doing everything possible to help him.

‘Please understand if we follow Michael’s wishes and leave as sensitive a topic as health, as ever, in the privacy. At the same time, we thank you very much for your friendship and wish you a happy and healthy year in 2019.’ 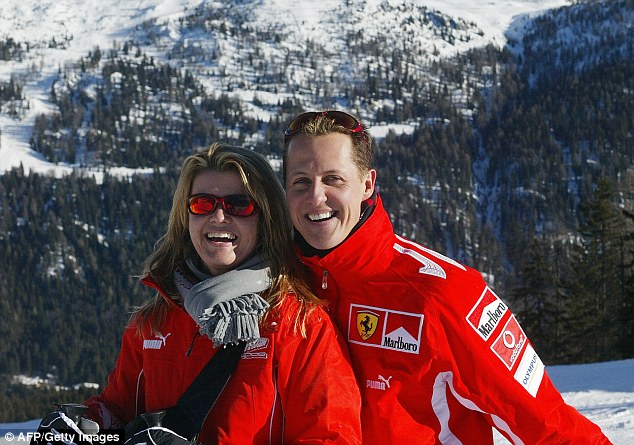 Michael Schumacher’s wife Corinna has issued a rare statement thanking fans ahead of the Formula 1 legend’s 50th birthday tomorrow. The couple are pictured on a skiing trip in Italy

He hit the right side of his head on a rock, splitting open his helmet when he fell while skiing.

Schumacher was rushed to hospital where he underwent several life-saving surgeries and spent the next six months in a coma.

In April 2014, he woke up and was taken from the hospital in Grenoble to a private location, believed to be his house near Lake Geneva, where he is being cared for.

It is thought that Michael is being tended to by a team of 15 physicians who provide round-the-clock care at a cost of £115,000-per-week.

At the time of his release from hospital, his wife Corinna issued a statement asking for support in ‘our joint fight alongside Michael’, but said she would not be speaking further and asked for privacy.

The couple married in 1995 after meeting at a Ferrari party, and have two children together: Gina-Maria, 21, and Mick, 19, who races Formula Three.

Mick won the Formula Three championship with a race to spare last month, and will now make the move to Formula Two with Italian team, Prema in 2019.

Fergie tells how she comforted grieving parents of girl killed by Pret sandwich
Heather Locklear has been placed on a 5150 hold 'after fight with her boyfriend'
Two people are killed in explosion at Russian missile testing site
Cliff Richard, who turns 79 today, will go on tour to mark his 80th birthday
Christina Hendricks loads removal van after shock split from husband
Killer who strangled his girlfriend and stabbed her 15 times in the neck and heart jailed for life
Lily Allen insists the nation should STOP singing Rule, Britannia in wake of Remembrance Day
Britons across the country step outside their homes in eighth weekly 'Clap for Carers' event