A major Russian police and special services operation is underway in Magnitogorsk after the explosion of a minivan and a shooting incident.

Police now believe a New Year’s Eve explosion at a residential block in the city may have been a terrorist attack, according to reports in .

Dozens are feared dead under the rubble of the collapsed block in what was originally considered a gas leak.

A small Gazel ‘minivan’ exploded in a fireball at 1am local time (8pm GMT) in the centre of Magnitogorsk and witnesses then heard repeated shooting. The dramatic scene was caught on videos.

A report said that three suspected terrorists died in the Gazel and that one had escaped and was on the run in the industrial city. 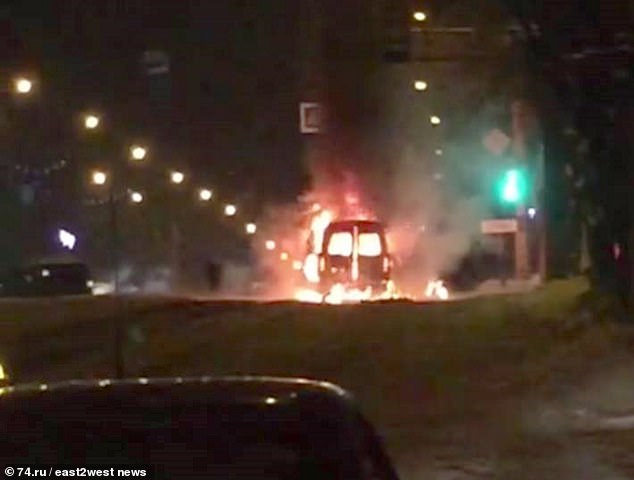 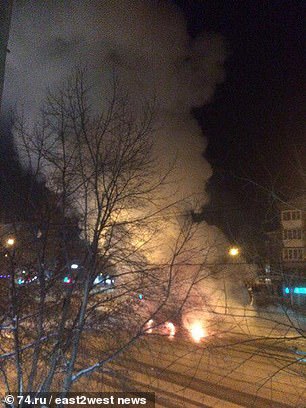 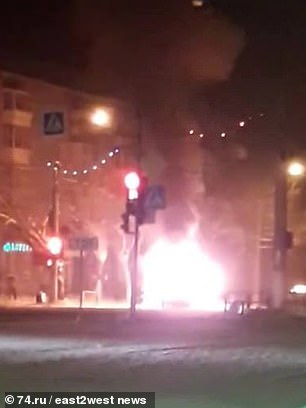 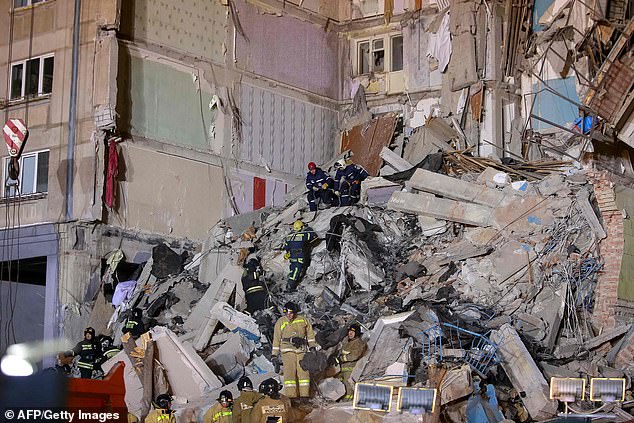 Police now believe a New Year’s Eve explosion at a residential block in the city may have been a terrorist attack, according to reports in Russia

A Urals news website Znak.com reported that the explosion on December 31 at Karl Marx Street was now suspected to be a terrorist attack.

It claimed signs of an explosive had been found in the rubble and that the apartment where the ‘gas blast’ was suspected to have had its epicentre had been rented by a man from ex-Soviet republic Tajikistan.

The news site quoted a source as saying: ‘Three terrorists were killed at night on January 1 in a Gazel vehicle. They tried to shoot back. One of them ran away, police is searching for him.’

The Gazel incident on Lenina Street was around one and a half miles from the blitzed apartment block on Karl Marx Street.

An FSB security service source said: ‘We are not commenting on this information’.

znak.com website was immediately blocked in the wake of the report, but later information came from other news sources. 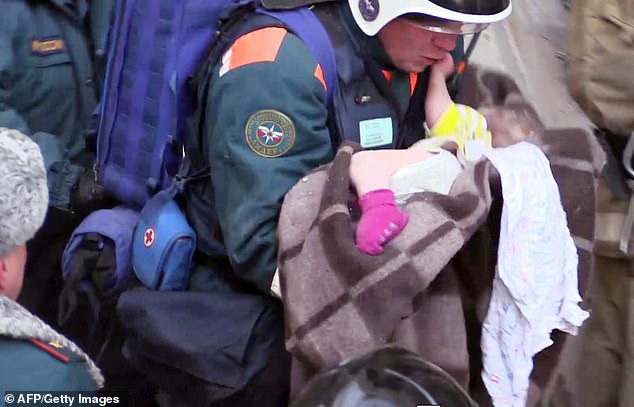 Aten-month old-child was found swaddled in his cot, having survived more than 24 hours in freezing temperatures after an explosion brought down the building

Its report had been headlined: ‘Source: explosion at the house and explosion of the minivan are terrorist attacks.’

The Russian Investigative Committee denied explosives had been found at the site of the apartment block on Karl Marx Street.

A witness said: ‘A friend’s mother lives there. She called her and her mother looked out at the staircase.

‘She encountered OMON special forces soldiers who told her to go back to her apartment.

‘They said they are catching some man at the 7th floor.’ 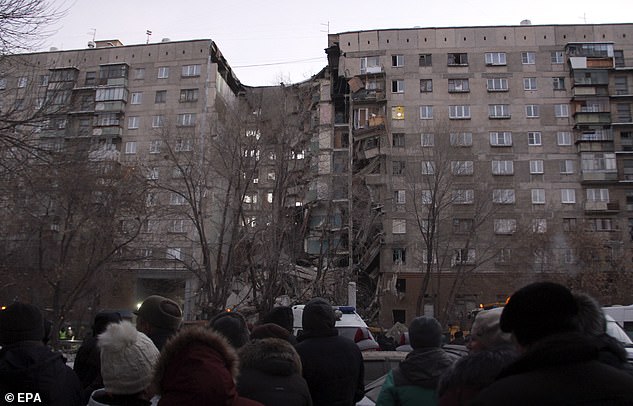 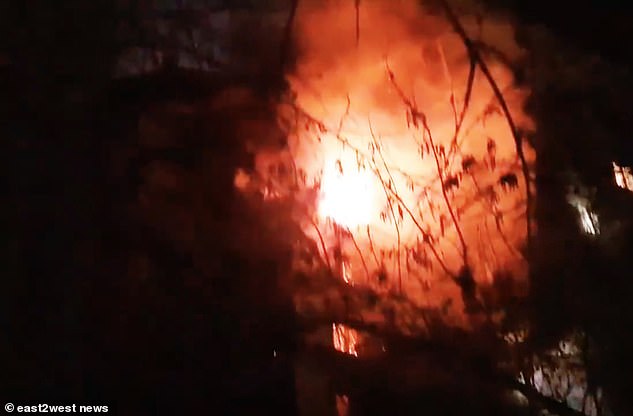 A total of 48 apartments were damaged in the ten-storey building. A huge fire broke out after an explosion

Residents heard shooting in the block.

Nezygar telegram channel – seen as having insider sources in the Russian government – said investigators are now considering ‘all possible versions of what had happened in Magnitogorsk’.

The governor of Chelyabinsk confirmed that three people had been killed in the burned out Gazel.

Witnesses said the body of a driver was lying next to the vehicle, and two more dead bodies were inside the Gazel.

News outlet 74.ru reported: ‘Near the block 91\1 at Lenina Street there are cars of the law enforcement plus buses with people inside.

‘According to information, the residents of the block are warming up (in the buses) – they were evacuated for the time of police operation aimed at detaining the suspect.

‘According to some other information, these people are law enforcement too.

‘Still there is no official comments of what has been going on in Magnitogorsk tonight.’

Social media claimed there was ‘panic’ in the city amid fears it was under siege from a terrorist attack. 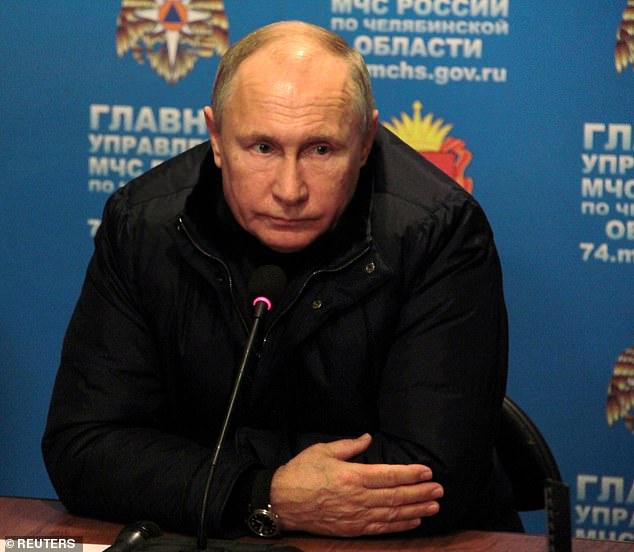 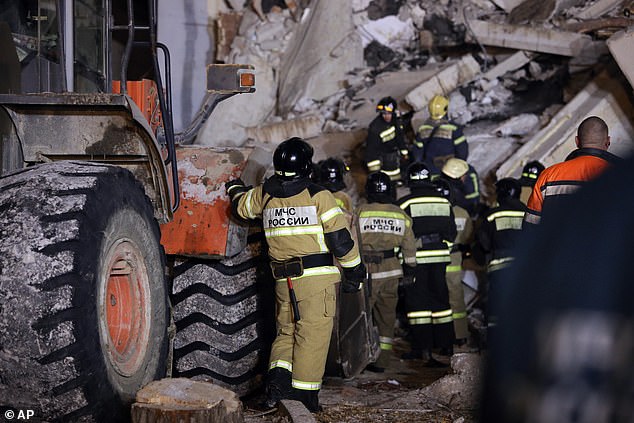 Nine bodies have been pulled from the ten storey apartment block wreckage. Six were brought out alive, including two children. The fate of at least 32 residents in the block is unknown but most are feared dead in temperatures as low as minus 23C

‘Almost the whole city centre is cordoned off,’ said an eyewitness.

‘There are a lot of OMON, cars of Investigative Committee, firemen and ambulances.’

Talgat Almurzeev posted in Vkontakte social media: ‘I am standing in front of block 91\1 on Lenina Street – lots of Gazel and other police cars here.

‘Plus two buses with people and there are people in helmets and armed vests around.’

The incident came as the region officially began a day of mourning for the dead in the New Year’s Eve incident.

Nine bodies have been pulled from the ten storey apartment block wreckage. Six were brought out alive, including two children.

The fate of at least 32 residents in the block is unknown but most are feared dead in temperatures as low as minus 23C.

The perilous condition of the building means bodies have not been cleared but yesterday morning an 11-month-old baby boy was miraculously found alive in the carnage.

Around 100 detectives have been sent to the city by the Investigative Committee (IC) which is seen as similar to the FBI.

TASS reported three people died when a minivan caught fire in Magnitogorsk. The FSB and IC are working at the site.

Two tanks with ‘gas’ were in the minivan, say reports.

The Gazel incident came soon after Vladimir Putin had thanks emergency forces for their work after the New Year’s Eve incident.

Shortly before midnight on New Years’s Eve, Putin visited the site of what was believed to have been an explosion caused by a gas leak.

Dele Alli's mannequin girlfriend Ruby Mae flaunts her bikini physique as she soaks up the solar in I...
Crystal Palace must find a cutting edge, warns Andros Townsend
JACK DOYLE on the French President's Brexit hand grenade
Boyfriend gave police false name after he crushed Alfie Lamb to death
May restarts Brexit talks with Labour after calls for 'compromise' despite Tory fury at 'surrender'
Lost for words: A glorious elegy for the richly beautiful but vanishing language of rural Britain
How Beijing built a top-secret nuclear plant '816' in the world's largest man-made cave
How an Indian guru taught me the life-changing power of giving, says philanthropist Marc Benioff