One woman in her 20s was shot at a nightclub in Dalston, East London, while a drunken thug in the West Midlands attacked a partygoer with a 2ft sword.

Elsewhere, Sussex Police Chief Inspector Roy Hodder said his force managed more than 100 emergency calls an hour between midnight and 3am this morning. 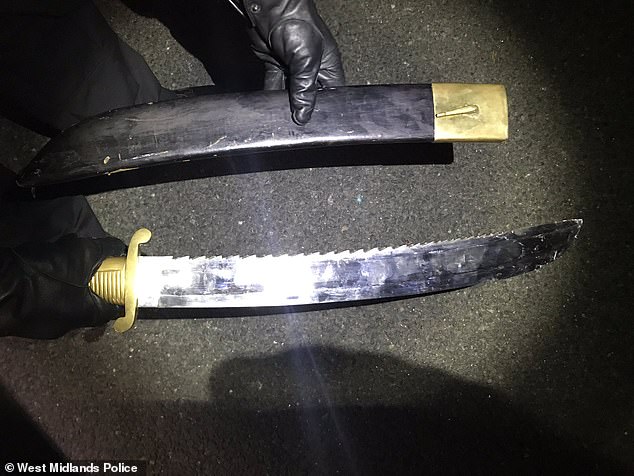 ‘Reflection – the absolute number of violent/aggressive drunken idiots who 10, 15 years ago feet wouldn’t have touched ground on way to custody – now simply tolerated.

‘Reason – we simply hadn’t got the officers to do anything else. Arrests inevitably take officers away for hours these days and we can’t afford to lose them.

‘The line of what constitutes acceptable behaviour is pushed further and further to make ends meet.’

He spoke out after a drunken thug was arrested on suspicion of attacking a woman with a 2ft-long sword at a New Year’s Eve party in the region. 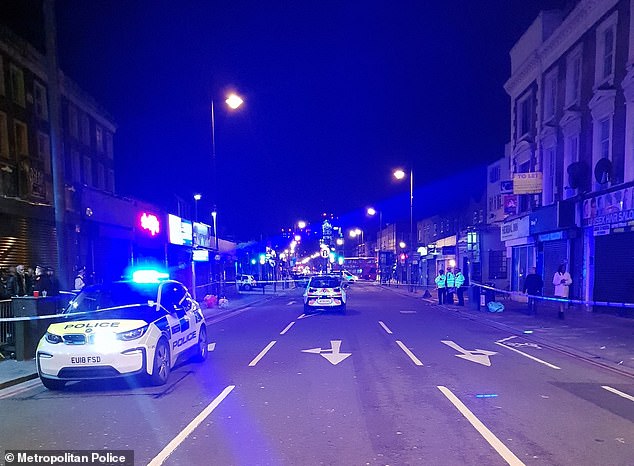 Police cars at the scene following the shooting at 5am this morning in Dalston, East London

Mr Cooke tweeted a picture of the ‘fearsome’ weapon, saying it had been discarded in the bushes outside a party – and the suspect was in custody.

Earlier in the evening in the West Midlands region, two people were robbed of their phones by three thugs who threatened them with machetes.

Meanwhile in East London, a woman in her 20s was taken to hospital with a bullet wound to her leg following a shooting at about 5am this morning.

Metropolitan Police officers have closed local roads, but the woman’s injuries are not believed to be life threatening. No arrests have been made.

A Scotland Yard spokesman said: ‘Police were called to a nightclub on Kingsland Road in Hackney, at 5am on Tuesday, January 1 following reports of a shooting. 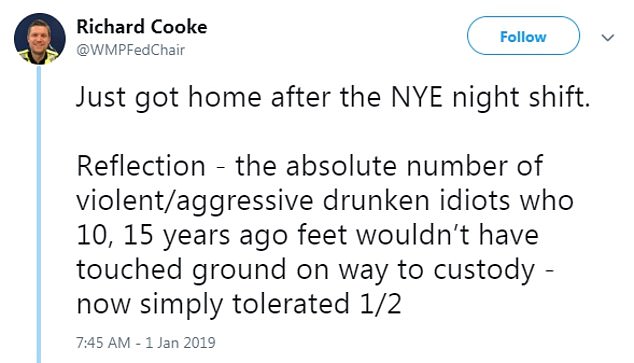 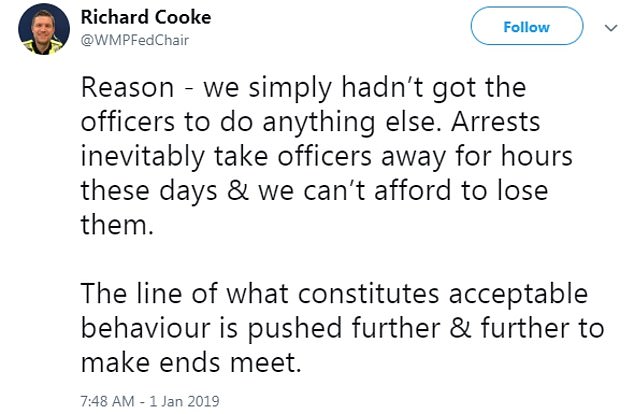 ‘Officers and the London Ambulance Service attended. A woman, believed to be aged in her mid-20s, was found with a gunshot wound to her leg.

‘She was treated at the scene by paramedics and then taken to hospital. Her injuries are not believed to be life-threatening. There has been no arrest. Enquiries continue.’

Kingsland Road is a popular stretch of the A10 road at night – with bars, shops and restaurants running along a section which takes about 20 minutes to walk along.

Separately, counter terrorism police are leading an investigation after a .

Two commuters – a man and woman in their 50s – were taken to hospital with knife injuries and a British Transport Police officer was stabbed in the shoulder.