The White House slapped back at suggestions on Monday that the president was not in the Oval Office working when he said that he was in a morning tweet.

The Marine sentry who stands guard outside the West Wing whenever the president is in it was not as his post, suggesting the president was elsewhere.

Deputy press secretary Hogan Gidley said in an afternoon tweet that Trump was, in fact, in the Oval Office, even though a Marine was not standing guard outside.

‘I just looked into the Oval Office myself, and @ was in fact sitting behind the Resolute Desk working,’ he said.

The Marine sentry who stands guard outside the West Wing whenever the president is in it was not as his post, suggesting the president was elsewhere 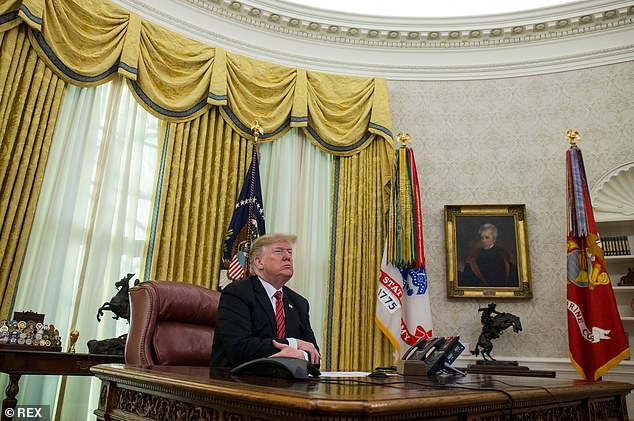 Sources inside and outside the White House have been unable to explain to DailyMail.com where the Marine, who is on a four-man rotation, has been over the past week.

On several occasions over the holidays when Trump claimed to within, the Marine was not standing outside, including on Monday morning when Trump tweeted to say he was ‘in the Oval Office’ waiting for Democrats to approve the funding for his border wall.

A 10:37 am tweet said: ‘I’m in the Oval Office. Democrats, come back from vacation now and give us the votes necessary for Border Security, including the Wall. You voted yes in 2006 and 2013. One more yes, but with me in office, I’ll get it built, and Fast!’

White House reporters posted photos of the West Wing entrance and noted that the Marine was missing.

Marine sentries guarding the West Wing normally rotate through their shifts every half hour when Trump is his office and have done so for the last decade. No one could explain to DailyMail.com on Monday why they have not been seen at their posts for more than a week.

Reporters use the Marine to track the president’s comings and goings from the Oval Office to the residence and other locations off the White House grounds.

Days before, when the Marine was not at his post all morning, journalists suspected the president has made a covert trip to an American outpost overseas.

The president and his wife were in Iraq on a secret visit to Al Asad Airbase.

Gidley insisted on Monday that Trump was not only in the United States but at his desk working, though, when he said he’d seen the president with his own eyes in a 12:50 pm tweet bashing reporters who did not inquire to the press office about the president’s whereabouts.

Trump has not been seen in public since he dined at the vice president’s residence on Friday night. The last time he was seen in the Oval Office by journalists was on Christmas Day.

Twice on Christmas Eve the president claimed he was in the Oval, even though the West Wing Marine was not outside at the time of his tweets.

He claimed in one that he was was receiving a briefing on North Korea, as he sent out a photo of himself and two specialists in the administration who work on that issue area.

Another tweet said: ‘I am in the Oval Office & just gave out a 115 mile long contract for another large section of the Wall in Texas. We are already building and renovating many miles of Wall, some complete. Democrats must end Shutdown and finish funding. Billions of Dollars, & lives, will be saved!’

The president claimed in a Saturday morning tweet that he was ‘in the White House waiting for the Democrats to come on over and make a deal on Border Security’ as he mocked reports describing them as giddy to investigate him.

That tweet notably stated that he was at the White House complex and did not claim that he was in the Oval Office.

Woman who ordered more than $1,600 in Girl Scout cookies for her daughter's troop is arrested
Top Pentagon spokeswoman steps down after she's investigated for misconduct and abuse of power
Meghan Markle baby shower video reveals 'dessert buffet'
YouTube pledges to remove videos promoting extreme views, misinformation
King of Clay strikes again! Rafael Nadal turns on the style to win a record 12th French Open title
Woman is dragged to death in hit-and-run on Long Island
Trump's 'proposal to nuke hurricanes' was considered by the US government in the 1950s
Ultrasound footage shows rare black rhino calf moving around in its mother's womb