A Frenchman has been arrested after sparking a terror scare at Barcelona’s Sagrada Familia when he was caught carrying five handgun magazines for a 9mm pistol.

A small dagger and a ‘semiautomatic knife’ are also thought to have been discovered in a rucksack he was carrying when he tried to get into the city centre temple.

Police are said to have found a weapon with its series number erased in his car, which was parked nearby.

The man, understood to be a soldier, was being held this morning in police cells ahead of a behind-closed-doors court appearance. The arrest happened just before 5.30pm yesterday. 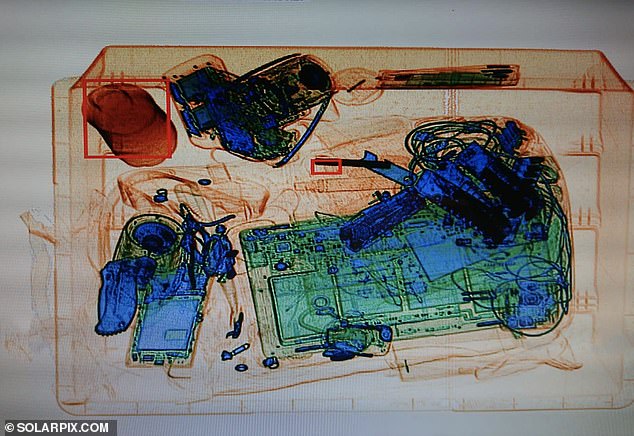 A French soldier has been arrested after sparking a terror scare at Barcelona’s Sagrada Familia when he was caught carrying handgun ammunition and a knife. Pictures show a scan of some of his belongings 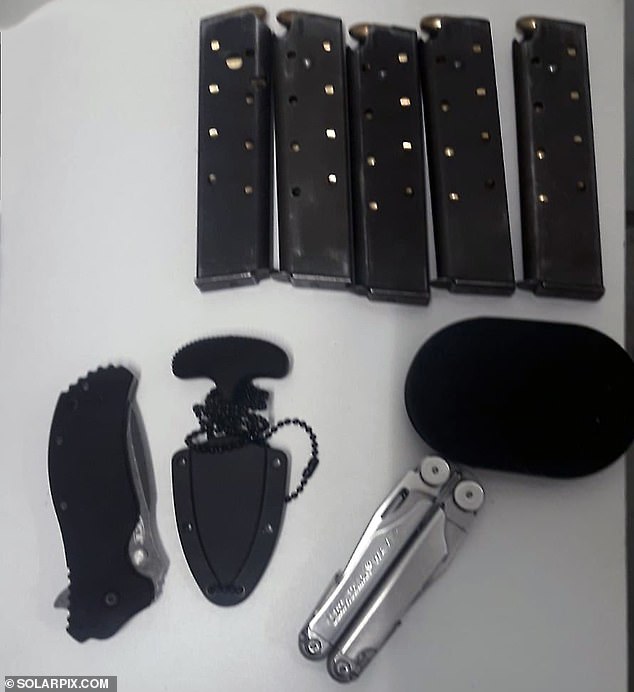 Sagrada Familia security guards alerted cops after detecting the munition in a rucksack as the Frenchman passed through a metal detector on his way into the Gaudi-designed temple, one of the intended targets of the terrorists behind the August 17 2017 Las Ramblas massacre.

Local reports said Spanish authorities had confirmed he was a soldier after he claimed he had been doing shooting practice in the south of France and left the magazines in his rucksack by mistake.

The detainee, who was with his girlfriend, is said to have cooperated fully with police.

A spokesman for the regional Mossos d’Esquadra said he was unable to confirm reports the Frenchman was a soldier or the possibility he was planning a terror attack had been ruled out because the investigation ‘remained open.’

He said: ‘The investigation remains open. All I can confirm at this stage is a man has been arrested in the vicinity of the Sagrada Familia.

‘He is currently in police custody. He can be held for up to 72 hours so he could go before a judge today or tomorrow.

‘He was arrested on suspicion of illegal possession of weapons.’

Last week it emerged police in Barcelona had been warned a Moroccan man could carry out a terror attack on Christmas Day.

Officers were told the Casablanca-born terrorist may try to commit a spectacular massacre in the Catalan capital using a coach or similar type of vehicle. 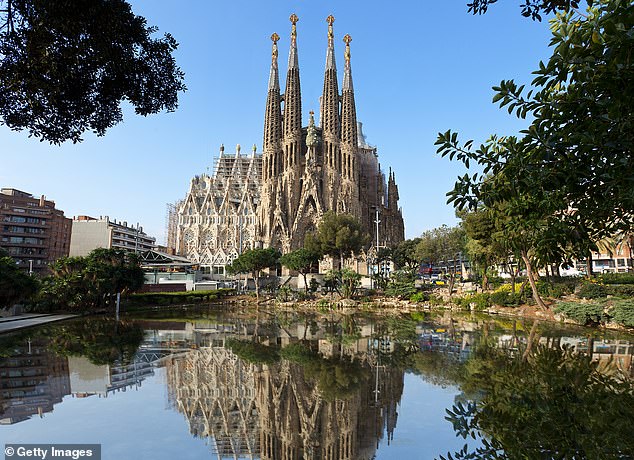 Sagrada Familia security guards alerted cops after detecting the munition in a rucksack as the Frenchman passed through a metal detector on his way into the Gaudi-designed temple (file picture), one of the intended targets of the terrorists behind the August 17 2017 Las Ramblas massacre

The terror warning was highlighted by several Spanish papers on Christmas Eve who said they had seen an internal alert sent to regional Mossos d’Esquadra officers.

The revelation surfaced after the US state department tweeted: ‘Spain. Exercise heightened caution around areas of vehicle movement including buses in the Las Ramblas area of Barcelona during Christmas and New Year.

‘Terrorists may attack with little or no warning, targeting tourist locations, transportation hubs, and other public areas.’

He said in a radio interview: ‘It’s one more of those we receive. No doubt this case is a little different because of the US State Department tweet.

‘All are investigated and worked on thoroughly. This is one more.’

More than 130 people were injured.

Police shot dead Younes in vineyards in Subirats an hour’s drive west of Barcelona after he went on the run following the Barcelona massacre. He was later buried in an unmarked grave in a funeral held in secret in his homeland.

The terrorists behind the deadly Barcelona attack, and another hours later in nearby Cambrils, had planned to use butane gas cylinders to blow up iconic landmarks including the Sagrada Familia.

More than 20 butane gas canisters were found intact in the wreckage of their bomb factory.

Traces of triacetone triperoxide, a peroxide-based explosive known as TATP or the Mother of Satan which police believe the terror gang were going to use to detonate the gas, were also discovered.

Heather Locklear is ‘climbing the partitions’ in rehab
Catherine Oxenberg reveals it was 'hell' to rescue her daughter India from 'sex slave cult'
Woman, 25, paralyzed while trying to escape sex attacker finishes New York City marathon on crutches
Shocking footage shows the seconds before the Shoreham air crash
Trump tells Americans not to travel to Venezuela and credits U.S. sanctions for Maduro talks
Detroit firefighters pose and smile for a NYE photo in front of a burning home
Employers share the most brazen questions job candidates have asked at the end of their interviews
FBI finds Saudis 'almost certainly' helps their citizens escape prosecution in US for serious crimes