A Minnesotan reporter for the Washington Post shared a comically thrilling tale on Saturday of his encounter with mass crickets.

Christopher Ingraham, from Red Lake Falls, that it was his first time ordering live crickets in bulk for the family’s new pet, a bearded dragon named Holly.

The data reporter added that he had ‘naively assumed that they would be in like, a bag or some other contraption to facilitate easy transfer to another container.’

So it came as a bit of a shock when company Fluke Farms sent the 250 crickets that Ingraham ordered in a cardboard box. 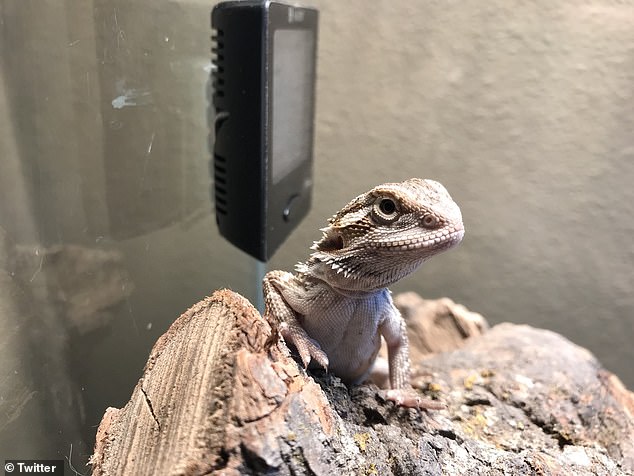 Christopher Ingraham, from Red Lake Falls, posted that it was his first time ordering live crickets in bulk for the family’s bearded dragon Holly 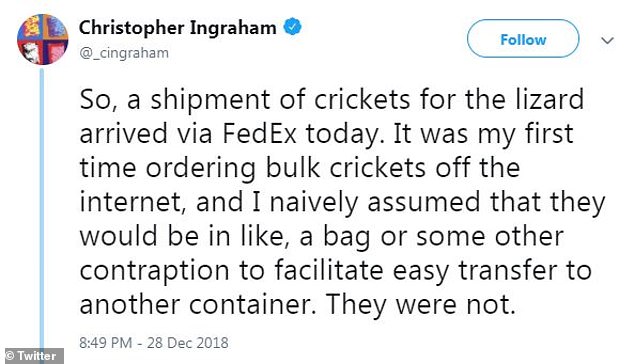 Ingraham would later add to the story, in a article, that the package had been delayed due to a severe blizzard and wasn’t delivered next day as he had hoped.

He added: ‘I cut the tape and opened the box and SURPRISE! Crickets everywhere. It was the middle of the workday and I didn’t have time to deal with cricket logistics, so I put the tape back on the box.’ 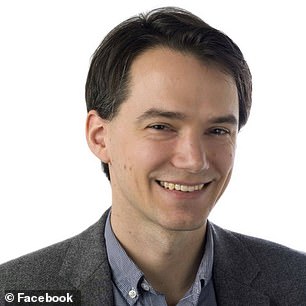 The father would temporarily store the box in the upstairs bathroom in an effort to save the insects from his curious children, dogs and cats.

‘About 20 minutes later I’m back at work on my computer, and I hear my wife in the kitchen: “where are these goddamn crickets coming from.” I freely admit I had not kept her fully up-to-date on my cricket purchasing plans,’ he said.

‘And at first I was like “okay, maybe one or two got out when I initially opened the box. No biggie.” I kept working.’

But soon the reporter would realize that was wishful thinking.

He added: ‘I’m trying to wrap up a story but I keep hearing cricket-related exclamations coming from the kitchen. Eventually I get up to investigate. I say, “So uh the crickets got here toda–“

‘”I REALIZE THAT,” she says. “WHY ARE THEY ALL OVER THE KITCHEN”

‘I say “That’s a good question. Let me check something.” I walk over to the bathroom. I open the door. There are crickets. Everywhere.’ 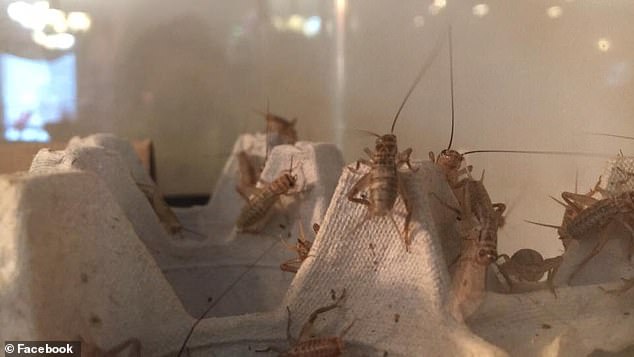 Crickets covered almost every crevice of the bathroom and Ingraham’s first instinct: to flush the toilet.

‘As if that will do anything to solve the problem of crickets in all the other places that were not the toilet,’ he said. ‘I shut the door. “Uh, don’t come in here!” I try to sound cheerful.’

It finally dawned on Ingraham that he hadn’t closed the box well.

‘I ended up rushing out to the shed, in the 18″ of snow and below zero temperatures, to pick up a spare aquarium we had,’ said the reporter. ‘I spent about 45 minutes collecting crickets from the bathroom.’ 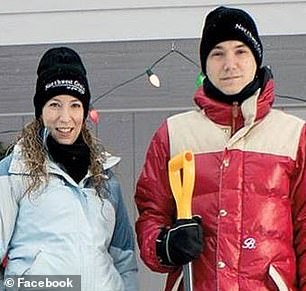 Ingraham shared his true motives for telling the story, and of course it was as a means of his own survival. ‘I make this information public because if I do not send any tweets tomorrow, it is because my wife murdered me after finding a cricket in our bed in the middle of the night,’ he said

But by then, the crickets had migrated just about everywhere else: headed towards the playroom, in shoes, in closets and keeping the cats thoroughly entertained.

‘I tried to collect all of them,’ he admitted. ‘It was like the world’s shittiest game of Pokemon. But here we are, roughly 10 hours after the initial catastrophe, and stray crickets are still turning up in odd places.’

Ingraham shared his true motives for telling the story, and of course it was as a means of his own survival.

‘I make this information public because if I do not send any tweets tomorrow, it is because my wife murdered me after finding a cricket in our bed in the middle of the night,’ he said.

The reporter would later add, for his doubters, that ‘while a horde of crickets was marauding through my house I did not think to whip out my phone and start snapping pics.’

Since the wild incident, Ingraham has shared that the house is back under control but that he occasionally hears chirping in the bathroom.