launched a devastating attack in Libya within days of US President declaring victory over the terrorist group.

Details of the Day atrocity emerged only last night. It began when a car bomb was driven into the foreign ministry in the capital, Tripoli. Three armed jihadis ran inside, where two detonated suicide vests and the third was killed in a gunfight with ministry guards.

Responsibility for the attack, which left three ministry workers dead and ten injured, was claimed by Isis through Amaq, its propaganda website, which boasted of striking at the heart of the Libyan government. 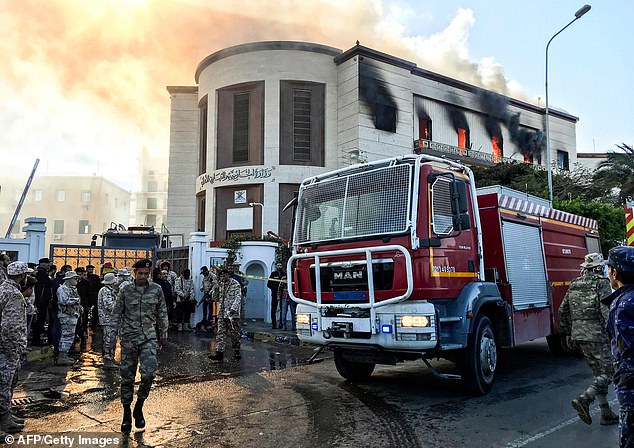 Atrocity: Emergency services at Libya’s foreign ministry after the attack. Details of the Christmas Day atrocity emerged only last night

After the atrocity, Libyan foreign minister Mohamed Sayalah pleaded with the international community to lift an arms embargo imposed on the country by the United Nations since 2011. ‘We need weapons to combat terrorism,’ he said. ‘The Libyan people are fighting terrorism on behalf of the world.’

President Trump sparked controversy earlier this month when he announced that US troops were being withdrawn from Syria because Isis had been ‘defeated’.

Britain was among several countries to criticise the move, and US Defence Secretary James Mattis resigned, saying Mr Trump should appoint someone ‘whose views are better aligned with yours’.

Critics will cite the renewed violence in Libya as evidence that the threat posed by Isis has not been extinguished.

The terror group was driven from Sirte, the stronghold of former Libyan President Muammar Gaddafi, in 2016 and later routed in Raqqa, their de facto headquarters in Syria.

But experts have warned that the Islamic extremists could retreat to a lawless Libya riven by civil war and regroup. 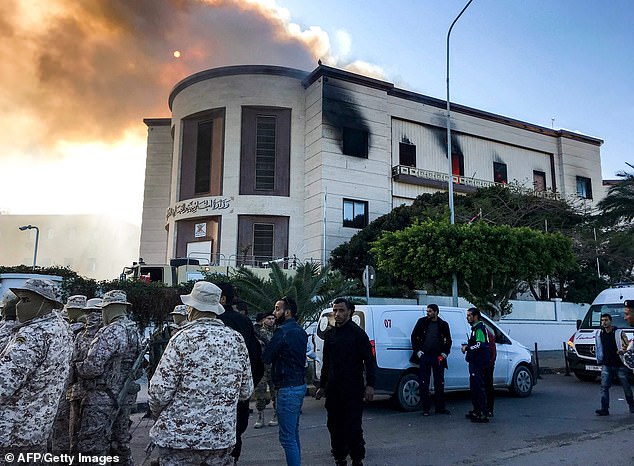 Efforts to establish a viable Libyan leadership have failed, with the UN-recognised Government of National Unity in Tripoli vying for power against forces loyal to ex-Gaddafi enforcer Khalifa Haftar in Tobruk in the east of the country.

A planned presidential election was abandoned earlier this year because of security concerns. A vote is scheduled for 2019, with Haftar likely to gain support from Russia, whose defence minister he met in Moscow last month.

However, Gaddafi’s second son, Saif al-Islam, has also said that he might stand, despite facing International Criminal Court charges of crimes against humanity.

The announcement prompted Russia’s Middle East envoy to claim that the 46-year-old, who gained a PhD from the London School of Economics, ‘could become a unifying figure’.

Trump tried to change his sick father's will so he could use dad's empire for collateral
Florida man charged with attempted felony murder after firing seven shots at repo men taking his car
Kenzo celebrates his 80th birthday with a VERY lavish party in Paris
Refugee is found hiding in car's GLOVE box in a desperate attempt to sneak into Europe through Spain
Cats movie trailer: Claws come out on social media for first official look
New York neighborhood where coronavirus lawyer lives has quarantined itself but aren't panicking
Donald Trump ignored social distancing at coronavirus relief bill signing
Black man 'stabbed AutoZone employee because he felt the need to find a white male to kill'