The will broadcast its new talent show at the same time as ITV’s The Voice – defying Government calls for the Corporation not to put its major programmes head-to-head with those of its rivals.

The Greatest Dancer, produced by ’s Syco Entertainment company, begins at 8pm next Saturday on BBC1 just as The Voice starts on ITV, meaning licence fee payers will be denied the chance to watch both shows live.

The Mail on Sunday understands that talks between BBC and ITV executives to avert the clash failed, setting up not only a ratings war but a potential run-in with Ministers. 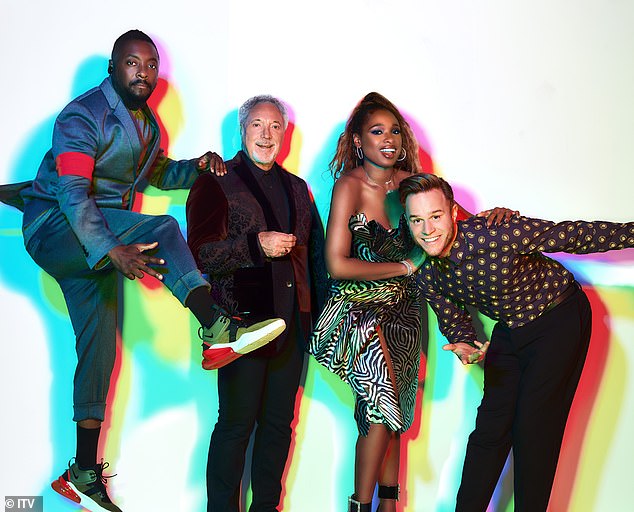 The Voice will be presented by Emma Willis with a judging panel comprising will.i.am, Olly Murs, Jennifer Hudson and Sir Tom Jones

Earlier this year, it emerged that as part of the review of the BBC’s charter, the then Culture Secretary John Whittingdale tried to stop the Corporation pitting its top shows against hit programmes on rival channels.

Last night, Ed Vaizey, who as Culture Minister was involved in those talks, said: ‘We worked very hard to ensure that viewers were given a fair chance to have a choice of what they watched because we believed that, by putting their big programmes on against those on commercial channels, the BBC were denying them that.

‘We tried for tougher rules too, so that the BBC couldn’t deliberately undermine commercial channels by trying to clash and take on their biggest shows because obviously they have a right to sell as much advertising as possible.’

Cowell was not involved in the scheduling, but is understood to be ‘excited’ that his new show will compete directly with The Voice.

The 59-year-old was irritated in 2012 when The Voice, which ran on the BBC for five series before defecting to ITV, was pitted directly against his Britain’s Got Talent series on the commercial channel.

It led to a war of words, with each channel accusing the other of ‘parking a tank on its lawn’. An insider said: ‘It is a happy coincidence for Simon that this has happened. He loves a challenge and is excited at The Greatest Dancer launching.’

The BBC have lavished millions on The Greatest Dancer. It will be presented by Alesha Dixon (pictured) and Jordan Banjo

The BBC have lavished millions on The Greatest Dancer after putting the concept for a new dance talent show out to tender. The eight-part series aims to uncover the best dancers from a variety of styles including ballet, Bollywood and tap.

It will be presented by Alesha Dixon and Jordan Banjo, who won Britain’s Got Talent in 2009 as part of dance troupe Diversity.

The Voice will be presented by Emma Willis with a judging panel comprising will.i.am, Olly Murs, Jennifer Hudson and Sir Tom Jones.