Three young siblings were killed and their mother was hospitalized after she tried to save them from a house fire early on Friday in a small southern Indiana city, officials said.

Firefighters arrived to find ‘fire shooting from almost every window on the ground floor,’ he said.

The children’s mother, Selina Applegate, had tried unsuccessfully to get the siblings out of the home.

Applegate and two other children escaped the blaze with non-life-threatening injuries, and one of the children called 911 about 3.25am Central. 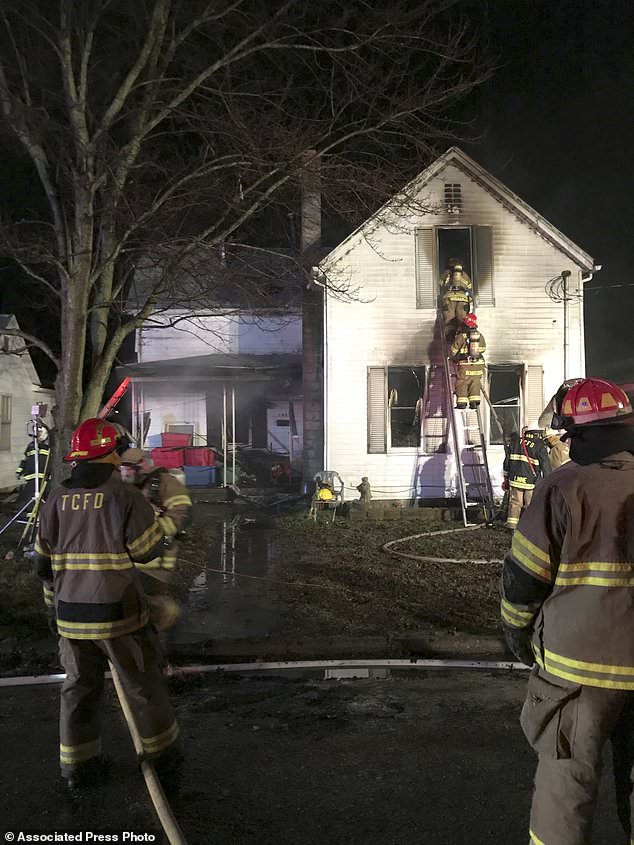 Danielle Plock Sims, 11, Thomas Plock Sims, 6, and Roseanna Plock Sims, 3, died in a house fire in Indiana early on Friday after their mother, Selina Applegate, was unable to save them. In this photo provided by the Indiana Department of Homeland Security, firefighters work to extinguish the deadly fire on Friday in Tell City, Indiana

‘I’m not sure how she escaped,’ Tell City Police Chief Derrick Lawalin said of Applegate, who was hospitalized in fair condition.

‘We do understand there were efforts made by her to reach her children.’

The Indiana State Fire Marshal is investigating the cause of the fire in the Ohio River city about 70 miles (110 kilometers) southwest of Louisville, Kentucky.

Hours after the fire, a small memorial that included an angel and a teddy bear had been erected next to a tree outside the fire-gutted house.

‘Last night the community lost three wonderful children, full of potential. Our thoughts and prayers are with the family in this trying time,’ Tell City-Troy Township Schools said in a statement.

It said counselors and social workers were available for anyone affected by the fire that occurred just three blocks from Tell City Junior Senior High School.

Tell City Mayor Jim Adams called on the community of about 7,300 to support the family during the tragedy, coming only days after Christmas.

‘This is supposed to be a joyous time,’ he said. ‘I want to let everybody know we, as a city, we want to just wrap our arms around these family members because we want them to know they’re not alone.’

Experts warn next recession will hit US within two years will be 'worse than the Great Depression'
Celebrities react to Brett Kavanaugh Supreme Court Justice confirmation
Failed stock trader, 45, 'tried to frame daughter, 9, for wife's murder'
Juror passes out as gory photos shown during Rod Covlin murder trial
Jeff Bezos did not pay $3M to rent the world's largest charter yacht for a WEEK
Colin Kaepernick wore a 'Kunta Kinte' T-shirt at his NFL tryout
Four security guards at Dresden's Royal Palace are suspected of involvement in jewellery raid
Sicily will PAY half the price of tourists' flights in bid to lure back holidaymakers after lockdown