After President Trump claimed that federal workers are behind him, saying many have told him ‘stay out until you get the funding for the wall,’ union bosses have denied his claim said many employees are worried about losing their homes because of the government shutdown.

Around 800,00 people have been effected by the shutdown which was on its sixth day Thursday, and many people concerned they will not be able to feed their children, and that falling behind on bill payments will affect their future.

One union boss said in response to the American leader’s claim – which without an explanation – that people were anxious to known when it would end. 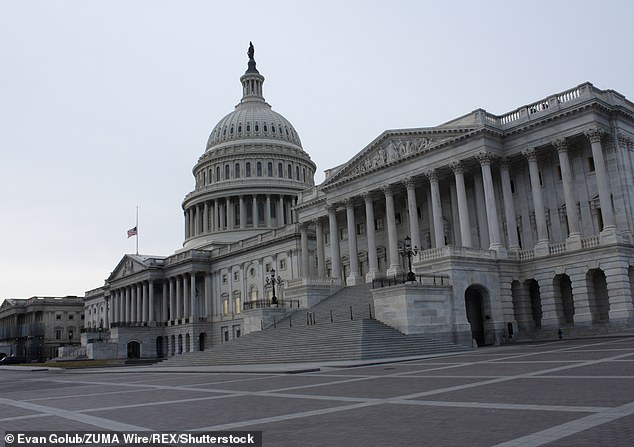 The Capitol Dome is seen from the Russell Senate Office Building in Washington DC, pictured during a partial government shutdown 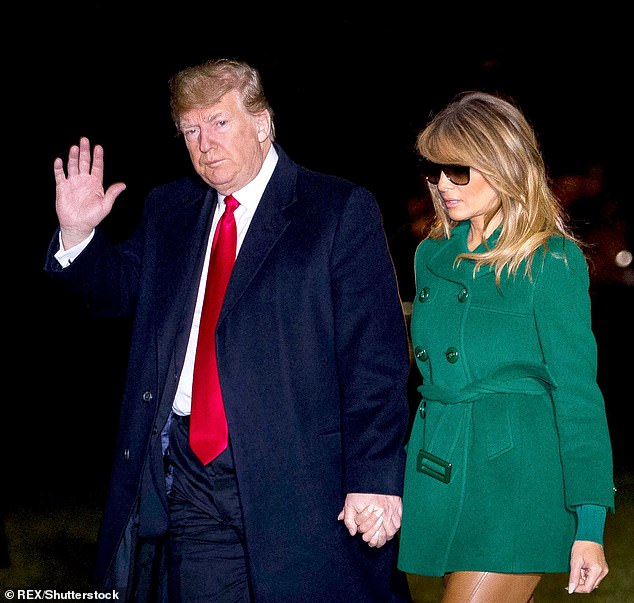 President Donald J. Trump and First Lady Melania Trump make their way across the South Lawn of the White House on Thursday. Trump claimed that federal workers are behind him

He said he hasn’t heard from any employees who say they support the shutdown and warned that financial problems now could negatively effect government employees in future.

Missed payments could stop them from getting security clearance when applying for future jobs.

David Dollard, a Federal Bureau of Prisons employee and chief steward for the American Federation of Government Employees Local 709 union in Colorado, added that at least two agency employees lost their homes after the 2013 shutdown.

With his agency already understaffed they are some of the 420,000 workers deemed essential and forced to work unpaid, unable to take any sick days or vacation.

An additional 380,000 are staying home without pay. 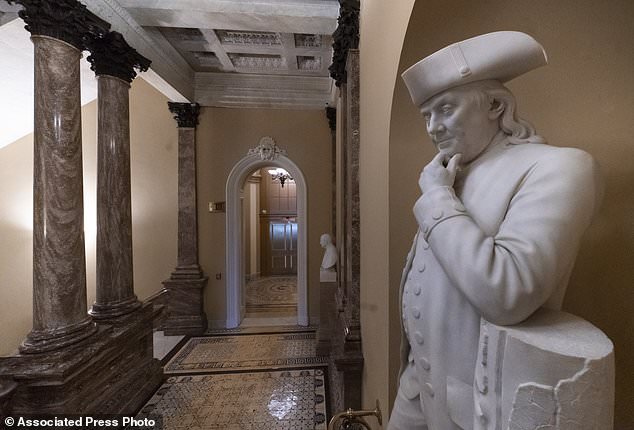 A statue of Benjamin Franklin is seen in an empty corridor outside the Senate at the Capitol. Chances look slim for ending the partial government shutdown any time soon

‘You start out at $44,000 a year, there’s not much room for anything else as far saving money for the next government shutdown, so it puts staff in a very hard situation,’ Dollard said. ‘We’ve got single fathers who have child support, alimony. It’s very hard to figure out what you’re going to do.’

While furloughed federal workers have been given back pay in previous shutdowns, it’s not guaranteed.

The Senate passed a bill last week to make sure workers will be paid. The House will probably follow suit, the Associated Press reported.

‘Unfortunately, 800,000 federal workers are in a panic because they don’t know whether they’ll get paid,’ said Representative Jim McGovern, a Massachusetts Democrat, who tried to offer the bill. ‘That may make the president feel good but the rest of us should be terribly bothered by that, and should work on overtime to end the shutdown now.’

The office worker at the Interior Department said: ‘I live check to check right now. I’m getting nervous.’

James said the contracting company he works for gave its employees a choice: take unpaid leave or dip into paid time-off entitlements. But James doesn’t have any paid time off because he started the job just four months ago. His only option is forgoing a paycheck.

‘This is my full-time job, this is what I was putting my time into until I can save up to take a few classes,’ the budding teacher said. ‘I’m going to have to look for something else to sustain me.’ 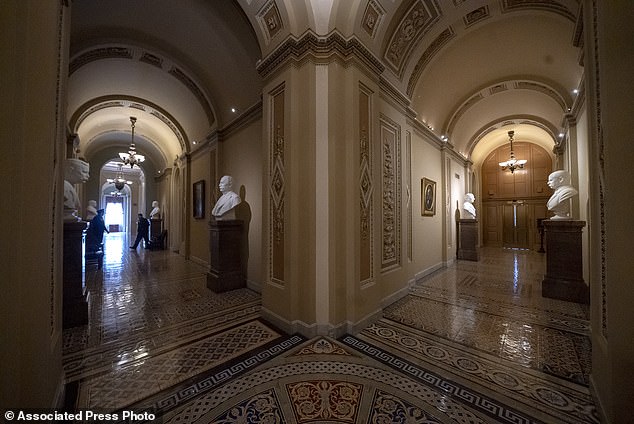 Empty corridors around the Senate are seen at the Capitol Thursday. Lawmakers are away for the holidays and have been told they will get 24 hours’ notice before having to return for a vote

Candice Nesbitt, 51, has worked for 1 ½ years for the U.S. Coast Guard, the only branch of the military affected by the shutdown. About 44,000 Coast Guard employees are working this week without pay; 6,000, including Nesbitt, have been furloughed.

Nesbitt worked for a contractor but took a pay cut in exchange for the stability of a government job. She has a mortgage, is the guardian of her special needs, 5-year-old grandson, and makes about $45,000 a year, she said. Any lapse in payment could plunge her into debt. ‘It shakes me to the core,’ she said.

Mary Morrow, a components engineer on contract for NASA, is in the same predicament. In addition to caring for a family largely on her own, she’s got a mortgage.

‘I have three teenage boys, it’s near Christmas time and we just spent money, there are credit card bills and normal bills and it’s really nerve-wracking,’ she said. ‘It’s scary.’

President Donald Trump has made a seemingly unfounded claim that the shutdown over his border wall mostly affects Democrats.

He spent part of the day tweeting about the shutdown, insisting ‘this isn’t about the Wall,’ but about Democrats denying him ‘a win’.

‘Do the Dems realize that most of the people not getting paid are Democrats?’ he asked in one tweet. 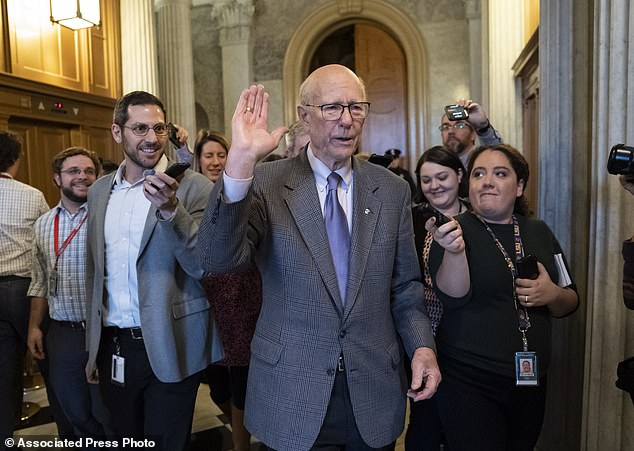 With reporters seeking comment, Republican Senator Pat Roberts of Kansas, chairman of the Senate Agriculture Committee, departs after he opened and closed a brief session of the U.S. Senate amid the partial government shutdown, at the Capitol in Washington, Thursday

House Democrats tried Thursday to offer a measure to re-open government, but they were blocked from action by Republicans, who still have majority control of the chamber until Democrats take over January 3.

The House and Senate gaveled in for a perfunctory session Thursday, but quickly adjourned without action. No votes are expected until next week, and even that’s not guaranteed.

Lawmakers are mostly away for the holidays and will be given 24-hour notice to return, with Republican senators saying they won’t vote until all parties, including Trump, agree to a deal.

It has already caused a lapse in money for nine of 15 Cabinet-level departments and dozens of agencies, including the departments of Homeland Security, Transportation, Interior, Agriculture, State and Justice.