A roadside bomb has struck a tourist bus near the Giza Pyramids, killing at least two people.

There were conflicting reports on the nationality of the victims, with one source saying an Egyptian died while another said two Vietnamese visitors had been killed.

The bus was reportedly carrying 14 tourists near the ancient monuments in the north of the country.

A picture from the scene showed the side of the bus ravaged by the explosion, near the country’s historic landmarks. 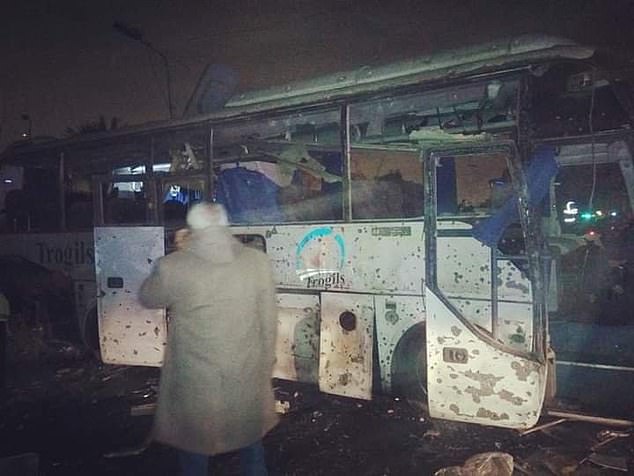 A roadside bomb has struck a tourist bus near the Giza Pyramids, killing at least two people

Officials said the bus was travelling in the Marioutiyah area near the pyramids on Friday when the roadside bomb went off.

No group immediately claimed responsibility for the attack and it was not clear whether the vehicle had struck the bomb or whether it was launched from the side of the road.

Egypt has battled Islamic militants for years in the Sinai Peninsula in an insurgency that has occasionally spilled over to the mainland, hitting minority Christians or tourists.

However, this is the first attack to target foreign tourists in almost two years.