This is the moment a Husky howls in protest when his owner tries to bathe him in a paddling pool.

One-year-old Piggy has still been unable to get used to the weekly bath given to him by owner Bom Wattana, 31, at their home in Nonthaburi, .

Mr Wattana even strips down to his swimming trunks and joins the pooch in the water to try and encourage him. 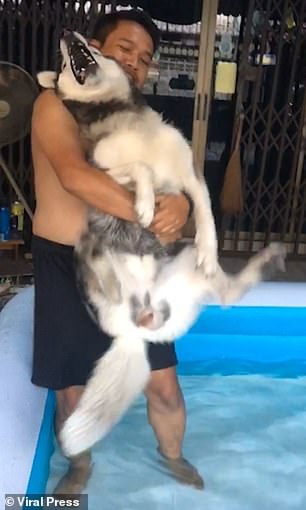 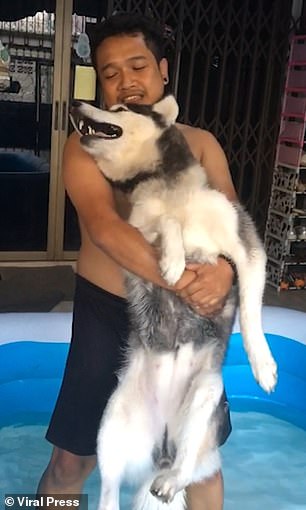 One-year-old Piggy the Husky howls (left and right) and lifts his rear legs up to avoid the water during bath time at his home in Nonthaburi, Thailand

Footage shows the grumpy pooch twisting and turning as he tries to avoid the paddling pool full of water on December 6.

Piggy throws his head towards the sky and cries as Mr Wattana holds him above the water.

As he howls he lifts his hind legs and bends his paws to bring them closer together.

Eventually Mr Wattana manages to get Piggy’s back paws into the water but still has to cling onto the nervous dog. 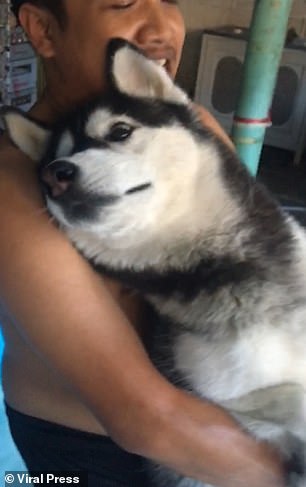 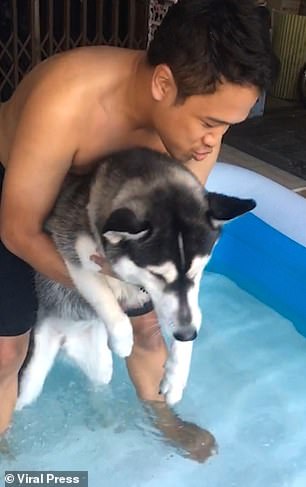 However this doesn’t last for long and after a few seconds Piggy kicks himself up and sprays water over his patient owner.

The next time Mr Wattana plonks the dog into the paddling pool, Piggy resists less and his howls subdue.

Piggy even lets Mr Wattana splash some water onto his chest and keeps all four paws under the water however he still doesn’t look completely comfortable in his bath.