dinner is done, there’s enough turkey left to feed the 5,000 and you never want to see another mince pie as long as you live.

After the gluttony of the big feast, eating again is probably the last thing on your mind. And the thought of cooking — especially using up those mountains of leftovers — is enough to drive you whimpering into a dark room.

But what if I told you there was a quick and easy way to use up those piles of cold roasties, congealed gravy and platefuls of unwanted sprouts? And recipes for every single one of your leftovers to feed the family for the rest of the week — without any more festive fuss, at minimal expense and with absolutely no waste? 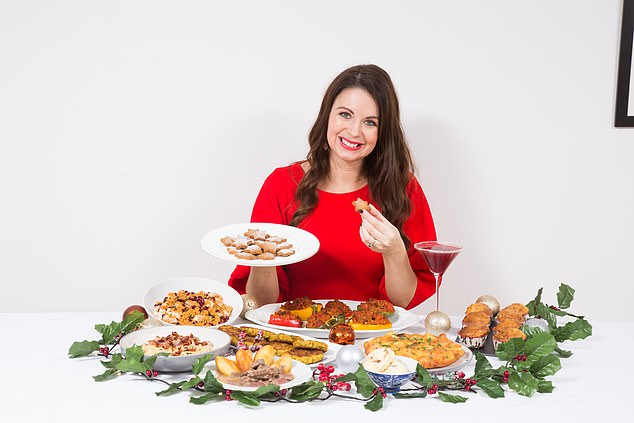 From transforming carrots and parsnips into muffins to turning cranberry sauce into a seasonal cocktail, here’s how to make the most of your leftovers this year… 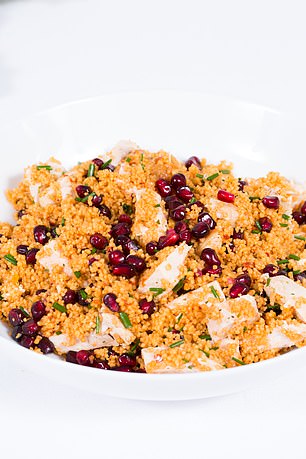 Among the three-ingredient recipes is turkey jambalaya – which includes turkey, couscous and pomegranate seeds

METHOD: Cook the couscous according to packet instructions. This usually involves soaking it in water or stock until the grains puff up and soften.

Jambalaya — a one-pot American dish, traditionally made with rice and chicken — works well hot or cold.

If you want it hot, heat the turkey in the microwave (make sure the meat is steaming and only reheat it once, to prevent the risk of bacterial growth) before stirring it through the warm couscous. If cold, let the couscous cool first.

Finally, stir half the pomegranate seeds through the grains and sprinkle the rest on top.

FESTIVE TIP: Turkey can be a very dry meat, so keep it moist as you’re reheating it. Cover it in a layer of stock or leftover gravy so the meat is resting in about half an inch of liquid, and wrap the dish in cling film to keep in any steam.

SERVES: Two to four as a main course, six as a starter.

METHOD: Halve and de-seed the peppers, slicing downwards straight through the stalks. Lay them open side-up in a large baking tray, season and drizzle with olive oil. Roast the peppers for ten minutes at 200c. 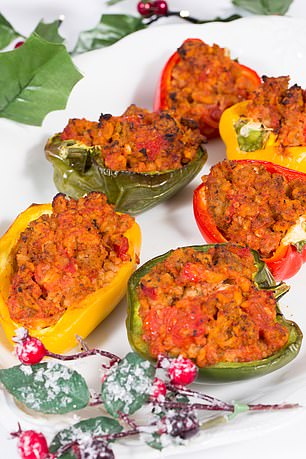 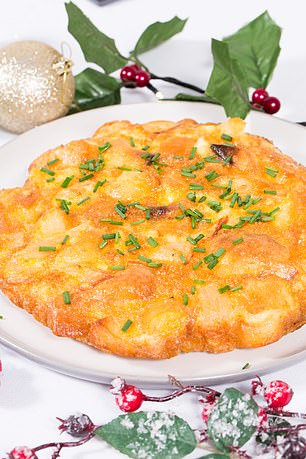 Meanwhile, put the stuffing in a bowl and use a fork to break it up into crumbs. Pour in the chopped tomatoes and mix well to combine.

Once the peppers are roasted, fill each half with the stuffing mixture. Return them to the oven for 20 minutes until bubbling and crisp on top. Serve with fresh salad.

FESTIVE TIP: If you have any leftover Christmas cheese, grate or slice a little on top for the final five minutes of cooking.

METHOD: Roughly chop the potatoes into chunks — keep them quite large, as a tortilla (Spanish omelette) traditionally contains generous pieces of potato.

Lightly whisk the eggs in a bowl and add the potatoes, followed by the salmon, torn into strips. Give everything a good stir.

Heat a little olive oil in a small frying pan and, when it’s just starting to sizzle, pour in the tortilla mix. Cook for 5-6 minutes, transfer the pan to a hot grill and cook for another ten minutes or so until brown on top. Serve hot or cold, sliced into wedges.

FESTIVE TIP: To turn this into a breakfast, slice the potatoes thinly and layer alternately with strips of smoked salmon in a small ovenproof dish. Pour the eggs over the top and bake for 15 minutes. 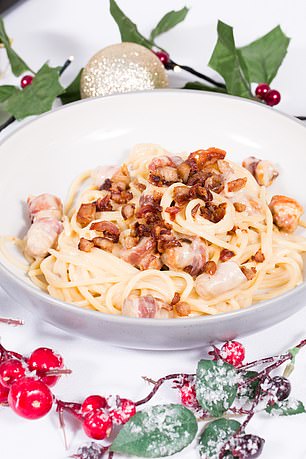 METHOD: Chop 175g of the pigs in blankets into pieces. Very finely dice the remaining 25g and set to one side.

Cook the spaghetti according to packet instructions (around nine to 12 minutes in salted boiling water). Drain and add to a large wok or frying pan with the mushroom soup and chopped pigs in blankets. Heat everything through, adding a little water if you need to thin the sauce, until steaming.

Put the diced pigs in blankets in a small frying pan with a little olive oil and sauté until crispy. Sprinkle these over the tops of your bowls of pasta.

FESTIVE TIP: If you have an overload of pigs in blankets, sausages or bacon, don’t despair. As well as turning them into one-pot pasta, you can add them to pretty much any meal: in scrambled eggs for breakfast, a cheese toastie for lunch or curry for dinner.

METHOD: Chop or finely shred the sprouts (if you’re feeling lazy, a few pulses in a food processor will make this job far easier).

Lightly whisk the eggs in a small bowl and add the sprouts and breadcrumbs. Stir until everything is well combined and not too wet.

Using slightly damp palms, roll the mix into balls and flatten them into fritters roughly 1cm thick. There should be enough for 14-16.

Heat some olive oil in a large frying pan and, once it’s sizzling, add the fritters.

You may need to do it in two batches. Cook for two to three minutes on each side until just turning brown, then flip them over. Serve hot, with fried eggs, fish or white meat.

FESTIVE TIP: This works even if you’ve put bacon, chestnuts, garlic or parmesan in with your sprouts.

METHOD: Puree the carrots and/or parsnips by putting them in a food processor or mashing them together in a bowl. 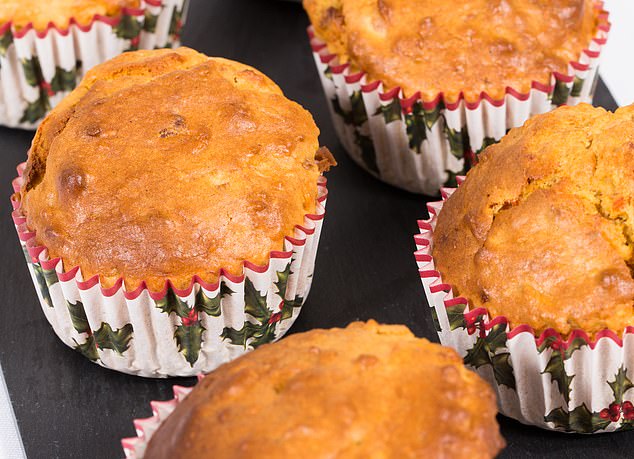 Add the flour and stir through, followed by the ice cream. This may sound bizarre, but ice cream includes milk, fats and sugars, so once melted it behaves like any other cake batter.

Once the muffin mix is smooth, spoon it into six paper cases, arranged in a muffin tray. Bake these until risen and fluffy at 180c for 35 minutes.

FESTIVE TIP: You could also try this with other veg, such as pureed red cabbage or beetroot.

METHOD: Fry the beef for a few minutes in a hot pan until it’s just turning brown. While it sizzles, mix the gravy and sour cream together in a jug — a cheat’s stroganoff sauce — and whisk to get rid of any lumps.

Pour the sauce over the beef and cook for five to six minutes until bubbling. Add a few spoonfuls of water to the pan if it’s too thick for your taste. Serve hot with leftover reheated roasties, rice or noodles.

FESTIVE TIP: You could bulk this recipe out — making enough to feed four people — by dicing leftover Christmas veg (sprouts, carrots or parsnips) and adding them to the sauce along with the beef. It also works well with pork or chicken. 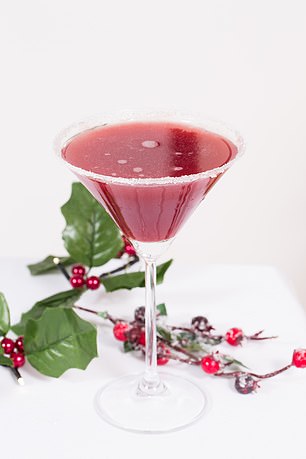 METHOD: Mix the cranberry sauce and vodka together and strain, using either a sieve or a cocktail shaker, to make a smooth red liquid. Put it in the freezer until you’re ready to serve (vodka doesn’t freeze, so there’s no chance it will set). Run a wet finger around the edges of your glasses, tip the sugar on a plate and dip each glass in the crystals to give a frosted rim.

Pour the chilled martini mixture into the glasses and serve, toppedwith a few whole fresh cranberries if you have any.

FESTIVE TIP: Cranberry sauce also makes a lovely chutney with cheese, particularly soft varieties like brie and camembert. Serve it in a pot on your cheeseboard.

METHOD: Crumble the mince pies (or Christmas pud or stollen — all work equally well) into pieces and set to one side.

Whip the cream with an electric whisk for around three minutes until it holds stiff, billowy peaks. Tip the condensed milk into a large bowl and, a spoonful at a time, add the whipped cream and fold together until it’s smooth.

Stir the mince pie pieces into the mixture and transfer it to a loaf tin or freezer-proof container (it makes around half a litre or 1 pint). Cover with wax paper or cling film and freeze for at least six hours.

FESTIVE TIP: If you’re really short on time, buy a tub of good-quality vanilla or chocolate ice cream instead of making your own. Simply let it melt a little, tip it into a bowl and stir in the mince pie pieces before returning to the freezer to harden up. 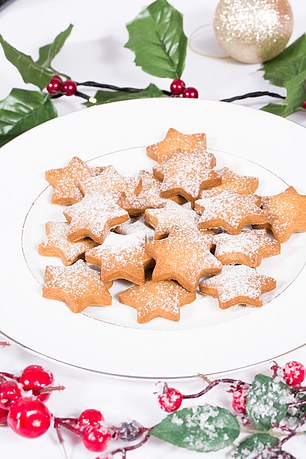 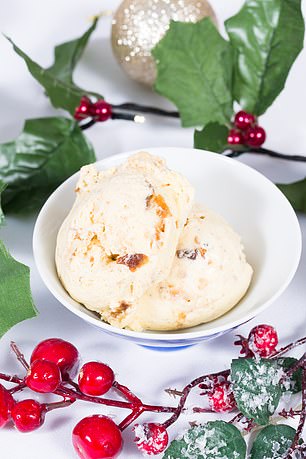 METHOD: This works best if both the brandy butter and butter are cold before you bake, so chill them in the fridge before you start.

Chop the butter into chunks and add it to a bowl with the brandy butter.

Sieve the flour over the top and use your hands to rub the butters into the flour. You can cheat by putting the whole lot in a food processor and whizzing until it comes together into a ball.

Cover the dough in cling film and put it in the fridge for an hour. Once it’s chilled, roll it out to a thickness of around 1cm and cut out your desired shapes.

Put these on a floured baking sheet — there should be enough to make around 30 small stars or circles — and bake for 20 minutes at 190c.

FESTIVE TIP: Sieve some icing sugar (or plain caster sugar) over the top before serving to make these look as if they have been frosted with snow.