The prospect of the actress Miriam Margolyes joining you for Christmas dinner is rather an alarming one.

Anyone who recalls her shocking table manners in that OAP documentary The Real Marigold Hotel, all belching and finger food, will quake at the thought of serving Mim brussels sprouts.

And as a boisterous, officious nun in Call The Midwife (BBC1), she taxed the patience of the holy sisters with her booming voice at mealtimes. At the clerical headquarters or Mother House, she held forth over the main course on everything from free will to marshmallows — ‘they are mostly air which does little to dispel the digestive vacuum!’ 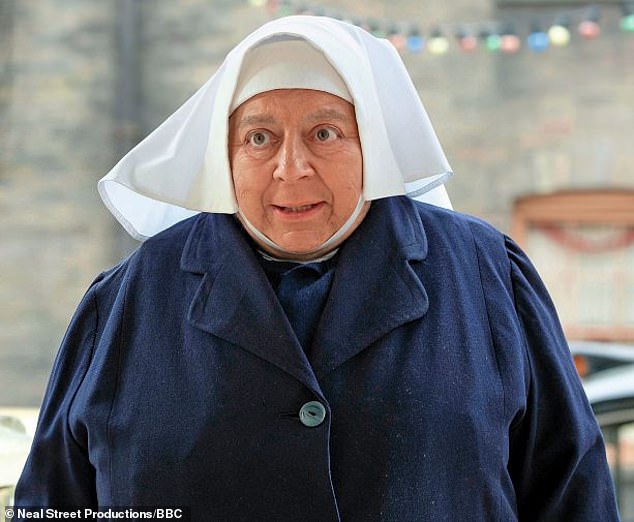 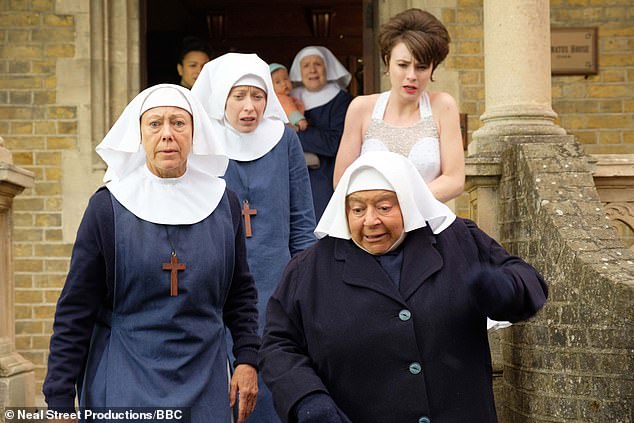 Her character, Sister Mildred, could start a slanging match in a silent convent. She certainly livened up an uneventful story and, now that she’s been elected Mother Superior, we can hope to see more of her when the series returns next month.

Call The Midwife is a revolving-door drama, with cast members constantly leaving and arriving. Jenny Agutter teased us that, as Sister Julienne, she might be fed up of all the goodness and self-denial. She sat on a stony December beach and stuck a cigarette in her mouth.

This was seriously sinful: it wasn’t even filter-tipped. But before she could light up, the bell rang from the Mother House . . . and duty called once more.

Best cartoon of the season

Best cartoon of the season: The children’s animation about a trainee dragon, Zog (BBC1), based on the rhyming story by Julia Donaldson and Axel Scheffler, was delightful — and the perfect antidote to the grimness of Watership Down.

In the end, it was Sister Winifred (Victoria Yeates) who bowed out — lured away by the big screen and a role in J.K. Rowling’s latest Fantastic Beasts movie.

Trixie (Helen George) was back from a shopping spree in Paris, with an armful of designer goodies. She proceeded to attend a birth in a Coco Chanel ‘little black dress’, because even when she’s not marinaded in sherry and advocaat, Trixie is just that sort of girl.

Her ex-boyfriend, vicar Tom, has gone to be a missionary in New Guinea. It’s almost as if he wanted to put some distance between them.

The episode marked a special triumph for Annabelle Apsion, who plays shopkeeper Violet Buckle, busy sewing the children’s costumes for the Nativity play while trying to keep an eye on bumbling husband Fred.

Over on the other channel, Annabelle had a cameo as figure skating-coach Betty Callaway, who helped steer Jayne Torvill and Christopher Dean to Olympic ice dance glory. To have a hand in Christmas Day’s two major dramas is quite an achievement.

As ever, Call The Midwife took great relish in camping up the period detail.

A new father was banished from the maternity ward so that his wife could breastfeed: ‘You’ll find a selection of reading matter in reception,’ commanded a nurse. And as all three midwives joined forces to deliver a baby in the street, beside a red phone box, Nurse Valerie told the pregnant woman cheerily: ‘Just think of us as the Beverly Sisters . . . but with rubber gloves.’ 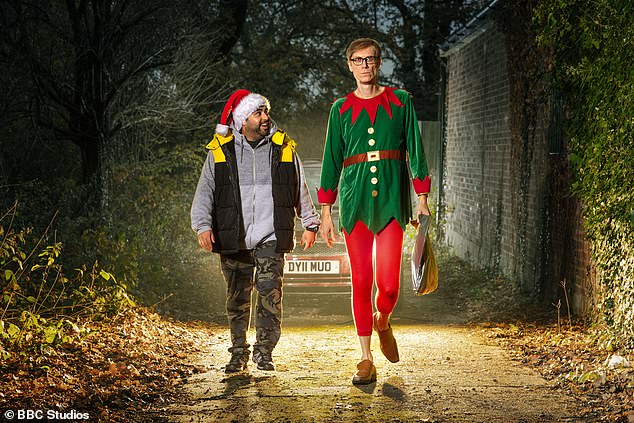 Stephen Merchant and Asim Chaudhry wallowed in our modern era’s campery, as they sent up all the tat of Christmastime in Click And Collect (BBC1)

Stephen Merchant and Asim Chaudhry wallowed in our modern era’s campery, as they sent up all the tat of Christmastime in Click And Collect (BBC1).

From the tacky plastic purple unicorn every little girl desired desperately in her stocking, to the blizzard of outdoor lights that could induce epilepsy in a snowman, all the most grating aspects of Yuletide were here.

Throughout most of the hour-long comedy, about two blokes driving across the country to buy the last purple unicorn in stock, Stephen was dressed as an elf. Asim had an illuminated jumper depicting Father Christmas in sunglasses with the slogan ‘Banta Claus’.

Despite its cynicism, this wasn’t a resentful romp. It even made this old grinch laugh.