A survivor of the Marjory Stoneman Douglas High School massacre announced on his account that he was receiving trolling emails celebrating the murders of his classmates and teachers, and he would be taking a holiday break from the Internet.

Cameron Kasky, 18, among the surviving students from the Parkland, , mass shooting sarcastically revealed two hurtful messages he received in a tweet of his own.

‘Happy holidays from me and the people sending me emails celebrating the murder of my classmates and teachers,’ Kasky tweeted with the screenshots attached. ‘Getting off the internet until after . Hope you have a great week with your loved ones.’

Nikolas Cruz is the name of the confessed Parkland shooter who committed the deadliest mass shooting at a high school in U.S. history. 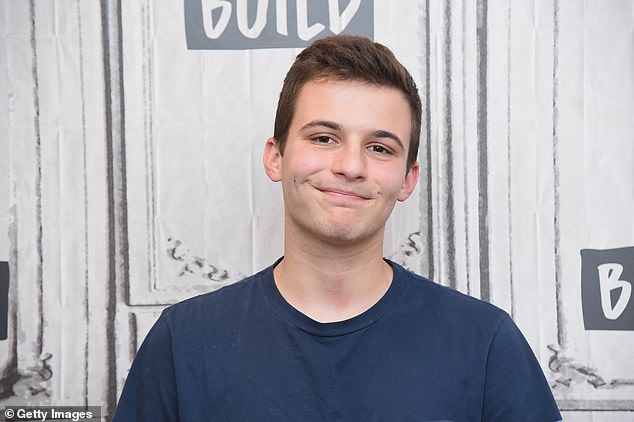 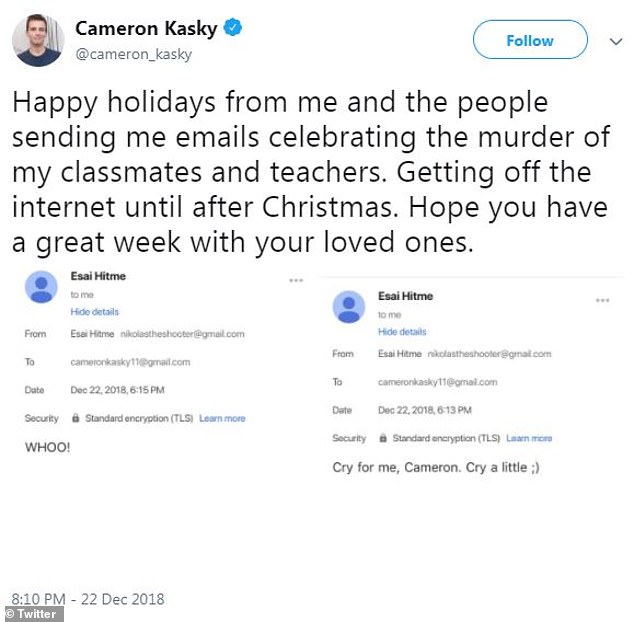 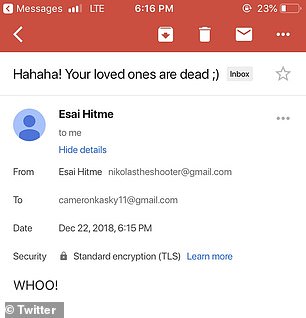 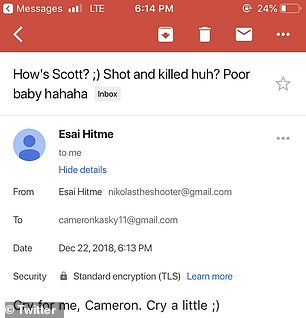 While insulting Cameron over the death of loved ones, the troll specifically points to ‘Scott,’ a likely reference to Scott Beigel, the geography teacher killed in the mass shooting

The subject line in one of of the emails reads ‘Hahaha! Your loved ones are dead ;)’ with the body text just the single word, ‘WHOO!’ 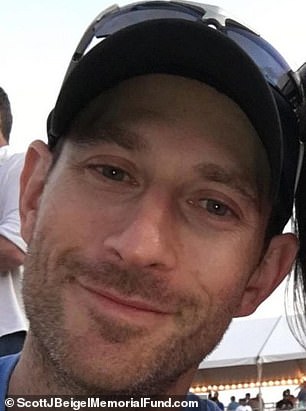 Scott Beigel was one of three school staffers to be killed in the deadliest high school shooting in U.S. history

The ‘Scott’ referenced in the email likely means Scott Beigel, one of three school faculty and staff members killed at the school along with the 14 student victims.

The memorial says of Scott Beigel that he ‘died a hero for his actions at Marjory Stoneman Douglas High School in Parkland, where he taught geography and coached cross-country.’

Beigel was shot and killed by the gunman when he unlocked a door to help students hide from the massacre.

Cameron was only a junior when he and his brother escaped the school during Nikolas Cruz’s shooting spree.

He co-founded ‘March for Our Lives’ with fellow survivor activists like  Jaclyn Corin, Emma González and David Hogg. 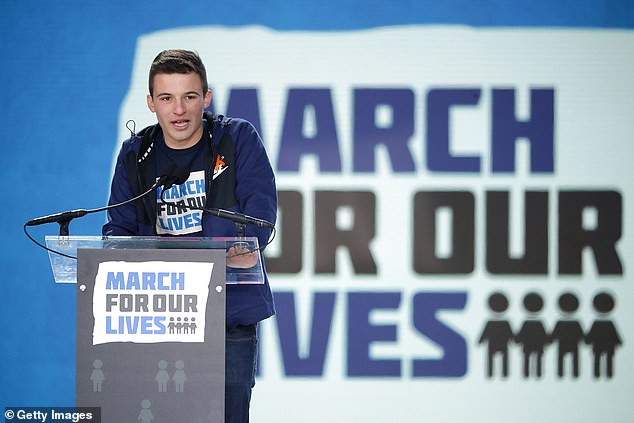 Cameron Kasky, shown, was one of the founding members of March For Our Lives, a student-led protest movement with aims at preventing gun violence 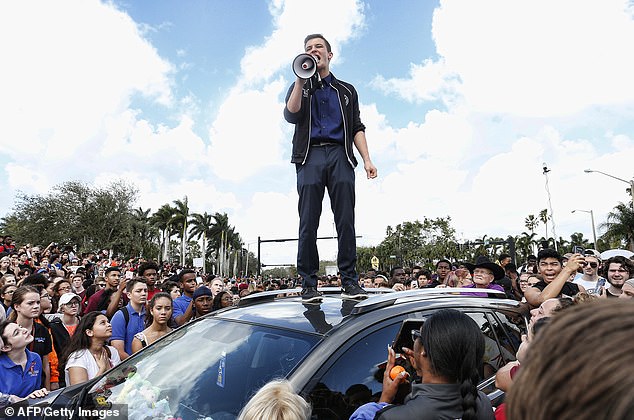 Cameron Kasky, holding the megaphone, began his activism not long after the massacre at a rally outside Marjory Stoneman Douglas High School in February 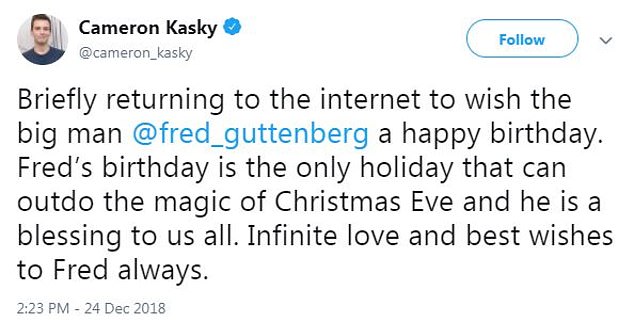 Though he left the group in September over a change in his approach to taking on the issue of gun violence prevention, the emails he claims to have received shows he is still a target of online attacks. 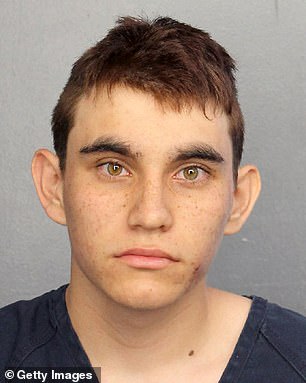 Before taking his Christmas break fully from the Internet, however, Kasky took the time to pay a birthday tribute to another fellow Parkland activist, Fred Guttenberg.

‘Briefly returning to the internet to wish the big man @fred_guttenberg a happy birthday,’ Cameron tweeted. ‘Fred’s birthday is the only holiday that can outdo the magic of Christmas Eve and he is a blessing to us all. Infinite love and best wishes to Fred always.’

Fred Guttenberg is the father of Parkland shooting victim Jaime Guttenberg who is also known as the man whose attempt to shake hands was rebuffed by Supreme Court Justice Brett Kavanaugh during his confirmation hearing.

‘Cameron, you made me smile,’ Guttenberg replied to the young man. ‘Thank you.’ 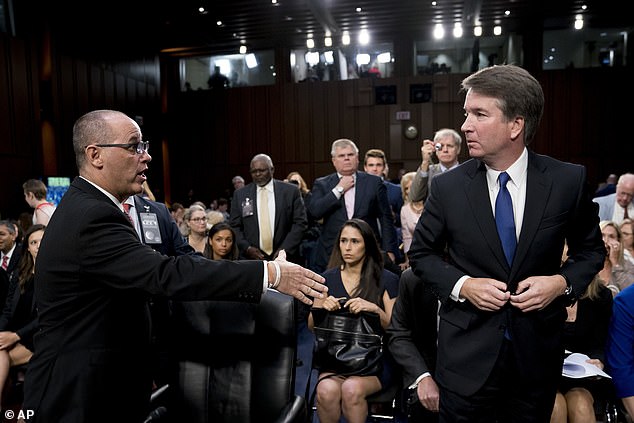 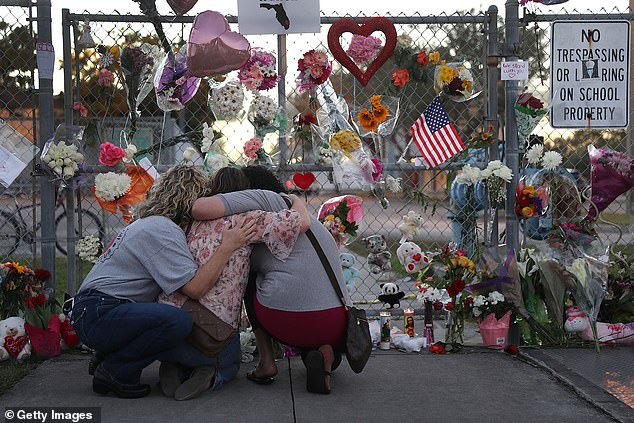 A makeshift memorial set up in front of Marjory Stoneman Douglas High School on February 18, 2018 in Parkland, Florida