Disgusted families have complained was ruined after discovering their supermarket turkeys were ‘rotten’.

Shoppers took to social media on Monday and Tuesday to complain that birds delivered by , Morrisons and Aldi were ‘mouldy.’

Some even posted pictures of their ruined meals – appearing to show ‘green’ meat which was ‘rancid’ and ‘stinking’. 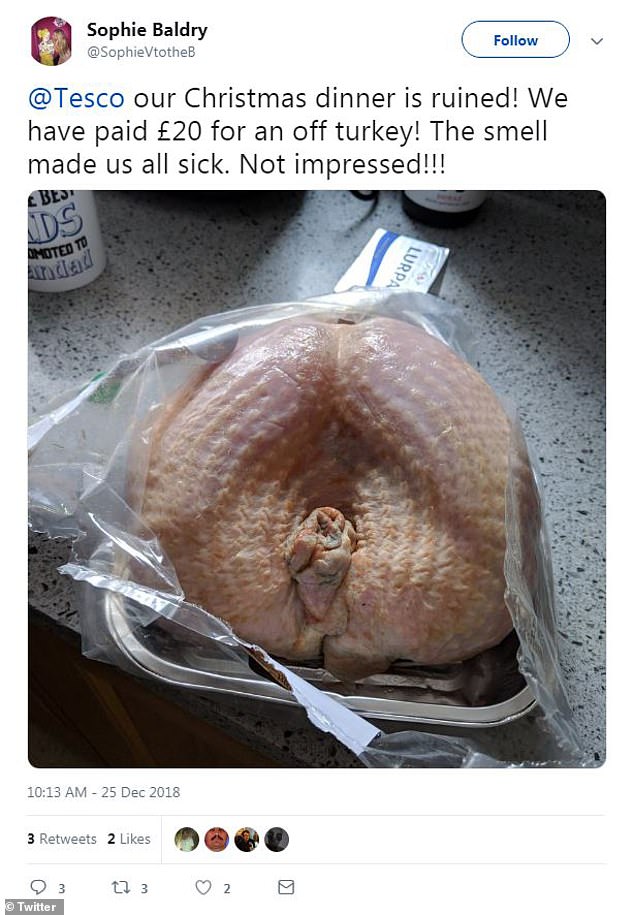 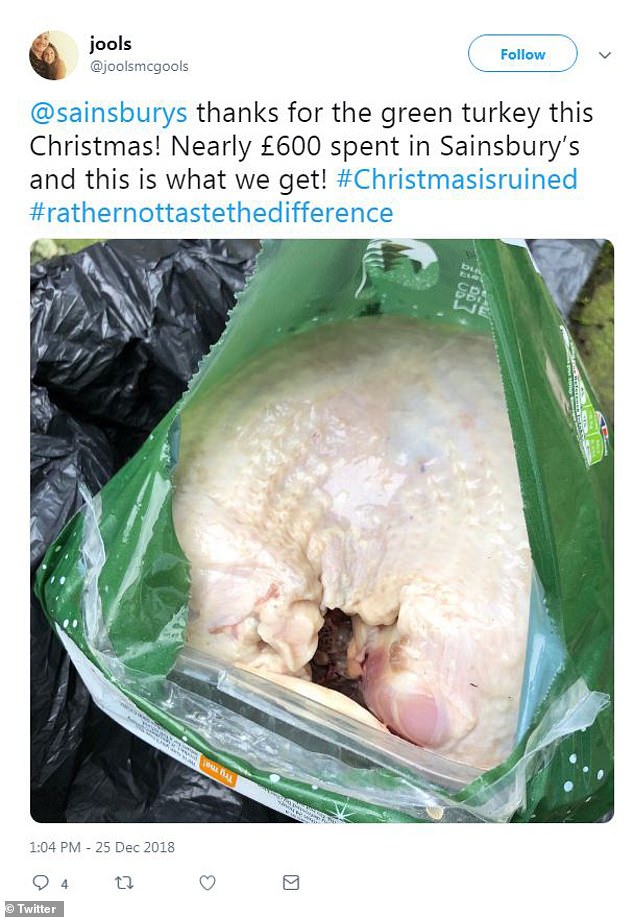 Customers from Aldi, Tesco, Sainsbury’s and Morrisons said they found ‘green’ meat when they opened the packaging

Mandy Evans said: ‘Well fabulous one stinking off turkey! Thanks very much and Happy Christmas it’s the last time I buy any meat from you you can have the stinking thing back tomorrow #turkey #aldi’

Leigh Tredget claimed she found her turkey was ‘rancid’ after opening the packaging on Tuesday morning – despite the ‘best before’ date stating December 26.

She said: ‘@AldiUK opened my Christmas turkey to cook this morning and the thing is rancid.

‘Best before date is 26 December and it had been in the fridge since buying it Friday. 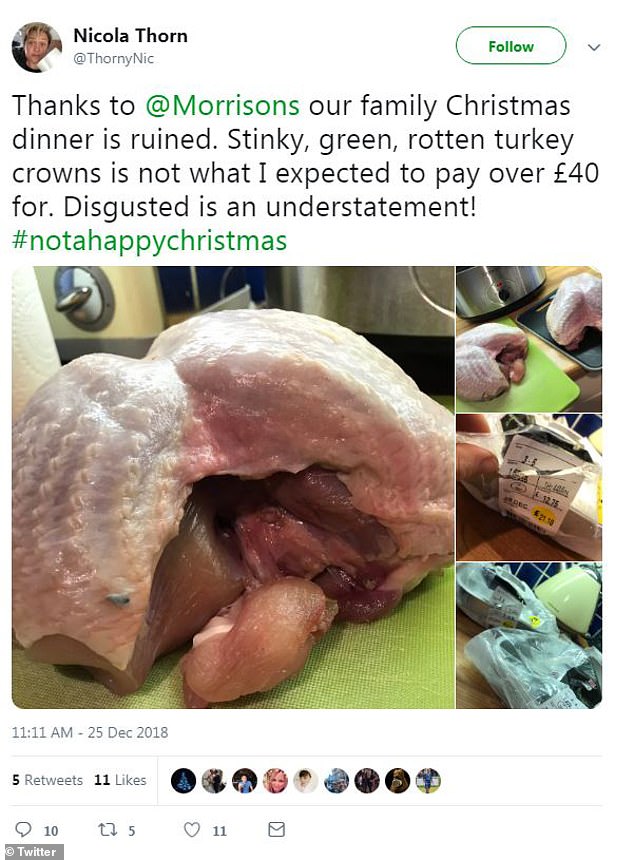 Nicola Thorn said she paid over £40 for a turkey from Morrisons only to find it ‘stinky, green and rotton’ 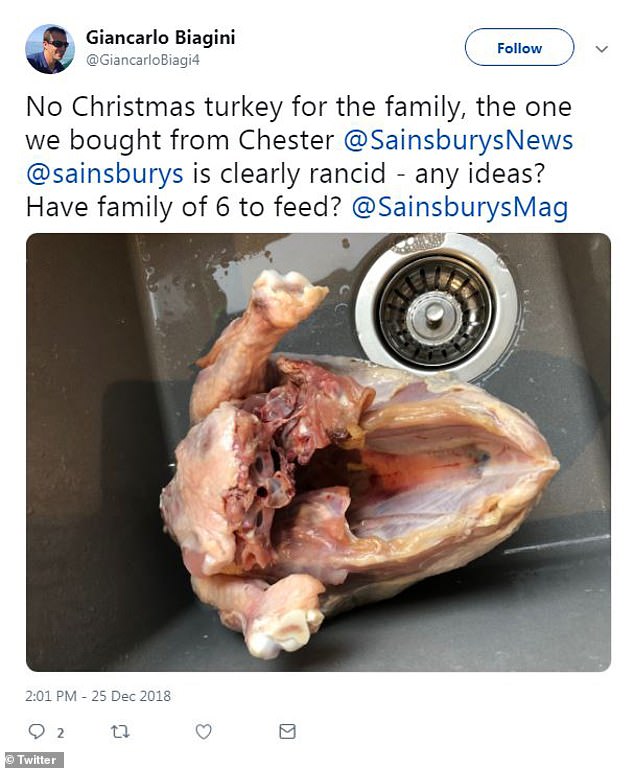 ‘Really disappointed, as our guests will be when they turn up to a turkey-less turkey dinner!’

She wrote: ‘Massive thanks to Aldi for selling us a gone off turkey. Christmas dinner is RUINED.’

An Aldi spokesperson told : ‘We are sorry that, in a small number of instances, we did not meet our usual high-quality standards. 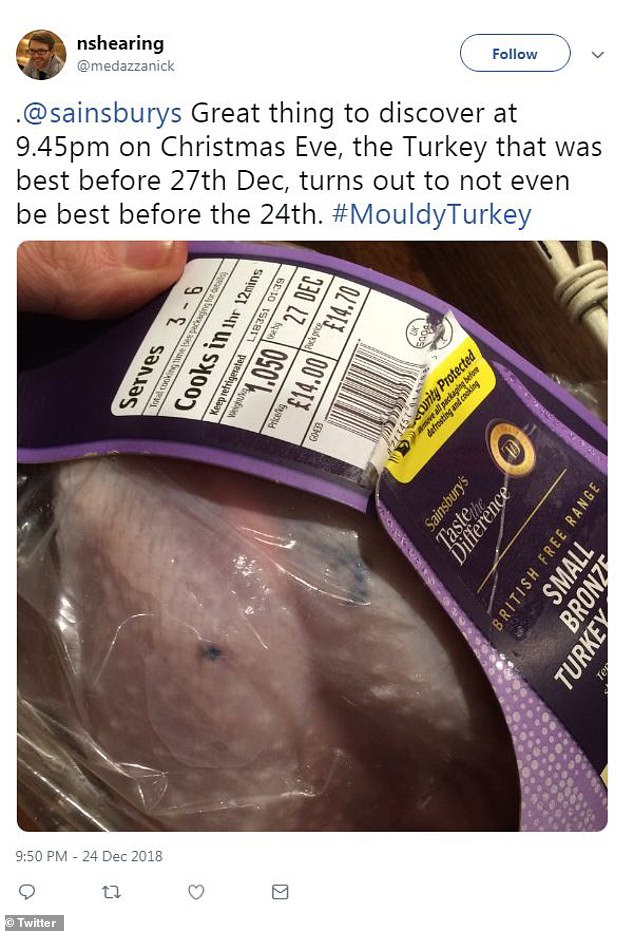 Another turkey, from Sainsbury’s, was apparently ‘mouldy’ on Christmas Eve – three days before its ‘use by’ date

‘Customers can return any product that they are not satisfied with to their nearest store for a full refund.’

Natz Smith said she had a similar experience with a turkey purchased from Tesco on Christmas Eve.

She said: ‘Thanks Tesco. Best Christmas ever with a mouldy turkey!!! Absolutely disgusted.’ 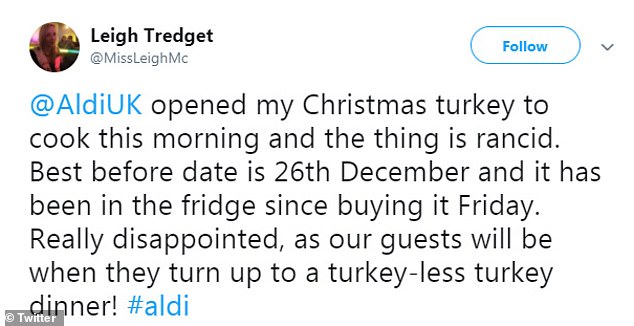 The supermarket responded to her complaint and suggested she return to the store she bought it from with the receipt.

Tesco said: ‘I’m really sorry you’re unhappy with the Turkey you bought from us.

‘Please return with your receipt to the store you bought it from and the Store Manager will be happy to help.

‘Thanks again for letting us know about this.’ 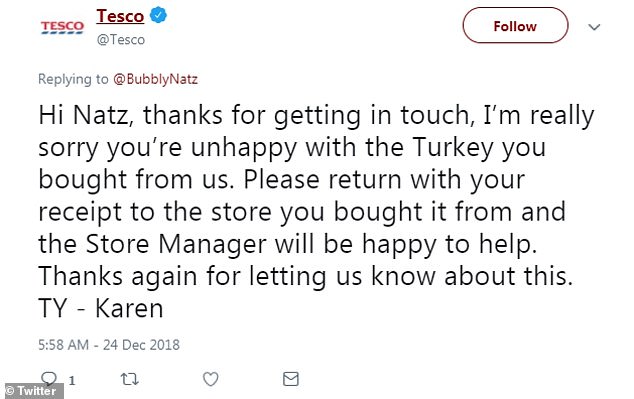