tweeted a slap at Senate Democrats on Monday, complaining that many of them voted to fund a U.S.-Mexico border fence 12 years ago – and claiming they’re only opposing it now because he is president.

‘Virtually every Democrat we are dealing with today strongly supported a Border Wall or Fence. It was only when I made it an important part of my campaign … that they turned against it,’ the president wrote.

The Senate passed a nine months ago that provided $1.57 billion for border security, including a limited amount of ‘pedestrian fencing’ and ‘secondary fencing.’

The was 65 to 32. Of the nine senators in the Democratic leadership, seven voted in favor of it. Only Elizabeth Warren and , among the most liberal lawmakers in Congress, refused to support the bill. 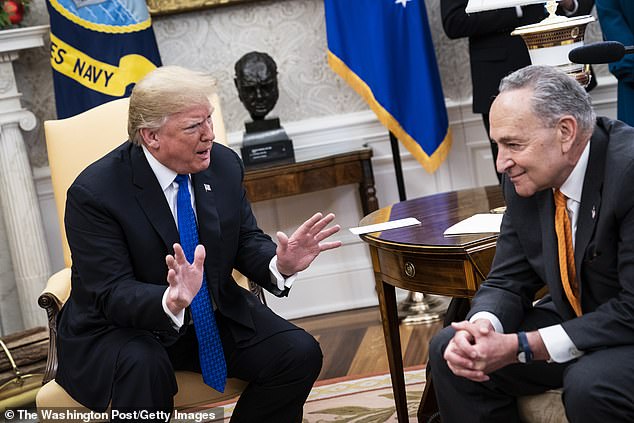 President Donald Trump (left) tried Monday to put pressure on Democrats who refuse to fund his long-promised border wall, needling them for supporting the idea in the past 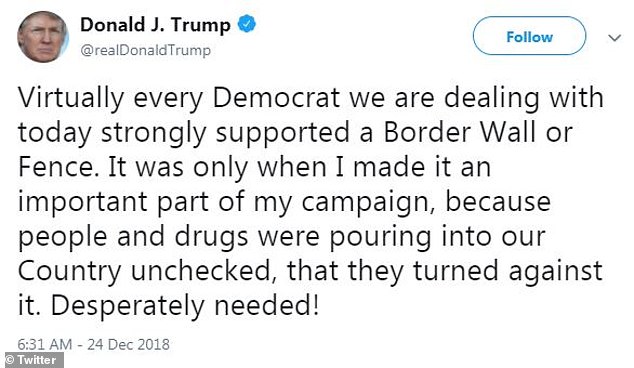 Trump claimed in a tweet that the only reason Democrats have changed their tune on a U.S.-Mexico border barrier is that he is now president 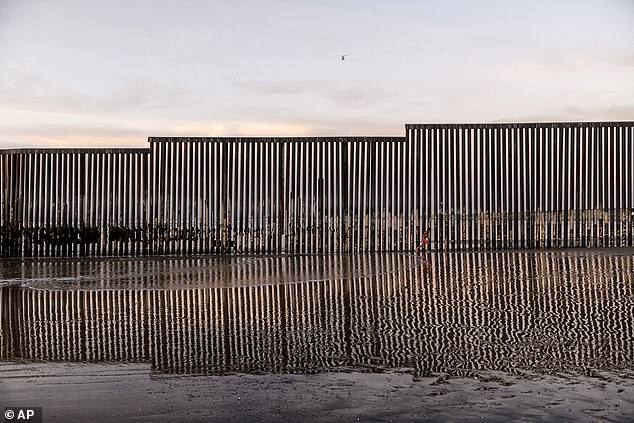 Trump wants to erect steel-bar walls like this one along much of the 1,900-mile border between the U.S. and Mexico

Trump was also referring to a far more ambitious 2006 Senate bill that by an 80 to 19 margin. The Secure Fence Act provided the George W. Bush administration with $1.4 billion for 652 miles of double-layer border fencing.

Trump has mocked many in their party for what he sees as a political flip-flop, now that the House has passed $5 billion in new wall funding only to see it stalled by Senate Democrats.

The resulting stalemate resulted in a partial government shutdown over the weekend when senators couldn’t agree on a funding package to keep a quarter of the federal budget flowing. 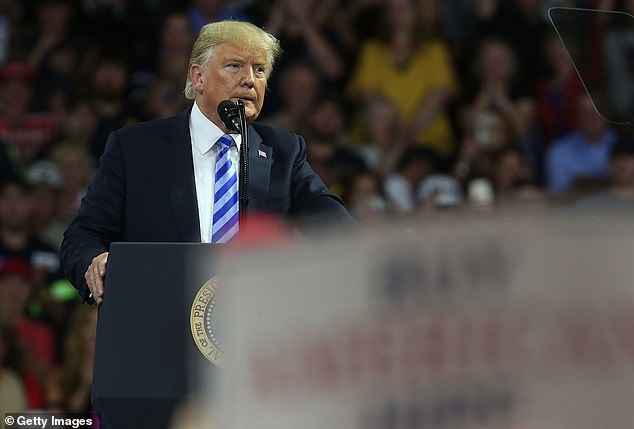 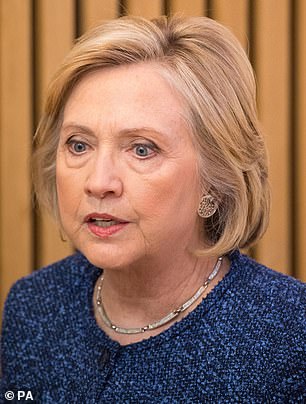 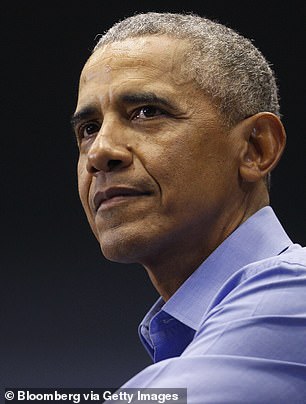 Hillary Clinton and Barack Obama, both Democratic senators in 2006, voted in favor of $1.4 billion in funding for then-president George W. Bush to fence off 652 miles of the U.S.-Mexico border; Schumer, now locked in a battle with Trump, voted in favor of the same bill

Obama, while a junior senator in his only term, said during a 2006 floor speech that the bill provided ‘better fences and better security along our borders,’ and predicted it would ‘help stem some of the tide of illegal immigration in this country.’

Congressional analysts at the time estimated that the border barrier would cost $50 billion over 25 years, including massive amounts of money to maintain and repair it.

Most of the existing fencing along the U.S.-Mexico border was erected with the 2006 funding. By 2015 the Government Accountability Office reported that the money had produced about 650 miles of it.

The total cost at that point, including personnel, was approximately $2.3 billion, the government watchdog said.

Police arrest suspect in fatal stabbing of newly engaged DC jogger
New UN ambassador 'will not be me' says Ivanka after outgoing diplomat Nikki Haley praised her
Minnesota cops who shot and killed boy, 16, who 'sprinted toward them with BB gun' won't be charged
Star Trek's William Morgan Sheppard dies aged 86
Cat lost in deadly California Camp Fire last year is reunited with his family now living in Missouri
Devon Still reveals he is expecting a child with wife Asha
Migrants and Greek Police clash in migrant camp near Diavata for third straight day
China sends medics to North Korea amid claims in Japanese media Kim Jong Un is in a vegetative state