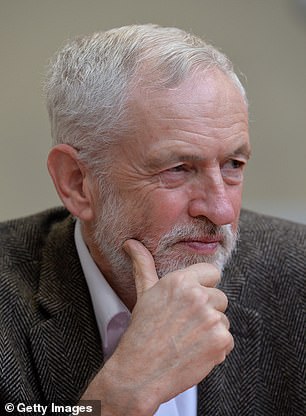 Last Monday I received a call from a member of the Shadow Cabinet.

‘What’s going on?’ they asked. It wasn’t a social enquiry, or implied criticism. They were genuinely trying – and failing – to discover what Labour’s position was on calling a no confidence motion in ‘s Government.

For the past few months, has done a masterful job on , successfully maintaining a position of cynical equidistance on the most important issue facing Britain since the war.

Even more impressively, he has framed that positioning as the product of a carefully co-ordinated strategy.

Until last week. At which point – with the end of the parliamentary term in sight, and the Prime Minister desperately struggling to save her premiership – the fiction that Labour’s leader actually knows what he’s doing fell apart.

‘He genuinely doesn’t have an idea about what to do,’ the Shadow Cabinet member explained.

‘The problem is his team keep lurching from the sort of naked electioneering that would make Tony Blair blush to the dogmatic Marxism of their childhood.’

Symptoms of the depths Labour have plumbed in the past seven days included one of Mr Corbyn’s MPs comparing herself to Jesus Christ, shortly after being convicted of perverting the course of justice.

It was one of the least noteworthy events. There was the ‘stupid woman’ slur and compounding lie, the spectacle of one of his MPs resigning the whip, citing his own party’s anti-Semitism and, a day later, one of his key allies signing a petition in support of a notorious Holocaust denier. 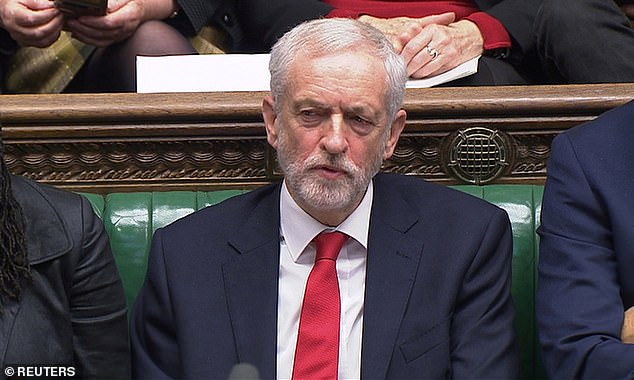 But it was Monday’s shambolic quadruple U-turn on the confidence challenge that made Labour MPs realise that the tactical opportunism they had been slavishly supporting had run its course.

‘On Brexit he’s just a snake-oil salesman, like Farage,’ one told me. ‘It’s time for people to pick a side.’

Until now, most of Corbyn’s colleagues have been content to do anything but. Their speeches have contained emotive demands for the Prime Minister to put the ‘national interest first’, after which they have lined up robotically behind their leader to oppose every measure proposed by the Government to break the Brexit impasse.

They have accused Mrs May of ‘running down the clock’ when their own strategy has been to keep the clock ticking indefinitely to avoid taking any clear position on Brexit. But now Corbyn’s incompetence has contrived to wrest the focus away from the Tories’ Brexit divisions.

‘For the first time in months, the political pressure has been cranked up on Labour,’ a May aide told me with relief.

‘The narrative has just been about us pummelling ourselves. But the cracks in Corbyn’s operation are starting to surface.’

A week after 117 of May’s MPs ambushed her and demanded a change of leader, this was supposed to be the perfect moment for The Absolute Boy to strike.

Instead, he has merely underlined his own ideological toxicity: his commitment to Irish nationalism, making him anathema to the DUP; his aggressive hard-Left tribalism, preventing the construction of a workable coalition with moderate Tories.

Corbyn pledged to his supporters he would defeat the Conservatives in a confidence motion and force an election. But in the end he couldn’t even risk tabling such a motion – never mind win one. 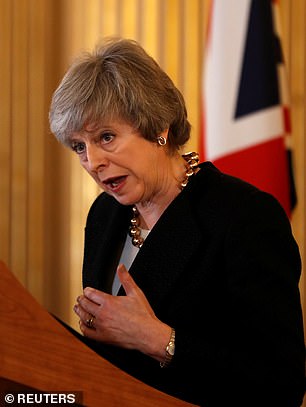 A week after 117 of Theresa May’s MPs ambushed her and demanded a change of leader, this was supposed to be the perfect moment for The Absolute Boy to strike

Within Labour there are those who have been aware his no-confidence braggadocio would prove his undoing.

According to senior Shadow Ministers, Labour Chief Whip Nick Brown has been urging his leader to try to broker a Brexit compromise with the Government.

‘Nick knew it would only be a matter of time before our own splits started to pull us apart,’ one said.

But with Corbyn now immobilised by Brexit paralysis, Labour MPs are preparing to pursue their own strategies.

For Labour Remainers, this means an overt drive towards the promised land of a second referendum, reaching out to Tory Ministers who have started to brief that a No Deal Brexit represents a personal red line.

‘The thing we’re saying to them is, ‘If you want to stop the countdown to No Deal, then the only way to do that is to suspend Article 50,’ ‘ said one Labour MP. ‘And the EU have made clear the only way they’ll agree to that is if it’s coupled to a second referendum.’

Other Labour Remainers think Corbyn is so intent on delivering a ‘Red Brexit’ he will actively try to sabotage their plans by committing Labour to a ‘free vote’ on the issue.

This fork-tongued proposition would have the practical effect of killing off any new referendum by giving Labour Brexiteers licence to oppose it.

Are some Brexiteers resorting to dirty tricks to undermine Theresa May’s deal? According to one Tory Minister, they could well be.

‘I was in the tea-room last week with one of our backbenchers who was telling people he was on the fence about whether to back her. The next day, his office started to get dozens of emails urging him to vote against. He doesn’t believe it was a coincidence.’

Some Government insiders think there is an organised campaign under way to target waverers, especially those in the 2015 and 2017 intakes.

‘The problem with the new guys is they’re not used to the pressure,’ a colleague explains. ‘Their office suddenly gets a few negative letters and they start freaking out.’

A question puzzling May allies is where opponents could obtain the membership data necessary to target Tory MPs. I’m told to expect some interesting revelations about this in the New Year.

They also described as ‘a kick in the guts’ yesterday’s Guardian interview, in which Corbyn pledged to pursue Brexit even if Labour won an election.

To many moderate Labour MPs, killing off the option of a second referendum would be an act of war, which is why some of them have started to think the unthinkable.

‘I can’t allow No Deal,’ one Shadow Minister admitted to me, ‘and the fact is May’s strategy of running down the clock is working.

I’ll have to wait to see precisely what her final offer is.’ In effect, they are preparing to present Corbyn with an ultimatum.

If he removes the option of a second referendum, they will have no option but to vote for May’s deal.

Meanwhile, Government insiders are suddenly daring to believe. Partly as a result of Corbyn’s blundering, last week saw a subtle repositioning from the hardcore Tory Brexiteers.

Where once they were looking for reasons to vote against May’s deal, many have begun to look for excuses to back it.

Downing Street has also detected a change in tone from the DUP. ‘The key is whether we can get to the point where Labour votes could make the difference,’ said a May aide. ‘The way we look at it, for every Tory vote we get back, we bring another Labour vote into play.’

Incredibly, the Prime Minister is ending 2018 with political momentum. Even more fantastically, she has been handed it by the man who had pledged for the second year in a row to force her out of No 10 by Christmas.

This was supposed to be the Labour leader’s time to strike. Instead, Jeremy Corbyn might just have saved Theresa May’s premiership.

On Friday evening I was chatting to a Department for Transport official about the Gatwick drone crisis.

‘It’s been really hard to tackle,’ he was explaining. ‘They’ve gone now, and the airport is operating again. But we don’t know where… Uh, oh.’

The drone was back. Oh, for the days of leaves on the line…

Marcus Rashford remains a work in progress...despite his goal against Spain
Brexit deal battle comes between married Tory MPs as Jack Lopresti and Andrea Jenkyns
Welsh chickens push sheep down the pecking order with more of the poultry than lambs (or people)
Wild raccoon moves into German zoo; keepers can't expel it
Couple's dream £12,000 Lanzarote wedding in ten days in jeopardy as Thomas Cook faces going bust
Raheem Sterling AXED by Gareth Southgate after trying to grab Joe Gomez by the neck
Rics calls for a stamp duty holiday after coronavirus
Writer Olivia Fane has a stark warning for anyone tempted by an open marriage