Almost nobody in broadcasting quits while they’re ahead. You can count on one hand the number of superstar presenters who’ve left the biggest jobs when they’re at the peak of their form; and many more have to be forcibly dislodged from programmes to which they’ve clamped themselves like limpets.

When I was a executive, there were few things more dispiriting than a conversation with someone of pensionable age who thinks they have another decade left in them.

So the voluntary departure of Chris Evans at the age of 52 from the most popular radio show in Britain — his last show is Eve — to the relative backwaters of Virgin Radio is highly unusual. 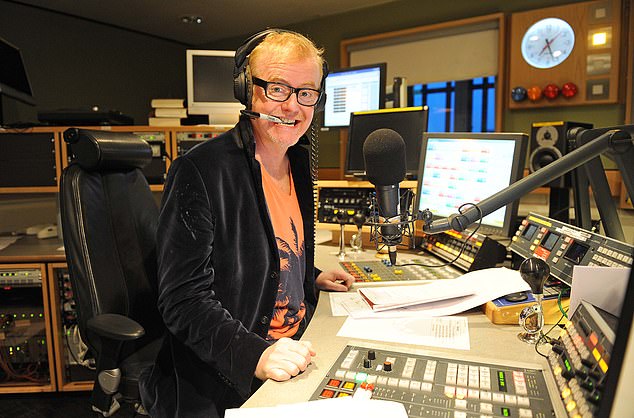 Chris Evans, 52, will host his last BBC show on Christmas Eve and move to Virgin Radio. The BBC put Evans onto the Radio 2 breakfast show eight years ago

It is also a huge disappointment to the audience when someone leaves a role they do brilliantly well. Evans is one of the all-time greats of radio presentation, and still firing on all cylinders.

His worth seems more apparent than ever in the times we’re living through. While the news programmes chunter on about the ups and downs of Westminster politics or the latest warnings from Brussels about Brexit, and the world seems gloomier by the day, Evans’s show is sunny and high-spirited.

Some may still resist his charms, but for an overwhelming majority he has created a morning family — reinforced by the way he involves his own children as a modern, slightly imperfect dad.

This week, once again, his nine-year-old son Noah has been asking some of the questions and assisting with corny jokes that show every sign of having been supplied by his father. But on these airwaves there are no domestic rows and the energy level is always fizzing. 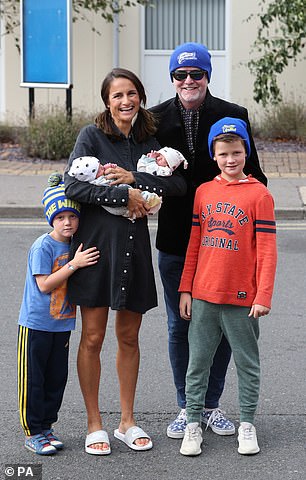 Chris Evans and his wife, Natasha, leave Frimley Park Hospital in Surrey with their newborn twins, and Eli, six, and Noah, nine

This is no mean achievement for someone starting at 6.30am for a three-hour show, five days a week; and Evans attracts an audience of all ages.

The students I talk to as Master of Selwyn College, Cambridge, will mention Evans’ name much more frequently than those of the news agenda-setters on Radio 4 or whoever is currently doing the Radio 1 breakfast show.

The sobbing you hear is therefore not just from listeners but from BBC bosses who are losing one of their main assets to a direct rival.

The Evans ratings have had a slight wobble recently and dipped below 9 million a week, but they still beat all other radio programmes and are two million ahead of Radio 4’s flagship Today.

They also dwarf almost all television audiences in this multi-channel world.

This success shouldn’t obscure the gamble that the BBC took in putting Evans onto the Radio 2 breakfast show eight years ago.

He was taking over from the ultimate broadcasting icon, Sir Terry Wogan; and there was the starkest of contrasts between a laid-back wordsmith Irishman and a hyperactive and sometimes rebellious DJ who had made his reputation in shows for young people.

The shift was from Wogan’s one-to-one conversational style into Evans’ morning ‘zoo’ with seemingly a cast of thousands; but what they both had was a warmth and an invitation to be part of their club, and that has retained the loyalty of listeners.

I had some experience of the Evans’ style when he was part of the line-up for the London 2012 Olympics, which I was running for the BBC.

We wanted to build up excitement for the Games across all the BBC’s services, and Evans did that in spades on Radio 2. His show was relocated to the Olympic Park, and I went along for the duty ‘BBC suit’ interview on the morning of the opening ceremony.

I’m taking a guess that there were a few million other people he’d rather have been talking to, but he was glowing in his welcome without being sycophantic and impishly intelligent in his questioning. It was one of those rare occasions when a boss could be part of a feelgood experience.

Like Wogan, he makes you feel part of his club

But the flip side of the Evans Olympic experience happened later in the Games. BBC management had taken a tough line in resisting a bombardment of suggestions from Downing Street that the then prime minister David Cameron would be the perfect guest for our Olympic programming.

There must have been something about the record audiences on TV and radio, and the national exuberance, that the Conservatives wanted to convert into political advantage – and we were determined to keep this kind of politics away from the sport.

We bopped on the head every offer from No. 10, and we sternly told producers that interview bids for the PM were not allowed. 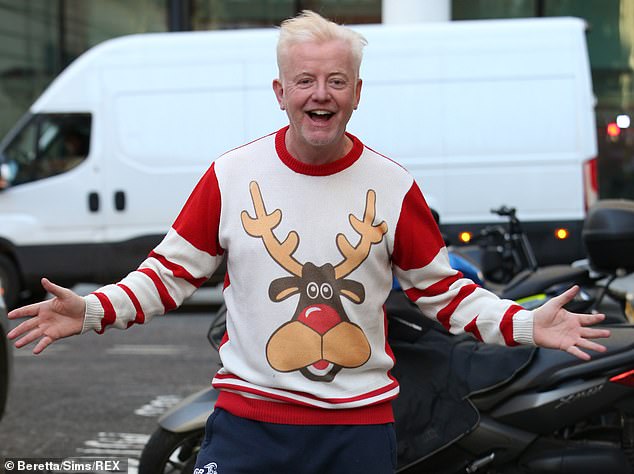 Evans is seen out and about this week in London. His audience figures dwarf almost all television audiences in this multi-channel world, ex-BBC bigwig Roger Mosey says

It therefore came as something of a surprise to wake up in my BBC-rented flat in Hackney one morning during the Games to hear David Cameron chirping away happily on the Chris Evans show — and not from Downing Street but from the Olympic Park, where he had been respectfully let in by our security team.

There were some perfectly fair questions from his host, but Cameron was living Downing Street’s dream: linking himself with the success of the Games on the nation’s most popular radio show.

From Prince Harry to pop queens, he has pulling power

On our morning editorial conference call with the director-general, the Evans show was in the dock. Decrees of condemnation were issued; instant inquests were launched. The circumstances were murky, but it seemed that this was largely Evans’ own initiative.

In normal circumstances, we would have been delighted that a presenter had the kind of contacts that could get the prime minister into a peak-time special appearance; and, six years on, I would give Evans full credit for that if not for adherence to editorial policy.

Evans’ pulling power has continued with Prince Harry as a studio guest announcing the Invictus Games for wounded, injured or sick service personnel and veterans, or helping out with the travel news in contemporary royal fashion, alongside the daily interviews with the more routine kings and queens of pop.

Insiders say that it is not always a bed of roses working on the Evans show.

His rebelliousness was at its peak in his Radio 1 days when he had a falling out with his boss, whom he nicknamed on air as ‘the fat controller’.

He is reported to have mellowed with age, but ‘a rollercoaster’ is one description of a typical working day when he moved to Radio 2.

Evans drives himself hard and has a head full of creative ideas, and it can be a tough ask for the people charged with turning those into programme items.

The bad times could be pretty bad, say some, though characteristically the rewards from Evans were high, too. A team Christmas dinner, at his expense, would shun all the BBC-favoured restaurants around Broadcasting House and be held at a luxurious Heston Blumenthal restaurant instead.

Perhaps it’s no surprise that many of Evans’ team are moving with him to Virgin.

Mind you, Evans can afford the largesse. His wealth is estimated in the Sunday Times Rich List at more than £50million, and at his peak he was earning more than £2.2m a year from the BBC. 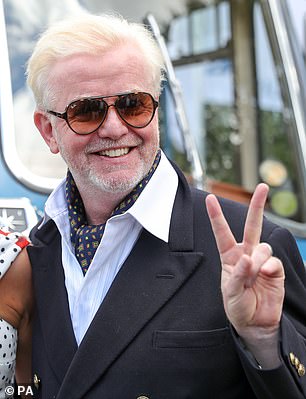 Evans confirmed he said ‘yes’ to appearing on Strictly Come Dancing next year. Ex BBC bigwig Roger Mosey says Evans is one of the all-time greats of radio presentation, and still firing on all cylinders

The Corporation flounders each year when trying to make the case for its presenter pay cheques, but there is a better case for Evans than for some. He is the show, and he makes it distinctive.

It’s not a case of reading someone else’s script or performing to another’s tune. That’s why his successor, Zoe Ball, will face a high bar for success: now, it’s up to her and her alone.

The recent drop in Evans’ salary — to a mere £1.6m a year — reflects his reduced television role, and particularly his departure from Top Gear.

He never seemed to settle there, despite his love of cars, and there are indications of a more general problem with Evans and TV.

At his youthful iconoclastic best, he hogged the camera and was compulsively watchable.

The Big Breakfast and Don’t Forget Your Toothbrush were at times rough and raw, but you couldn’t take your eyes off them because you wanted to see what Evans would do next.

These days, he seems more intent on being liked, and — since he was following in the footsteps of the famously abrasive Jeremy Clarkson — that may have been one of his weaknesses on Top Gear.

Certainly, in his appearances on the likes of The One Show on BBC1, there is a curious neediness in his on-air personality which isn’t apparent on the radio.

He ends up in a similar position to Terry Wogan: itching to be on TV, but in reality a genius at radio where he is truly at home.

Now his home address is going to be Virgin Radio. When he announced his departure from the BBC, Evans said: ‘Some of us are mountain climbers [but] if you get to the top of your favourite mountain and you stay there, you become an observer. I want to keep climbing.’

A journalist wrote cruelly at the time that he was swapping an alpine peak for a molehill, but there are greater factors at play.

Virgin is ultimately owned by News UK, part of Rupert Murdoch’s empire; and the announcement this week of sponsorship of the programme by Sky, which will ensure airtime free of conventional advertisements, shows how commercial media companies are now seeking to emulate the BBC’s strengths and cross-promotion on multiple platforms.

But Virgin are unlikely to follow the BBC’s example in publishing Evans’ pay and then nagging him for a cut in his salary.

However, what they will also not have is Radio 2’s position at the heart of the national conversation.

Virgin has fewer than half a million listeners a week, and — though Evans will unquestionably lift that, potentially by several multiples — he will sometimes find himself talking to the equivalent of a thinly populated room.

How this will play with someone who so revels in attention is difficult to predict — although it might explain his decision, revealed this week, that he’s said yes to being a contestant on Strictly Come Dancing next year.

The reality is that the broadcasting landscape is changing, as shown by former BBC Radio 4 presenter Eddie Mair’s move to LBC and former Radio 1 DJ Chris Moyles’ tenancy on Radio X — optimistically described on the station website as ‘the biggest show in radio’.

The days are over in which the BBC was the only place for the stars. But the risks to the presenters who stray are significant, too: Evans will never have the platform that he’s had for the past eight years.

What we’ll have as listeners, though, is a warm glow from a talent who never flagged in giving it his best shot; and, in bidding him goodbye, there will be unusually few who will say: ‘Well, it was time he went.’