Customers have accused of sexism after it created a segregated aisle for girls’ toys.

A shopper called out the supermarket giant for ‘gender bias’ after spotting the ‘Girls Toys’ sign in the Tesco Extra store in St Leonards on Sea, East Sussex.

And social media users have now slammed the store for both sexism and poor grammar, noting workers failed to use an apostrophe in the sign. 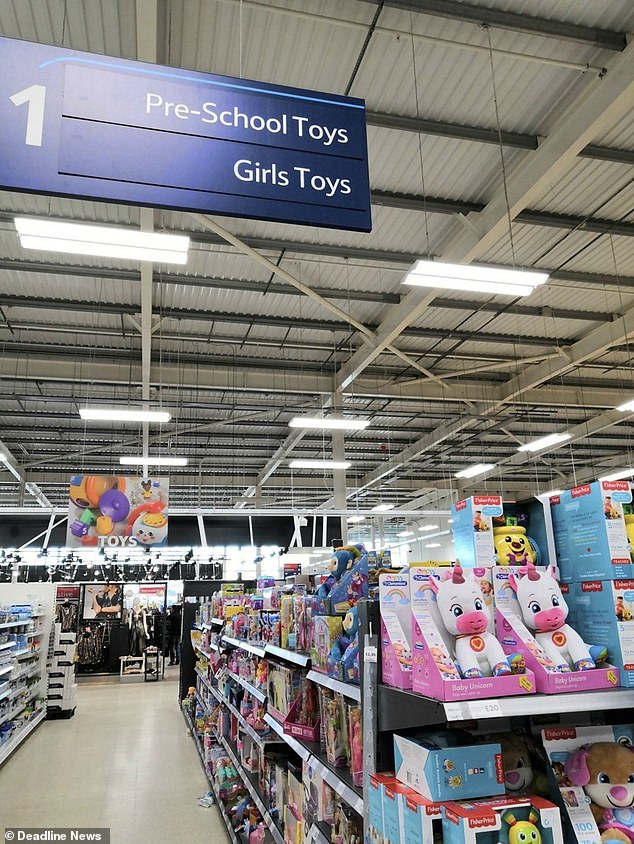 Rob Lowe took a picture and posted the image online with a complaint about ‘gender bias’.

But many pointed out that there should be an apostrophe after the ‘s’ in the plural possessive, ‘Girls’ Toys’.

Mr Lowe took the picture on December 9 and posted it with the caption: ‘Come on Tesco. This isn’t really acceptable anymore.

‘My daughter loves unicorns and dolls. She also loves robots, dinosaurs, rockets, monsters and Lego. Don’t make me have to reassure her that this is ok.’

Television writer Donna Franceschild claimed the lack of an apostrophe was further evidence of sexism.

She tweeted: ‘Plus, how is she supposed to get to grips with English grammar if Tesco omits the crucial apostrophe indicating the possessive?

‘Perhaps they don’t think girls should be worrying their pretty little heads about that.’

Rob said he was ‘frustrated’ with the apostrophe ‘because it distracts from the real issue of gender bias in society’.

He added: ‘Boys and girls are encouraged to perform certain roles and seemingly small things like signs, toys, colours and clothes make a real difference to their life choices.’

The sign was spotted in the Tesco Extra store in St Leonards on Sea, East Sussex

Hundreds of people on Twitter waded into the debate.

@lonearrangeruk responded: ‘More concerned about the lack of apostrophes then any other feigned outrage. Seriously. Do you think they have patrols on the aisles?

@mike36l posted: ‘Well said Rob if they just left the sign saying toys it would have been acceptable for all.’

@Brown1977Ben said: ‘I agree couldn’t they have put toys instead of making it a boy or girl thing.’

@KateLlewellyn1 wrote: ‘As a girl whose favourite toys have always been game boys, playstations etc. This needs to stop. Girls’ toys aren’t as fun anyway.’