When Michael Sheen split up with American comic Sarah Silverman he blamed , saying he felt the need to return to our shores to explore why we voted to leave the EU.

So let’s hope the Welsh actor’s new girlfriend sees the funny side of our departure from the EU.

For she is another comic — and this time one from Ireland, Aisling Bea.

‘No doubt they will enjoy endless discussions about the Irish backstop,’ jokes a showbusiness pal.

The pair are understood to have been quietly courting for several months and this week Aisling, 34, circled, confirmed the romance by sharing a photograph online of them at a charity event for refugees in New York. 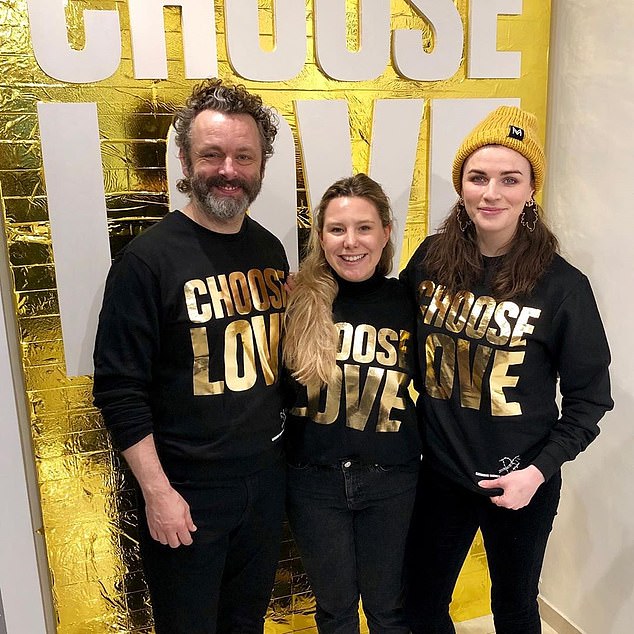 The pair are understood to have been quietly courting for several months and this week Aisling, 34, (right), confirmed the romance by sharing a photograph online of them at a charity event for refugees in New York

Together with a mutual friend, they wore shirts emblazoned with the slogan: ‘Choose love.’

Sheen, 49, who is best known for playing Tony Blair in three separate films, has a 19-year-old daughter with Kate Beckinsale and his exes include another Hollywood star, Rachel McAdams.

His new girlfriend, whose mother is a former jockey and late father was a vet, splits her time between Los Angeles and London.

Newport-born Sheen revealed last month that his four-year relationship with Silverman had hit the rocks because he wanted to come back to Britain.

He and Sarah felt in ‘different ways’ that they wanted to ‘get more involved’ in the political climate after Brexit and Donald Trump’s election. 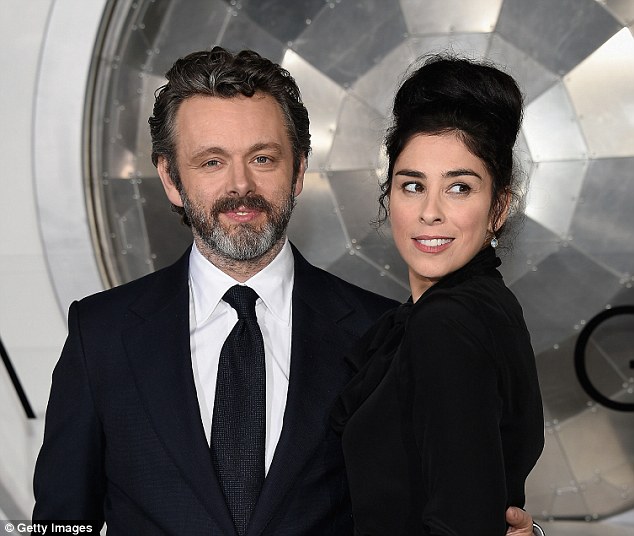 ‘It led to me wanting to address the issues that I thought led some people to vote the way they did about Brexit, in the area I come from and others like it,’ he said.

‘I felt a responsibility to do something, but it did mean coming back here — which was difficult for us, because we were very important to each other.

‘But we both acknowledge that each of us had to do what we needed to do.’

Although the political climate is challenging, the omens are good for Sheen and Aisling, who read French and Philosophy at Trinity College Dublin.

She said: ‘Brexit is not ideal, but relations between Ireland and the UK have been getting stronger.’

Criticised by her father, Thomas Markle, and with her ex-husband, Trevor Engelson, making a TV comedy about an American divorcee who moves to London and marries a prince, the Duchess of Sussex could be forgiven for worrying about men’s motivations.

And now Hunter Johnson, who runs the Man Cave — an organisation that promotes ‘positive masculinity’ — has revealed that Meghan shared her concerns with him.

‘Meghan came up to me and said: “Hunter, Oh, my God. I wish the Man Cave was around when I was young. I know so many men who really needed this,” ’ Johnson says. 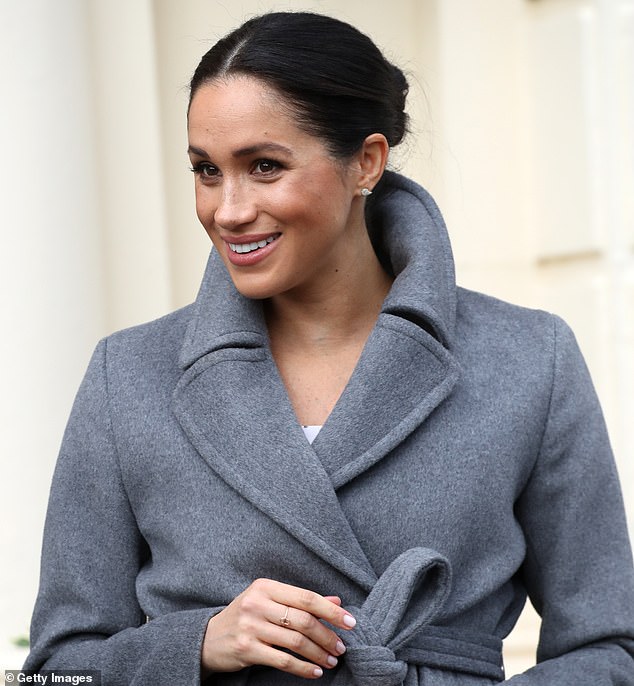 And now Hunter Johnson, who runs the Man Cave — an organisation that promotes ‘positive masculinity’ — has revealed that Meghan shared her concerns with him

The Duchess is understood to have made the comments during a reception at Buckingham Palace earlier this year.

She and Prince Harry met Johnson, whose group encourages ‘emotional intelligence’ among young men, for a second time when they visited his native Melbourne during their recent tour Down Under.

He provides the voice of rabbit Hazel in BBC1’s new animated adaptation of Watership Down this weekend, but Hollywood actor James McAvoy admits that furry creatures make him sick as a dog.

‘I’m actually allergic to most animals you can keep as a pet,’ the X-Men star discloses.

‘I’m allergic to cats, dogs, rabbits and lots more. So I can’t really work with them, let alone keep them. This is a good way of working with rabbits without sneezing.’

Orlando Bloom shot to stardom as an elf in The Lord Of The Rings and his little dog is determined to make an equally big impression.

The micro teacup poodle, called Mighty, stood up on his hind legs as he faced up to what appeared to be a Pomeranian on the mean streets of New York. 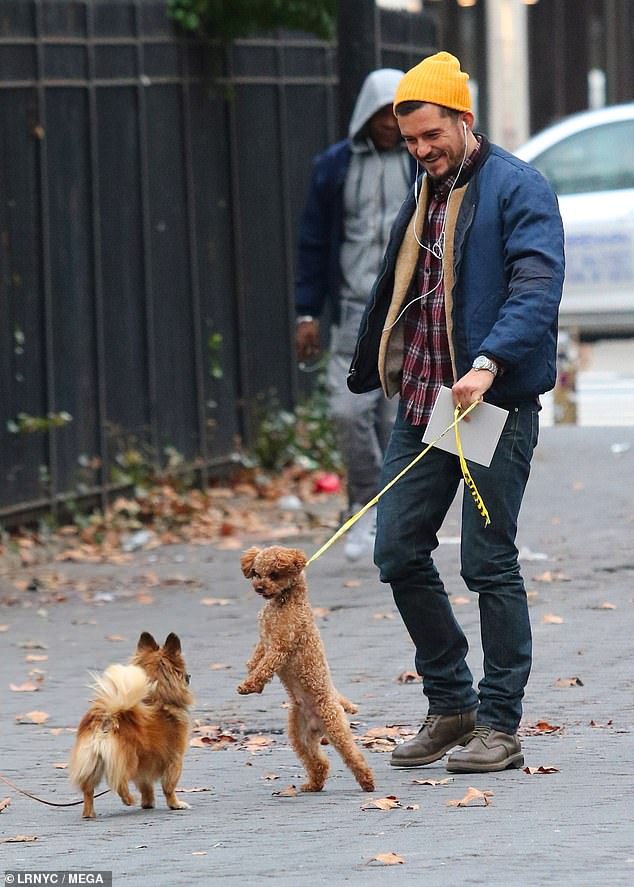 Mighty is not the only one being kept on a tight leash. Bloom, 41, who wore a yellow beanie hat as he took his pooch for walkies, has been under the watchful eye of his pop singer girlfriend, Katy Perry, since he was accused of canoodling with Selena Gomez, the former Disney Channel star who is 15 years his junior.

The Queen is due to catch the train to Norfolk tomorrow and there will be some good news when she finally arrives at Sandringham. The private estate sells Christmas trees to the public and hundreds have already been snapped up.

Spruces cost between £20 and £120, and with fewer than 100 of the 400 trees it felled remaining, Her Majesty can expect to take around £20,000 from this year’s crop. That should pay for a few Christmas crackers.

If you see a floppy-haired man with telegenic looks weeping on your flight over the Christmas holidays, it may well be Professor Brian Cox, the BBC stargazer.

‘Bizarrely, I seem to be more susceptible to crying at films on planes,’ wails the 50-year-old physicist. ‘It must be the altitude, or the food or alcohol levels.’

Prof Cox used to play keyboards for the pop group D:Ream, whose song Things Can Only Get Better became New Labour’s anthem. That’s enough to reduce anyone to tears.

Strictly Lauren has a ball on her birthday

Her sparkly shoes didn’t quite carry her to the Strictly final but Lauren Steadman — beaten in the semi-final dance-off by trained American hoofer Ashley Roberts — had reason to celebrate nevertheless.

To mark her 26th birthday yesterday her chums baked her a ‘glitter ball’ cake, with iced bunting spelling out: ‘Strictly the best Lauren.’ 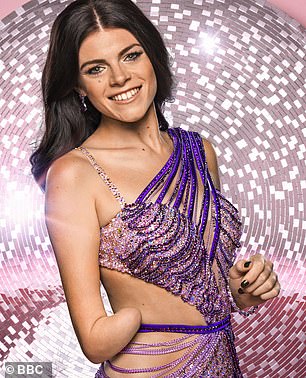 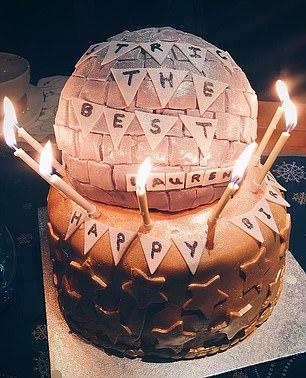 To mark her 26th birthday yesterday her chums baked her a ‘glitter ball’ cake, with iced bunting spelling out: ‘Strictly the best Lauren’

Lauren’s professional partner A. J. Pritchard was nowhere to be seen as the Paralympian triathlete, born without her lower right arm, marked the occasion with five of her closest girlfriends.

How about Bake Off next for Lauren?

The BBC is bringing back the Christmas ghost story — but it couldn’t resist politicising the traditional chiller.

girls's basketball gamers at traditionally black colleges are whistled at a SIGNIFICANTLY greater pr...
Nicole Scherzinger sets the record straight over THAT muttering on to Tess Daly on Strictly
MAGAbomber's hatred for Democrat mother who kicked him out drove him to idolize Trump, lawyer claims
From 'give 110 percent' to 'blue sky thinking' here's the most annoying office jargon of 2018
Remainers launch their bid to force a soft Brexit
The 'evil genius' behind Brexit who'll spread fear across Whitehall
Man who lost six family members in Grenfell says it's 'disgrace' it took so long for chief to quit
Tottenham endure a day of shame as Chelsea defender Antonio Rudiger is allegedly abused