has confirmed she will perform at Glastonbury 2019.

The Spinning Around hit-maker, 50, will take on the festival’s much-loved ‘Legend slot’ and perform on the Pyramid Stage – 14 years after she was originally scheduled to appear.

Taking to on Wednesday, Kylie revealed she is ‘thrilled’ to finally be appearing at Glastonbury, as she was forced to pull out of her performance in 2005 due to her past battle with breast cancer. 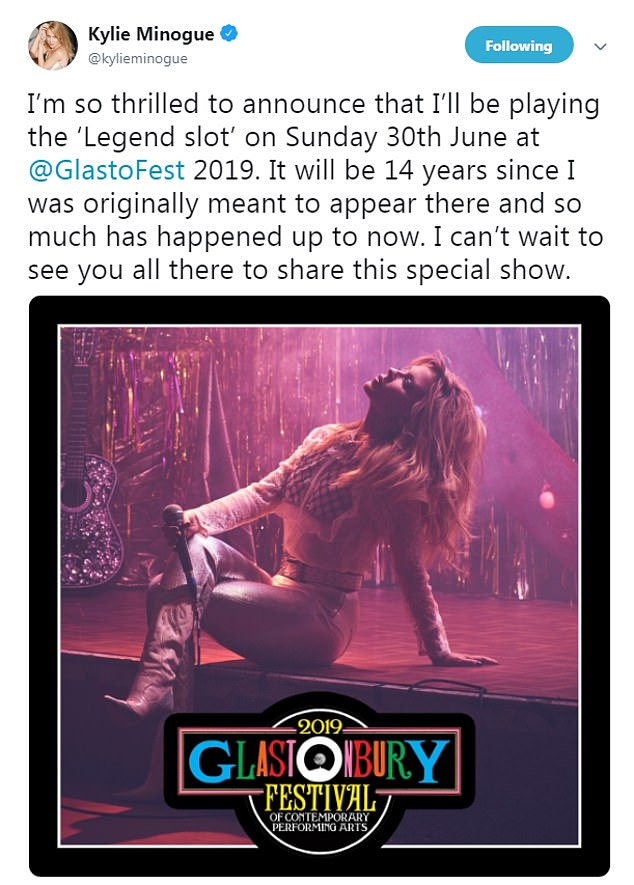 Thrilled: Kylie Minogue, 50, has confirmed she will be performing during the ‘Legends slot’ at Glastonbury 2019 – 14 years after she was first scheduled to appear at the festival

Sharing an official shot to promote her appearance at the annual festival, Kylie told fans: ‘I’m so thrilled to announce that I’ll be playing the ‘Legend slot’ on Sunday 30th June at @GlastoFest 2019.

‘It will be 14 years since I was originally meant to appear there and so much has happened up to now. I can’t wait to see you all there to share this special show.’

Kylie’s confirmation comes after speculation has been rife since last year over her appearance at Worthy Farm.

Glastonbury has seen an array of artists perform during its coveted legend spot, held on the final day on the Pyramid Stage, with Kylie following in the footsteps of musical icons Tom Jones, Dolly Parton, Shirley Bassey, Lionel Richie and Neil Diamond. 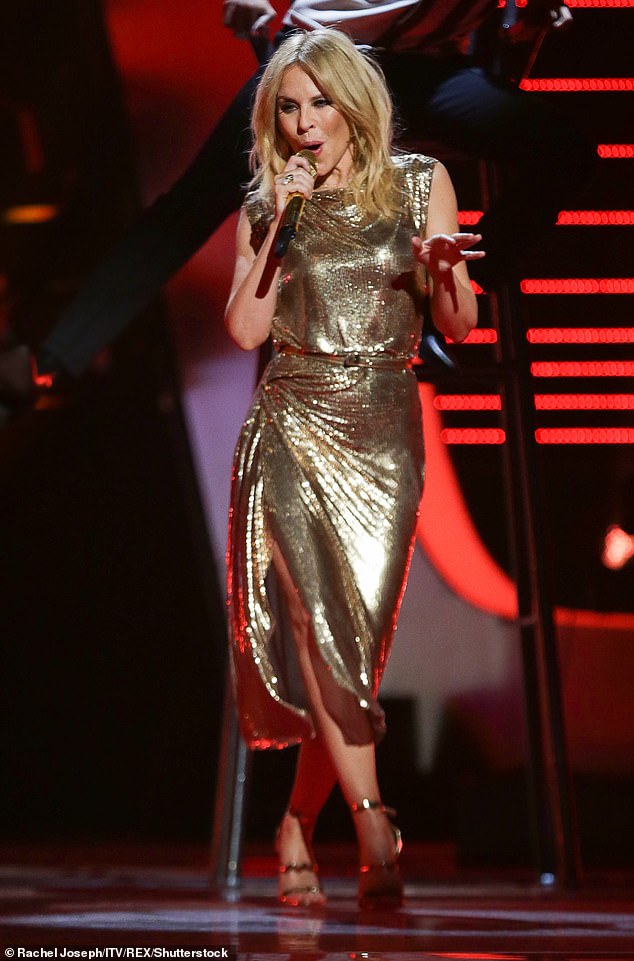 The Can’t Get You Out Of My Head singer reportedly signed up for the festival at the start of this year. She joins the likes of rapper Stormzy who has already been confirmed as the first headliner for the three-day festival.

A festival insider said at the time: ‘Kylie had to pull out of Glastonbury in 2005 just a month before she was due to appear so this performance will be a very emotional and poignant moment for her.

‘She jumped at the opportunity to appear next year and it is the perfect way to celebrate her career.’

Speaking to The Sun about performing at Glastonbury, Kylie said: ‘When I was supposed to do it, I think I would have been the first solo female to headline in however many years it was, so I was really proud of that at that time. 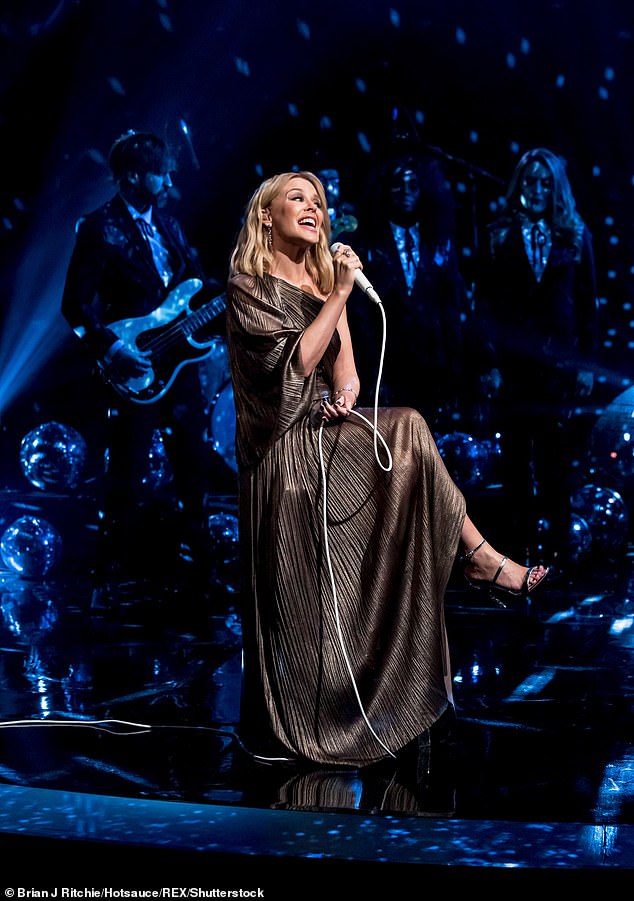 Poignant: Kylie was forced to pull out of her scheduled appearance 14 years ago due to her battle with breast cancer and has said her performance next year will be an ’emotional’ one

‘Obviously it didn’t happen. So yes, it would be amazing and very emotional to be standing there and doing what I didn’t get to do all those years ago, for sure.’

Kylie, who has had seven UK number ones during her three decade career, was yet to appear at the prestigious festival as a solo artist. She has however performed at Glastonbury as a guest, joining Scissor Sisters on stage in 2010.

She was forced to pull out of her scheduled appearance 14 years ago due to her battle with breast cancer. Kylie had received her diagnosis while in the middle of her Showgirl: Greatest Hits world tour.

After a partial mastectomy and rounds of radiation and chemotherapy, Kylie was given the all-clear the following year. 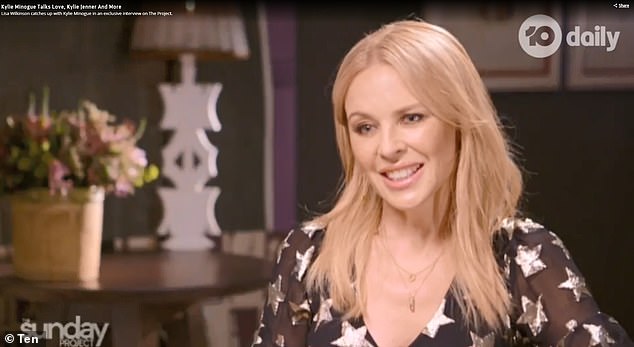 Memorable: The icon told The Sun: ‘It would be amazing and very emotional to be standing there and doing what I didn’t get to do all those years ago, for sure’

Speaking to Karl Stefanovic about her diagnosis on 60 Minutes in 2014, Kylie admitted that her cancer journey had taught her to put herself first.

‘Someone had said to me at the time, “You need to be a little bit selfish,” it’s not in my nature to be selfish, but now is the time to do that, let people take care of you… that’s what I did,’ she recalled.

The pop princess recently wrapped the European leg to her Golden tour, which saw her perform across the UK, and is set to take her show to her native Australia in March.

Her Glastonbury performance will round off an incredible year for the beauty, that has seen her make her musical comeback and turn 50.

Perfectly content, Kylie has gushed that life is ‘better’ since reaching the milestone, as she said: ‘Life’s, I won’t say a little bit, I’ll say a lot, better. Life’s great. Take that as you wish.’

She is currently dating  Paul Solomon – the creative director of British GQ. Originally from South Wales, the designer was first introduced to Kylie through mutual friends in February, earlier this year.

Kylie went public with her new man in April of this year as she finally mended her heartache 18 months after her bitter split from ex-fiancé Joshua Sasse. The former flames were together for two years and were engaged to be married before Kylie ended things with her ex in 2017. 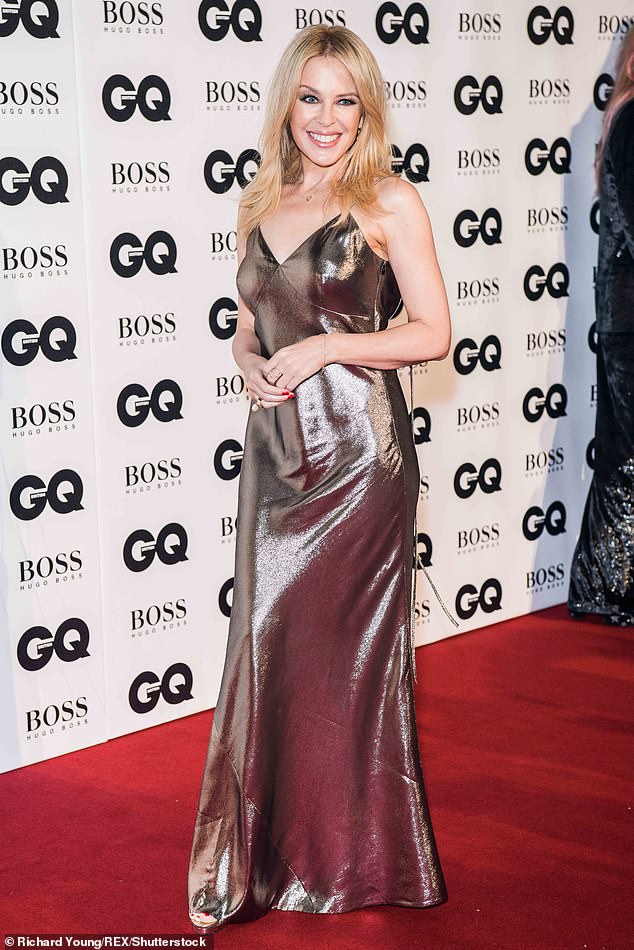 Exciting: Her Glastonbury performance will round off an incredible year for the beauty, that has seen her make her musical comeback and turn 50

Cheryl does an intricate stretch behind the scenes of The Greatest Dancer
Coleen Nolan reveals daughter Ciara, 18, told her to divorce Ray Fensome as she reflects on year
Taraji P. Henson dons Jenny Packham dress in NYC... after commenting on Jussie Smollett scandal
Stacey Dooley makes debut on Have I Got News For You
Brooke Boney's heartwarming tribute to her Aboriginal activist uncle in the wake of his passing
Home and Away star Ben Unwin found dead at notorious suicide waterfall
Khloe Kardashian shares photo of 'sweetest tribe' of cousins True, North and Penelope bonding
Madison Beer wraps her pretty pins in black PVC leggings as she pairs the look with a sweatshirt