High street banking giant Santander has been fined £32.8 million for failing to pass on £183m to beneficiaries of customers who had died – including £130,000 a Holocaust survivor wanted to give to children’s charities.

The Financial Conduct Authority (FCA) said Santander was guilty of ‘serious failings’  over the issue, which directly affected 40,428 customers.

Santander also failed to disclose information relating to the issues with the probate and bereavement process to the FCA after it became aware of them, according to the regulator. 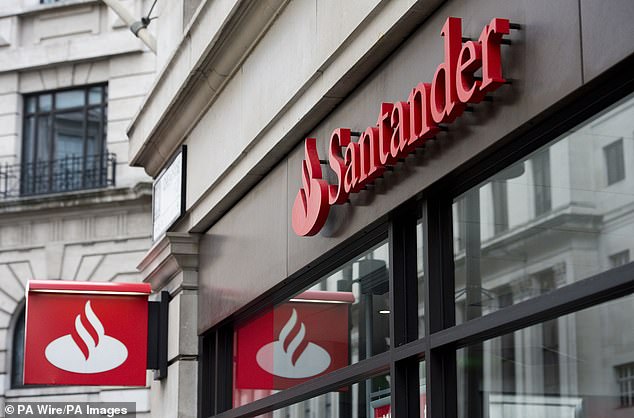 Santander did not transfer funds totalling over £183m to beneficiaries when it should have done, with 40,428 customers directly affected. Pictured: File photo of a Santander branch

The bank apologised to families of deceased customers who were affected by its errors.

Mark Steward, executive director of enforcement and market oversight at the FCA, said: ‘These failings took too long to be identified and then far too long to be fixed.

What to do about money when a loved one dies

Following a campaign by the Mail, you can now inform all major banks of a loved one’s death in a single step.

The Death Notification Service means grieving families no longer have to call multiple banks to inform them of a death.

Instead, they can fill in a form online — or make one phone call — and select which banks they want to be notified.

Previously, telephone numbers were tricky to find, staff didn’t know what was needed to fill in the relevant forms. Each company wanted different paperwork, and some of their letters were horribly insensitive.

‘To the firm’s credit, once these problems were notified to the board and senior management, they were fixed properly and promptly.

‘But recognition of the problem took too long. Firms must be able to identify and respond to problems more quickly especially when they are causing harm to customers.’

Santander said it has completed a ‘comprehensive tracing exercise’ and has transferred the majority of funds in deceased customers’ accounts to their rightful beneficiaries, with compensatory interest where appropriate.

The bank has also conducted a root-and-branch review of its probate and bereavement processes and brought in a raft of changes.

Nathan Bostock, Santander UK chief executive, said: ‘Santander is very sorry for the impact these failings have had on the families and beneficiaries affected. We accept the FCA’s findings and have fully co-operated with their investigation.

‘We have now transferred the majority of customer funds and made significant improvements to our whole probate and bereavement process, ensuring we provide both a sensitive and efficient service to our bereaved customer representatives and those who are managing the estates of people who have passed away.’

Haunting story of a Holocaust survivor’s forgotten £130,000 that triggered an investigation

The heart-rending story of Karl Lenobel, who spent much of his childhood in Nazi concentration camps, was one of the first to emerge out of the Santander probate scandal.

Karl was captured as a teenager in Vienna with his parents and moved from camp to camp until the war ended in 1945. He survived, but his parents perished at the hands of the Nazis.

The last thing he remembered his mother saying before she died was to look after his older sister, Katherine, who’d escaped to Britain before war broke out.

So, when Katherine’s husband died in the Nineties, Karl, who had emigrated to America to work as a sea merchant, moved to London. He stayed there until he died, aged 84, in October 2004. The inheritance of Karl Lenobel was put at risk after Santander failed to inform his solicitor of several accounts in his name. Pictured: A file photo of the train tracks leading to Auschwitz. It is not clear which camps Lenobel was held in

Because neither he nor Katherine, who’d passed away six months earlier, had children of their own, Karl left most of his savings to three children’s charities.

He told his solicitor, Geoffrey Greenhouse, that because he hadn’t had a childhood, he wanted to help make sure others didn’t miss out. Karl had been a prudent saver and invested the money he’d accumulated over the years in the stock market.

His sister had left him her life savings to pass on to the charities, too.

Mr Greenhouse acted on Karl’s wishes to the letter, closing the three Santander accounts in his will and distributing the money. Yet, inexplicably, the bank failed to inform Karl’s solicitor about two other accounts in his name.

Mr Greenhouse had no idea these accounts even existed until last November, when he received a letter from Santander stating that there was £127,338 in two Instant Saver accounts belonging to Karl.

The bank had made a note on the accounts that Karl had died, but had failed to contact Mr Greenhouse — even though it had his details on file.

At the time, May 2017, Santander said the problems first came to light around 18 months before, when it began investigating ways to improve its treatment of bereaved customers.