A coroner has warned parents of the dangers of co-sleeping with their newborns after two ‘perfect parents’ woke to find their baby son dead at the side of their bed after falling asleep next to him.

Keeley Makin and partner Nicky Marsh, would usually have one-month-old Archie sleep in his Moses basket in their bedroom at night, but one evening after a night feed, they placed the infant alongside them and one of their other children.

Later that morning the couple woke up to find Archie unresponsive and dialled 999. They attempted to revive the four week old but he was pronounced dead at the hospital. Experts said Archie died from sudden infant death syndrome. Further tests revealed he had sustained accidental rib fractures thought to have been caused by him being ‘squeezed side-to-side.’ 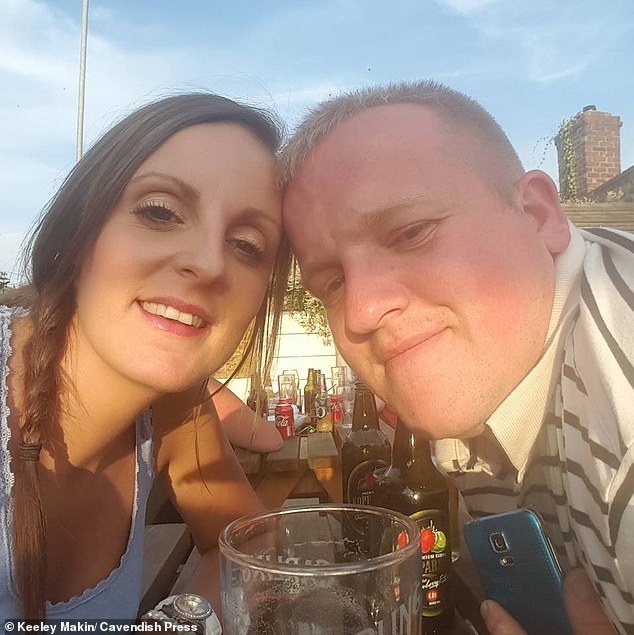 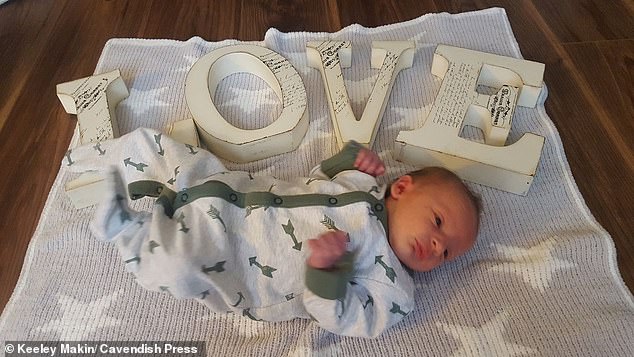 At an inquest in Greater Manchester, Miss Makin who is in her 20s and Mr Marsh who is in his 30s wept as police and a coroner called for greater awareness about the dangers of ‘co-sleeping’ following the tragedy on November 17 at the couple’s home in Atherton, Greater Manchester.

Recording a conclusion of an accidental death, coroner Alan Walsh said: ‘There are probably hundreds of thousands of parents who may have infants sleeping in their bed this evening. But every one of those parents potentially puts their child at risk.

‘He had no health problems apart from a cold. He was well looked after and on November 17 he had enjoyed a normal day. He was put to bed and woke up for his feed at about 1.30am. After the feed, he was placed in bed with his parents.

‘It is likely that that had happened with other children and there had never been any problems with that situation. Nobody could have foreseen what would happen in the next few hours and it is unimaginable to wake up and find a baby unresponsive. You have my greatest sympathy.’

The coroner also added that Archie did have injuries from co-sleeping, but that these were not the cause of death, but would have caused problems with his breathing which led to his death. 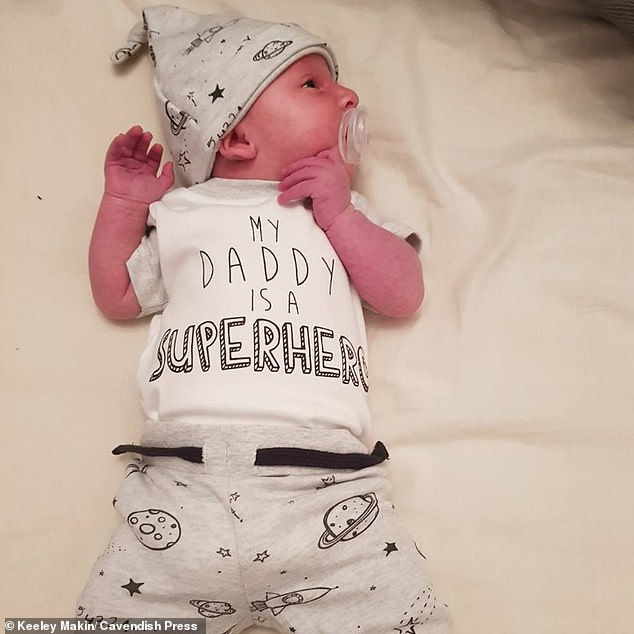 ‘Co-sleeping is a main factor in relation to sudden infant deaths. I have the benefit of dealing with deaths that arise from this.

‘One thing that can arise from Archie’s tragic death is an awareness. This is a risk that can be avoided and a death that can be prevented. You would never have imagined this would have happened. You provided the perfect home, you were the perfect parents and I am extremely sorry.’

The hearing was told on the day of the tragedy Mr Marsh had gone to work while Miss Makin stayed at their home to look after Archie. 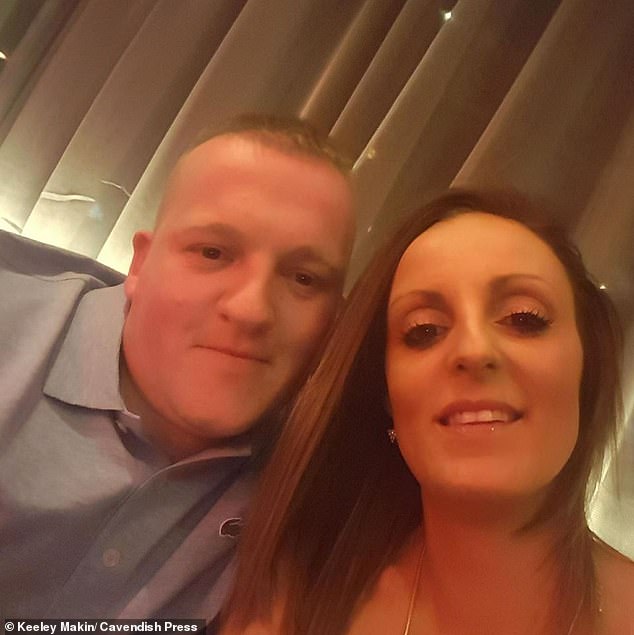 Keeley (right) and Nicky (left) have three other sons, one of which had been sleeping in their bed at the time of Archie’s death

When he returned from work that evening he went out to play football and then drank two cans of lager at home.

In a statement Miss Makin told the Bolton hearing: ‘Archie was our beautiful little boy. He was our fourth child, we already have three boys.

‘I had a healthy pregnancy with Archie and was induced before birth. I had a natural labour and Archie weighed seven pounds and three ounces. We were discharged from the hospital and could not wait to get him home. 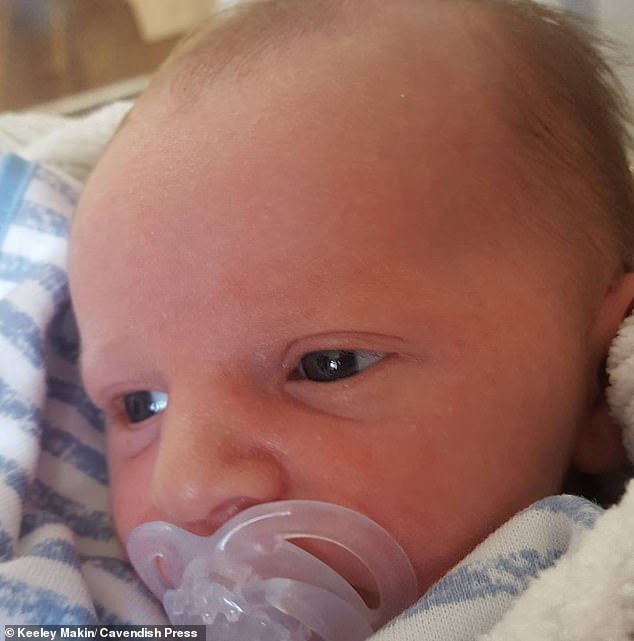 ‘On Friday November 17, Nicky left early for work and Archie stayed with me all day. Archie had been bottle-fed that day and was struggling to breathe as he had a cold. I spoke to a doctor on the phone about his cold.’

Miss Makin said that once Nicky returned home at 7pm, he had put Archie down to sleep in a Moses basket in the bedroom, before having his last feed at 8.15pm.

‘Nicky woke up at around 1.30am to feed Archie. In the bed that night our son and Archie’s older brother slept between us as he had been struggling to sleep, and Nicky was on the left. 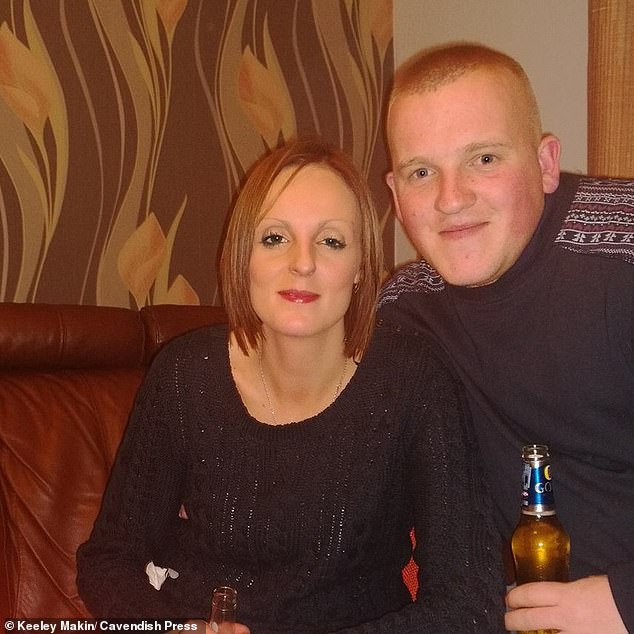 ‘Nicky fed Archie whilst he was in bed and we lay him on the left side on the edge of his bed instead of in his Moses basket. Nicky must have fallen asleep and then when he awoke he found Archie was unresponsive. We called 999 straight away and performed CPR.

‘Archie’s death came as a horrible shock for the whole family. We were all so excited for Archie to come along, his brothers were amazing with him. We did not get to see his first smile. Not a day goes by where we don’t think about our Archie. He will forever be in our hearts.’

He told the hearing: ‘We know that there is an increased risk of sudden infant death in children that co-sleep with adults. It is possible to block an infant’s airway, or to construct an airway. It is very, very unusual to find these rib fractures. Archie has been squeezed side to side. It is a massive thing that many parents do co-sleep with their infants. It is an increased risk and in my view it is not worth taking.’

Det Insp Nathan Percival from Greater Manchester Police said: ‘There was no previous history or anything that caused any concern in relation to the family. Nicky mentioned going to football practice that evening and having a couple of cans of lager on return. There was absolutely no suggestion of any more than that, two cans were found at the address.

‘I could tell that they were caring and doting parents. The home address, a lovely family, caring home. There were photographs and toys everywhere. It was just a lovely family environment. It could be described as a perfect home for them to be brought up in.

‘There was nothing suspicious or any evidence of any third party involvement in the death.’

He added: ‘These deaths are preventable, certainly coming up to this time of year when it is around the Christmas period and alcohol is consumed this gives us some concern. There could be 20 children and you only get one incident, but that one incident is preventable.

‘The key for myself and the police in general is that these deaths are preventable, this can happen to the most caring and doting parents. We just want to get the message across to have separate sleeping areas and separate feeding areas.’

WHAT IS COT DEATH AND HOW CAN IT BE PREVENTED?

Sudden infant death syndrome (SIDS), or cot death, is the sudden, unexpected and unexplained death of an apparently healthy baby.

It usually occurs within the first six months of an infant’s life and is more common in those born prematurely or of a low birth weight.

The cause of SIDS is unknown, however, it is associated with tobacco smoke, tangled bedding, co-sleeping with parents and breathing obstructions.

Prevent the risk by: