Jeremy Corbyn faced ridicule today after Labour insisted it would only call a real confidence vote after the Government has ‘failed decisively’.

The Labour leader tried to call a stunt vote in Theresa May personally last night – a move short of what is needed to collapse the Government and force an election.

But Downing Street rebuffed Mr Corbyn’s plan for a non-binding vote and dared him to use his full powers to call a proper challenge.

Many suspect Mr Corbyn is reluctant to call a full vote because he knows he would lose and would have to confront whether to back a second EU referendum.

The Labour leader appears determined to deliver Brexit on his terms in defiance of his party activists but knows he does not have the votes to force and election.

The latest climb down came after a shambolic day where Mr Corbyn’s team threatened a vote only for the Labour leader to never issue his motion – prompting Labour MPs to claim victory based on the threat alone.

Despite a social media blitz the Mr Corbyn appeared to change his mind and table his motion anyway despite there being no way to force a vote on it. 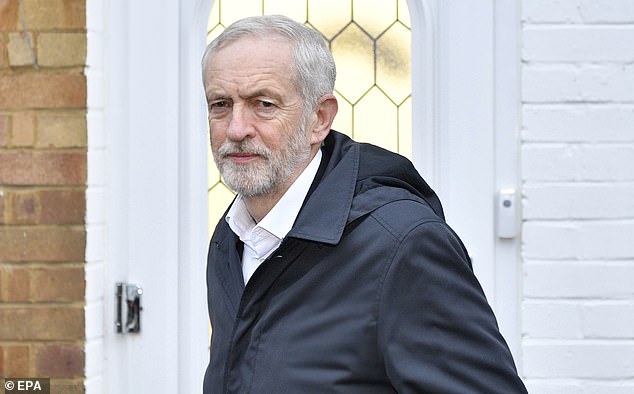 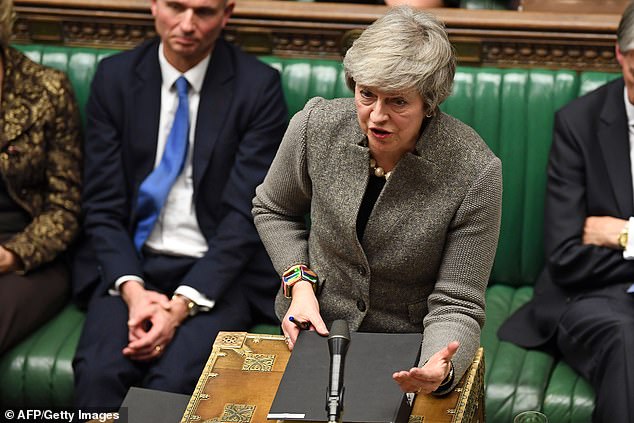 Shadow housing secretary Mr Healey said a full motion of no confidence would be tabled “when it’s clear to the country the Government has failed decisively”.

“It is still a question of when, not if, we move to confront the Government with a full vote of no confidence,” he told BBC Radio 4’s Today programme.

She said: ‘It’s clear now that Labour frontbench is holding back on vote of no confidence in the government because it is hostile to Final Say referendum.’

Chris Leslie added: ‘We can all see what’s going on here now.

‘Labour leadership holding back from proper vote of no confidence in HM Government because they don’t want to advance a public vote on Brexit.’

Last night Labour was denied Parliamentary time by the Government for its stunt motion – but Mrs May dared Mr Corbyn to call for a vote of a no confidence in her Government.

What is Jeremy Corbyn proposing?

Jeremy Corbyn has said there should be a vote of no confidence in the Prime Minister if she does not set a date for a vote on her Brexit deal.

Can this force her to resign?

Not automatically – but a confidence vote against the PM would be very damaging and lead to calls for Theresa May to quit.

Can it force an election?

No. A motion of no confidence in the Prime Minister is not the same as one in the whole Government. Only the second version is enough under the Fixed Term Parliaments Act to start a countdown to the election.

Why is Corbyn doing this?

Mr Corbyn wants the vote on Brexit deal before he tries to do a full-blown confidence vote. He believes Mrs May will lose a vote on her deal and that will make her more vulnerable to a proper confidence motion.

It depends. Labour can call debates on whatever it likes on Opposition Days – usually Wednesdays. But is has no more time this year to call debates.

Downing Street dismissed Labour’s ‘silly political games’ and said it would not grant time for a vote of no confidence in the Prime Minister.

But a source said ministers would only make time for a vote if the Labour leader had the nerve to table one against the Government.

Given the risks of such a move, it suggests she has now secured the backing of Tory Brexiteer rebels and the Democratic Unionist Party – who prop up her Government.

A Downing Street source said: ‘We won’t allow time for what is a stunt.’

But, making reference to the vote that would automatically be triggered by a no confidence motion against the Government, the source added: ‘The Fixed-Term Parliaments Act applies if Labour wants to put down a motion under the terms of that.’

Mr Corbyn’s theatrics earlier appeared to have had a galvanising effect on warring Tory MPs, who staged their own vote of no confidence in the PM’s leadership just last week.

Jacob Rees-Mogg, chairman of the pro-Brexit European Research Group (ERG) which led last week’s attempted coup, yesterday told the PM he now accepts the 200-117 vote in her favour and backs her.

An ERG source said the 80-strong group ‘will of course be voting with the Government on this meaningless Labour motion’.

And former Brexit minister Steve Baker, who submitted a vote of no confidence in Mrs May last month, said: ‘Eurosceptic Conservatives are clear that we accept the democratic decision of our party to have confidence in Theresa May as PM.

‘We will vote against Labour in any confidence motion.’

DUP deputy leader Nigel Dodds said: ‘We are not interested in the Parliamentary antics or play-acting of the Labour Party.’ 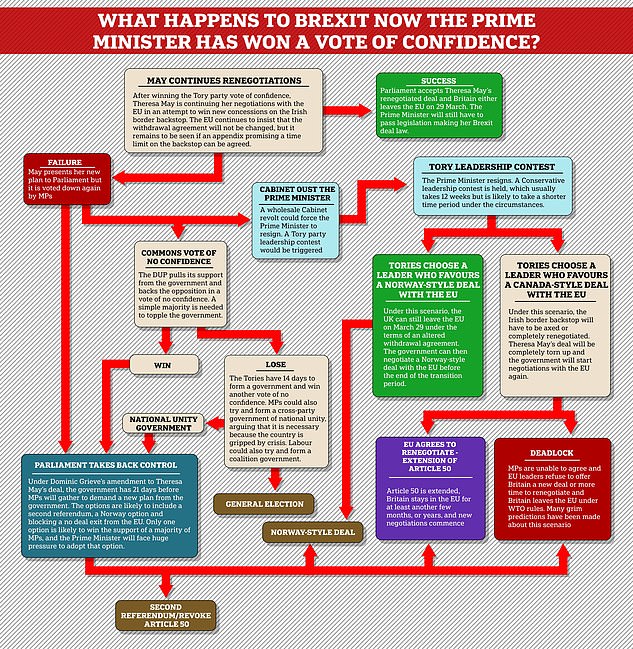 Yesterday’s events unfolded as Mrs May prepared to address MPs on the future of her Brexit deal in the wake of last week’s Brussels summit, from which she emerged virtually empty-handed.

At 3pm yesterday, Labour briefed that Mr Corbyn would call for a confidence vote if Mrs May failed to announce that a meaningful vote on the Brexit deal would take place ‘promptly’.

What are the types of confidence vote that the PM can face?

1. Vote of confidence in the Prime Minister

Today’s vote as suggested by Mr Corbyn expresses his lack of confidence in the Prime Minister, not in her government as a whole.

The Commons Leader is only obliged to make time for a confidence vote in the Government itself.

That means that if Corbyn had demanded a vote into Mrs May’s administration rather than the prime minister herself, it could not be dismissed.

2. Vote of confidence triggered by sitting prime minister’s own MPs

The Prime Minister has already been forced to hold a vote of confidence to be decided by members of her party.

This occurred because the Tory 1922 Committee announced the threshold of 48 letters expressing no confidence in Mrs May had been reached. She survived the vote with a majority of 83 MPs.

3. Vote of confidence in the government demanded by Leader of the Opposition

Only the Leader of the Opposition has the power to demand this vote. The Fixed Term Parliaments Act requires the Leader of the Commons to submit to such a vote, which could then topple the prime minister from her position.

The announcement came as the party received a copy of Mrs May’s statement in which she announced that the vote, delayed from last week, would now take place in the week beginning January 14.

In his response to Mrs May in the Commons, Mr Corbyn made no mention of the no confidence vote plan and appeared to have abandoned it.

Mr McDonnell then told Channel 5 News that the idea had been scrapped because ‘we got what we wanted’.

But minutes later, Mr Corbyn told MPs that Labour would press for a vote after all.

He said: ‘It’s very clear that it’s bad – unacceptable – that we should be waiting almost a month before we have a meaningful vote on the crucial issue facing the future of this country.’

Mrs May sat with a defiant grimace on her face and listened to the Labour leader before walking out of the Commons chamber.

It comes as the government’s legal advisor said Parliament could extend Article 50 to buy more time by holding a simply vote.

It is believed that Article 50, the mechanism for leaving the EU, would have to be extended beyond March 29 if Britain decides to hold a second referendum.

Robert Buckland said extension would not require fresh legislation, just a one-off vote in the Commons.

He said: ‘I think the better view would be that legislation would be necessary. I think we would have to repeal the EU Withdrawal Act.

‘Revocation is one thing but delaying Article 50 is another matter that can be done by a minister laying a statutory instrument to vary exit day – it’s there as part of a power.’

Mr Buckland also suggested MPs could be given a free vote on the Brexit way forward.

‘I think if all the parties agreed to it then it’s something that might well work, but I think it would be imbalanced if one party did it and the other did not,’ he said.

What Brexit options could MPs vote on if May’s deal fails?

More than half a dozen Cabinet ministers are pushing for Parliament to vote on ‘options’ for how to proceed if Theresa May’s deal fails.

Here are some of the possibilities that could be considered:

MPs from across parties have been mooting the idea of a Norway model.

It would effectively keep the UK in the single market, with a customs bolt-on to avoid a hard Irish border, and backers say it would keep Britain close to the EU while cutting contributions to Brussels.

However, critics say it has the drawbacks of keeping free movement, – and tightly limiting the possibilities for doing trade deals elsewhere.

The EU is also thought to have concerns about a country the UK’s size joining the EEA, while other states in the group might be resistant.

The so-called ‘People’s Vote’ campaign has been pushing hard for another national vote, with cross-party backing.

MPs would almost certainly want to be asked to back the idea in principle.

The Article 50 process would probably need to be extended to facilitate a referendum, but the EU seems open to that possibility.

However, the biggest problem is likely to be that even if the Commons can agree on holding a vote, they will be be completely split over the question.

Some want it to be a rerun of 2016 with Remain v Leave. Others say it should be May’s deal against no deal.

There are also those who support two rounds of voting, or multiple choice.

Brexiteers have been demanding the UK takes a different approach this time, seeking a looser Canada-style arrangement with the EU.

The arrangement they want would be a relatively clean break from the EU, with the ability to strike trade agreements elsewhere.

But it would fall far short of the low-friction access urged by Labour and large numbers of Tories.

Brexiteers have been floating a ‘managed’ no deal which could feature in the votes.

It would involve the UK offering the EU billions of pounds to secure a transition period, even if there is no wider deal.

However, there is little sign that the EU is ready to agree.

Kate and Meghan are all smiles as they join the Queen at church in Sandringham
Handshakes could be banned in British offices
Britain's five-a-day obsession is triggering a frightening new allergy
Trump's hair mocked on Twitter as he makes surprise visit to church
How you should briskly walk 15,000 steps a day to get the maximum health boost
Ghislaine Maxwell's boyfriend Scott Borgerson 'attacked' his ex-wife during their marriage
Sixth title for Lewis Hamilton: Delight as British F1 ace wraps up drivers' championship in Texas
Did Amber Heard swap face masks with her sister Whitney?