An incredible treehouse that comes with 64 diamond-shaped windows to form an 11,000-pound pine cone that dangles high in the trees of the Californian Redwoods is on the market for $150,000.

Dustin Feider, of in Oakland, is the brains behind the design of the unique building which was built earlier this year for home goods company S.C. Johnson and their Glade fragrance line.

‘They gave me artistic freedom,’ says Feider to whose company has built more than 60 treehouses since its founding in 2006. 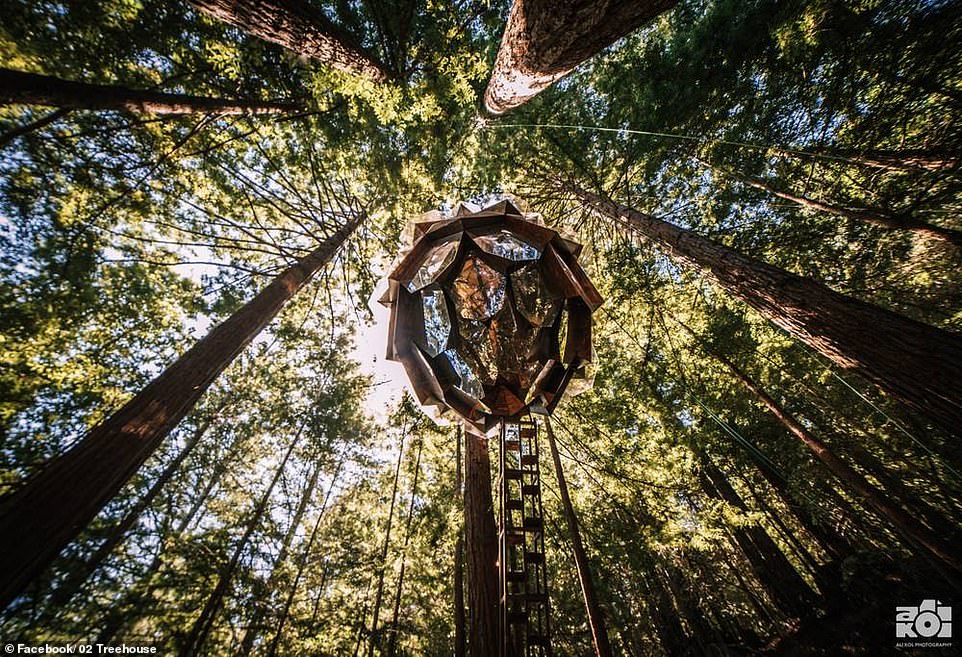 The Pinecone Treehouse: This eye-catching home is located in a forest in Oakland, boasting a geodesic dome shape constructed from steel and California redwood 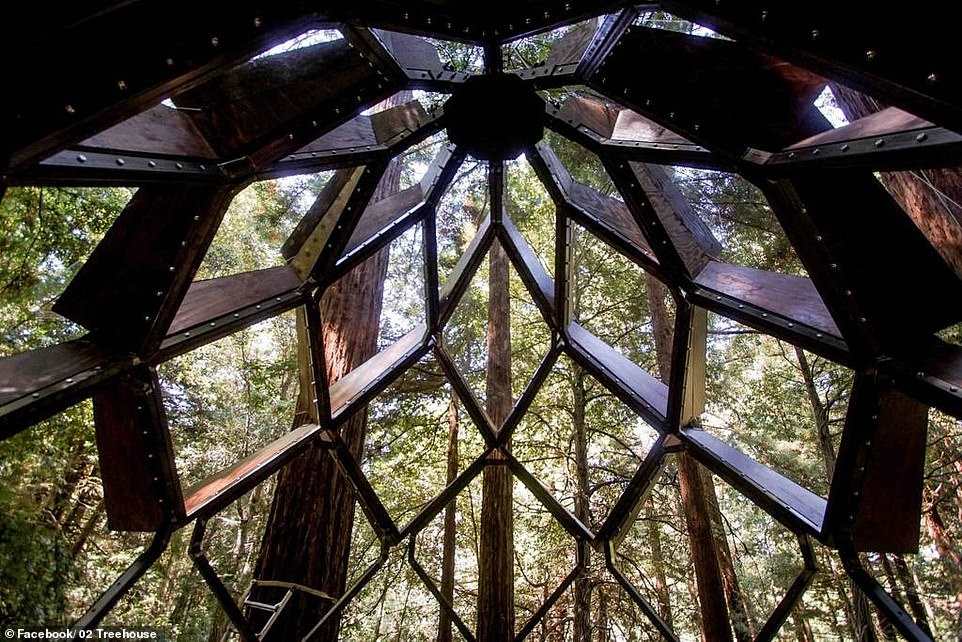 Inside the windows boast a symmetrical pattern that resembles a kaleidoscope 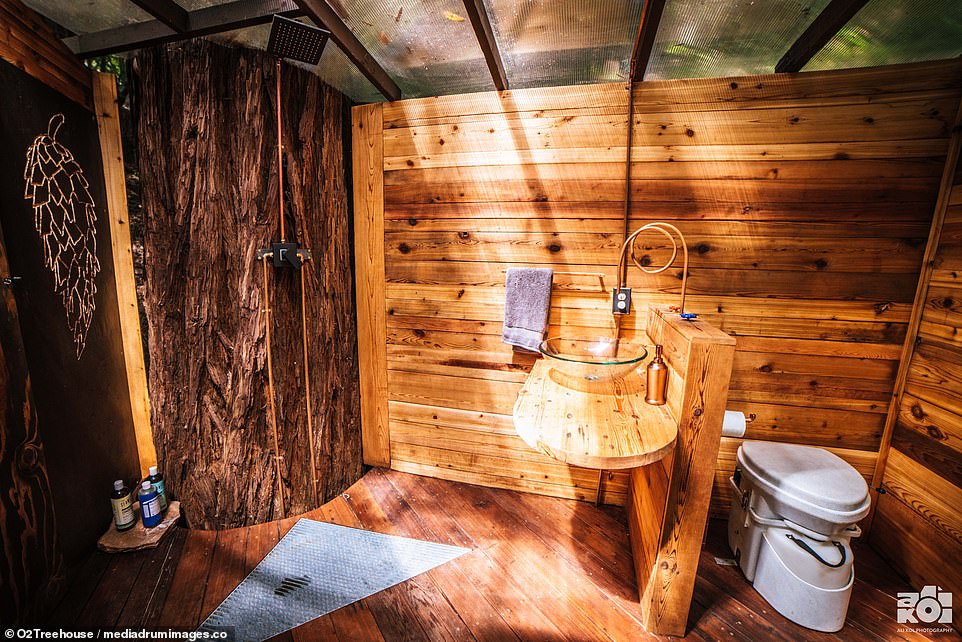 ‘They wanted something clear and crystal that represented the smells of the forest.’

Made of steel and wood, the light-filled home seems to effortlessly float into the air.

With two triangle shaped see through floor panels the treehouse makes one feel as though they are flying through the upper Redwood canopy.

The geodesic dome which is modeled after a pine cone can be accessed by climbing a steep ladder and then crawling through a trapdoor. 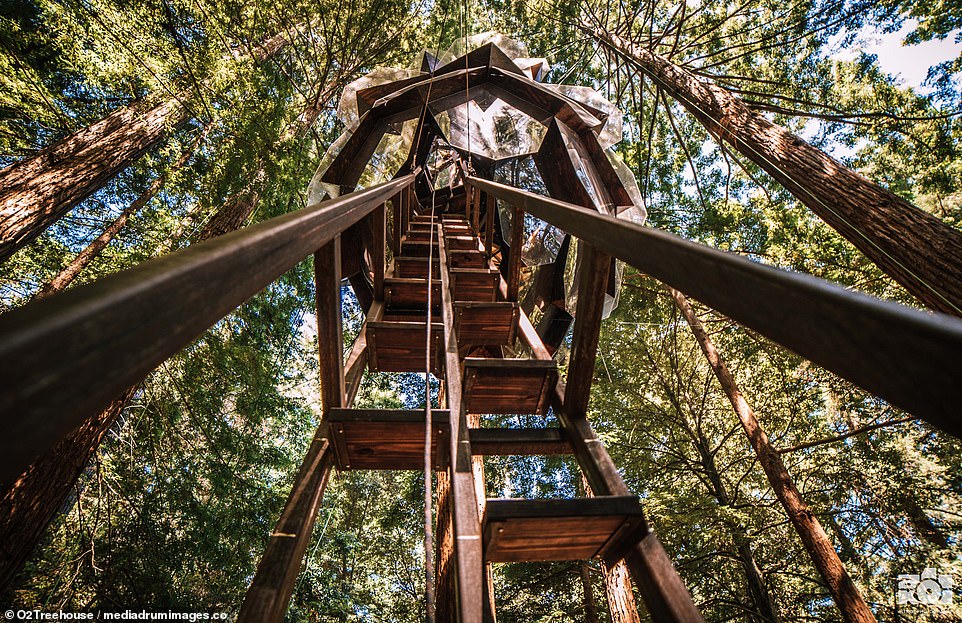 The structure is accessed via a 30′ – 60 degree alternating step access ladder. Guests are encouraged to use the harness and ascension safety system 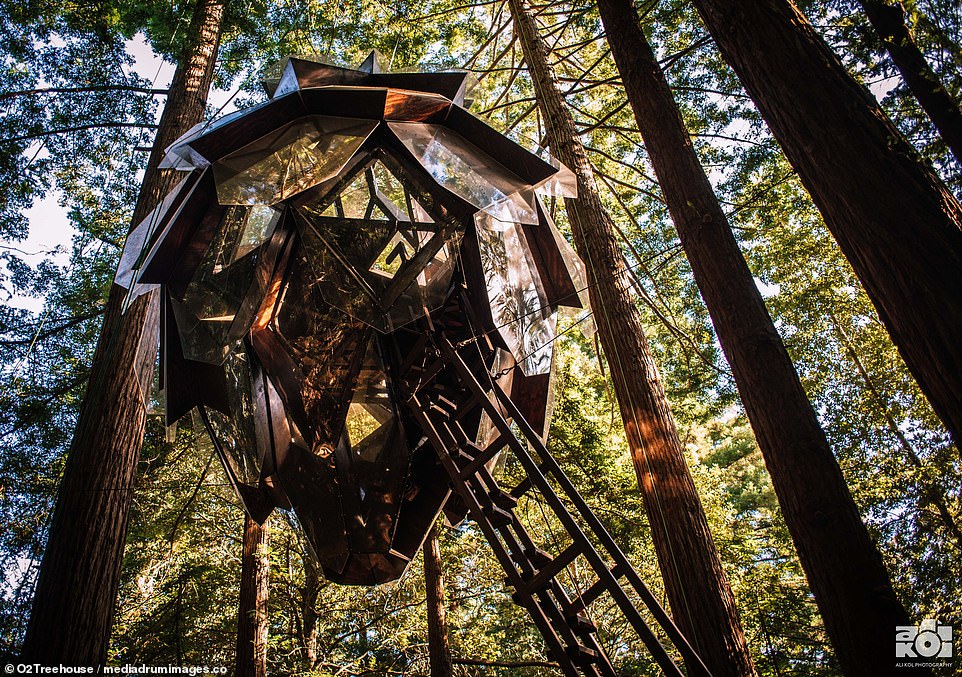 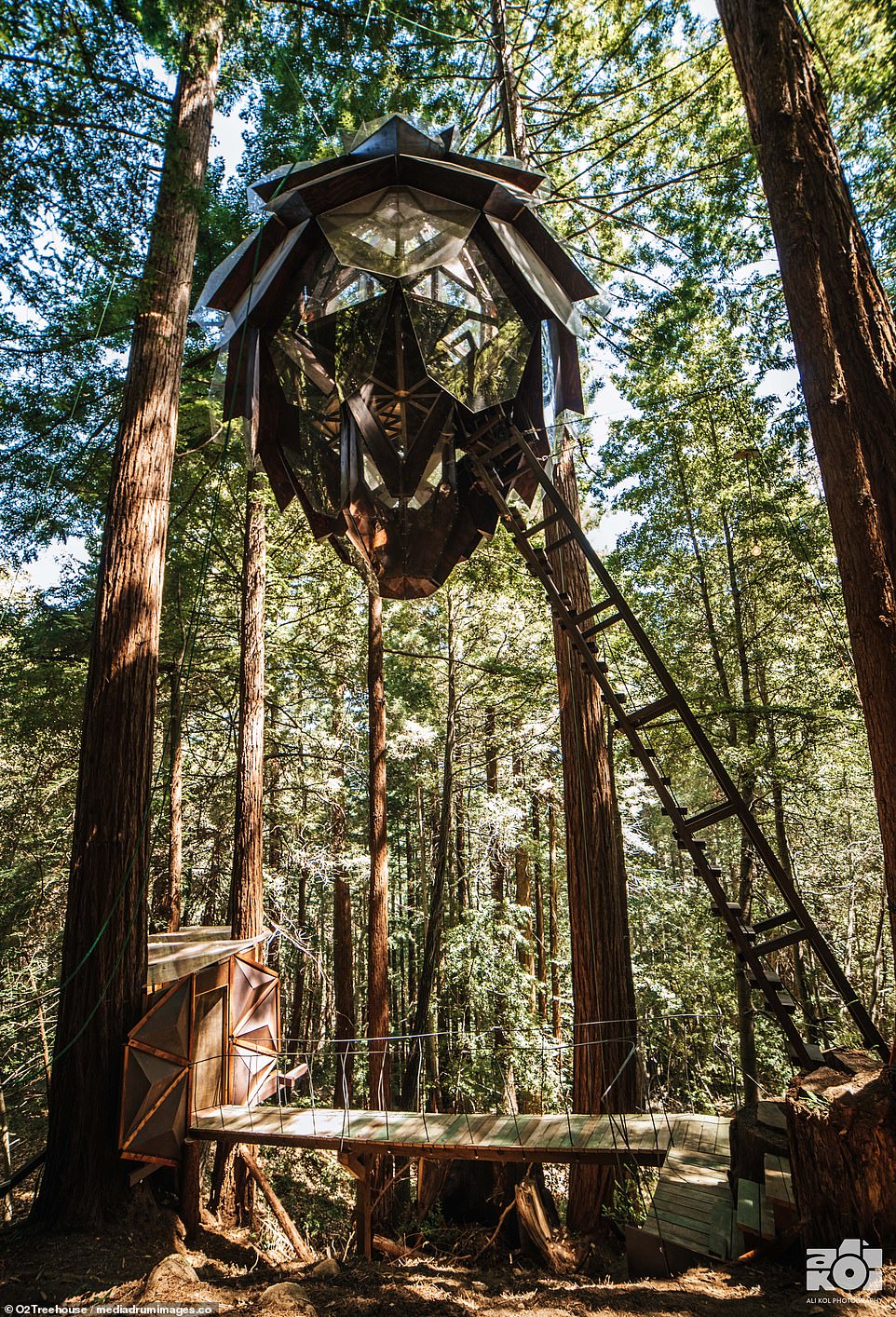 Made of steel and wood, this light-filled treehouse seems to effortlessly float 35 feet into the air 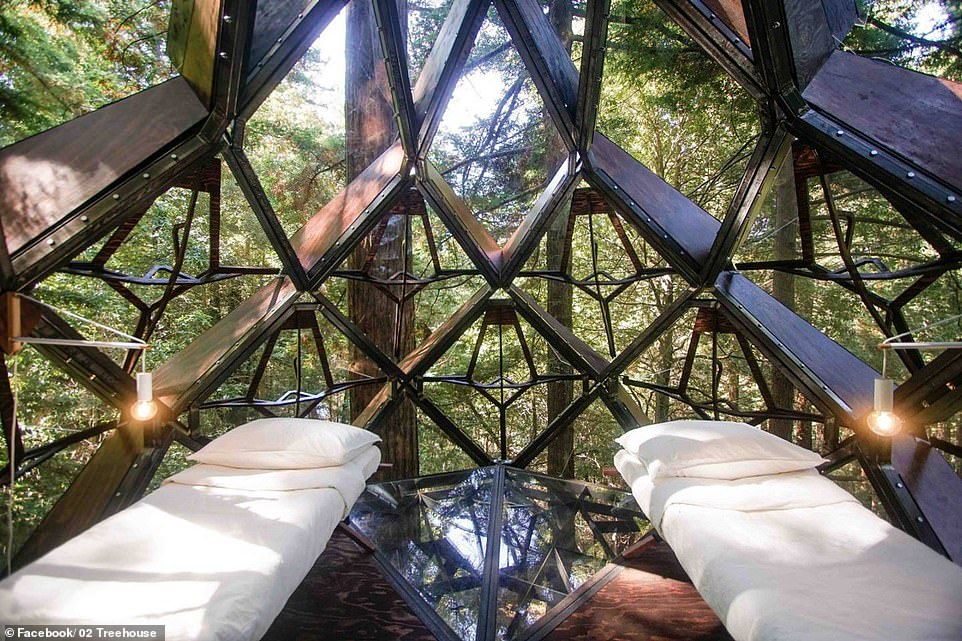 At 102 square feet, the space is big enough for two twin beds while the windows allow guests to enjoy the forest canopy with 360-degree views.

The treehouse features multiple glazed panels resembling the cone’s scales, providing unrivaled views of the surrounding landscape. Inside the windows boast a symmetrical pattern that resembles a kaleidoscope.

The unique residence also includes a ‘skillfully hand-crafted indoor/outdoor bathroom connected to the treehouse via wooden catwalk,’ according to the listing on the O2 Treehouse website.

There is a rustic bathroom downstairs with a hot shower, composting toilet, and sink. 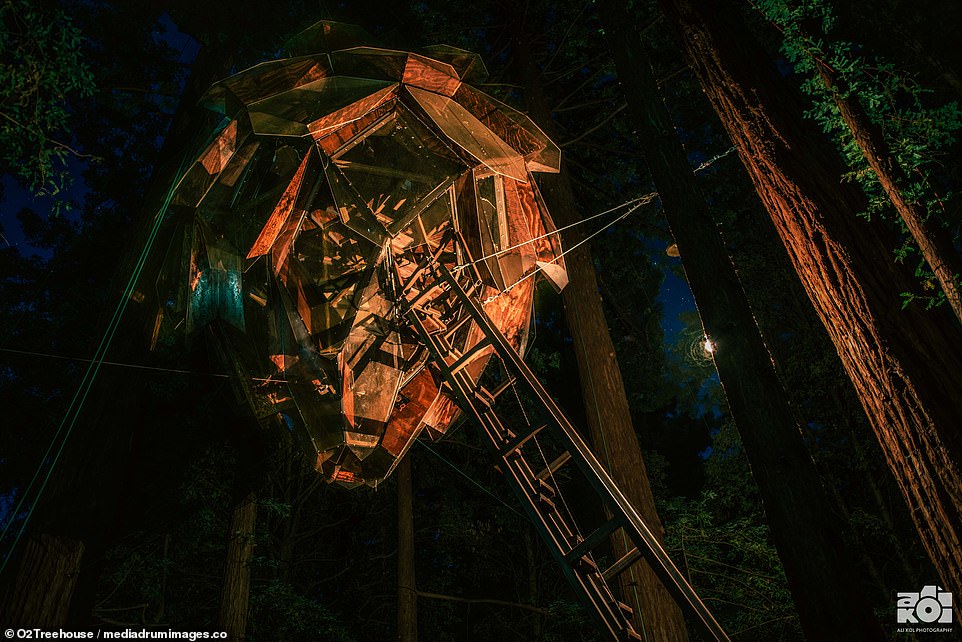 The treehouse because of its full surround windows can get a bit chilly at night. Additional blankets are provided in the treehouse should they be needed 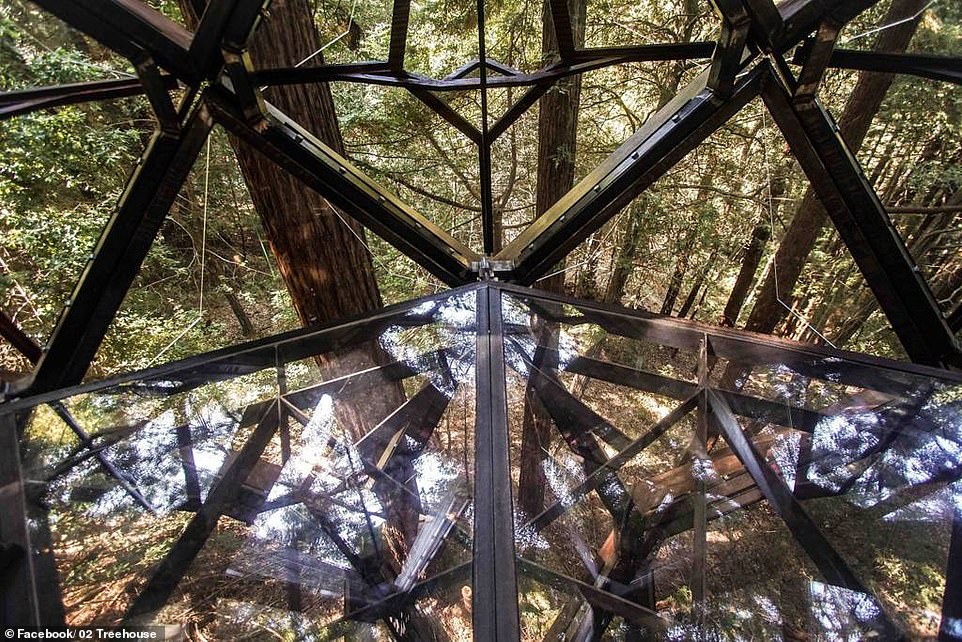 After renting the structure on Airbnb for $300 a night, O2 Treehouse is now selling the Pinecone. The sale includes the pinecone structure, the bathroom, and the catwalk 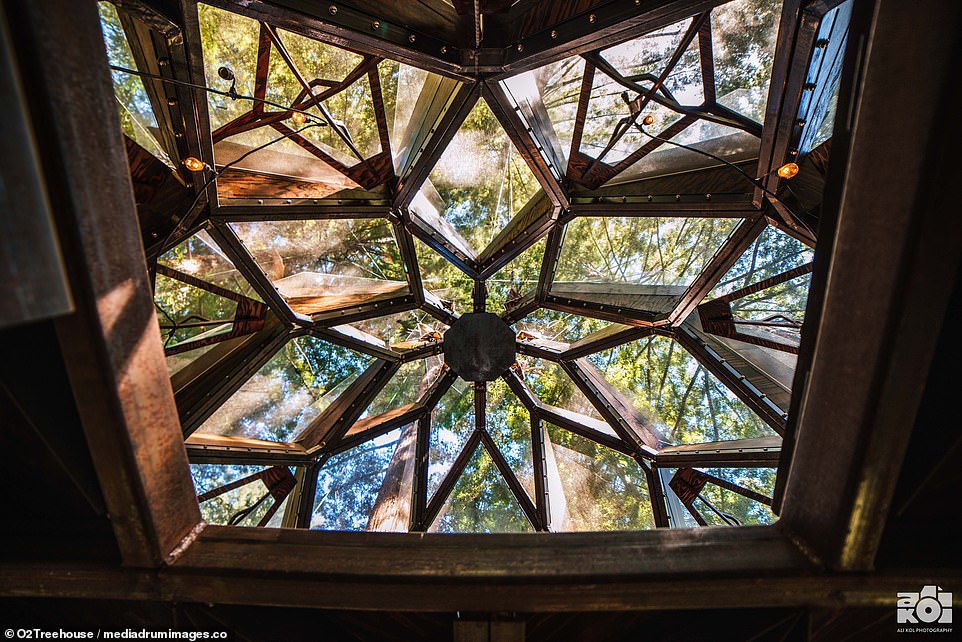 The O2 Treehouse team are unsure of exactly how much the Pinecone will cost, in large part because the price will depend on installation fees at a new location. The y did, however, say that it would be priced at a minimum of $150,000. 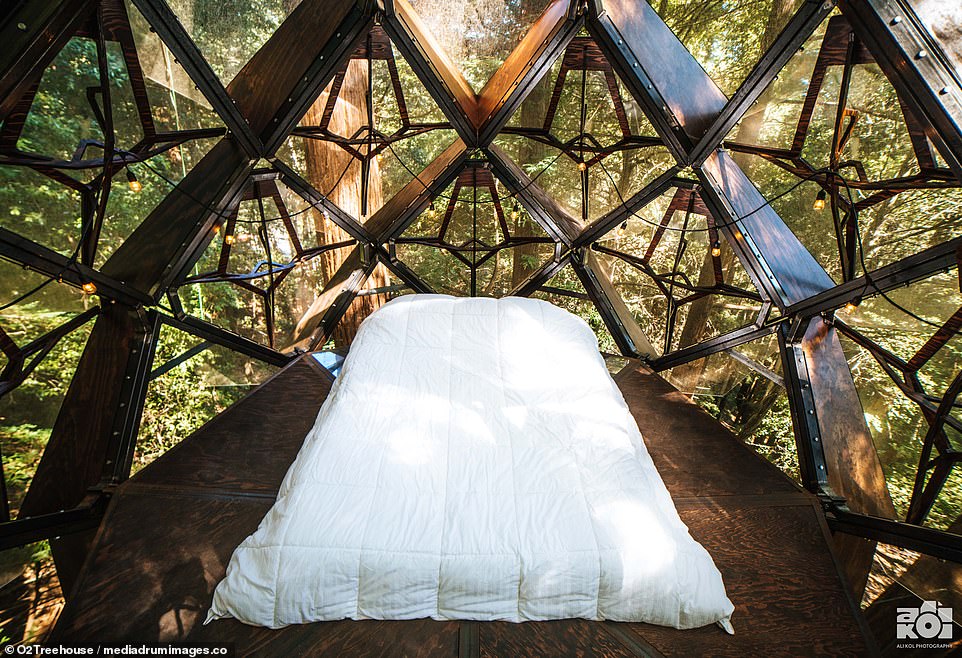 The asking price isn’t firm as O2 Treehhouse say they would also need to figure out installation costs at a new location.

The reviews on the AirBnb listing for the treehouse are nothing but positive: ‘In one word: MAGICAL. The pictures don’t even do it justice. An incredibly well built piece of art that you get to sleep in while surrounded by nature. It is truly the most magical airbnb experience you’ll ever have,’ wrote one guest.

‘There is nothing like waking up in the foggy treetops. We didn’t want to get out of bed. It was so beautiful and peaceful,’ said another.

‘The pine cone house was amazing and unique! It was so much fun! The best place I have stayed at to date. It was surreal to be hanging among the redwood trees. The shower with the redwoods and view was also neat,’ wrote another AirBnb-er. 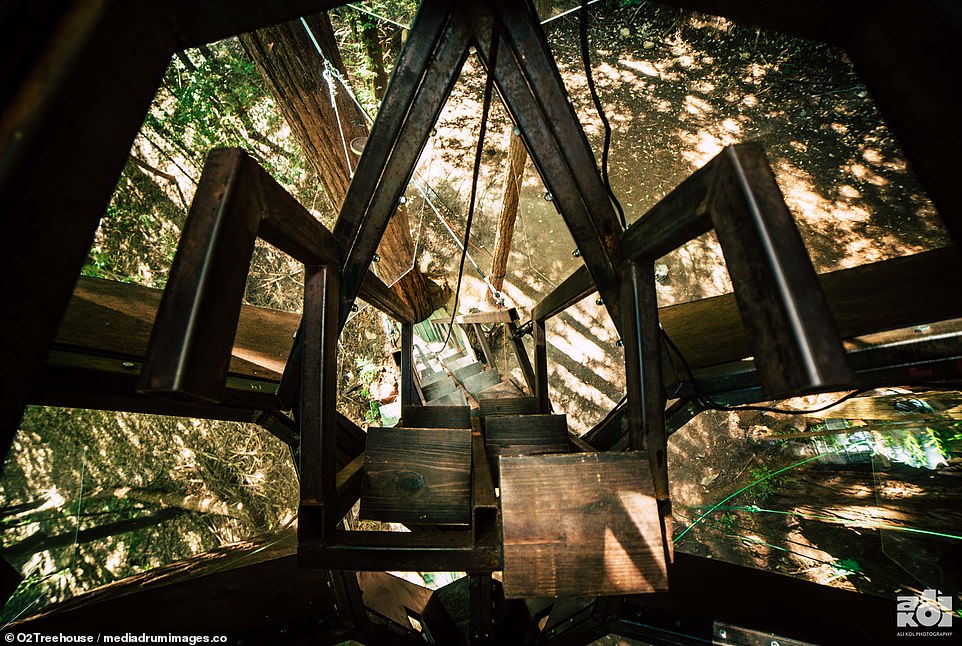 Suspended from the trees in Oakland, the geodesic dome modeled after a pine cone can be accessed by climbing a steep ladder and then crawling through a trapdoor 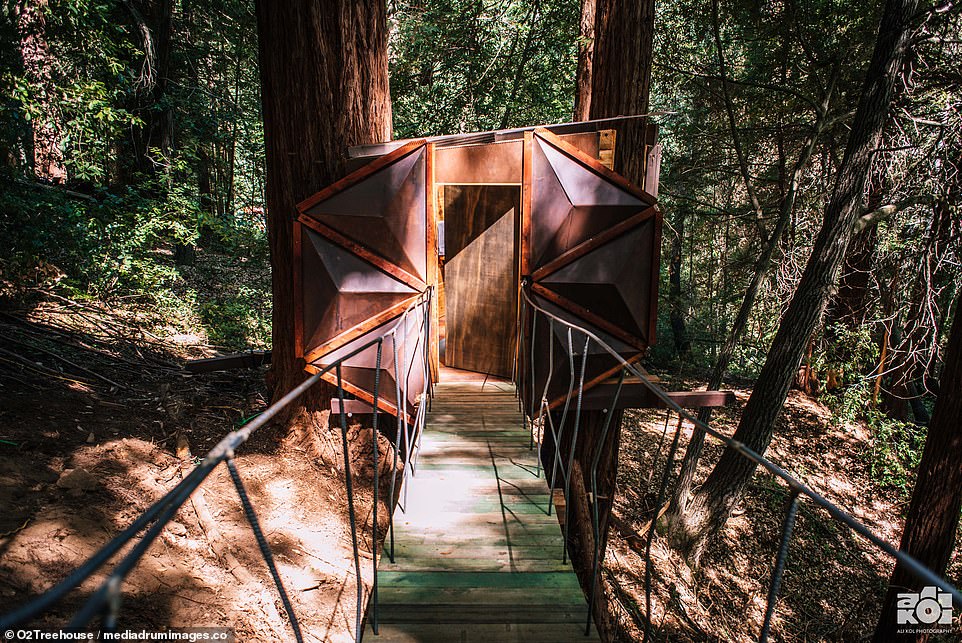 There is a rustic bathroom downstairs with a hot shower, composting toilet, and sink 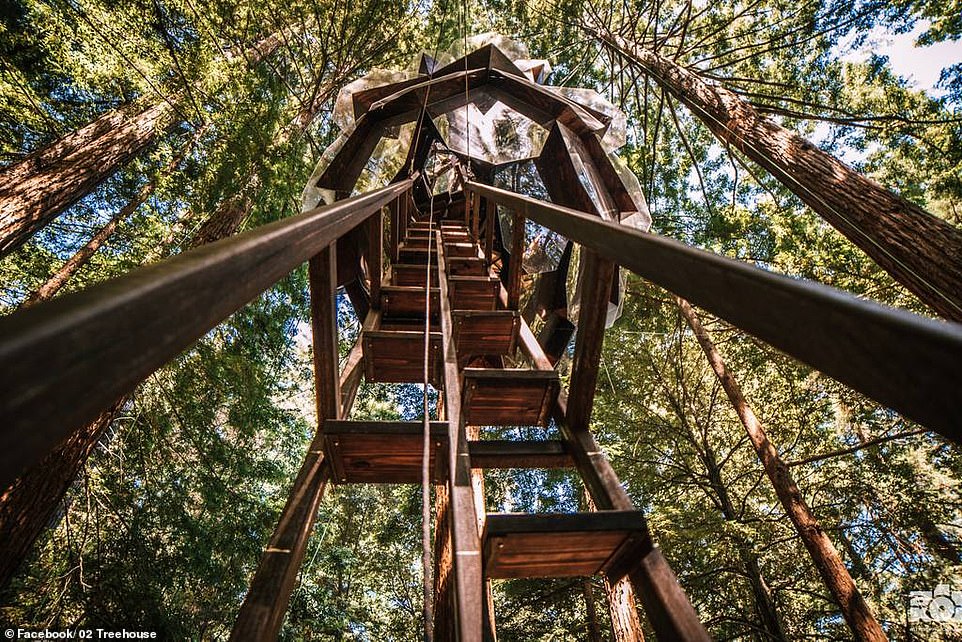 Dustin Feider, of O2 Treehouse in Oakland, is the brains behind the design and says the work was built earlier this year for home goods company S.C. Johnson and their Glade fragrance line 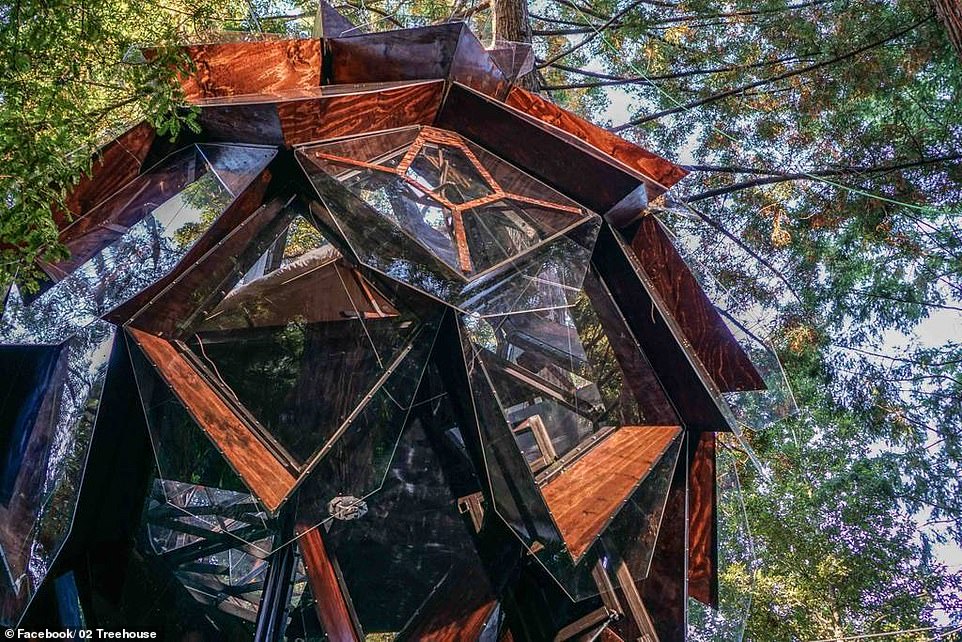 Walmart parking lot transformed into a cold and cramped campsite for desperate wildfire evacuees
The Crown series 3: Helena Bonham Carter and Ben Daniels star as Princess Margaret and Lord Snowdon
Bristol Palin opens up about her relationship with both her exes in candid Q&A
Tony Awards 2019: Emily Ratajkowski, Marisa Tomei, and Rachel Brosnahan rule the red carpet
A cure for baldness is on the way using human stem cells
Handyman, 36, is arrested over death of original Disney Mouseketeer Dennis Day, 76
Bitcoin pioneer Craig Wright is ordered by US court to hand over up to $5B
Top diplomat said Trump wanted the Ukrainian president to issue statement on Biden and CLINTON