President Donald Trump blasted Democrats opposing his border security policies Monday as company men and women who won’t write him a giant check for his border wall out of loyalty to the Democratic Party.

Trump needled the other side as the calendar moved one day closer to a fissure that would see parts of the government closed down and an expected 350,000 federal workers furloughed over the Christmas holiday.

He said in a tweet: ‘Anytime you hear a Democrat saying that you can have good Boarder Security without a Wall, write them off as just another politician following the party line. Time for us to save billions of dollars a year and have, at the same time, far greater safety and control!’ 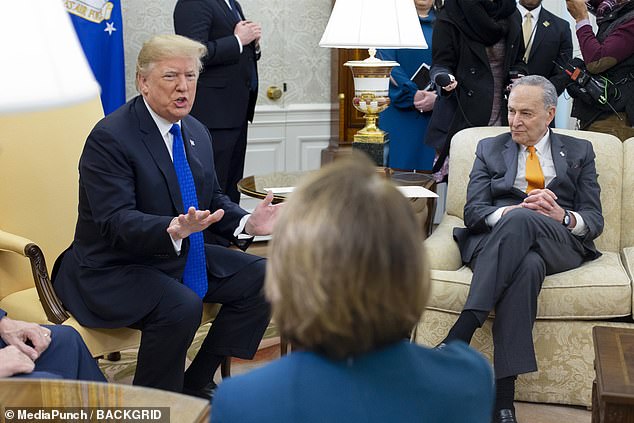 The president’s Monday morning push for his wall followed a warning by his top policy adviser that Trump could follow through on his threat to let the government close at the end of the day on Dec. 21 if they continue to reject his demands for a $5 billion appropriation for border barriers that are more sturdy than fencing.

White House senior adviser Stephen Miller on Sunday said ‘if it comes to it’ the administration would ‘absolutely’ shut down the government to fund a border wall as President  defended his policy on .

‘We’re going to do whatever is necessary to build the border wall to stop this ongoing crisis of illegal immigration,’ Miller said on CBS’ ‘Face the Nation.’

Asked if that meant a shut down when the government runs out of funding on Friday, he replied: ‘If it comes to it, absolutely.’ 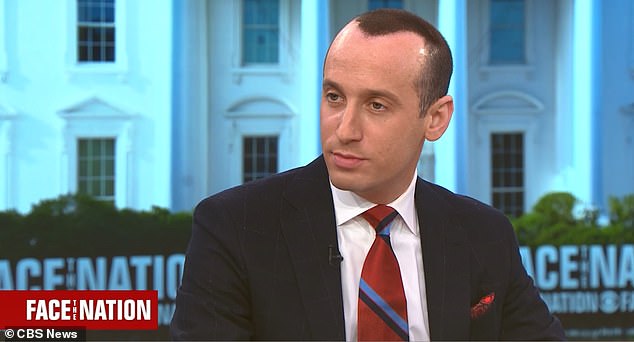 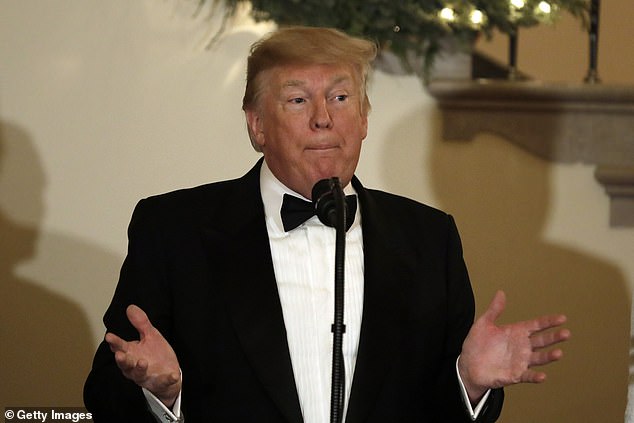 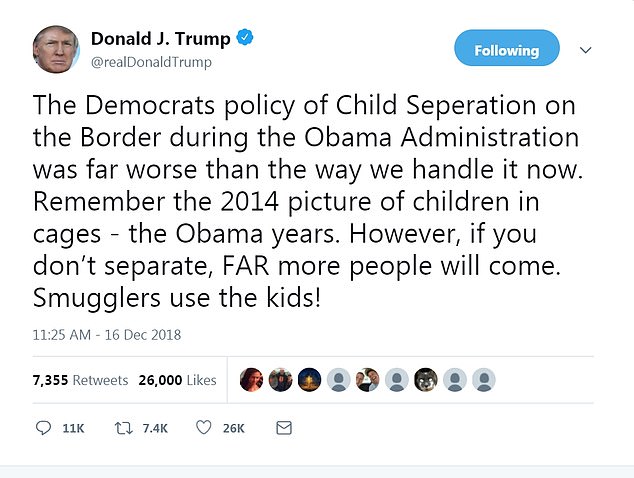 As Miller talked tough on TV, Trump took to Twitter to defend his actions on immigration policy and to advocate for tougher measures.

‘The Democrats policy of Child Seperation on the Border during the Obama Administration was far worse than the way we handle it now. Remember the 2014 picture of children in cages – the Obama years. However, if you don’t separate, FAR more people will come. Smugglers use the kids!,’ he wrote.

Trump was heavily criticized for his policy of separating migrant kids from their parents.

During that time, photos went viral of kids behind bars, but they were later revealed to be from 2014, when President Barack Obama was in office.

Trump walked back his policy after first lady Melania Trump, his daughter Ivanka Trump and members of his own party said they disagreed with it.

Sunday’s tweet seemed to suggest he was considering reinforcement.

‘President Trump should understand. There are not the votes for the wall. In the House or the Senate, he is not going to get the wall in any form,’ he said on NBC’s ‘Meet the Press.’

‘However, if you don’t separate, FAR more people will come. Smugglers use the kids!,’ he wrote.

Miller said a border wall was necessary for U.S. security.

‘This is a very fundamental issue. At stake is the question of whether or not the United States remains a sovereign country. Whether or not we can establish and enforce rules for entrance into our country. The Democrat Party has a simple choice, they can either choose to fight for America’s working class or to promote illegal immigration. You can’t do both,’ he said.

The White House and Capitol Hill are in a lock down over funding for the wall, which is estimated to cost $5 billion.

Democrats are willing to cough up $1.3 billion and want additional protections for immigrants like the Dreamers, illegals who were brought to the country by their parents as children.

Friday is the deadline to fund the government.

Without a new spending bill, about 25 percent of the $1.2 trillion federal budget – including funds for the Department of Homeland Security – will expire after Dec. 21.

Trump was said on Friday to be shopping a two-week delay in hostilities after declaring on Tuesday that he would ‘absolutely’ preside over a shutdown until Congress approves $5 billion for his border wall. 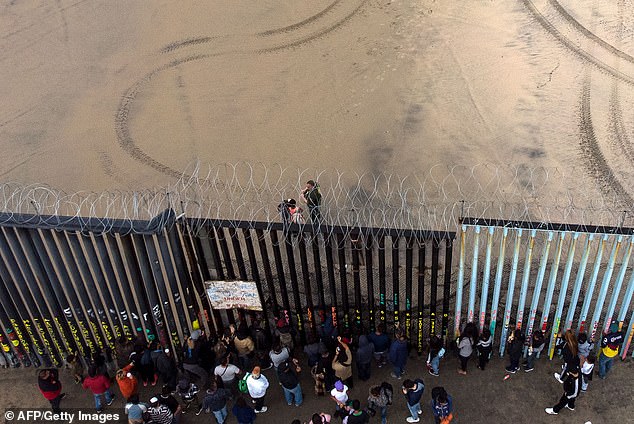 Aerial view of migrants who form part of the Central American migrant caravan, turning themselves over to a border patrol agent after crossing the US-Mexico border fence 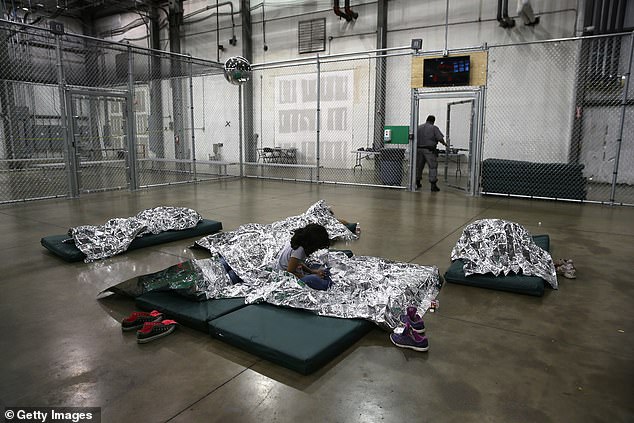 That would push the fight that could furlough federal workers over the Christmas holiday into early next year. Trump will have lost much of his leverage by then, as Democrats take the majority in the House, but as he made clear in a Thursday tweet he now sees the value of avoiding an expensive and potentially toxic government closure.

‘Let’s not do a shutdown, Democrats – do what’s right for the American people!’ Trump had tweeted.

But this could be the president’s last chance to fully fund his wall. Democrats take control of the House of Representatives on Jan. 3 and they are not likely to give Trump the money he needs to make his wall a reality.

Trump, in an extraordinary Oval Office shouting match with Democratic leaders Chuck Schumer and Nancy Pelosi last week, said he would shut down the government if he didn’t get his funding – and take responsibility for it.

‘I will shut down the government. Absolutely,’ he said.

For twenty minutes, Pelosi and Schumer sparred with Trump on camera, emphasizing their long-stated position that he cannot have his border wall funding.

Furious, the president said that he would shut down the government if they don’t give it to him.

‘You want to put that on [me], I’ll take it,’ he rebutted as Schumer told him that the last government closure was his fault, too. ‘You know what I’ll say: Yes, if we don’t get what we want, one way or the other — whether it’s through you, through a military, through anything you want to call — I will shut down the government. Absolutely.’ 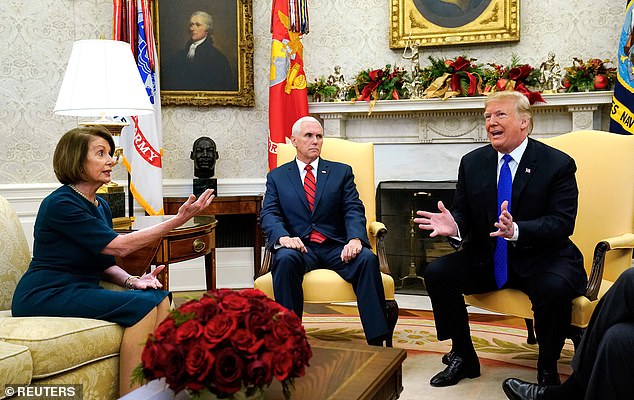 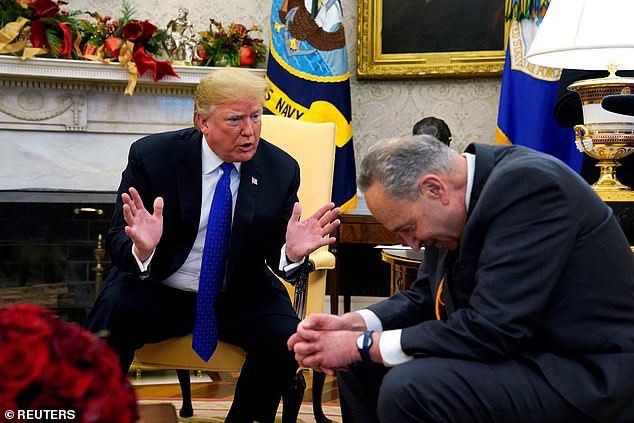 Schumer was willing to let the argument rest there, but Trump dug in, saying repeatedly that he’d shut the government down and happily take the blame.

‘I am proud to shut down the government for border security, Chuck, because the people of this country don’t want criminals and people that have lots of problems and drugs pouring into our country. So I will take the mantle,’ he said. ‘I will be the one to shut it down. I’m not going to blame you for it. The last time you shut it down, it didn’t work. I will take the mantle of shutting down.’

Belief fund recipients say their fortunes make them depressing
New evidence links three knives in the murder of Spanish golfer
French PM Macron 'set to announce fuel tax hikes will be suspended'
'Humiliated' teenager took his own life after being molested by sex-crazed female teacher
Daughter of 90 Day Fiancé Star Angela Deem is sentenced to 20 years for child molestation
GEORGE MAGNUS: Don't be fooled by China's show of military strength - it is a wounded behemoth
Car plunges from a flyover and landing near a group of unsuspecting bystanders below
Bombshell messages reveal how Donald Trump ally had ambassador to Ukraine put under surveillance