The Texas judge, criminal district attorney and prosecutor involved in the rape case of a Baylor University student who was spared jail time, all hold degrees from the Baptist school.

Local leaders argue those connections to Baylor cast doubt on the handling of the criminal case against ex-Phi Delta Theta president Jacob Walter Anderson, who was accused of repeatedly raping a woman outside a 2016 fraternity party.

Anderson was indicted on sexual assault charges, but the agreement allowed him to plead no contest to unlawful restraint. He must seek counseling and pay a $400 fine but will not have to register as a sex offender. His lawyers say a statement from the woman, which she read in court, is riddled with misrepresentations and distortions. Prosecutors have defended the plea deal. 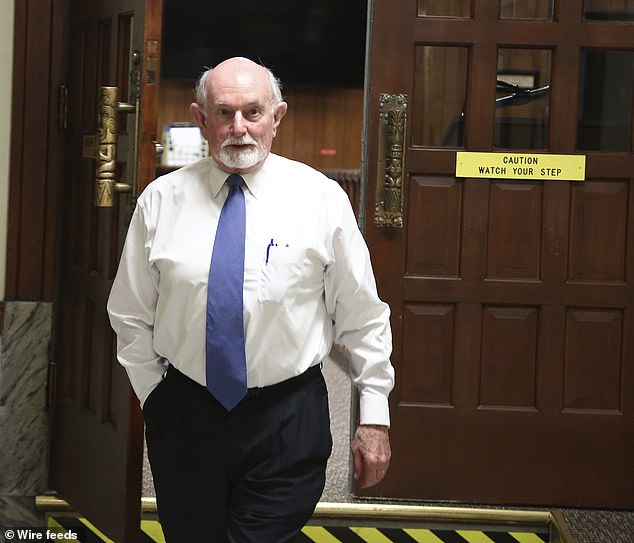 The case has some similarities to that of ex-Stanford swimmer Brock Turner, who was convicted of sexual assault and sentenced to six months in jail.

While community leaders in Waco said they do not believe or have proof of collusion in the Texas case, they said it shows a failure of the local legal system and reflects a larger culture where preferential treatment is given to people with status in the Baylor community.

‘It seems that Waco just shoots itself in the foot just time and time again,’ said Mary Duty, a lifelong resident of the Waco area and chair of the McLennan County Democratic Party.

Duty said Judge Ralph Strother, who presided in the Anderson case, holds two degrees from Baylor. He was known in the community as a nice and decent man. She said the sentencing goes ‘completely against the grain’ of his reputation and left many disappointed. 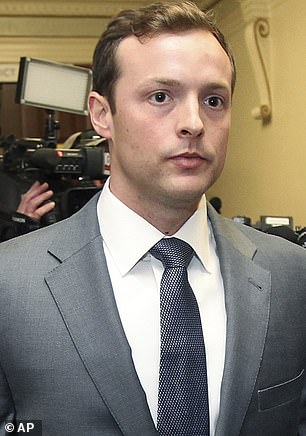 The unwelcome attention hit Baylor about two years after a sexual assault scandal surrounding the football program engulfed the school, leading to the firing of then-football coach Art Briles, resignation of Athletic Director Ian McCaw and the demotion of the university’s president, Ken Starr, who later resigned. Baylor has reached settlements with several women who say they were sexually assaulted by football players and their stories were ignored.

The local legal system also has been tarred by the handling of a 2015 shootout involving rival biker clubs and police in Waco that left nine bikers dead. McLennan County Criminal District Attorney Abel Reyna brought charges against more than a hundred bikers. He was ousted by voters in the Republican primary in March. At that time he had failed to convict anyone for the killings. He will leave office at the end of the year.

The Baylor ties run deep in Waco – a city of about 136,000 people located between Austin and Dallas bolstered by the economic impact of the university. Baylor has more than 20,000 students, faculty and staff in Texas. Nearly one of every five employed people in Waco work in education and health services, according to September figures from U.S. Bureau of Labor Statistics.

Mark Osler, a former Baylor law professor who left in 2010, said a county with prosecutors and judges from the same background can create a dangerous situation where bias could occur. It’s better, he said, to have diversity in background and employ people not tied to Baylor.

Judge Strother completed his undergraduate degree at Baylor in 1965 and received his law degree in 1982. Strother also received a master’s degree in political science from the university in 1967. 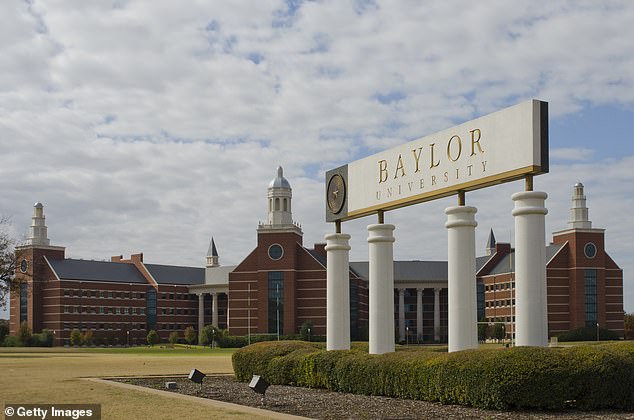 Baylor University ties run deep in Waco – a city of about 136,000 people located between Austin and Dallas bolstered by the economic impact of the university 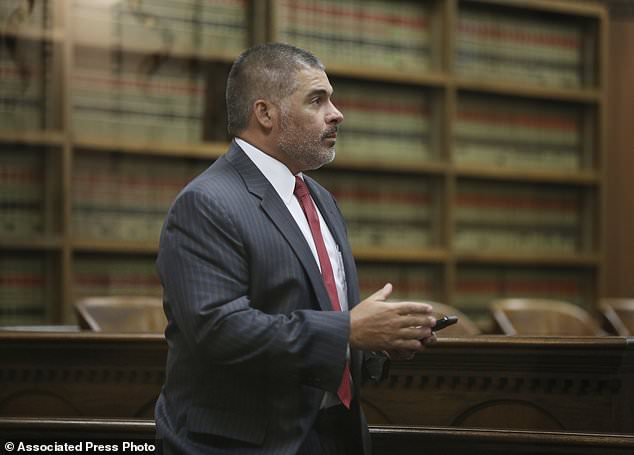 District Attorney Abelino Reyna (shown) approved the plea agreement allowing Anderson to avoid jail or being listed as a sex offender. He has two degrees from Baylor University

Criminal District Attorney Reyna holds two degrees from the university and graduated from the law school in 1997.

Prosecutor Hilary LaBorde, who agreed to the plea deal, graduated from the Baylor law school in 2002. LaBorde has faced criticism over an email in which she suggested jurors would take Anderson’s side because there was only one alleged victim. Texas prosecutors have recognized LaBorde for her expertise in sex-crime cases and she won sexual assault convictions against two football players during the school’s scandal.

LaBorde defended the plea deal in a statement, saying conflicting accounts and evidence made the original accusation difficult to prove ‘beyond a reasonable doubt.’

‘As a prosecutor, my goal is no more victims,’ she said. ‘I believe that is best accomplished when there is a consequence rather than an acquittal.’ 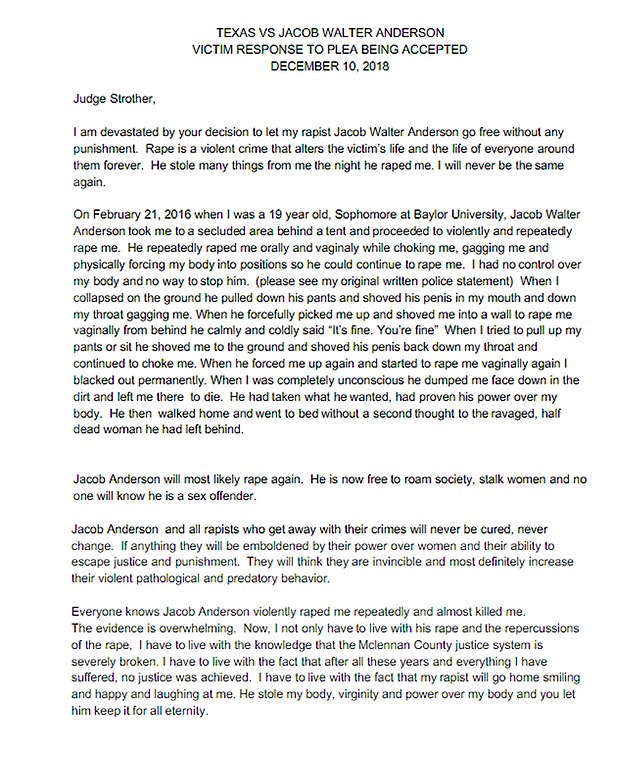 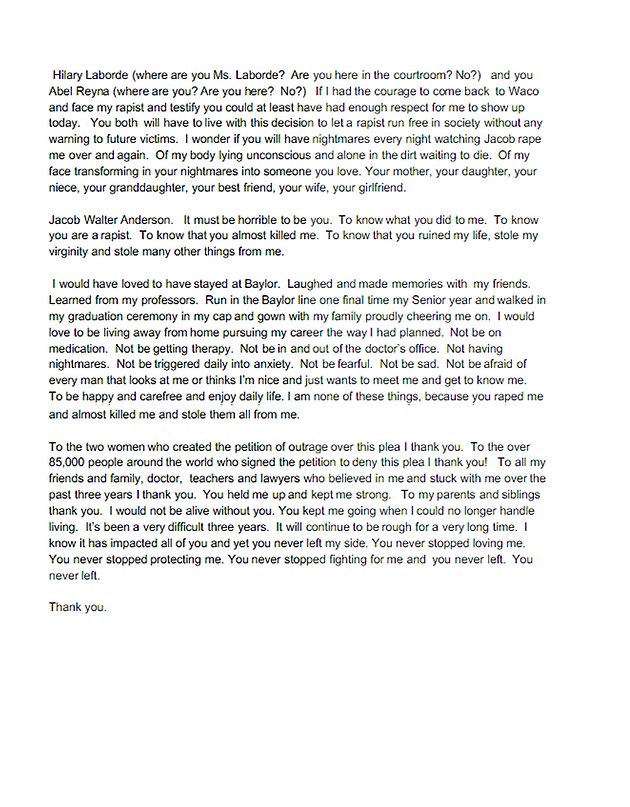 The victim, known as Donna Doe, read her impassioned impact statement in court, condemning Anderson and the county’s justice system after the very lenient sentence 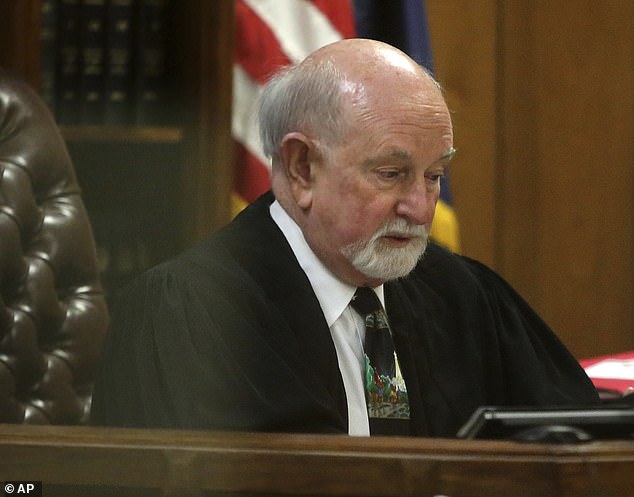 Judge Strother completed his undergraduate degree at Baylor in 1965 and received his law degree in 1982. Strother also received a master’s degree in political science from the university in 1967

Baylor student Paige Hardy, an advocate on campus for survivors of sexual abuse, said the university did the right thing in the Anderson case, expelling him after an investigation and suspending the Phi Delta Theta fraternity. But she said the outcome of the criminal case was ‘a slap in the face.’

While Baylor has moved forward and improved the reporting process for sexual assault, Baylor’s problems stem in part from a ‘toxic evangelical’ narrative, Hardy said, referring to its Baptist roots.

‘You have these donors and these administrators who often times don’t want to address the fact that students are having sex and students are drinking,’ she said.

Waco clinical psychologist Emma Wood, who used to work at the Baylor counseling center, said her clients come to her because of the sexual and spiritual trauma they’ve experienced at the university and at large churches in the area.

‘I see a lot of trauma survivors,’ said Wood, who left the university and reached a settlement with the administration over claims of discrimination and sexism. ‘In fact, that’s the majority of my case load.’

Terrifying moment two skydivers become entangled while attempting a daring trick 2km high Gold Coast
Father-of-five who died of lung cancer pens his own obituary begging others to quit smoking
Shocking moment man douses store clerk and a customer in lighter fluid and sets one of them on fire
Blast of water could shrink an enlarged prostate as effectively as surgery
Eleven people are caned in public by a hooded Sharia officer in Indonesia
Hillary Clinton mocks Donald Trump's letter to Turkey's president
Famed photographer Peter Beard, 82, goes missing from his Hamptons home
Mother announces 'tummy tuck' gift for daughter at graduation