A photo has emerged of the seven-year-old girl who died hours after she was arrested with her father at the border, though the Department of Homeland Security and Customs and Border Patrol is refusing to take responsibility for her death.

The Guatemalan government identified the girl as Jackeline Caal Maquin on Friday. A photograph of her was obtained and confirmed by . The photo shows a little girl in blue jeans and a blue top, staring at the camera while standing outside.

The child died of dehydration two days after being arrested at the border. She stopped breathing on a US government bus and was not taken to hospital for more than an hour later.

Her father is 29-year-old Nery Caal, and both were arrested as they tried to enter the US at the  Antelope Wells Port of Entry in New Mexico at 9.15pm on December 6.

They were among 163 migrants who were met by four Customs and Border Patrol Agents. At 10pm, she was checked over by an agent who did not observe that she had any health issues or visibly concerning attributes.

According to DHS and CBP officials who spoke on the condition of anonymity on Friday during a conference call with reporters, the girl’s father also told an agent in Spanish that she did not have any health problems and it was marked on a form used to process them.

The DHS official who repeatedly refused to go on the record said the girl would have ‘died alone in the desert’ had it not been for the ‘life saving measures’ that were taken by agents, despite the fact that she died 36 hours after entering their custody. 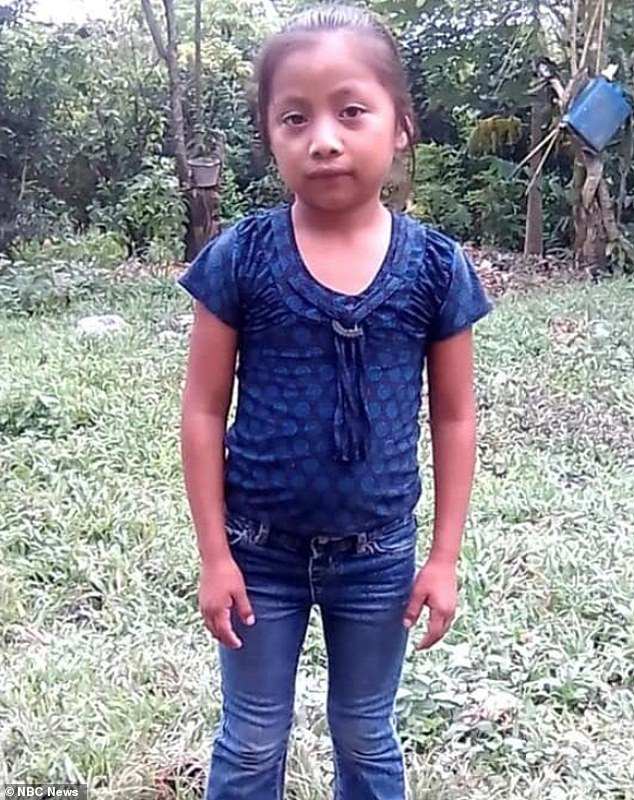 Photo of Jakelin Ameí Rosmery Caal Maquin, the 7-year-old Guatemalan girl who died in the custody of U.S. Customs and Border Protection after waiting an 90 minutes before receiving emergency medical care

Between 10pm and 4.30am, she remained at the Port of Entry, apparently with access to food, water and restrooms, until both she and her father were put on a bus to be taken for processing 95 miles away at the Lordsburg Border Patrol Station.

At 5am, the child started vomiting and her father alerted the agents on the bus but there was nothing they could do other than carry on, according to government officials, and alert medical staff to be prepared at the other end of the journey.

Ninety-minutes later, the child’s father told agents that she had stopped breathing  at the same time they arrived at the patrol station.

‘There wasn’t a whole lot for them to do. Really, in that part of the border, there is no faster means to get her to where she needs medical treatment,’ the official said on Friday. 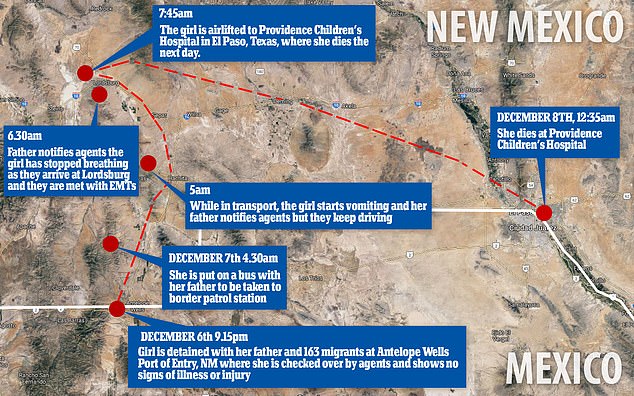 Jackeline Caal Maquin died on December 8th a day after being detained on the border with her father. Her death has sparked humanitarian concerns about the US’s treatment of illegal migrants in their custody. Above is an illustration of her final hours 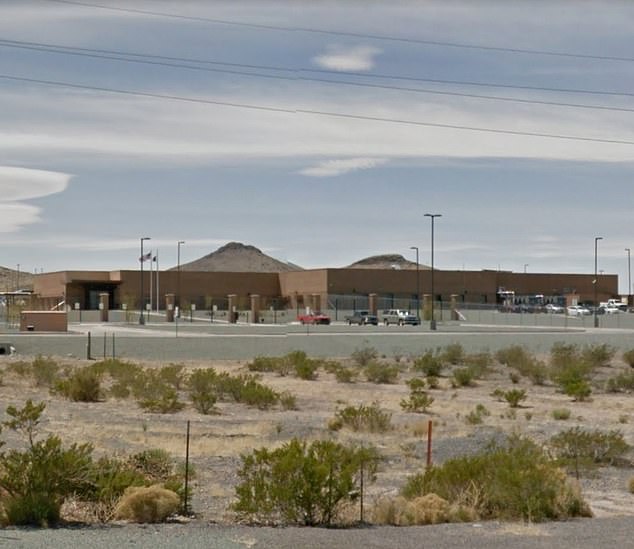 The child was airlifted from the Lordsburg Border Patrol Station in New Mexico (shown) at 7.45am on December 7 but she had stopped breathing more than an hour earlier while being transported on a bus from the Antelope Wells Port of Entry where agents say she was checked over, showed no signs of illness and had access to food and water

They say it was around the time that they arrived at the patrol station but the exact number of minutes between her stopping breathing and their arrival is unclear.

She was then airlifted to hospital in El Paso, Texas, at 7.45am – more than an hour later – and went into cardiac arrest.

After being revived, a CT scan revealed that Jackeline had brain swelling. She died the next day, early in the morning, from liver failure.

They insist that there was nothing else they could have done to save her and that she was properly checked over despite the border agents not having medical training.

‘The initial screening revealed no evidence of health issues. There is no indication that it was a lack of attention. The questions were asked… there were plenty of opportunities in that period of time for her father to alert agents.

‘He had already been asked questions about her health, he knew we were interested in it,’ the CBP official said.

December 6th, 9.15pm: Jackeline is detained at the Antelope Wells Port of Entry

10pm: She is looked over by border agents who clear her and say she has no signs of ill health

December 7th, 4.30am: Jackeline is put on a bus with her father to be taken to the Lordsburg Patrol Station

5am: The child begins vomiting on the bus

Agents call ahead to the Lordsburg station and keep driving

6.30am: Jackeline’s father tells agents she has stopped breathing

6.45am: EMTs treat Jackeline at the border patrol station

7.45am: She is airlifted to Providence Children’s Hospital in El Paso, Texas

OUTNUMBERED AGENTS AND NO MEDICAL STAFF

Asked by DailyMail.com if it was possible the girl was not thoroughly checked over due to the fact there were so few agents and so many migrants to process, the official denied that there was a lack of care.

‘Our agents are almost always outnumbered in the middle of the night on the border,’ they said.

There were no medical staff on the scene when they were first apprehended and the checks carried out boiled down to a visual observation and a list of questions, the officials said.

FATHER SAID SHE HAD NO HEALTH PROBLEMS

One thing that has been repeated by officials on and off the record is that no one raised the alarm that the girl was ill until she was being sick on the bus.

During the call on Friday, agents said that the girl’s father was interviewed and answered, like others, around 20 questions.

Because she was a minor, he answered on her behalf.

Crucially, the officials said that the interview was conducted in Spanish and that ‘all’ border patrol agents had to be ‘proficient’ in the language in order to keep their jobs.

His answers were translated and used to complete the form where it was written that the girl had no medical problems.

LONG WAIT TO GET ON BUS IN REMOTE, UNDER-RESOURCED BASE

The first group, which contained predominantly unaccompanied minors, was taken from Antelope Wells to Lordsburg at 10pm. There was only one bus that was available to agents in the area which is extremely remote.

While she was waiting for her ride, the girl and her father had access to food, water and restrooms, according to the officials.

‘The resources that we have to use, we have to use as efficiently and effectively as we can. These are difficult and remote areas,’ the official said.

‘Antelope Wells is a forward operating base, it is different to a station.

‘These are locations we put in very remote regions. No one lives out there and the roads are very limited.’

The agency previously said she ‘had not eaten or drank any water’ for days but they did not indicate how they knew that.

By the time she arrived at the border patrol station, after the journey, her temperature was 105.7 degrees.

When she was flown to hospital, her father was driven to be with her. He was present for her death but has since been returned to custody. 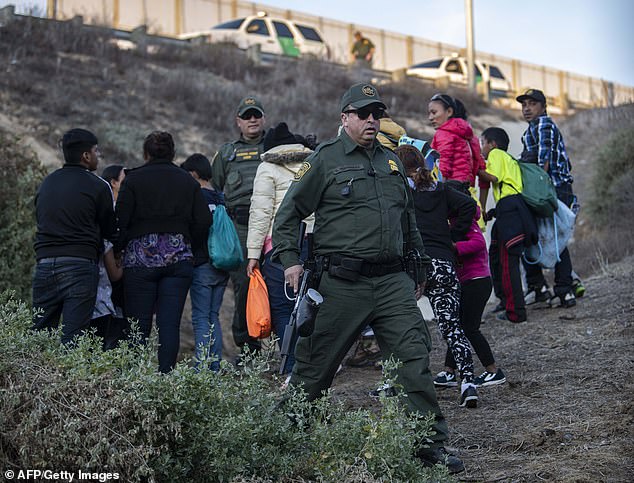 A group of migrants are arrested at the border in Tijuana on December 2 by US Border Patrol Agents. The child who died has not been named

In a statement on Friday, U.S. Customs and Border Protection Commissioner Kevin K. McAleenan said his agents did ‘everything in their power’ to save her once they knew she was ill.

‘Despite our trained EMT agents’ best efforts fighting for Jakelin’s life, and the work of the Hidalgo County and Providence Children’s Hospital medical teams treating her, we were unable to rescue her.

‘The agents involved are deeply affected and empathize with the father over the loss of his daughter.’

The Department said it would review its procedures for releasing information such as this one in light of the delay in announcing the child’s death.

REPUBLICANS SAY IT WAS THE FAMILY’S FAULT FOR TRYING

Homeland Security Secretary Kirstjen Nielsen reiterated the government’s previous statements on the matter during an interview on Friday, saying it was ‘an example of the dangers of this journey.

‘It’s heart-wrenching, is what it is. And my heart goes out to the family. All of DHS. You know this is just a very sad example of the dangers of this journey.

‘This family chose to cross illegally. What happened here was that they were about 90 miles away from where we could process them.

‘They came in such a large crowd it took our Border Patrol folks a couple times to get them all.’ She insisted that she and the other migrants were given ‘immediate care’ but did not go into further detail.

‘We’ll continue to look into the situation, but again, I cannot stress enough how dangerous this journey when migrants choose to come here illegally,’ she said.

‘It’s a horrific, tragic situation. Obviously, our hearts go out to the family and to anyone who’s suffered any type of danger and peril that they see so often when they make that trek up from the southern border. It’s a horrific situation.

‘There’s no two ways about it and it’s — it’s a sad time, but it’s also senseless. It’s a needless death and it’s 100 percent preventable.

‘If we could just come together and pass some common sense laws to disincentivize people from coming up from the border and encourage them to do it the right way, the legal way, then those types of deaths, those types of assaults, those types of rapes, the child smuggling, the human trafficking that would all come to an end.

‘And we hope Democrats join the president.’

All CBP would say on Friday when contacted by DailyMail.com earlier in the day was that its agents ‘were unable to stop this tragedy.’

‘As we have always said, traveling north illegally is extremely dangerous. Drug cartels, human smugglers and the elements pose deadly risks to anyone who comes across the border illegally.

‘Border Patrol always takes care of individuals in their custody and does everything in their power to keep them safe. Every year the Border Patrol saves hundreds of people who are overcome by the elements between our ports of entry.

‘Unfortunately, despite our best efforts and the best efforts of the medical team treating the child, we were unable to stop this tragedy from occurring.

‘Once again, we are begging parents to not put themselves or their children at risk attempting to enter illegally. Please present yourselves at a port of entry and seek to enter legally and safely,’ a spokesman said.

The case has outraged civil rights groups including the ACLU and sparked further concerns over the humanitarian component of the ongoing border crisis.

Senator Dianne Feinstein said in a statement was among the first to abhor the incident and demand answers.

‘It’s heartbreaking and unacceptable that a 7-year-old girl died of dehydration and shock last week in Customs and Border Protection custody.

‘It’s illegal and simply barbaric to deny water to a young girl in custody, particularly after they turned themselves in to authorities.

‘Families walking hundreds of miles across the desert for a chance of refuge in the United States are desperate. This country owes them compassionate, humane treatment.

‘We will be demanding answers from Commissioner Kevin McAleenan as to how this was allowed to happen,’ she said.

‘This tragedy represents the worst possible outcome when people, including children, are held in inhumane conditions.

‘Lack of accountability, and a culture of cruelty within CBP have exacerbated policies that lead to migrant deaths,’ Pompa said.