The largest diamond ever to be discovered in North America has been found in .

It was unearthed in October at the Diavik Diamond Mine, which is located approximately 135 miles south of the Arctic Circle in Canada’s Northwest Territories.

The previous record-holder was also mined at Diavik and was dubbed the ‘Diavik Foxfire’ when it was discovered in 2015. 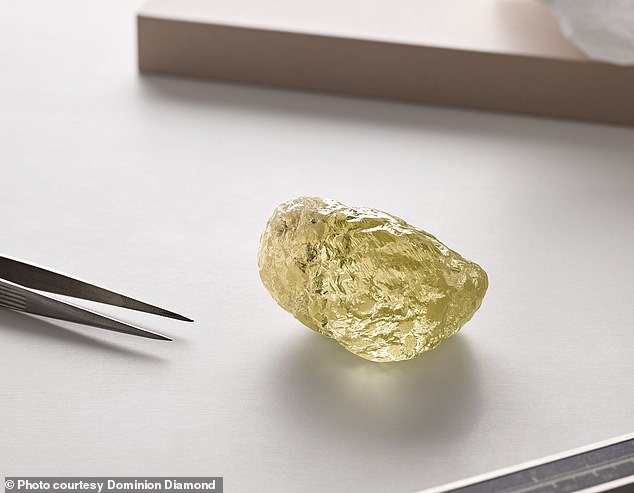 The largest diamond ever to be discovered in North America was unearthed in in October in Canada at the Diavik Diamond Mine. The yellow diamond (pictured) weighs 552 carats and measures 33.74mm x 54.56mm

Diavik is 60 percent owned by Rio Tinto, a multinational mining firm based in London, along with Dominion Diamond Mines ULC, which owns a 40 percent stake in the property.

‘The color and texture of the diamond are a unique example of the journey that natural diamonds take from their formation until we unearth them,’ Kyle Washington, Chairman of Dominion Diamond Mines, said.

‘Our Diavik Mine has produced some of the most beautiful diamonds in the world, and this one certainly tops the list.’

Its size in its raw state as it was discovered has been compared to that of a chicken egg.

‘A diamond of this size is completely unexpected for this part of the world and marks a true milestone for diamond mining in North America,’ the company said in a statement.

‘Abrasion markings on the stone’s surface attest to the difficult journey it underwent during recovery, and the fact that it remains intact is remarkable.’

The final gemstone (or gemstones) will bear the Canadamark trademark, which is owned by Dominion, and signifies stones are responsibly mined, natural and untreated.

The value of the massive gemstone isn’t yet know, as its still undergoing evaluation, Dominion said. 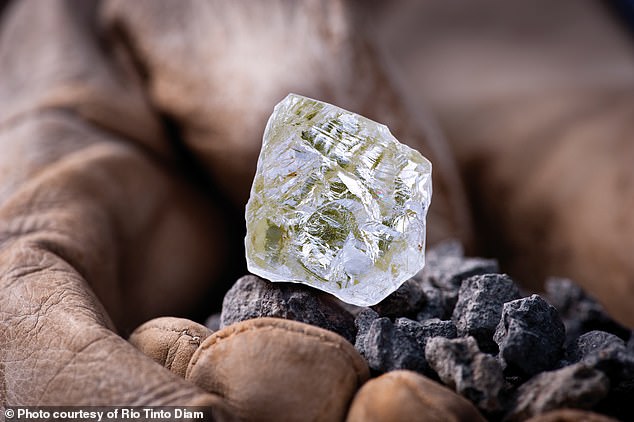 For context, the Diavik Foxfire diamond weighed 187.7 carats when it was unearthed in 2015, and produced two main finished diamonds.

Both of the final gemstones were brilliant-cut and pear shaped, weighing 37.87 and 36.80 carats.

The two stones were auctioned together at Christie’s for a total of $1.3 million.

Diamonds have been being mined at Diavik since 2003.

The site produces between six and seven million carats of predominantly large, white gem-quality diamonds each year, according to . 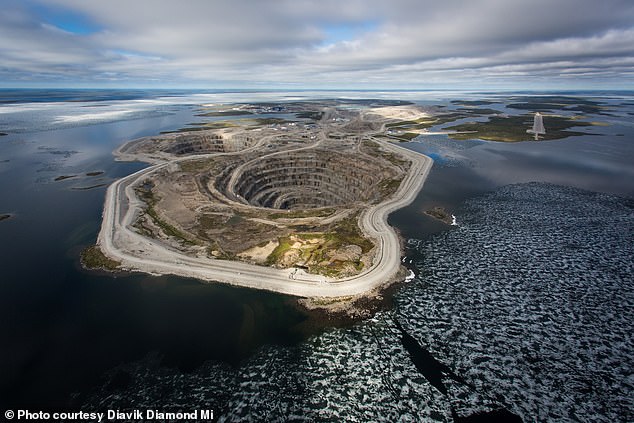 Ex-Tour de France winner Ullrich says girlfriend is ok with his infidelity because he 'needs sex'
Meghan and Harry's Windsor cottage refit cost hidden from taxpayers
Trump complains about MSNBC coverage of his state visit to UK
Police K9 officer dies after being left in hot patrol car
Harry Dunn's twin speaks out about his brother who was killed by the fugitive wife of US spy
Ten people are killed at Orthodox Christian festival when seating collapses
Michael J. Fox stumps for Pete Buttigieg in Las Vegas on caucus eve
Does banning travellers REALLY curb coronavirus?