A lucky little girl was plucked out of the crowd to become a princess for the day – and present a bouquet to the Queen.

Evie Hayden, four, from Kent, waited for an hour today to present her posy to the monarch on her last public engagement before Christmas, despite temperatures hovering just above freezing.

And she was rewarded by being plucked out of the crowd to meet the sovereign personally.

The Queen was seen smiling as she accepted the flowers after arriving at the Honourable Society of Lincoln’s Inn in  on Thursday.

The royal, 92, put on a vibrant display in a coordinated fuchsia ensemble, smiling as she greeted members of the society of barristers.

Prince Andrew, 58, was seen arriving alongside his mother as they made their way along the red carpet to the large estate of historic buildings in central London, which houses the society. 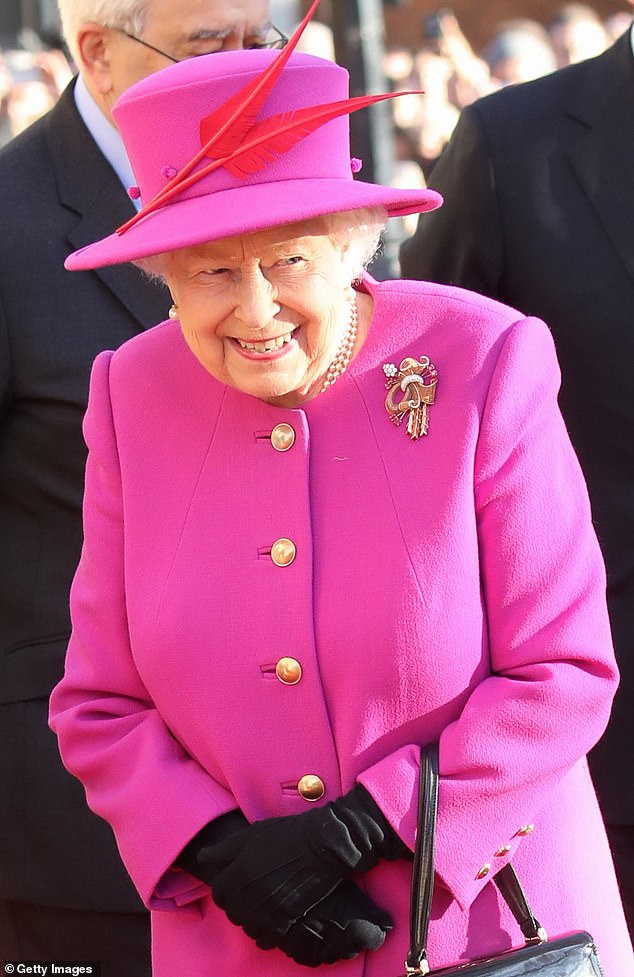 The Queen looked in good spirits as she arrived at the Honourable Society of Lincoln’s Inn in London on Thursday, wearing a coordinating fuchsia pink hat, coat and dress ensemble 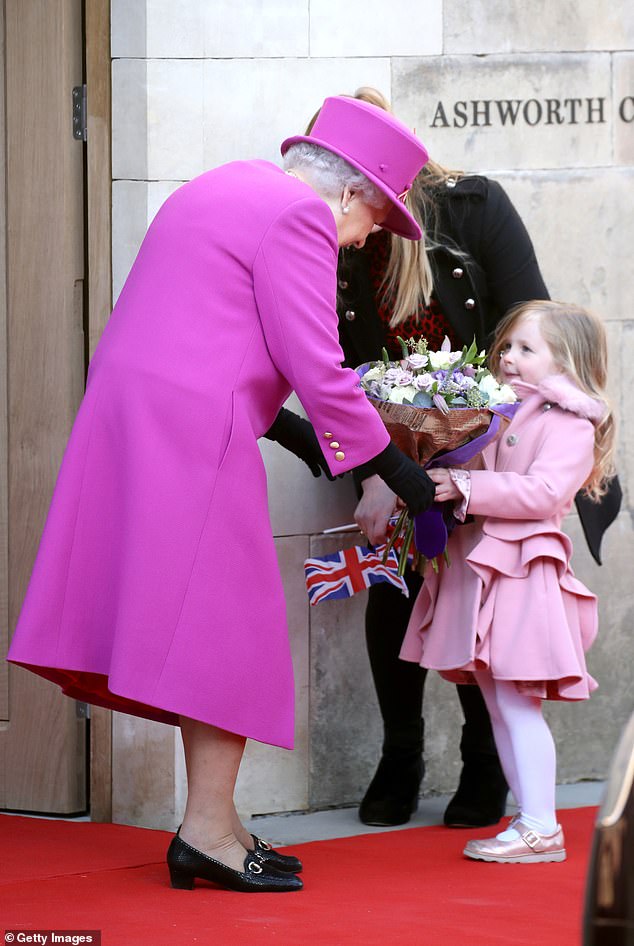 Little Evie, who was accompanied by her mother, Michelle, 34, had missed nursery to travel up to London and executed her task beautifully.

But she said afterwards that all she could think about was how ‘freezing’ she was in her pretty pink coat and dress.

‘I was sooooo cold,’ she said, her teeth chattering.

‘We almost didn’t make it as there were missed trains and a bit of a fall- there’s mud on her tights – but what an incredible experience,’ Michelle, whose husband Steven works nearby, said.

The Queen, accompanied by her son, the Duke of York, was visiting The Honourable Society of Lincoln’s Inn in London to officially open its new £20 million Ashworth Centre, built underneath the historic institution.

The Inn, which holds the earliest records of any of the four Inns of Court dating from 1422, houses a number of barristers’ chambers and solicitors’ offices, mainly specialising in chancery. 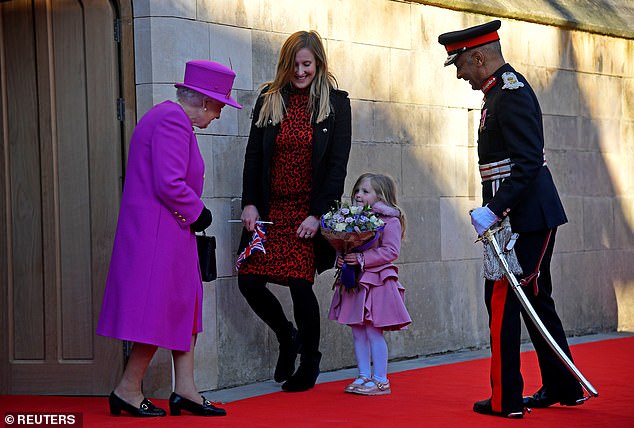 Evie Hayden, four, from Kent, waited for an hour today to present her posy to the monarch on her last public engagement before Christmas, despite temperatures hovering just above freezing 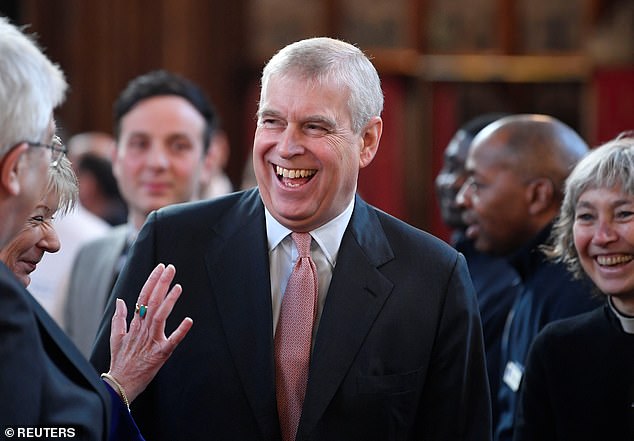 Prince Andrew put on a dapper display in a dark suit, crisp white shirt and salmon-coloured tie as he joined the Queen on her engagement 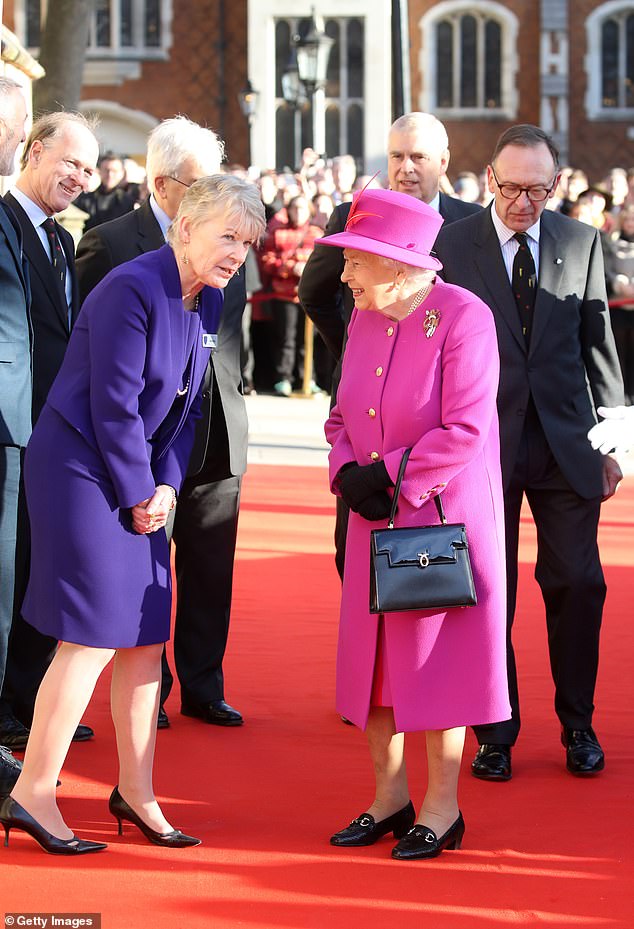 Prince Andrew, 58, was seen arriving alongside his mother as they made their way along the red carpet to the large estate of historic buildings in central London, which houses the society (seen behind the Queen)

The Queen, who last visited in 1951, arrived with her son who holds the honorary position of a ‘Royal Bencher’ at the Inn.

She was wearing a Stewart Parvin magenta coat and magenta fuchsia dress it’s a hat by Rachel Trevor Morgan. Her brooch was a ruby gold diamond spray.

The Queen was seen with her trademark handbag, a patent design by Launer, and has a range of bags by the brand.

The structured bags cost between £1,200 and £2,100, and the Queen is estimated to own around 200 Launer pieces in an understated black leather or patent.

Known for its iconic ‘twisted rope’ emblem, Launer (launer.com) was established in 1941 and awarded a Royal Warrant after supplying with Queen with leather good since 1968.

A top seller in Selfridges and Fortnum & Mason and a favourite among society ladies, the company recorded a sale increase of over 400 per cent in the past four years on its website. 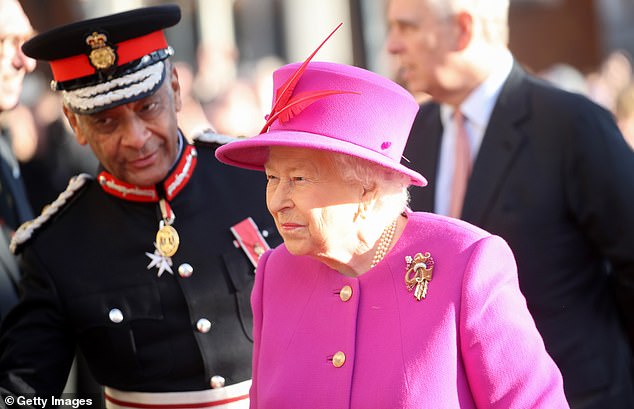 Working her signature style, the Queen looked stylish in a deep pink coat embellished with gold buttons and adorned with a brooch 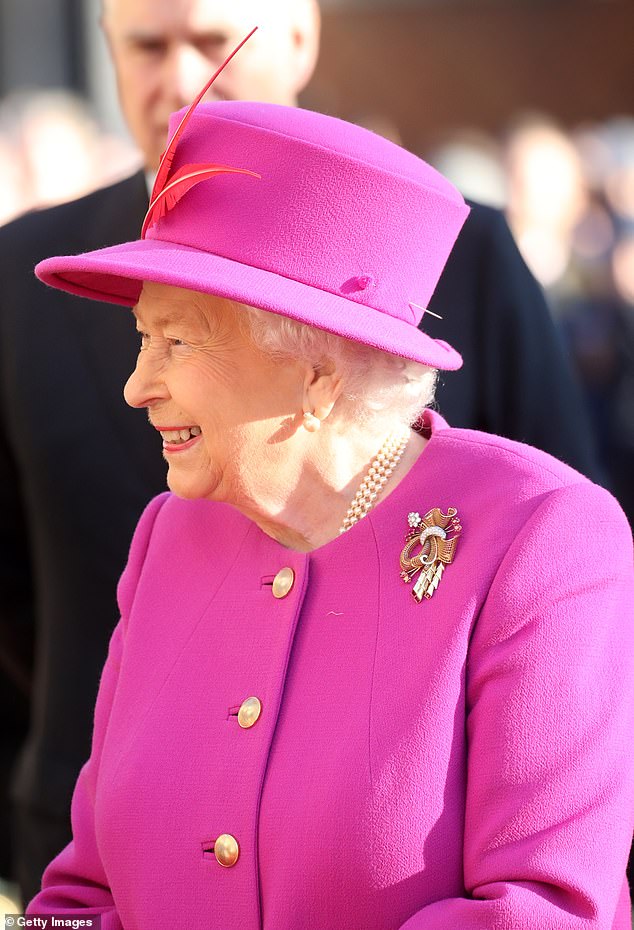 Coordinating the look, the royal teamed the look with a matching hat adorned with red feathers, and a dress that reached just below the knees

The Queen viewed the stunning new underground teaching facility for students and newly qualified barristers attached to the Inn.

‘It’s amazing,’ she told the Treasurer, The Right Honourable Lord Justice Patten, who was guiding her around.

After meeting people involved in the building’s construction, as well as students, scholars and staff from the Education department, the Queen unveiled an inscription to mark the official opening of the new facility.

The Royal Party then moved to the historic Great Hall to dedicate it after an extensive refurbishment.

On her way the Queen viewed a painting of Queen Victoria opening the Great Hall (or New Hall) as it was then known ) in 1845, as well as a modern portrait of her sister, Princess Margaret, herself a former Royal Bencher, painted by Bryan Organ in 1970, which she looked slightly bemused at. 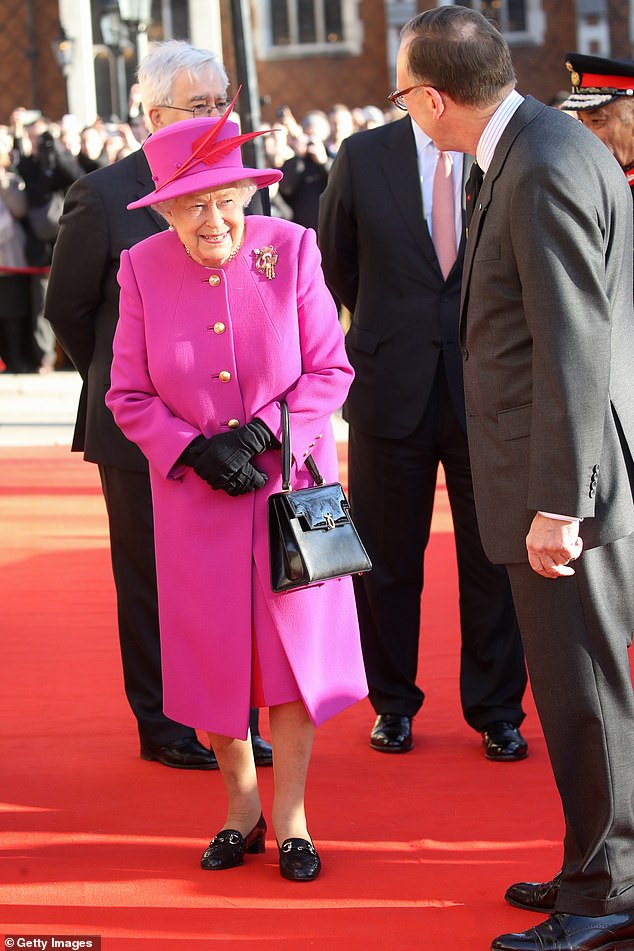 The ensemble was completed with a pearl necklace and earrings, and acccessorised with globes and her favourite Lautner handbag 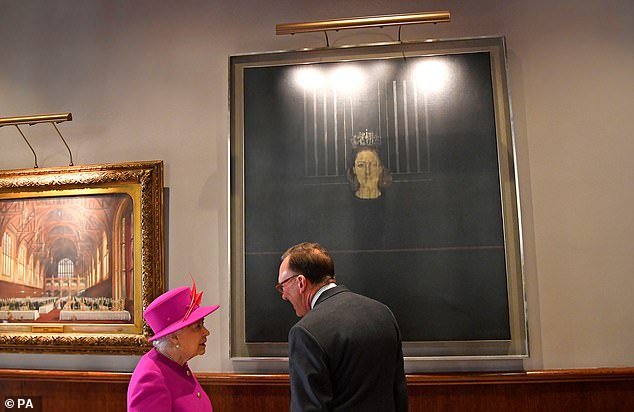 Queen Elizabeth II, looks at a portrait of Princess Margaret, during her visit to The Honourable Society of Lincoln’s Inn in London to officially open its new teaching facility 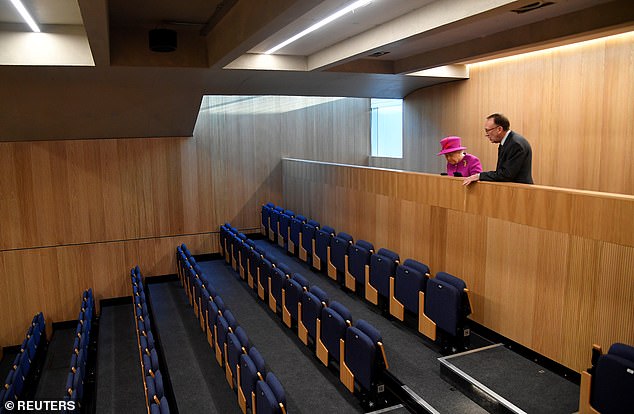 The Queen looked around the grounds and was present to open its new teaching facility, the Ashworth Centre and relaunch its recently renovated Great Hall

In the Great Hall, the Queen and her son met members of the Inn and its staff before she unveiled her second plaque of the day, smiling as she noted that her great-great grandmother’s name was printed alongside hers on it.

She also signed ‘The Golden Book, whose first royal signatures were King Charles II and the future King James II when they visited in 1672, as well as Queen Victoria and Prince Albert.

Built in 1845, the Great Hall is the physical and symbolic centrepiece of the Inn.

Prince Andrew first visited in 2012 when introduced as a Royal Bencher.

Meanwhile Prince Andrew put on a dapper display in a navy suit, crisp white shirt and salmon-coloured tie as he joined the Queen on her engagement. 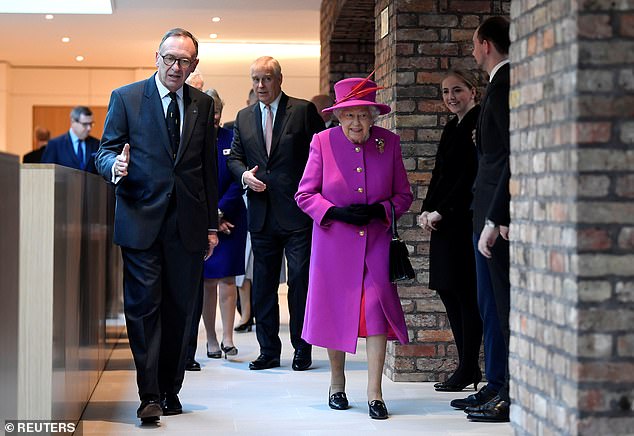 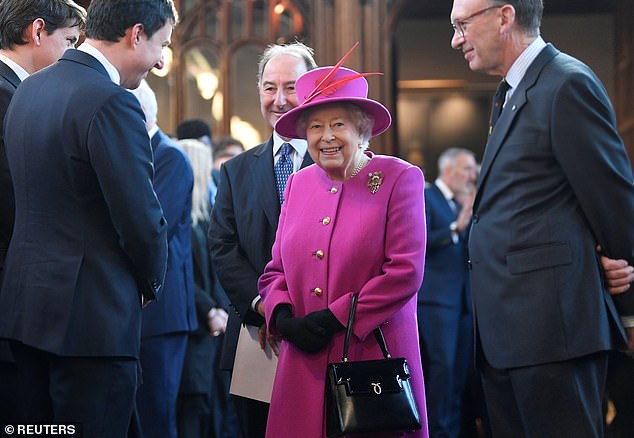 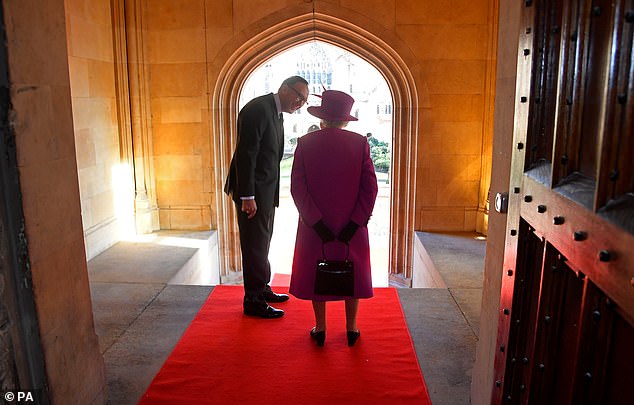 Queen Elizabeth II, visits The Honourable Society of Lincoln’s Inn in London and takes a look around the buildings

This year has been a happy one for the Queen and Prince Philip, who became great grand-parents for the sixth and seventh time following the births of Prince William and Kate Middleton’s third child Prince Louis in April, and Zara Tindall’s second child Lena in June.

They also witnessed the weddings of two of their grandchildren at Windsor Castle, with Prince Harry marrying Meghan Markle in May, and Princess Eugenie marrying Jack Brooksbank in October.

The weddings were followed by the announcement that Meghan was pregnant, with the baby due in Spring 2019. 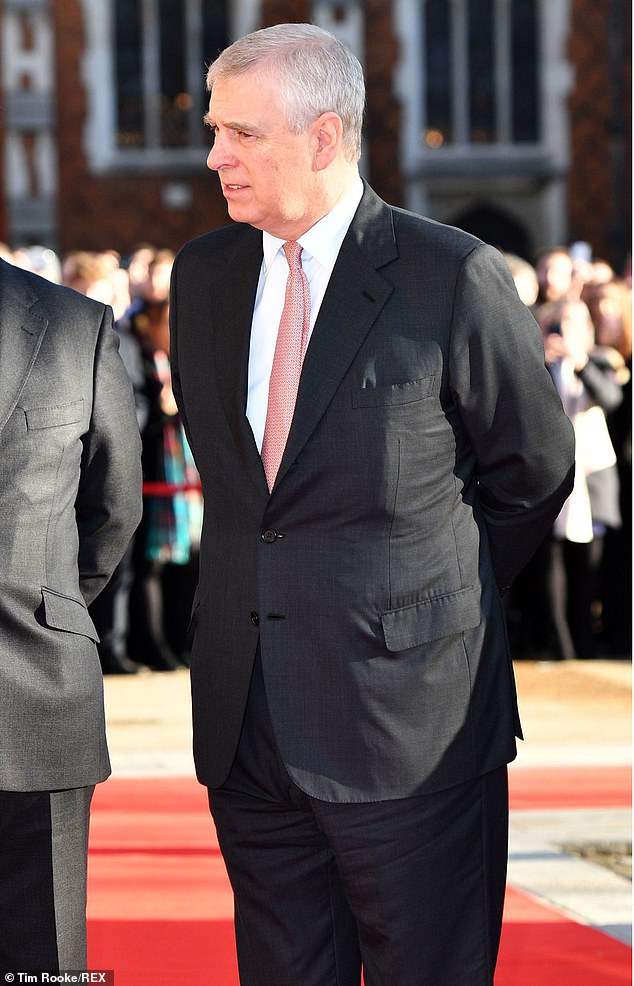 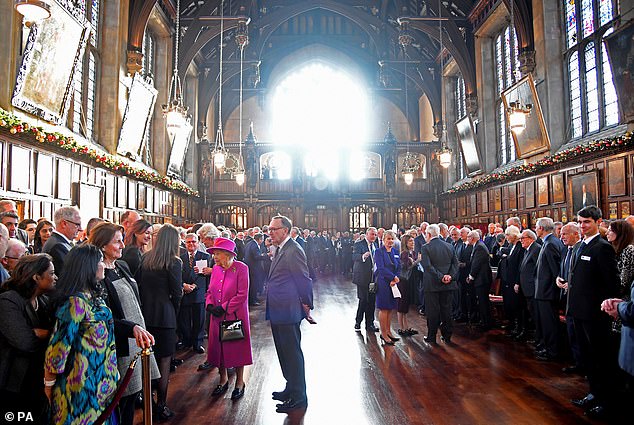