A former Baylor University President who was accused of repeatedly raping a student has been banned from the school campus.

Earlier this week Jacob Anderson agreed to a controversial plea deal following allegations that he raped a fellow student while president of a Baylor University fraternity in Waco, Texas 2016.

He was was indicted on sexual assault charges and pleaded no contest to a lesser charge of unlawful restraint. 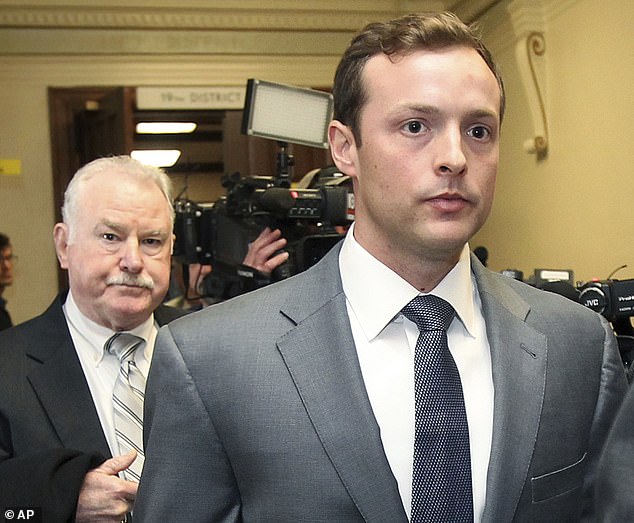 A no contest plea means a defendant does not admit guilt, but will offer no defense.

He will not be forced to register as a sex offender, with the plea deal sparking outrage from the woman and her family.

The University of Dallas, Texas, has now barred him from participating in commencement activities next week and has kicked him out of graduate school.

An online petition had been created to oppose the plea bargain, which the woman said more than 85,000 people have signed.

In response to the public outcry over Anderson’s case, UT-Dallas President Richard C Benson issued a statement Wednesday, saying that nothing is more important to the school than the safety of students.

‘Two years ago we admitted a student without knowing their legal history’  Benson said in the statement.

‘Based on recent court action and other information over the last several days, that student will not participate in UTD commencement activities, will not attend UT Dallas graduate school and will not be present on campus as a student or a guest.

‘I am grateful to the UT Dallas students, faculty and other community members who have shared their concerns, disappointment and outrage over this student’s presence on our campus’. 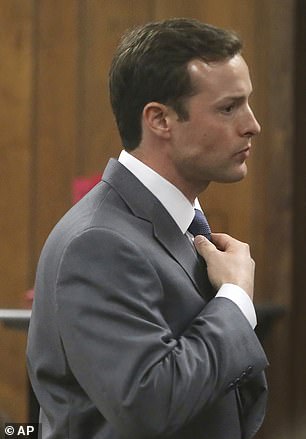 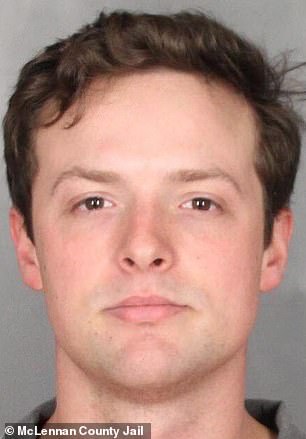 Anderson (pictured in court Monday, left), was given three years of deferred probation, ordered to seek counseling and pay a $400 fine

Tim Moore, Anderson’s attorney said Wednesday that Anderson had already started taking graduate classes at UT-Dallas and is upset at the most recent developments.

Anderson is set to graduate with a finance degree and works for a Dallas real estate development company.

Moore told the : ‘He is not real happy about being banned from the school.

‘He is going to graduate, but not be in the ceremony. This all just came out of left field.

‘He is very disappointed. He was happy at the school and doing well and looking forward to getting his graduate degree. Now that is put on hold. It is an absolutely overblown frenzy. 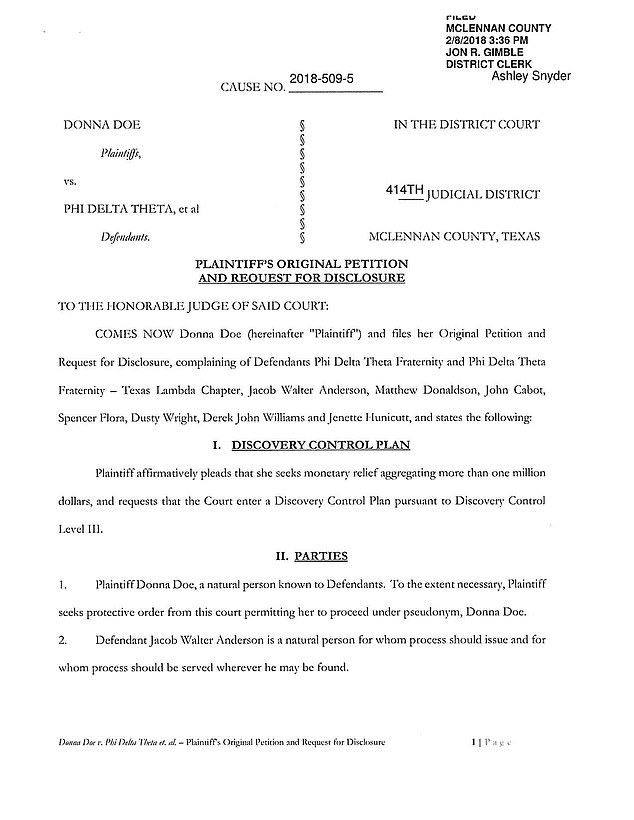 The unnamed former Baylor student who accused Anderson of violently and repeatedly raping her at a party in 2015 said she was ‘devastated’ by the judge’s decision and described the county’s justice system as ‘severely broken.’

She said Anderson raped her behind a tent in the back yard of the fraternity house, forced her to give him oral sex.

He also choked her and left her in the dirt after she blacked out. The woman went to the hospital that night and reported she had been sexually assaulted.

Fort Worth attorney Mark Daniel, who also represents Anderson, said that the woman’s victim-impact statement was ‘riddled with distortions and misrepresentations’.

He told the : ‘What seems to have been left out of her representation was some passionate kissing, groping and grinding by this girl and Mr. Anderson that occurred in front of more than 100 people at this party. 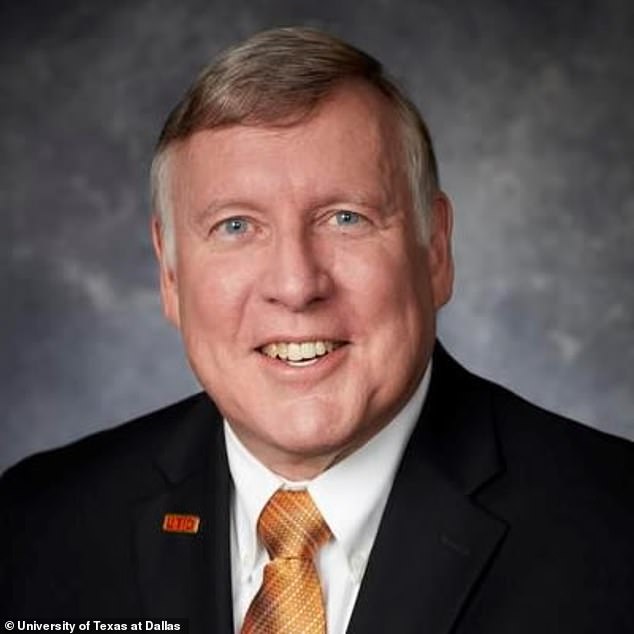 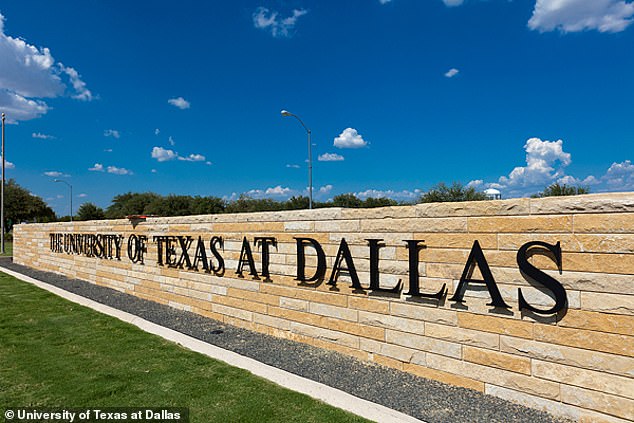 ‘Many witnesses saw them kissing passionately several times during the party.

‘The woman’s claims that she was choked is ‘absolutely contrary’ to the physical evidence and her statements to police and medical personnel that night, he said.

They also disputed her claim that she was drugged, saying no drugs were found in her system.

Following the announcement of Anderson’s plea deal on Monday, a Change.org petition calling for his being kicked out of UT-Dallas quickly garnered a lot of support.

By Wednesday morning, more than 20,000 people had signed the petition, leading to an acknowledgement from the school.

In a civil suit, the victim is also suing Anderson, five of his fraternity brothers, the national Phi Delta Theta Fraternity, Baylor’s chapter of Phi Delta Theta and a woman who owned the home where she claimed the rape took place. 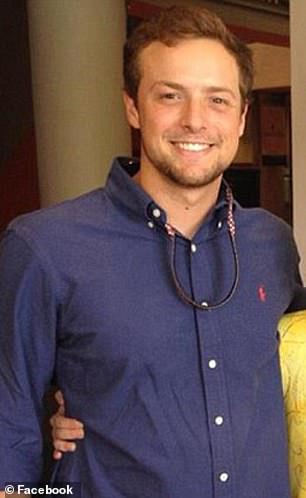 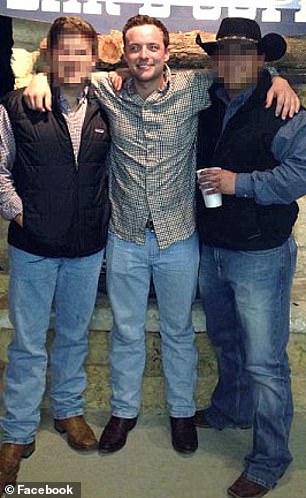 His victim said Anderson (left and right) repeatedly orally and vaginally raped her, gagged her with his penis and left her for dead in the dirt at a party in 2015

The lawsuit, obtained by , said that the fraternity failed to have adequate policies and procedures in place to monitor their guests’ alcohol consumption.

Phi Delta is also accused of ‘knowingly and intentionally serving alcohol to minors’ at the party. The suit also said it failed to properly, and in a timely fashion, report claims of sexual assault.

Phi Delta National owns, controls and maintains an all-male social fraternity, organized into chapters at various institutions of higher learning throughout the United States of America.

The lawsuit seeking damages of more than $1 million states that the defendant was negligent by providing alcohol to the plaintiff by proving her alcohol and permitting her to be drugged.

It also states that the defendants failed to adequately monitor guests to ensure they were not drugged and allowed the assailant to engage in ‘improper sexual harassment, and to ‘not only be within the leadership of Phi Delta but also to prey on the plaintiff’.

Denmark's burqa ban comes into power as activists protest controversial new legislation
Rain continues to pound Hawaii because the once-powerful Hurricane Lane is downgraded to a tropical ...
Brawl breaks out at University of Notre Dame that ends with usher being knocked to the ground
Twitter mocks Jeff Bezos for text messages to Lauren Sanchez
Jackass' Wee Man is living in a van after swapping farm and $2.37million beach home for simple life
Driver forced to dive out of the way of his own SUV after it starts rolling into the sea
Passenger plane with 152 people on board makes emergency landing
John Legend backs 'brilliant' Elizabeth Warren and goes after Mike Bloomberg