The woman behind ‘s wardrobe has lifted the list on her styling secrets – from picking the perfect jeans to her strict ban on skinny trousers.

-based stylist Angie Smith, who curates the presenter’s outfits for This Morning and I’m A Celebrity, is widely credited with sparking the ‘Holly effect’ which sees her outfits sell out within minutes of her wearing them.

Speaking to , Smith also revealed the process that goes into making Holly look flawless for every on-screen appearance – comprising two days of shopping per month, which results in 16 outfits plus ‘extras’.

Smith, who also works with Spice Girls Emma Bunton and Geri Horner, says her aim is to help clients look ‘comfortable’ and ‘relaxed’. 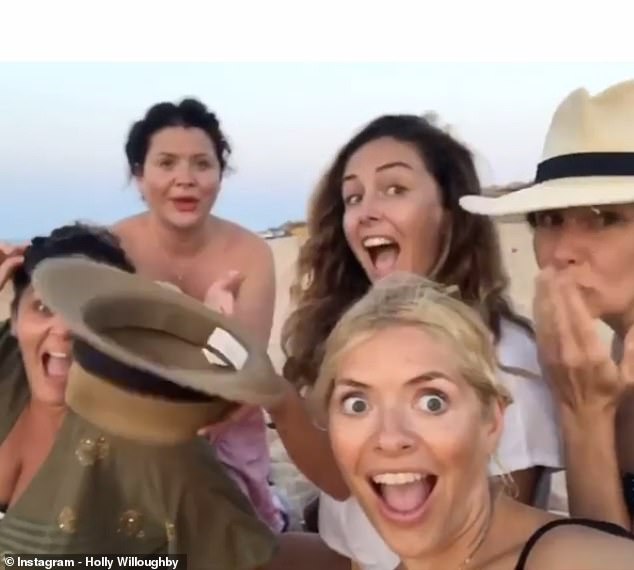 London-based stylist Angie Smith (second right) with Holly Willoughby and her glam squad in Australia. The fashion guru has shared her tricks of the trade in an interview with The Times 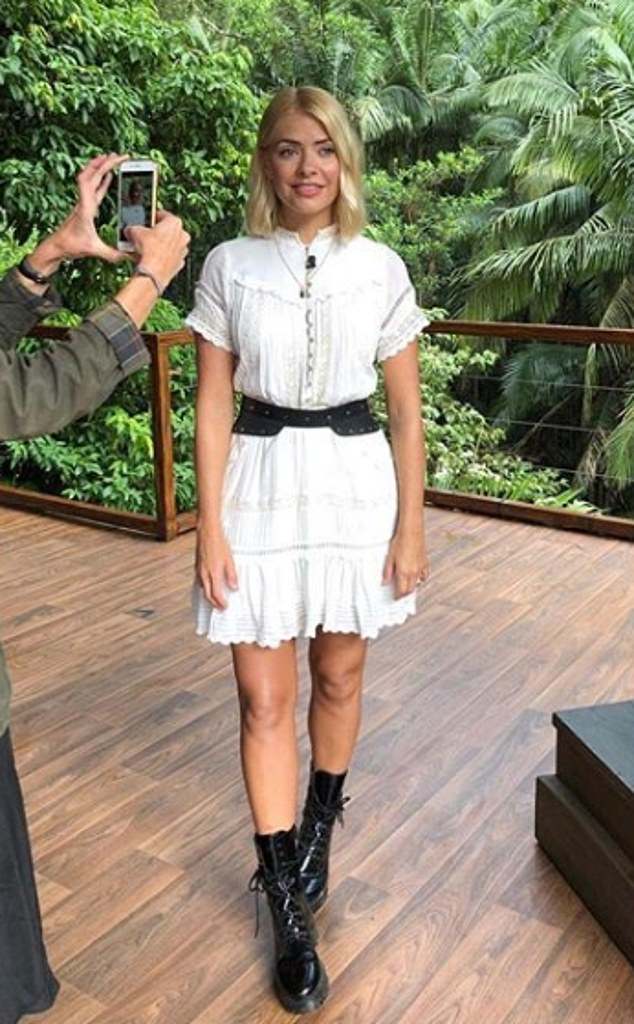 Jungle Jane: Holly in one of her I’m A Celebrity outfits – a white dress from Aussie designer Spell, Maje boots and an Isable Marant belt – which has sparked a sales boom

‘You look at someone’s figure and say, “Right,I love this about you, and this is what I want to draw attention to,” she explained.

‘And then it’s about playing up the good bits and forgetting about anything else.’

When it comes to shopping, Smith has one piece of advice for deciding whether or not a garment suits you: ‘Take a picture of yourself in an outfit, then chop your head off. Then you can look at the outfit more objectively.’

It is a tip she follows herself, and her 77,000 followers are rarely treated to pictures of the stylist’s face.

And as for fashion dos and don’ts, Smith says she has one strict rule: skinny jeans are strictly banned.

‘Who actually looked good in skinny jeans?’ she said in The Times this week. ‘They’re awful. They are leggings essentially, and we all agreed leggings weren’t OK ages ago.’

An investigation by the Daily Mail this week found that Holly’s jungle wardrobe cost a total of £19,000. 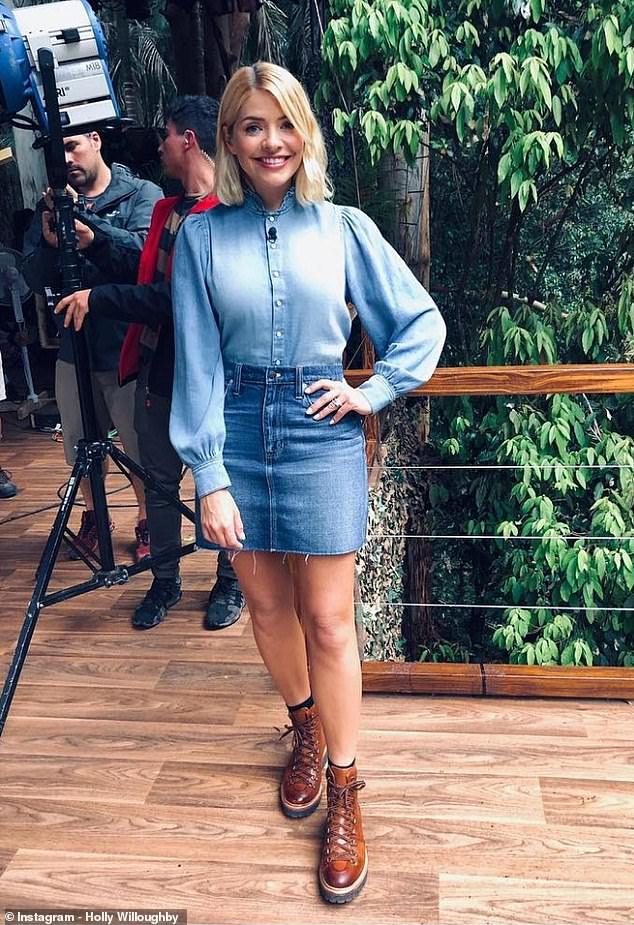 On the fourth show of I’m A Celebrity in November, Holly teamed a pale blue shirt with a denim skirt, paired with brown hiking boots by Grenson (pictured on set in Australia) 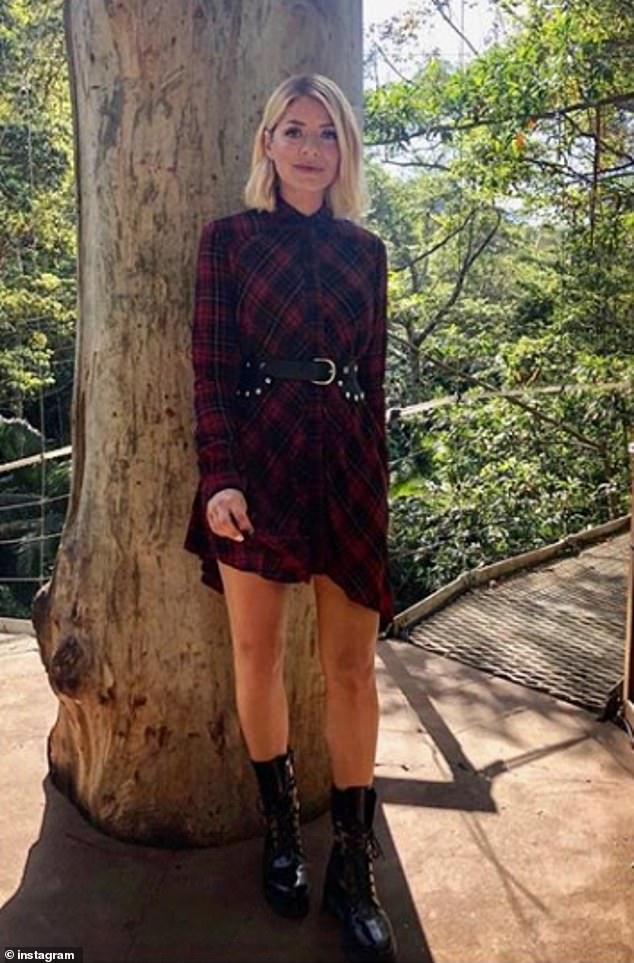 Holly wore a stylish checked shirt by Isabel Marant with a pair of leather boots by Maje for the third episode of I’m A Celeb, which has seen her stylist Angie Smith shoot to fame

We just can’t get enough of Holly Willoughby’s jungle style.

A fan of pastel hues and feminine pieces, the TV presenter mixed things up when she stepped out in this edgy getup.

Perhaps the only woman brave enough to trek around the jungle decked out in designer pieces, Holly matched an AllSaints shirt dress with Maje biker boots and an Isabel Marant belt.

The standout piece is – of course – that cool dress. With an asymmetric hem and in an oversized fit, it channels a boyish style, spotted all over the runways this season.

Unfortunately, the dress has now sold out online (probably the Holly effect) but you can shop some great lookalikes from the edit below. With prices starting at £17.99, this is a look that doesn’t have to break the bank! 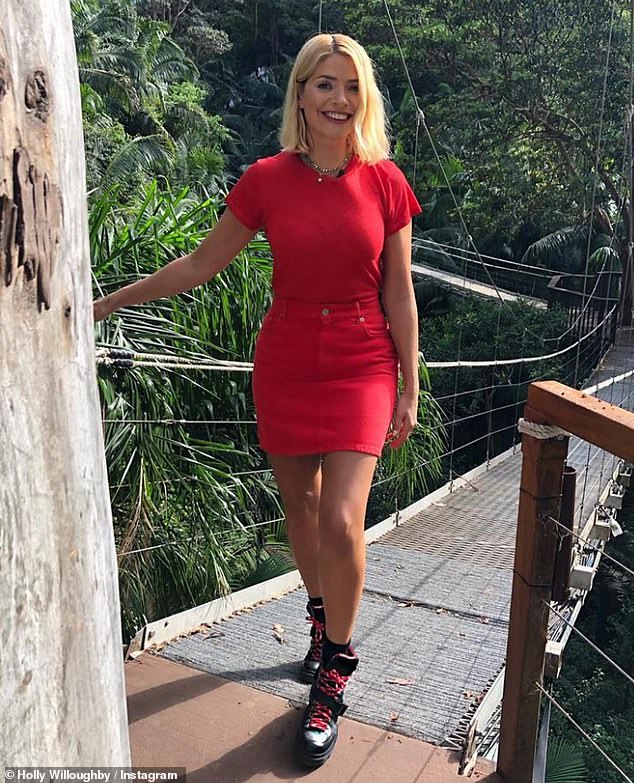 Holly, 37, wore an all-red ensemble for the second episode, teaming a Rag & Bone T-shirt with a matching denim skirt by Scandinavian brand Ganni – the outfit was the brain child of Smith 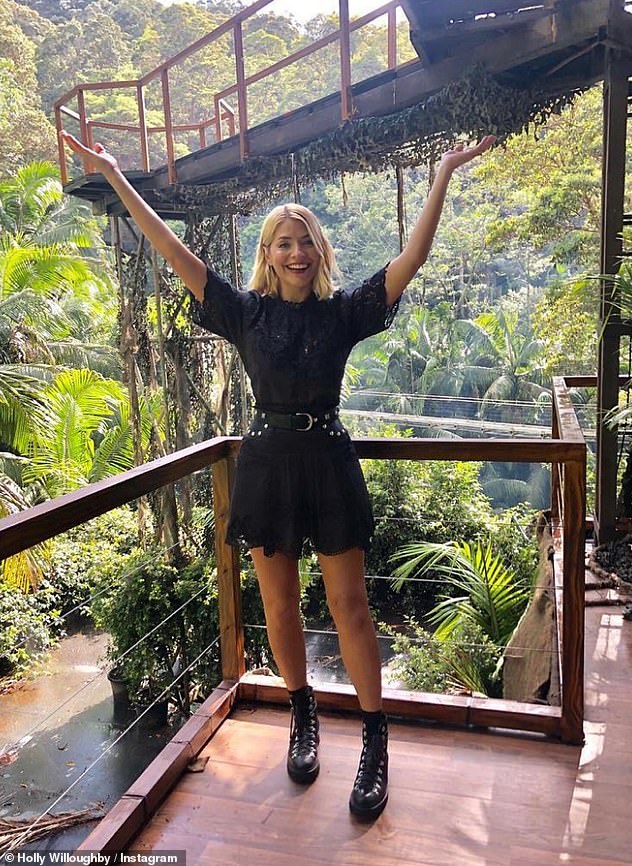 Holly Willoughby has shown off a stream of stylish outfits while on I’m A Celebrity. On the first show, she wore an Isabel Marant top and matching skirt, along with Grenson hiker boots

With Smith’s help, Holly showed off a stream of stylish outfits while presenting I’m A Celebrity this year – causing some of her outfits to sell out within minutes.

For instance, as soon as she tagged the AllSaints Tala Shirt Dress – £128 – she wore on day three, the brand’s website crashed as fans clamoured to buy one. The dress has since sold out at other stockists too, such as John Lewis.

Holly mixed up her usual A-line skirts and pretty blouses with some edgier looks, along with a number of Australian labels including Zimmerman and Auguste The Label.

She also caused a surge in the popularity of hiking boots, after swapping her trademark heels for several sturdy designs in the jungle – resulting in almost every pair she’s worn to sell out.

It started with some brown Grenson boots, followed by a black pair from Topshop and then the £295 Heidi boots from designer Camilla Elphick, leaving retailers scrabbling to get them back in stock.