It follows on from the legacy of the iconic 1964 musical adaptation of PL Travers’ Mary Poppins stories, with Julie Andrews receiving critical acclaim for her portrayal as the magical nanny.

And Emily Blunt brought a spoonful of sugar to the red carpet at the Mary Poppins Returns European Premiere held at the Royal Albert Hall in on Wednesday night.

The actress, 35, who has stepped into Andrews’ shoes as the eponymous character, looked practically perfect in every way in a sweeping blue silk gown.

The Golden Globe winner added a boost to her height with red peep-toe shoes and accessorised the look with -extravagant diamond drop earrings.

Emily wore her hair in soft sleek curls and complemented her fair complexion with a rosy make-up look and pink lipstick. 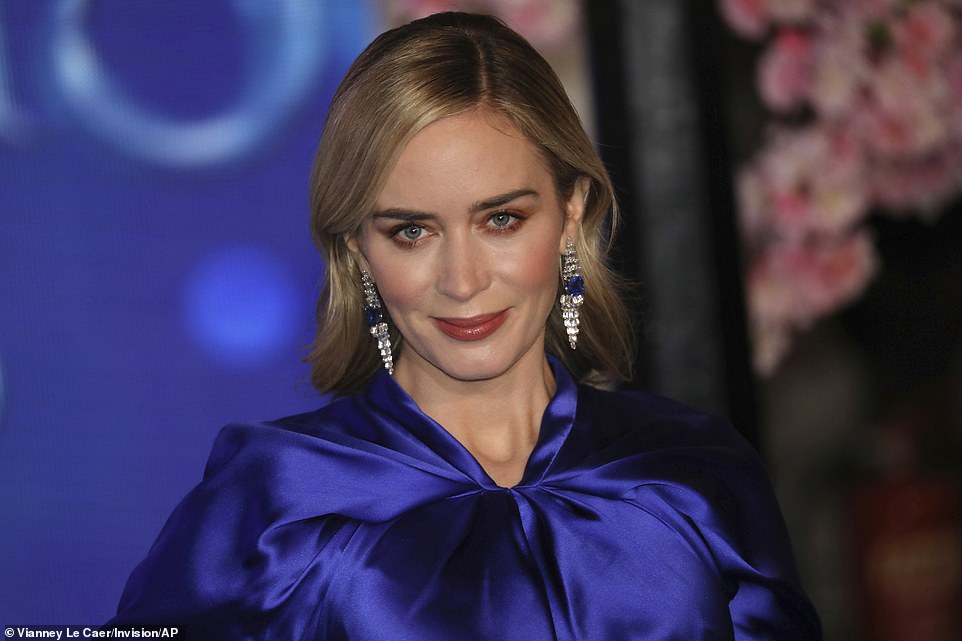 Simply stunning: Emily wore her hair in soft sleek curls and complemented her fair complexion with a rosy make-up look and pink lipstick 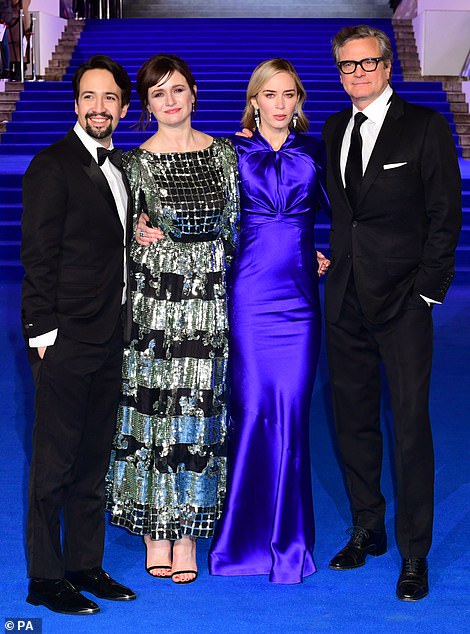 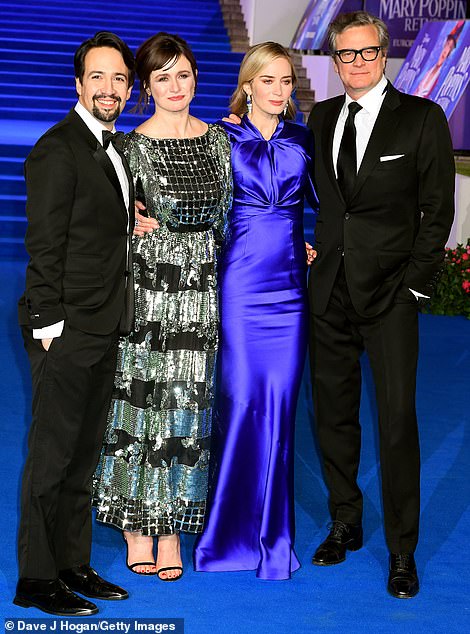 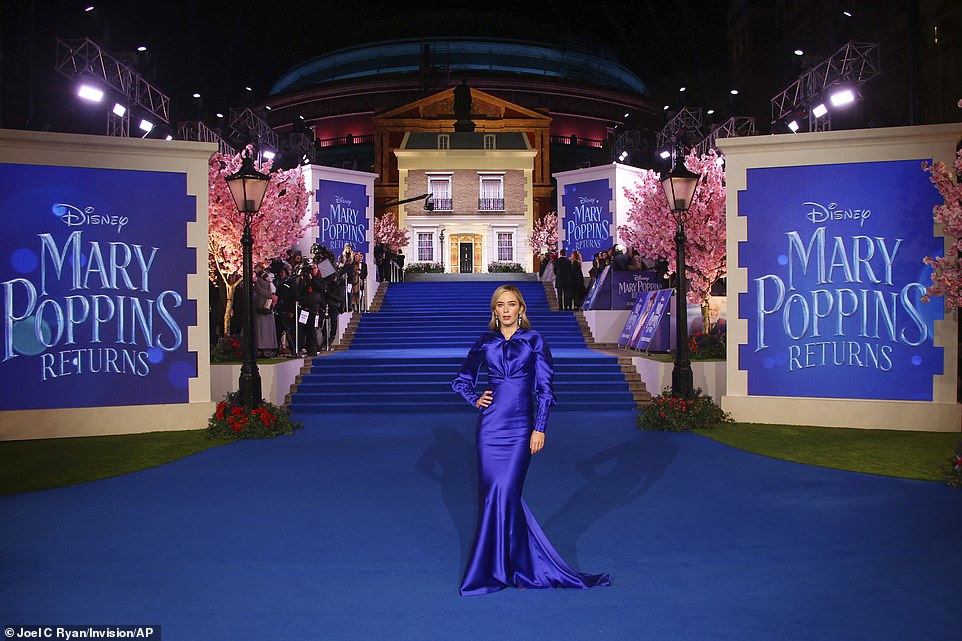 Leading lady: Emily commanded attention as she coordinated her dress with the theme. The actress posed in front of the iconic Royal Albert hall which was surrounded by street lamps and cherry blossoms in homage to the 1930’s London setting

Bringing the sparkle: Emily Mortimer, 47, who plays a grown-up Jane Banks in Mary Poppins Returns, put on a dazzling display in a black and silver fol dress which featured an intricate pattern

Kellly Brook provided some blue carpet sparkle as she attended the European premiere.

The voluptuous brunette caught the eye in a striking blush pink dress while posing for pictures outside the music venue, where she was accompanied by boyfriend Jeremy Parisi.

Drawing attention to her curves, the fitted design ensured Kelly, 39, stood out while rubbing shoulders with guests including Emily Mortimer and leading lady Emily.

Leggy display: Kelly flashed a hint of leg in the dress due to its thigh-high side split as she posed up a storm on the blue-themed carpet 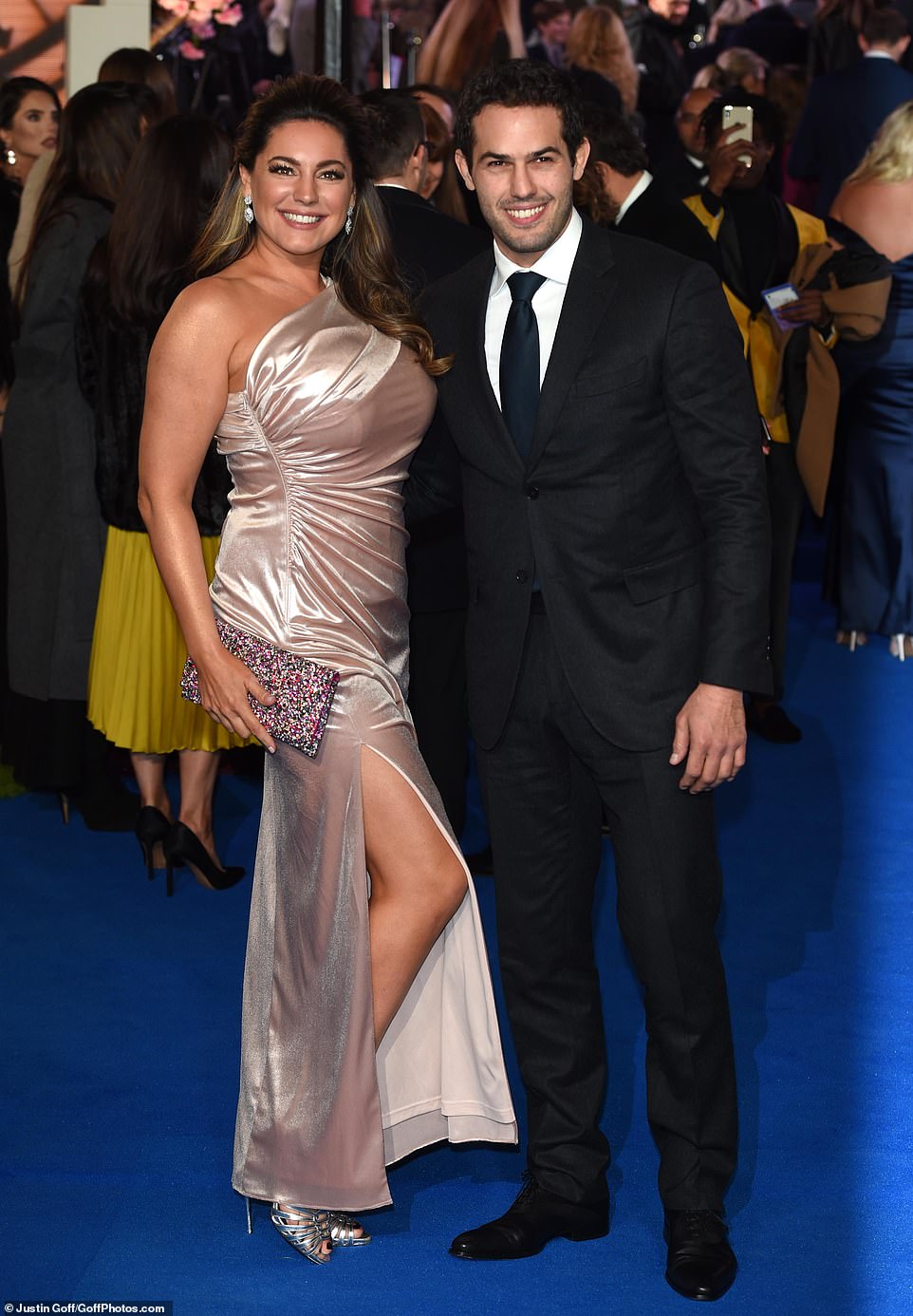 Smitten: The television personality, 39, attended the star-studded premiere with her model boyfriend Jeremy Parisi. The couple looked loved-up as they posed together

Meanwhile, Lin-Manuel Miranda, 38, cut a dapper figure as he took to the red carpet in a black tux with silk lapels and matching bow tie.

Lin helped compose some of the music for the feature film thanks to his extensive talents as a composer, previously working on the Moana soundtrack with Walt Disney as well as creating Broadway hit Hamilton and In The Heights.

In the movie, the actor plays Jack, a lamplighter and former apprentice to Bert, the chimney sweep played by Dick Van Dyke in the original. 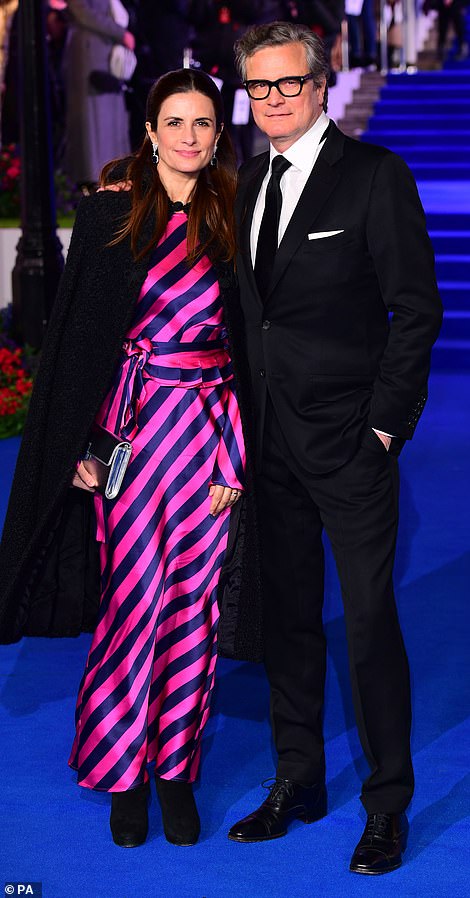 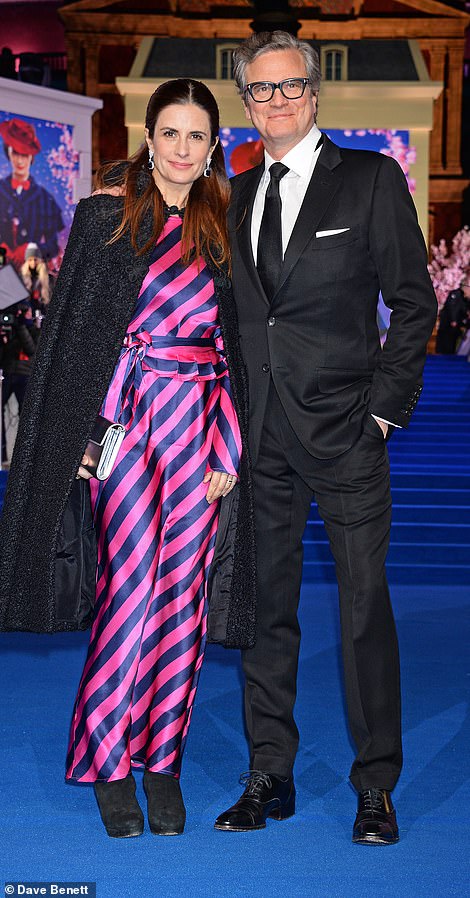 Ahead of the screening Emily revealed to the  her children would get angry when they saw her dressed as the legendary character.

Emily admitted her daughter Hazel, four, would tell her to take her wig off because she didn’t like seeing her as anything other than her mum.

Handsome: Lin-Manuel Miranda, 38, cut a dapper figure as he took to the red carpet in a black tux with silk lapels and matching bow tie 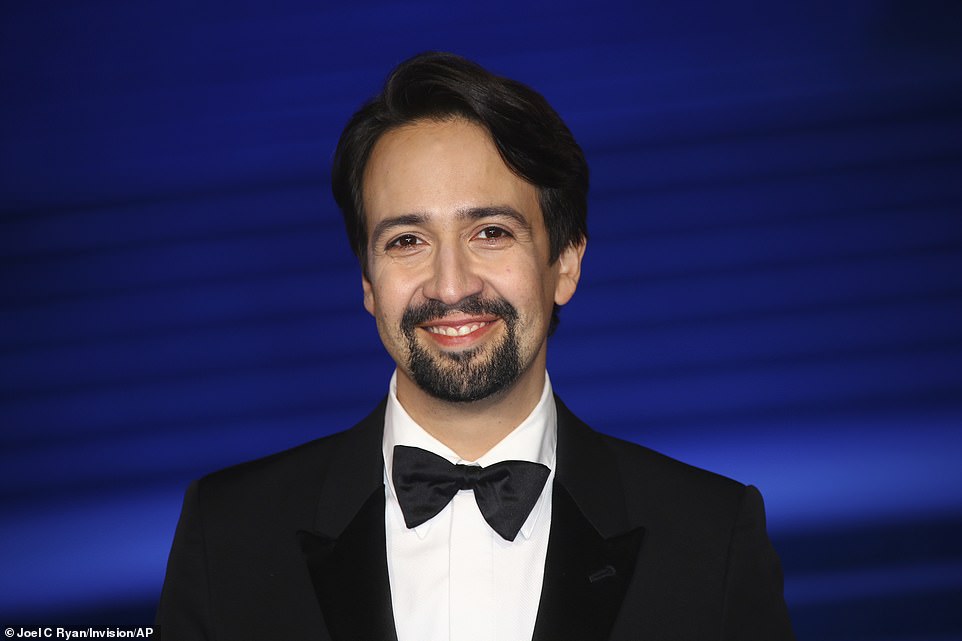 Comedic role: In the movie, the actor plays Jack, a lamplighter and former apprentice to Bert, the chimney sweep played by Dick Van Dyke in the original

Emily is reprising the iconic role 54 years after Julie Andrews first stepped into the character, however the actress said she refused to watch the original movie ahead of her performance.

The Devil Wears Prada star was concerned her acting instincts would be impaired if she were to watch Julie’s performance, and therefore delved into the PL Travers books instead.

Despite this and also her lack of contact with Julie, word reached Emily that Julie had approved of the casting of Emily to play the magical nanny. 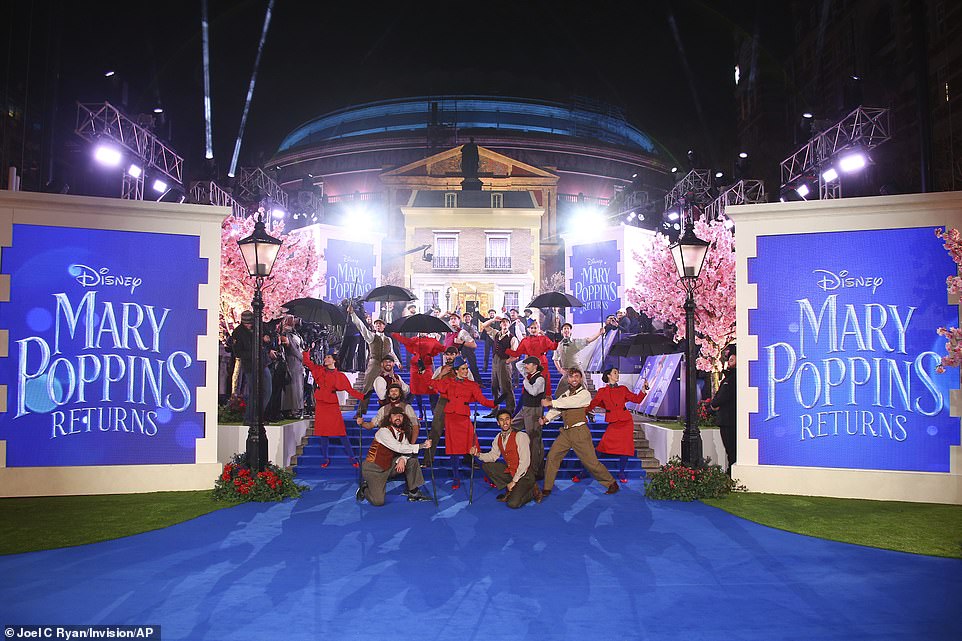 Step in time! Ahead of the stars making an appearance a cast of dancers performed an energetic routine from the film

The mother-of-two said Mary Poppins makes you take a second glance at the world which she added was ‘fragile’ at this point in time, similarly to when the film was first shot in the early 1960s.

Emily said that she believes the film has the potential to bring people together, while also acting as a mirror for people to reflect on themselves.

This will be the first time for a while that Emily will be able to take her kids to see and also doesn’t have to worry about embarrassing her dad.

She added that her children are starting to take a keen interest in her job, as Hazel has begun asking her what scenes she has filmed each day.

Mary Poppins returns follows the story of her revisiting a grown-up Michael and Jane, played by Ben Whishaw and Emily Mortimer.

The film, directed by Rob Marshall, is set in 1930s London, two decades after the events of the original film, it sees Poppins, the former nanny of Jane and Michael Banks, returning after a family tragedy.

Michael is living with his three children (Pixie Davies, Nathanael Saleh, and Joel Dawson) and housekeeper Ellen (Julie Walters), in the house on Cherry Tree Lane.

After Michael has a personal loss, Mary Poppins comes back into the lives of the Banks family. She is joined by a street lamplighter named Jack (Lin-Manuel Miranda), and an eccentric cousin named Topsy (Meryl Streep).

Dick Van Dyke is the only actor from the original to return, portraying the son of one of Mr. Dawes and throws himself into an energetic dance routine on the desk.

When the trailer was released fans were delighted to see Dick, 92, feature, with one writing on Twitter: ‘Dick Van Dyke is now fully Mr Dawes, I’m crying!’

Another Twitter user wrote: ‘So happy to see Dick Van Dyke is back again and playing the same character in the first Mary Poppins movie!’

Adding: ‘He is back dancing on a desk even when he’s 92-years-old!’

One said: ‘Dick Van Dyke playing the same character so many years later makes my heart burst, 6 year old [me] is crying and 21 year old me is also crying.’ 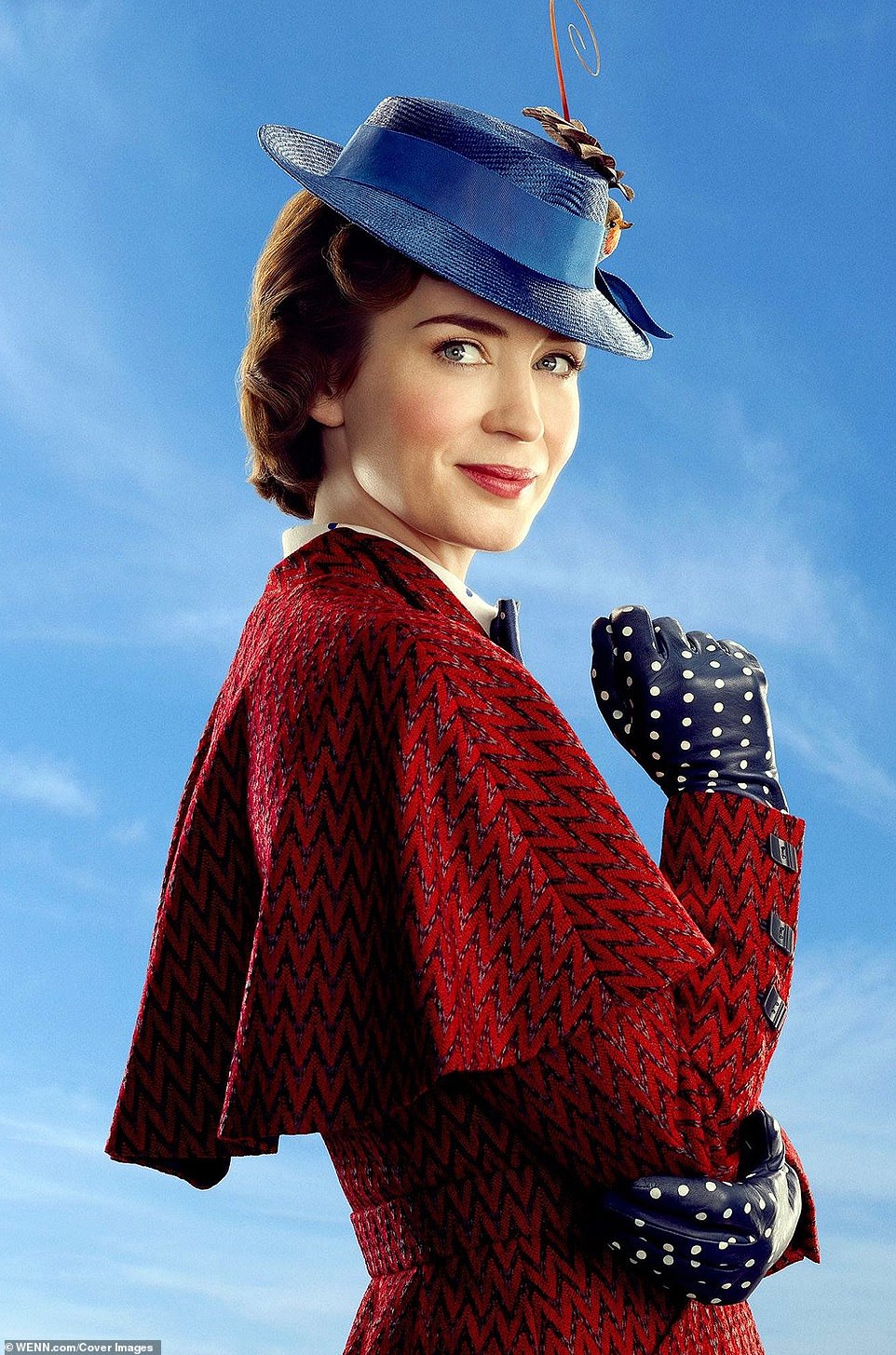 Legendary: Emily is reprising the iconic role 54 years after Julie Andrews first stepped into the character, however the actress said she refused to watch the original movie ahead of her performance