A Pennsylvania man who turned 101 on December 1 puts his long life down to having a Coors Light beer every day.

Andrew E. Slavonic – a World War II veteran – has enjoyed a can of Coors daily since 1996 but switched to Coors Light approximately halfway through the time he’s had his 22-year habit for the refreshment.

When asked the secret to reaching centenarian status, Slavonic revealed it was cracking open a can for his afternoon beverage, and now MillerCoors has rewarded him and his son with the trip of a lifetime and plenty more beer to keep him going. 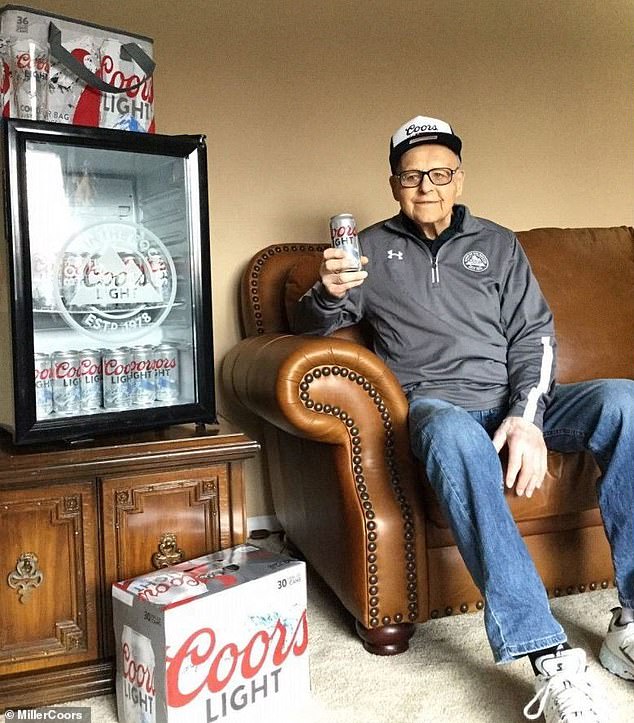 Andrew Slavonic, who turned 101 December 1, has had Coors daily since 1996. The World War II veteran switched to having Coors Light every day at 4pm 15 years ago

Slavonic’s story went viral last week after his son Bob shared that an apple a day may not be the secret to optimum health.

‘In 1996, he actually started drinking regular Coors beer,’ Bob told . ‘He switched to Coors Light beer about 15 years ago. I think I am the one to blame for the switch because that is all that I have been drinking for about the past 25 years.’

Coors Light was introduced to the market 40 years ago in 1978, and has a lower alcohol content of 4.2 percent compared to the 5 percent in regular Coors.

There are also 46 fewer calories in the lighter silver can and the carbohydrate content is only 5 compared to the 11.3 in the regular blue can.

The centenarian’s son explained that he keeps to a rather regular routine and stays active for his age by rising early. 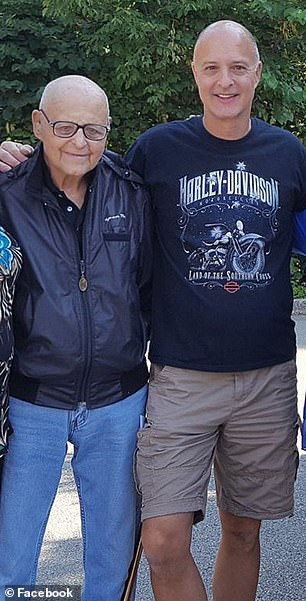 His son Bob (right) has been drinking Coors Light for the past 25 years. MillerCoors rewarded them with a trip to their brewery, branded merchandise and more beer

‘He gets up at 8.30 every day and gets dressed and goes into the kitchen ready to cook his own breakfast,’ Bob said. ‘Later, after he makes his own lunch, he goes into his home office and reads through the daily newspaper.’

In order to read the news and his mail, Slavonic, whose sight has been affected by macular degeneration, uses a magnifying screen given to him by Veteran’s Affairs.

But the timing of his beer is absolutely key according to Slavonic and sometimes he’ll have two or three.

His son, who has lived with him since 2016, shared: ‘Around 4pm, he tells me that it is 4pm, and it is time for our beer. He gets his Coors Light from the garage beer fridge and enjoys a nice cold one.’

Slavonic added: ‘We got to have the one at 4 o’clock,’ Slavonic said. ‘That’s the most important one.’

Now that Bob is living with his father in McMurray, he has taken over cutting 0.6 acres of grass and shoveling snow, but admits his dad remained outdoorsy until two years ago.

Slavonic served as both a nose gunner on the 24 Liberator and a top turret in gunner on the B17 Flying Fortress during WWII. He also trained new pilots that were transitioning from 2-engine to 4-engine planes.

His son, Bob, said he was surprised with all the attention he has received in the past week regarding his decades-long fandom and said the ‘look on his face was absolutely priceless’ when MillerCoors gifted him hats, pullovers, sweatshirts, his favorite beer and a trip to Golden, Colorado.

‘Cheers to you, Andrew E. Slavonic, and happy 101st! This World War II Air Force veteran credited his long life to his daily Coors Light. Thank you for your service. Here’s to many more!’ the brand tweeted.

The publicity was a huge win for the family who said they had tried to contact MillerCoors about the super fan but received no response initially.

Slavonic wouldn’t be the first centenarian to credit the brand for a long life.

When Milwaukee, Wisconsin woman Clotilda Kort turned 100 this summer, she said she drinks a Miller 64 every day 2pm, crediting the drink for making her feel like she’s 25.

Trump says that Cohen made up 'lies' about him
Brett Kavanaugh's mother cries at his confirmation hearing
Megyn Kelly CVS spree to stock up on fairy lights
Facial recognition on smartphones can be tricked by a 3D-printed head
Austrian duke 'blasts three relatives to death with a shotgun at family castle over inheritance'
Boy, 18, is feared dead after slipping into a blowhole while hiking at a scenic California beach
Middle school teacher testifies that she was COERCED into performing oral sex on male student
Six-year-old girl shrieks 'I'm flying' as she flies on model dragon made by her father