The chief financial officer of Chinese telecom giant Huawei asked a Canadian court to grant her bail in exchange for collateral totaling more than $11million in real estate while promising to fund her own private security detail that would monitor her movements.

Meng Wanzhou, the CFO of Huawei and daughter of its founder, was detained at the request of the U.S. during a layover at the Vancouver airport on Dec. 1 – the same day that Presidents Donald Trump and Xi Jinping of China agreed to a 90-day cease-fire in a trade dispute that threatens to disrupt global commerce.

The U.S. has accused Huawei of using a Hong Kong shell company to sell equipment in Iran in violation of U.S. sanctions.

It also says that Meng and Huawei misled banks about the company’s business dealings in Iran.

In response to the arrest, China raised the pressure on the United States and Canada, where the arrest has roiled financial markets. 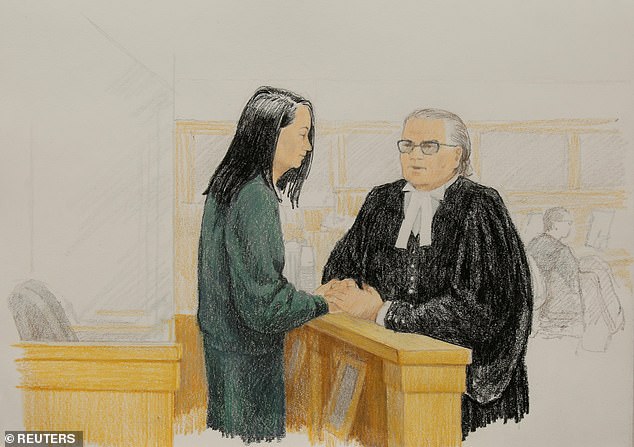 Meng Wanzhou, the CFO of Huawei and daughter of its founder, was detained at the request of the U.S. during a layover at the Vancouver airport on Dec. 1. The sketch above shows her with her attorney at British Columbia Supreme Court in Vancouver on Monday 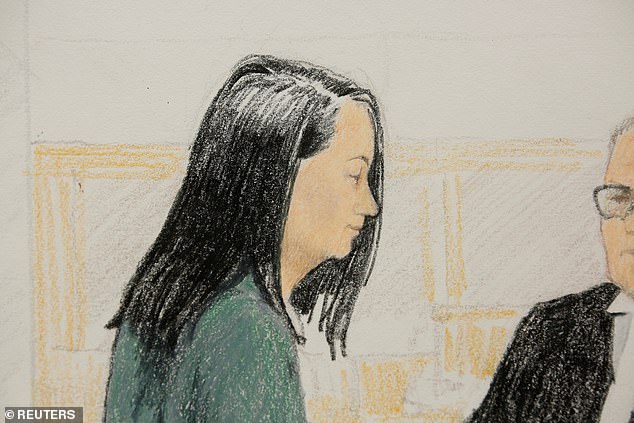 The U.S. has accused Huawei of using a Hong Kong shell company to sell equipment in Iran in violation of U.S. sanctions. Meng has argued that she should be allowed bail while vowing she would pay for her private security detail which would enforce the terms of her bail 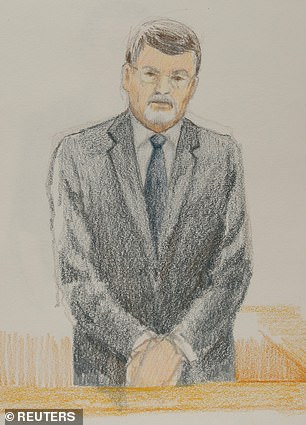 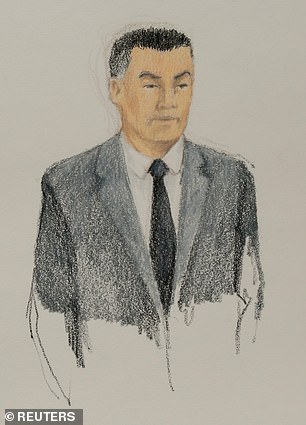 Called by the defense, Scott Filer (left) of Lions Gate Risk Management group said his company would make a citizen’s arrest if she breaches bail conditions. Stephen Tan (right), another defense witness, is the co-founder of electronic monitoring firm Recovery Science. If she is granted bail, he has also offered to help monitor Meng 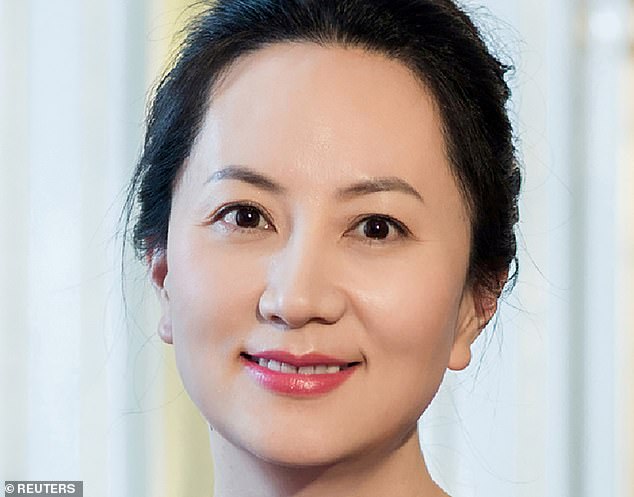 The arrest of Meng Wanzhou (seen in the above handout photo), 46, has fueled U.S.-China trade tensions at a time when the two countries are seeking to resolve a dispute over Beijing’s technology and industrial strategy

Her arrest has fueled U.S.-China trade tensions at a time when the two countries are seeking to resolve a dispute over Beijing’s technology and industrial strategy.

Both sides have sought to keep the issues separate, at least so far, but the arrest has roiled markets, with stock markets worldwide down again Monday.

China formally protested to the ambassadors of both Canada and the United States over the weekend.

In urging the court to reject Meng’s bail request, a prosecutor said Friday the Huawei executive had vast resources and a strong incentive to bolt: She’s facing fraud charges in the United States that could put her in prison for 30 years.

On Monday, David Martin, Meng’s lawyer, reiterated that Meng was willing to pay for a surveillance company to monitor her and wear an ankle monitor.

Called by the defense, Scott Filer of Lions Gate Risk Management group said his company would make a citizen’s arrest if she breaches bail conditions.

Under the defense proposal, Meng’s travels would be restricted to Vancouver and surrounding municipalities.

If she is granted bail, he has also offered to help monitor Meng, according to the . 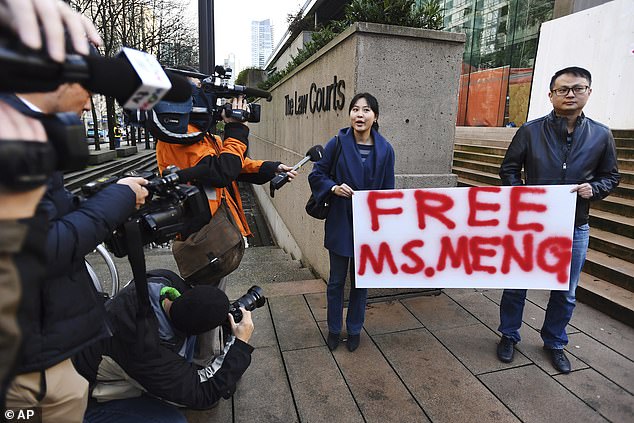 Protesters were seen outside the Vancouver, British Columbia courthouse before Meng’s bail hearing on Monday

The hearing has sparked widespread interest, and the courtroom was packed again Monday with media and spectators, including some who came to support Meng.

One man in the courtroom gallery brought binoculars to have a closer look at Meng, her lawyers and the prosecution team.

Outside court a man and woman held a sign that read ‘Free Ms. Meng.’

Le warned both countries that Beijing would take steps based on their response.

Asked Monday what those steps might be, Chinese Foreign Ministry spokesman Lu Kang said only that ‘it totally depends on the Canadian side itself.’

The Canadian province of British Columbia has already canceled a trade mission to China amid fears China could detain Canadians in retaliation for Meng’s detention.

Stocks around the world fell Monday over investor concerns about the continuing U.S.-China trade dispute, as well as the cloud hanging over Brexit negotiations after Britain’s prime minister postponed a vote on her deal for Britain to exit the European Union.

In the U.S., stocks were volatile, tumbling in the morning and then recovering ground in the afternoon.

The United States has slapped tariffs on $250billion in Chinese imports, charging that China steals American technology and forces U.S. companies to turn over trade secrets.

Tariffs on $200billion of those imports were scheduled to rise from 10 percent to 25 percent on Jan. 1.

But over dinner Dec. 1 with Xi in Buenos Aires, Argentina, Trump agreed to delay the tariff increase for 90 days, buying time for more negotiations.

President Trump (far right) and President XI (far left) agreed to call a truce in their long-running trade dispute at the G20 last Saturday, the same day that Meng was arrested

‘They need a trade deal. They don’t want the tariffs to go up to 25’ percent, said Perry, who publishes the ‘US China Trade War’ blog.

‘This is Damocles’ sword hanging over the Chinese government.’

Huawei, the biggest global supplier of network gear for phone and internet companies, has become the target of U.S. security concerns because of its ties to the Chinese government.

The U.S. has pressured other countries to limit use of its technology, warning they could be opening themselves up to surveillance and theft of information.

‘I must tell you that not a single piece of evidence have they ever presented to back their allegation,’ he said.

‘To create obstacles for companies’ normal operations based on speculation is quite absurd.’

Canadian officials have declined to comment on Chinese threats of retaliation, instead emphasizing the independence of Canada’s judiciary and the importance of Ottawa’s relationship with Beijing.