On Sunday night, she was the belle of Capital’s Jingle Ball as she joined a host of stars to perform onstage at ‘s O2 Arena.

And Cheryl’s busy schedule continued on Monday, when she stepped out once again in the English capital to attend the launch of her talent show The Greatest Dancer.

The 35-year-old beauty effortlessly commanded attention, arriving at the upscale May Fair Hotel in a black minidress, in which she displayed her jaw-dropping curves. 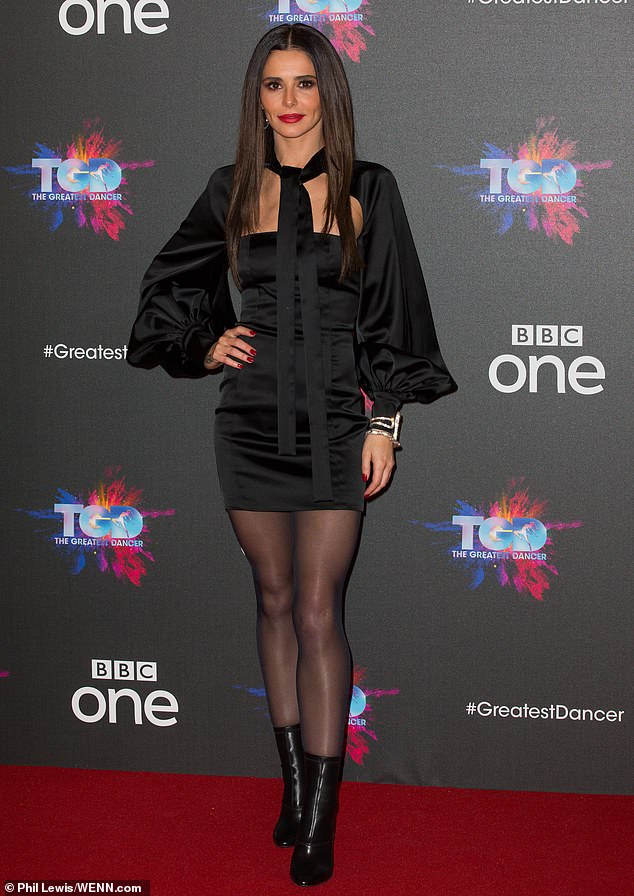 The big unveiling: Cheryl attended the launch of her new talent show The Greatest Dancer at London’s Mayfair Hotel on Monday night

The mother-of-one’s frock of choice featured billowing sleeves and an elongated pussy bow and was teamed with black stockings and matching leather boots.

Adding an extra touch of glamour to her stylish look, Cheryl — who recently released her pop single Love Made Me Do It — accessorised with a range of jewellery, which included a chunky gold bracelet and large hoop earrings.

With her chestnut brown locks falling beyond her shoulders in a lustrous blowout with a centre parting, the former Girls Aloud star highlighted her natural beauty with a rich palette of makeup that included smokey eyeshadow and bold red lipstick. 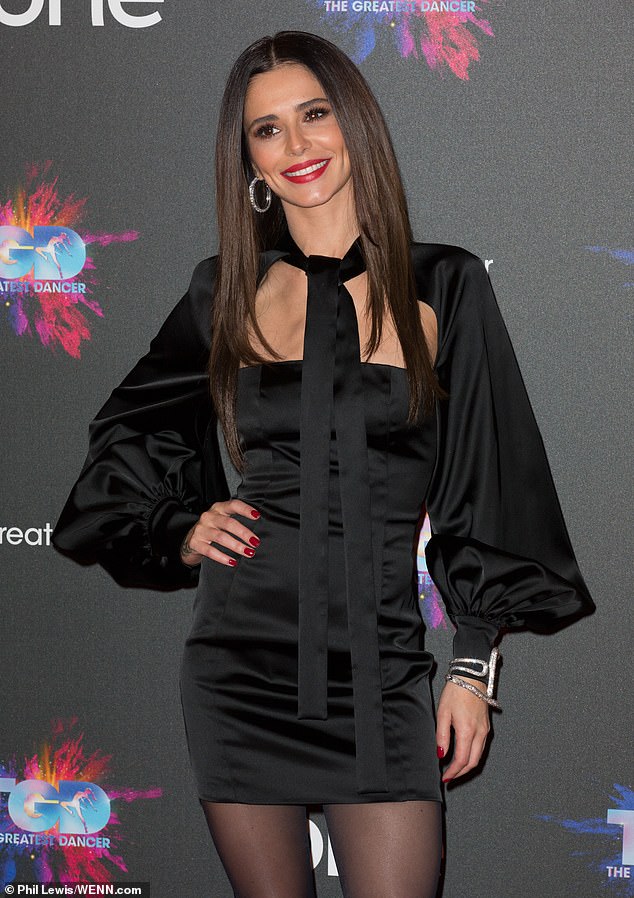 Jaw-dropping: The 35-year-old beauty effortlessly commanded attention, arriving at the exclusive event in a black minidress, in which she displayed her jaw-dropping curves

Billowing: The mother-of-one’s frock of choice featured billowing sleeves and an elongated pussy bow and was teamed with black stockings and matching leather boots

Steal Cheryl’s style in a chic dress by Attico

Stepping out to the Greatest Dancer launch, Cheryl looked incredible in a slinky black dress by Attico.

We love the straight corset neckline, balloon sleeves and super chic pussy-bow tie-neck detail! Cheryl then teamed it with sheer tights and ankle boots for a sleek all-black ensemble.

If you’re missing the perfect LBD for party season, then why not take your lead from Cheryl and snap up this number? After all, it is by cult fashion-pack label Attico, which has been worn by everyone from Beyonce, to Rosie Huntington Whiteley.

Click right to shop Chezza’s dress over at FWRD – it’s currently massively reduced in the sale so there’s no time like the present!

Or get the look for even less with the high-street doppelgangers we’ve hunted down for you below.

At the event, she was joined by fellow show judges Matthew Morrison and Oti Mabuse, who have earned names for themselves on Broadway and on Strictly Come Dancing, respectively.

Also joining the party were Alesha Dixon and Jordan Banjo, who will serve as co-hosts on the highly anticipated BBC show once it launches early next year.

Eight-part series The Greatest Dancer is another foray into reality TV competition for Simon Cowell and will follow the search for the UK’s best dancers from a broad variety of genres.

‘With the continued success of Strictly Come Dancing, the BBC is undoubtedly the home of dance,’ Kate Phillips, controller of entertainment commissioning for the BBC, said at the time the show was announced. 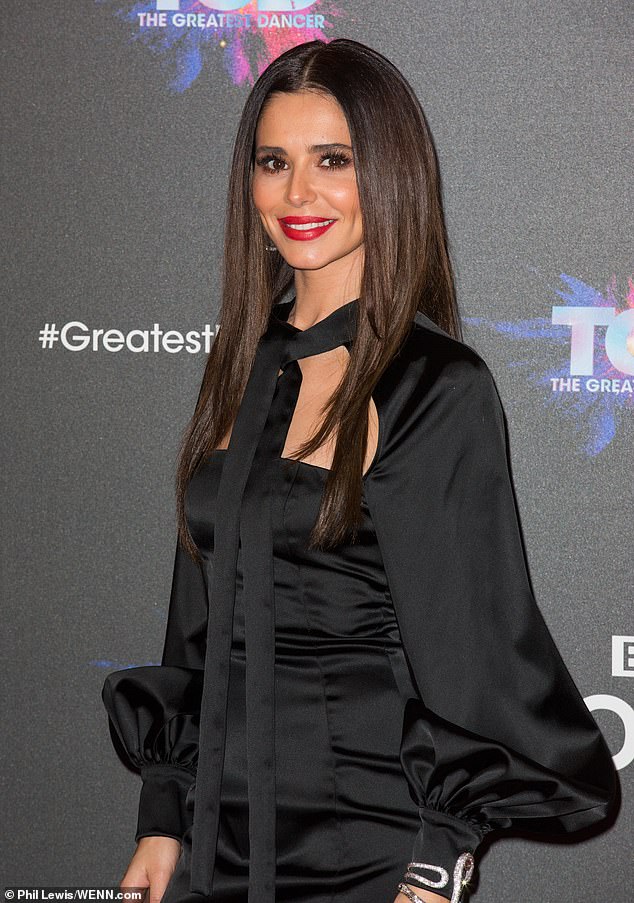 Hair we go! The singer chestnut brown locks fell beyond her shoulders in a lustrous blowout 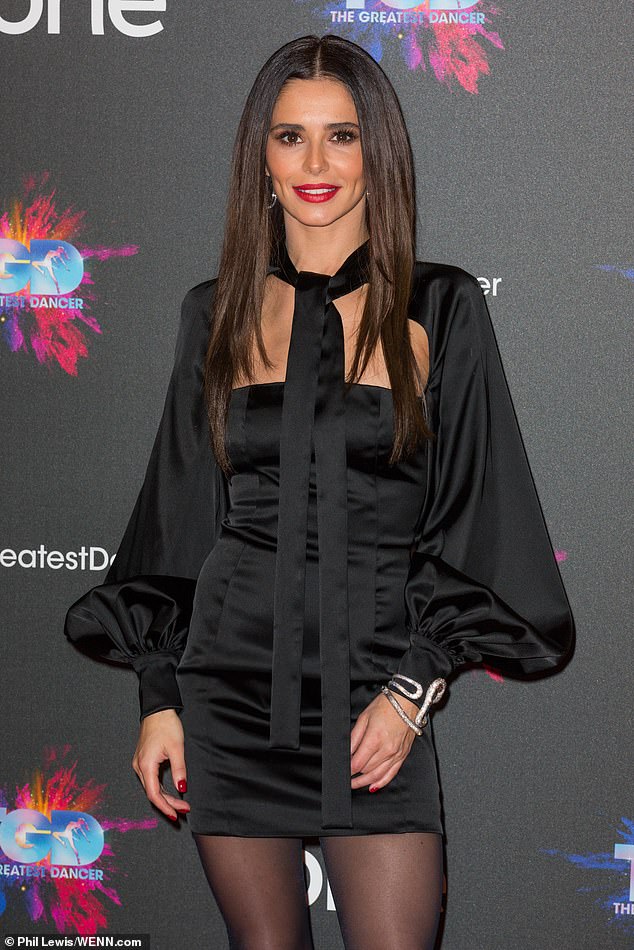 All that glitters: The former Girls Aloud star accessorised with a range of jewellery, which included a chunky gold bracelet and large hoop earrings

‘By launching The Greatest Dancer we want to give the vast array of dance talent across the UK the chance to shine.’

Cheryl, who is making her musical comeback after four years, lost a deal rumoured to be worth £4million with the hair and beauty giant, according to .

And a source has now told MailOnline: ‘Following discussions with Cheryl and her team earlier this year, we can confirm that our spokesmodel partnership has come to an end, however she continues to be a friend of the brand.’

It was continued to MailOnline: ‘We’re very proud to have worked with Cheryl for nine years and to have been part of her story, sharing and celebrating all things “worth it.”’ 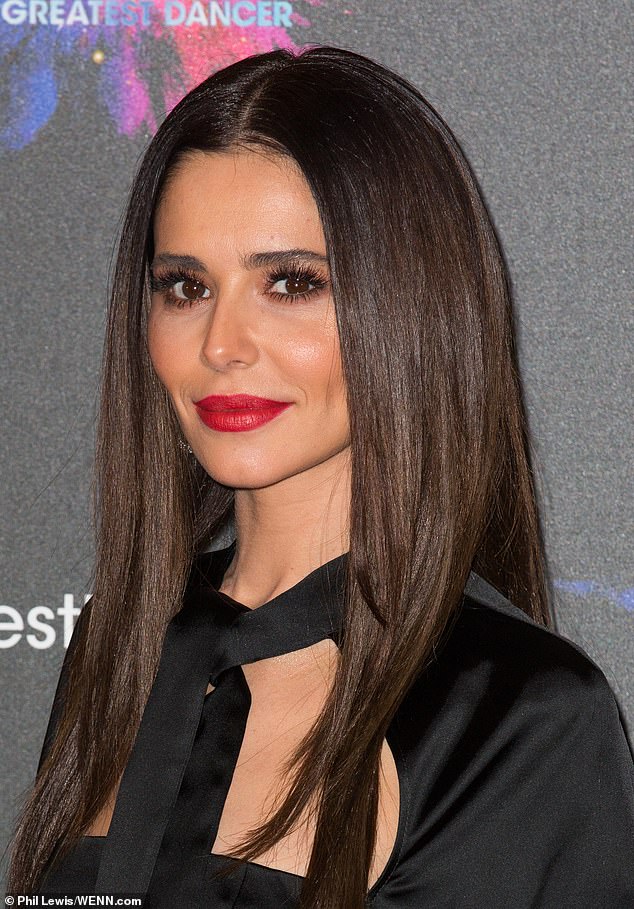 Natural beauty: She highlighted her natural beauty with a rich palette of makeup that included smokey eyeshadow and bold red lipstick

Pose: She effortlessly commanded attention as she posed for photographers on the red carpet

Speaking of her partnership with the brand over the years, Cheryl added: ‘I have had an amazing experience as L’Oreal Paris’ UK spokesmodel for the past nine years and have loved working with the team over there.

‘It always felt like more than a partnership and I would like to thank them all for the opportunities it has afforded me,’ she revealed.

This comes after a beauty source told The Sun: ‘It’s a hammer blow for Cheryl at this stage of her career. L’Oréal has been her most regular income.’

‘L’Oréal has been her most regular income for close to the past decade. It’s kept her rich without having to do much work. 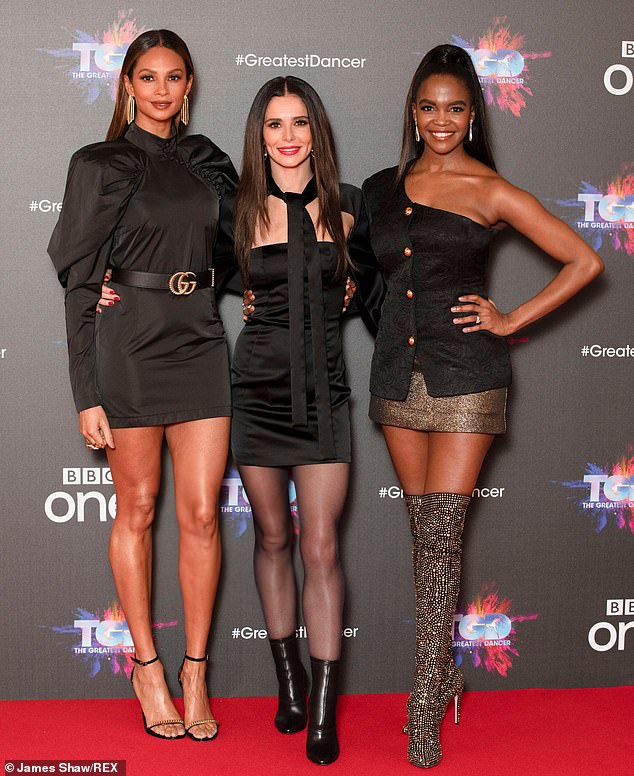 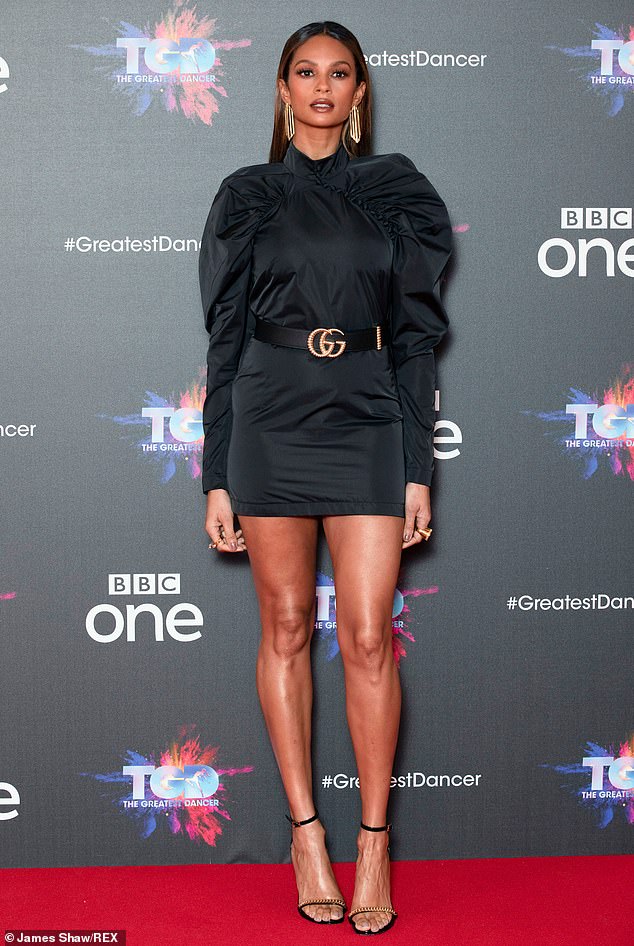 Breathtaking: Alesha wowed as she posed on the red carpet in a thigh-grazing black dress, which featured billowing sleeves and a high neckline 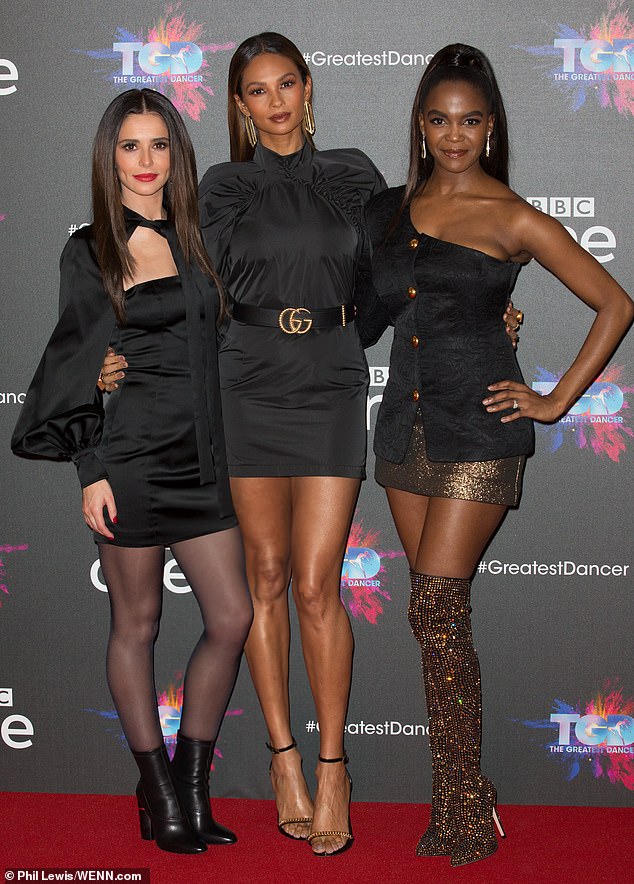 According to the website, Cheryl’s luxurious line comes with personalised brushes, a mini zip-up bag and a coat hanger for the hair pieces and has been devised alongside hair expert Shane O’Sullivan.

Cheryl said: ‘I’ve been wearing and testing Easilocks for a long time now.

‘We’ve based this collaboration on my “GO TO” looks, favourite shades and with Shane’s expertise & innovative techniques in hair processing we’ve really brought hair extensions to a whole new level.’ 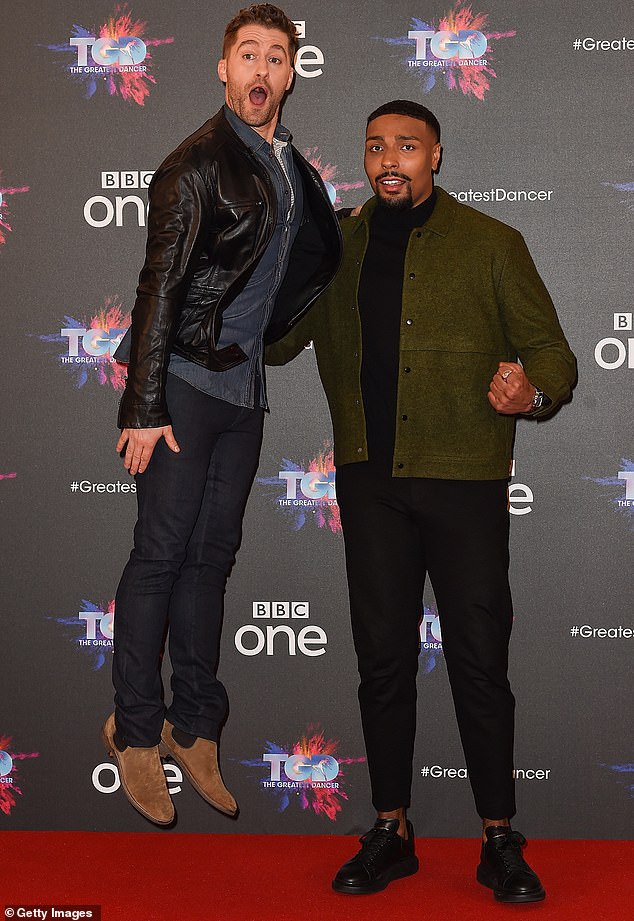 Playful mood: Show judge Matthew Morrison was in a playful mood as he leapt into the air while posing beside co-host Jordan Banjo 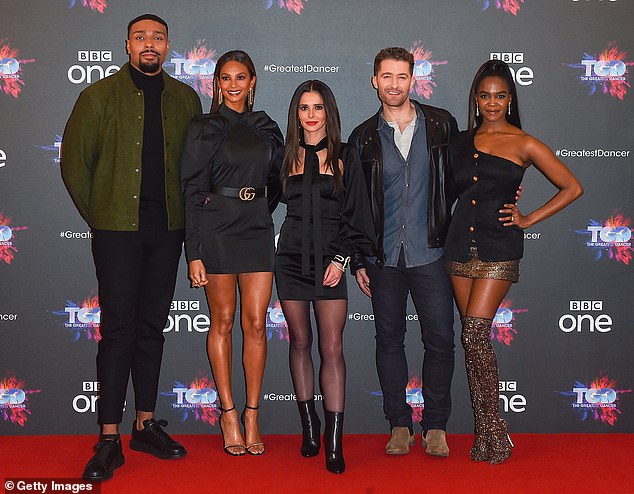 The squad: The stars posed together for a group shot ahead of the anticipated show unveiling 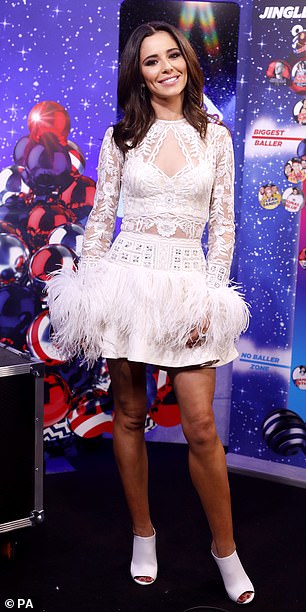 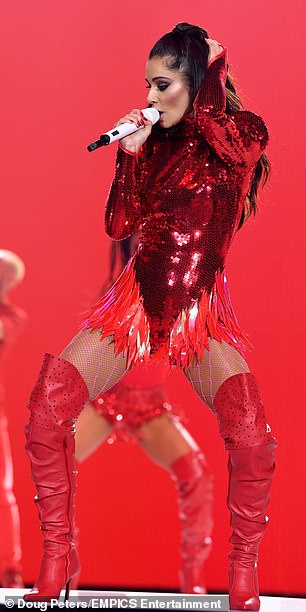 Red hot: On Sunday, Cheryl took to the stage at London’s The O2 for Capital’s Jingle Bell Ball, hitting the red carpet in winter white (left), before performing in raunchy red (right) 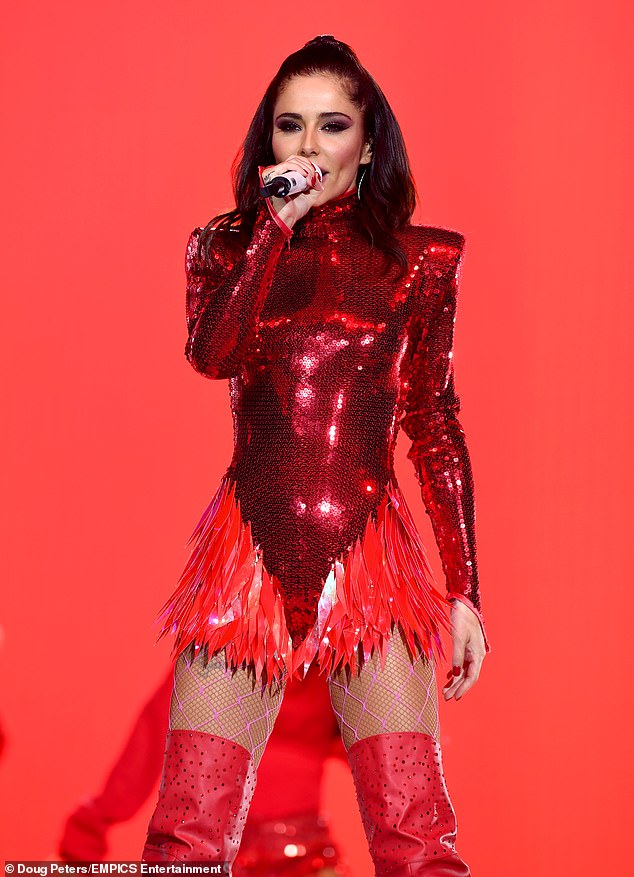 Big night on the town: The singer, 35, looked incredible in a red sequin leotard, teamed with matching leather thigh-high boots and fishnet tights 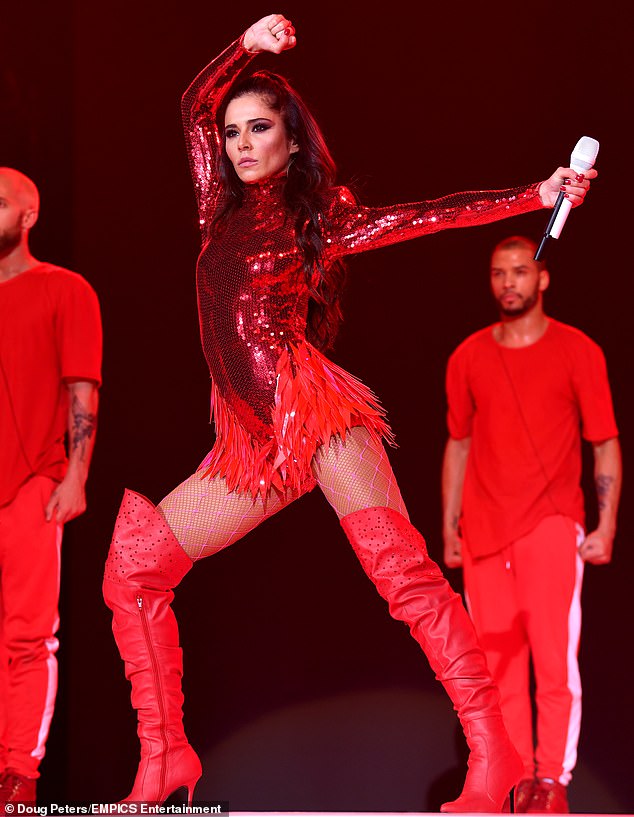 These boots were made for dancing: She teamed her ensemble of choice with with a pair of bejewelled thigh-high red boots

Steinhoff's former CEO says not aware of accounting...
Tour de France 2019 has record 30 mountain passes
Man is slammed after suggesting shaking hands with a women is 'patronizing'
Climate change protesters split over whether to continue demos
Hilarious photographs reveal comebacks people use when they're asked to send nude pictures
1,250-mile road approved through Russia linking Europe to China
Prince Harry puts private jet storm behind him as he attends the Rugby League Challenge Cup Final
Lawyer who quit after being rapped for 'sexual activity' with colleague may be hauled back to court