The first class passenger who gave up his seat to a Florida mother who was travelling with her sick baby to Phildelphia Children’s hospital has been identified.

DailyMail.com can exclusively reveal that the generous man in seat 2D on American Airlines flight 588 from Orlando to Philadelphia last week is 46-year-old Jason Kunselman, an industrial engineer from Mechanicsburg, Pennsylvania.

Jason had been flying back to his home state after working on a project in Florida when he saw Kelsey Zwick, with her 11-month-old baby daughter Lucy, waiting to board the plane to Philadelphia. 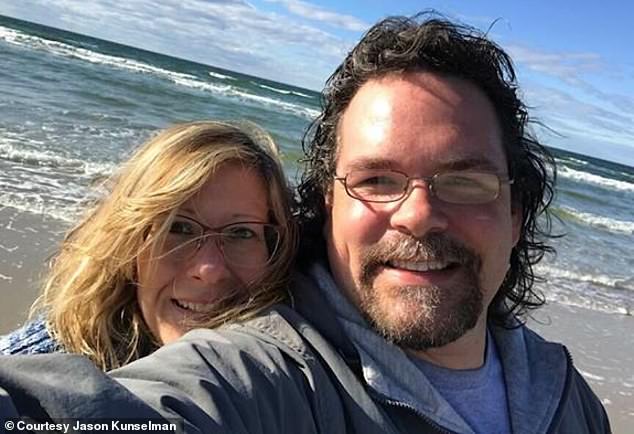 Jason Kunselman, 41, has been identified as the man in seat 2D who gave up his seat for a mother with a chronically ill 11-month-old baby daughter 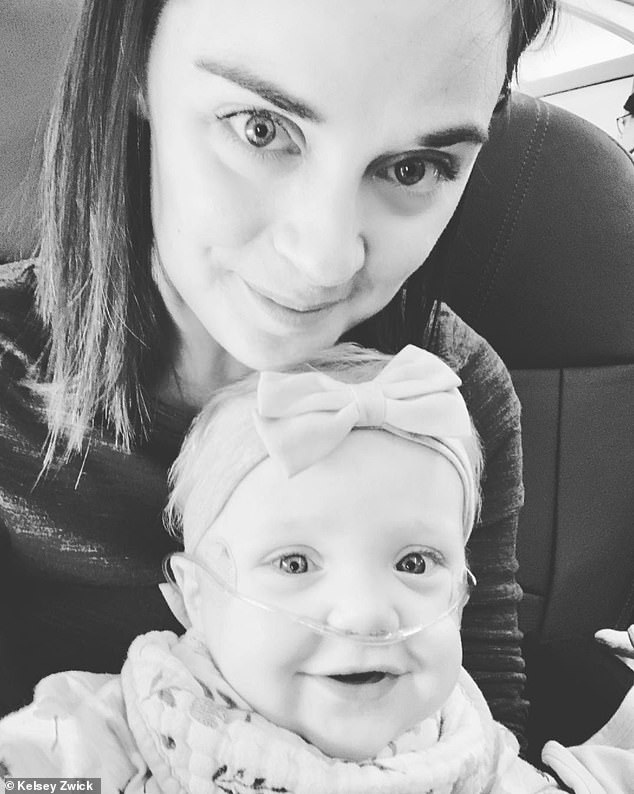 Kelsey Rae Zwick was travelling from Orlando to Philly with her 11-month-old daughter, Lucy, for treatment at the Children’s Hospital when a complete stranger made a touching gesture 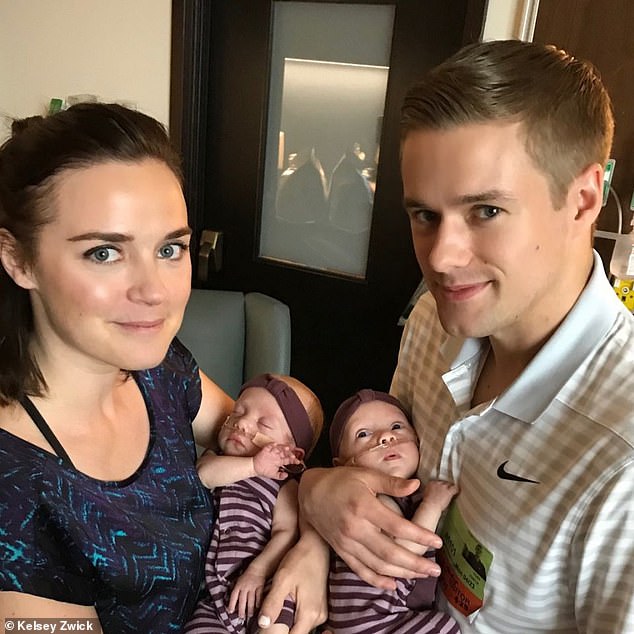 ‘She had an oxygen machine for her daughter. It couldn’t be put over her head and , she had to have it with her the whole time. It was so touching seeing the little girl with her oxygen. I was tearing up as I saw her,’ Kunselman told DailyMail.com.

‘Kelsey was pre-boarding and I saw the young mother traveling with a child that needed oxygen. She was so tiny.’

Kelsey was taking the infant to the Children’s Hospital of Philadelphia because her baby suffers from severe chronic lung disease as a result of a complication during the pregnancy.

Upon seeing how small baby Lucy was and the fact she needed to travel with specialist medical equipment, the American Airlines Executive Platinum frequent flier thought nothing of the gesture he was about to make and offered her his comfy spacious seat at the front of the plane. 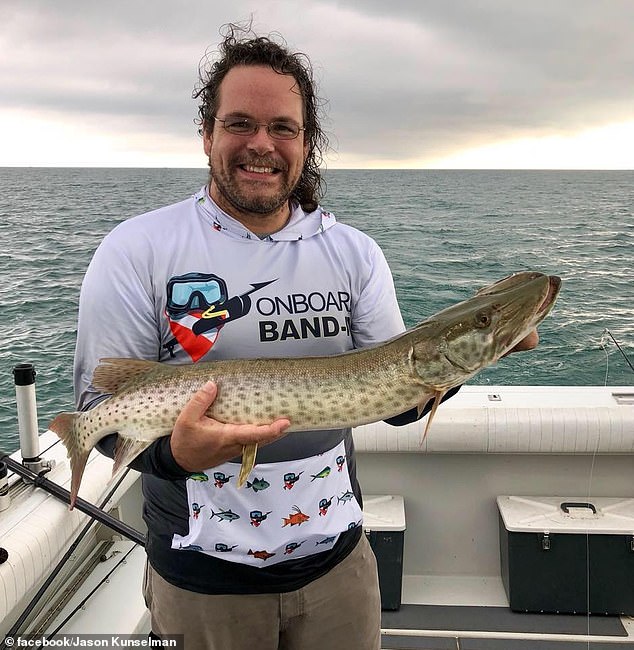 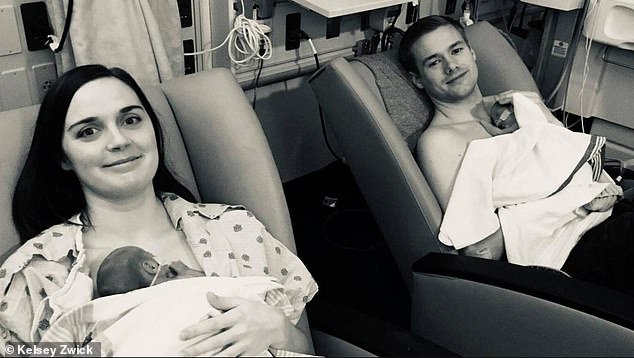 The touching gesture, which Ms Zwick said she ‘can’t wait to tell Lucy someday’, brought her to tears. Kelsey has since been in touch with Jason. She said, ‘the world clearly needed kindness’

‘I expected to see her in the front since she had the oxygen machine with her but when I boarded she was in the back. So I asked the flight attendant if she thought the young lady with the baby would be more comfortable in my seat.

He approached a flight attendant and asked if the mother and baby he had seen might be more comfortable sitting in first class.

As the pair switched seats, Jason could see that Kelsey was crying with gratitude. But the emotion also got to Jason too, who began to tear up at what he had just witnessed.

‘I just hoped that she had a better flight with more room,’ he said.

His act of kindness saw him occupying Kelsey’s previous seat at the back of the plane. He jokes that being so far back almost caused him to miss his connection to Harrisburg. 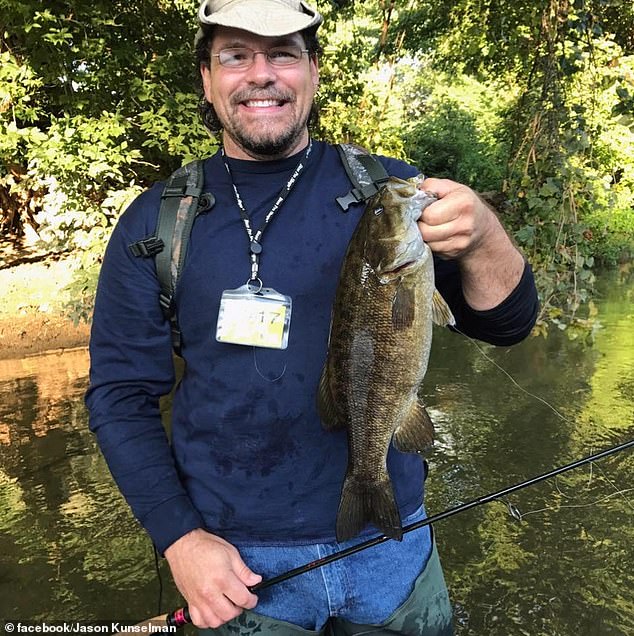 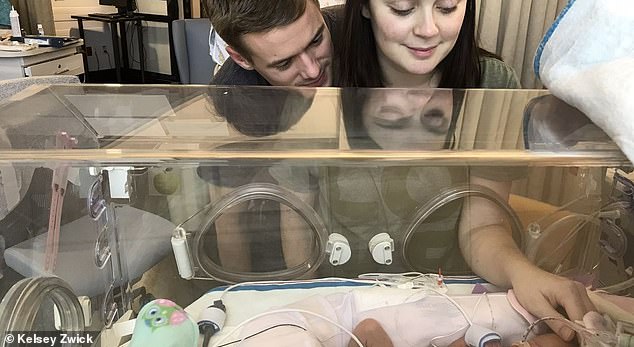 Lucy, a twin born 11 weeks early, stayed in the NICU for 100 days after she was born. Her sister stayed 86 days 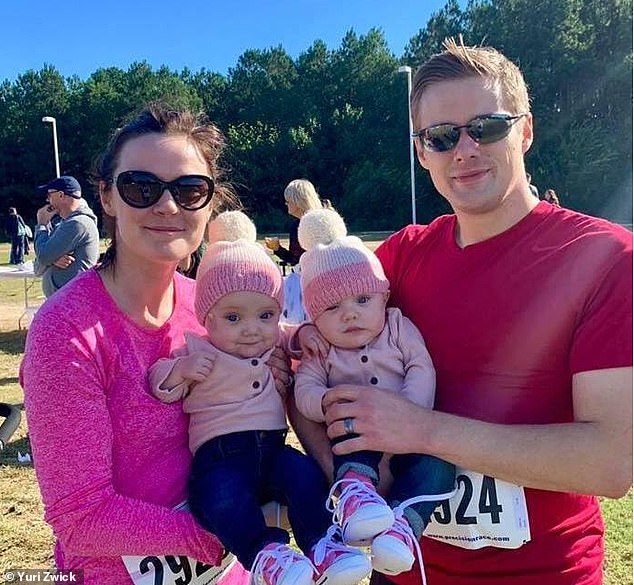 The past two years have been quite a journey for Kelsey Zwick, her husband, and their twin daughters, Lucy and Eva. The girls were born at 29 weeks weighing just over 2lbs each 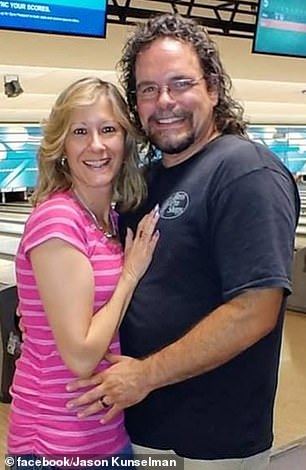 Jason was told that his good deed had gone viral after wife, Kristy, saw the story online

After the flight was over, lots of passengers on board the plane thanked him for his gesture.

Meanwhile, Jason, who flies around four times a week for work and has American Airlines’ top frequent flier level of status, thought nothing more of his good deed until Kelsey wrote about her experience on Facebook.

‘To the man in 2D. Today you were traveling from Orlando to Philly. I don’t know you, but I imagine you saw us somewhere. I was pushing a stroller, had a diaper bag on my arm and also lugging an oxygen machine for my daughter. We had smiles on our faces as we were headed to see her ‘friends’ at CHOP (Children’s Hospital of Philadelphia)’, Zwick began in her much-talked-about Facebook post.

‘We pre-boarded the plane, got cozy in our window seat and made jokes to those around us about having to sit by my yelling-but-happy baby. The flight attendant came over and told me you were waiting to switch seats. You were giving up your comfortable, first class seat to us. 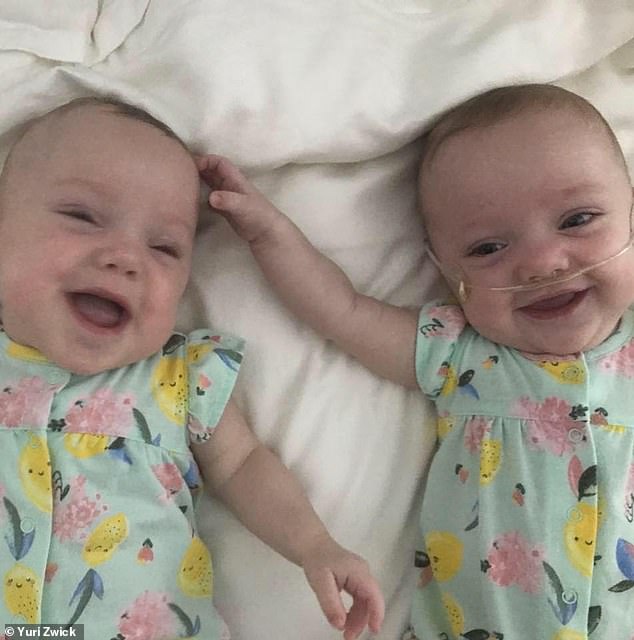 Lucy, right,  suffers from chronic lung disease but still has a smile on her face

Kelsey said that the good deed offered by the fellow passenger reminded her how ‘blessed’ she and her husband, Yuri, are.

‘Not able to hold back tears, I cried my way up the aisle while my daughter Lucy laughed! She felt it in her bones too… real, pure, goodness. I smiled and thanked you as we switched but didn’t get to thank you properly.****************************Sooo… thank you. Not just for the seat itself but for noticing. For seeing us and realizing that maybe things are not always easy. For deciding you wanted to show a random act of kindness to US. It reminded me how much good there is in this world. I can’t wait to tell Lucy someday. In the meantime… we will pay it forward. AA 588 passenger in seat 2D, we truly feel inspired by your generosity.’

American AIrlines have also responded to the story: ‘We truly appreciate the kindness of the gentleman in 2D. We were able to connect the two of them together, and our team is reaching out to him as well to extend our thanks for the kind gesture. In the words of Kelsey, we also want to pay it forward with our thanks and appreciation,’ a spokesperson said. 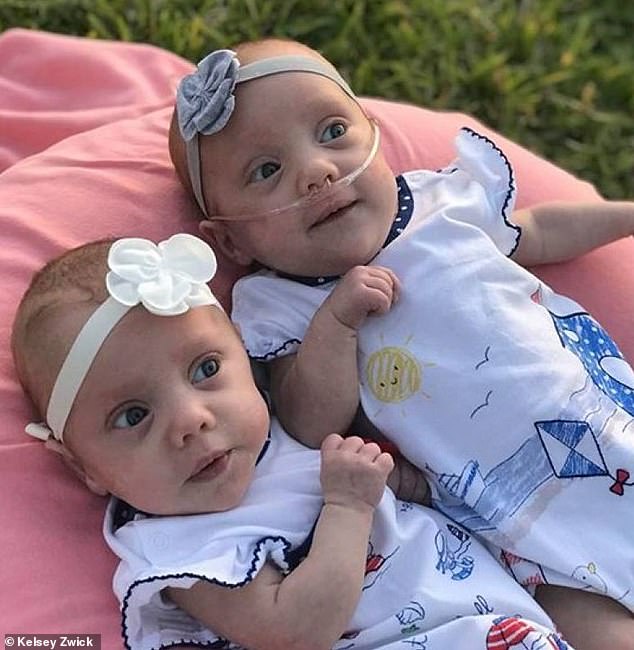 Kelsey says she hopes others are inspired to go out and do good for others after hearing their story.

‘You never know what people are going through. So many people helped us along the way. One small act of kindness is a ripple effect!’ she said. ‘And when you get to the other side of your struggle – whatever that looks like – pay it forward!’

‘Thank you to the man in 2D! The world is hungry for kindness… and I hope this expands far beyond what happened to us yesterday,’ she concluded.

Jason’s wife, Kristy, noticed that the story was spreading across the internet over the weekend and American Airlines have since put Jason and Kelsey in touch with one another.

‘Thank you doesn’t cover it,’ Kelsey wrote to him in a private message. ‘The world clearly needed your kindness.’ 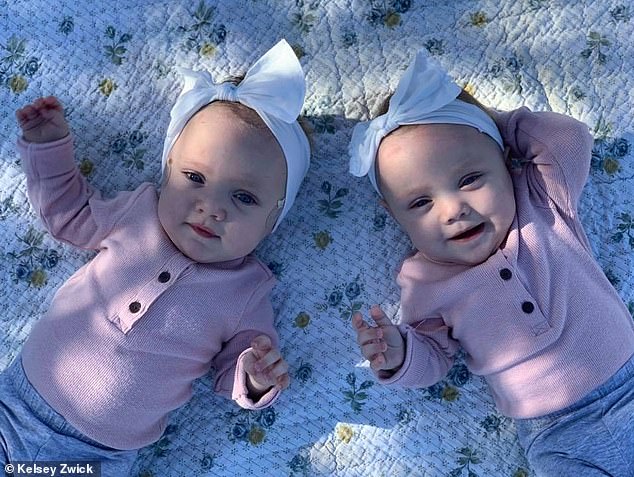 Ms Zwick shared the story on Facebook in hopes to find the man. It quickly went viral and had many people were left in tears after reading her tale