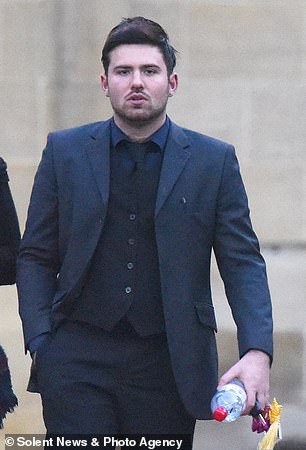 Shailem Dodson, 20, ploughed into two doormen after being kicked out of a club in Bournemouth, Dorset

Shocking CCTV footage captures the moment a former soldier drunkenly smashed his car through metal barriers and into two nightclub doormen in a ‘revenge’ attack.

Shailem Dodson, 20, became aggressive when he was kicked out of a popular nightclub in Bournemouth, Dorset, after two women complained he was causing trouble, a court heard today.

In the CCTV footage shown to the jury Dodson then mounts the pavement in his black Vauxhall Corsa before ploughing through metal railings and launching doorman Rafael Zanin into the air.

Terrified onlookers rushed to Mr Zanin’s aid, as he lay on the floor bleeding from the head, while a second doorman punched Dodson to knock him to the ground as he attempted to flee the scene.

In the footage Dodson continued to drive along the pavement before he crashed into a metal pole and damaged his car.

Winchester Crown Court also saw CCTV footage of Dodson punching doorman Darren Peterson, before being restrained on the floor as he allegedly spat at and threatened to kill the nightclub security staff.

Prosecutors allege Dodson ‘used his car as a weapon’ in a ‘revenge attack’ after being kicked out of Halo nightclub around 2.30am on December 12, last year. 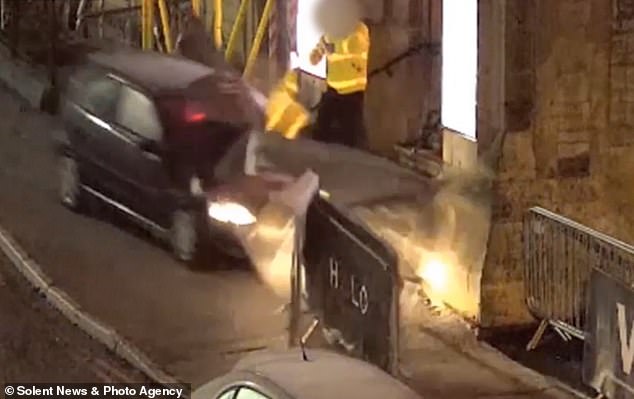 The court heard Mr Peterson had escorted Dodson out of the club, where he then became aggressive despite his friend trying to calm him down.

Jurors at court retired to consider their verdicts this afternoon.

Opening the case, prosecutor Rob Welling said: ‘Mr Dodson was intent on getting his revenge.

‘He used his car as a weapon and drove into two doormen.

‘One of those doormen, Rafael Zanin, was struck by the front of the car and launched into concrete steps behind him. 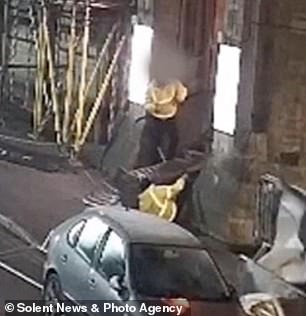 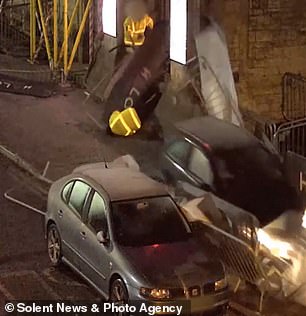 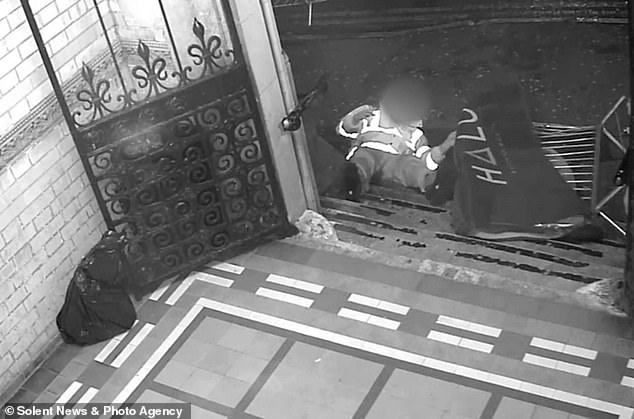 ‘You may well think, members of the jury, it is a miracle he only ended up with cuts and bruises.’

Giving evidence, doorman Mr Peterson denied he and his colleagues had been ‘heavy-handed’ with the defendant.

Mr Peterson told jurors Dodson had shouted: ‘You wait, I will be back,’ adding that the former soldier of two and a half years had said he would kill them.

The doorman said: ‘I went to talk to [Dodson] after a complaint was made by two women in the club.

‘He went straight on the defensive, saying he had done nothing wrong.

‘We wanted to restrain him and then hold on to him until the police came along and he was arrested or moved out the area. 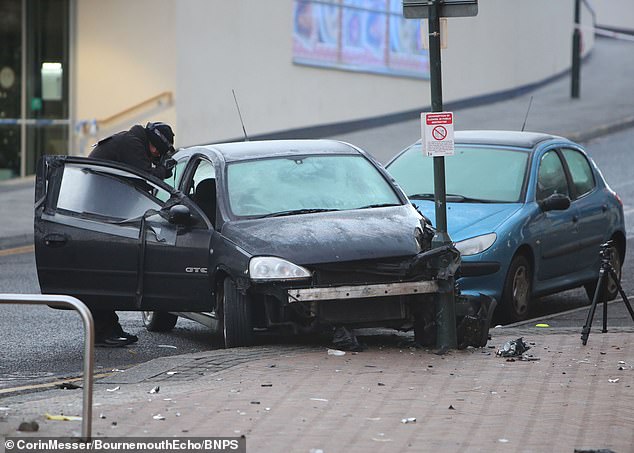 Dodson’s black Vauxhall Corsa following the attack. Dodson had continued to drive along the pavement before crashing into the metal pole

‘We found out the police were not coming because there had been other incidents, it was Christmas time – silly season.

‘While we were restraining him, the suspect tried to bite us, threatened us with his family members, mainly his dad, but we hear that a lot.

‘He said he would come back and kill us. As he was leaving he was still very angry, shouting threats still.

‘Again, we don’t take the threats seriously. Most of the time, these people never come back.’

Mr Peterson added: ‘When I went back into the club, I got just a few steps on to the dance floor when I got a call to get to the front door. 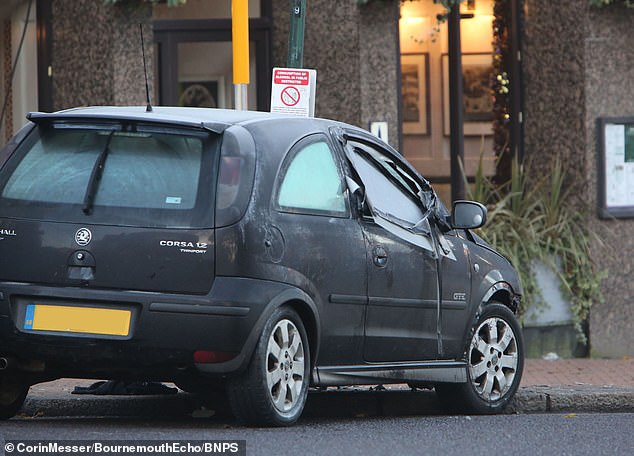 ‘I saw Rafa lying on the floor bleeding and saw a car had crashed into a lamppost, I thought it was a drink driver who had come off the road.

‘Then I heard someone shout for help as they were trying to hold the suspect. I ran straight towards him and punched him with enough force for someone who had just run into one of my colleagues.

‘Then I restrained him and he said: “Kill me now. I have messed up, kill me now.”

‘He was apologetic by this point.’

During the trial, jurors have been shown CCTV footage on the night of December 11 into the early hours of the next day.

In one clip, Dodson is seen punching doorman Mr Peterson after being escorted out the club.

The court has also seen footage of Dodson running away from his friend David Mallen as he returned to his parked car before getting behind the wheel and going back to the club. 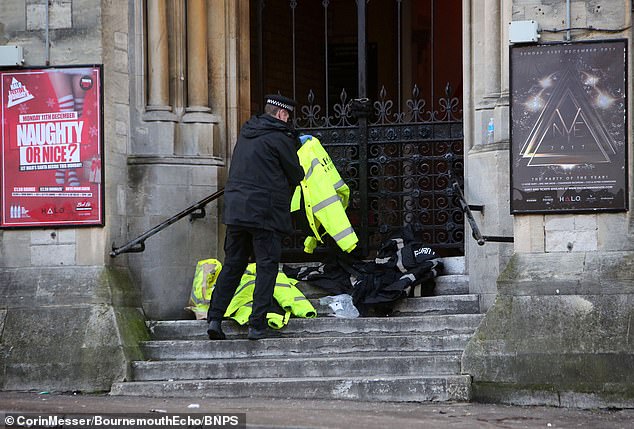 Bouncers jackets are collected by Dorset Police at the scene. Dodson allegedly allegedly spat at and threatened to kill the nightclub security staff

Once there, he allegedly mounted the pavement with the intent to try and kill the doormen stood outside.

Ben Hickson, who was also grazed by the car, told the court he had ‘never experienced anything like it’.

He said: ‘I was stood outside with Rafa. Nobody was heavy-handed with the suspect, but he did say he would come back.

‘It wasn’t going to be for anything nice. ‘I was hit in the leg, causing some bruising and taking a layer of skin off, and I had whiplash.

‘You get threats all the time and you have to take them seriously to a certain degree, but we obviously didn’t take this one seriously enough.

The court heard he has already admitted assaulting Mr Peterson and drink driving. The trial continues.

Emily Ratajkowski delivers heartfelt speech at GQ Awards
Celebrities forced to slash millions off the price of their luxury mansions
Jussie Smollett faked letter and hoax attack because he wanted a higher SALARY
Pucker up! Diver comes face-to-face with a shark and it KISSES him in amazing underwater footage
Alderley Edge residents fear they've lost thousands because of new welcome signs inside the village
Taxpayers buy washing machine for flat where John Bercow's NANNY lives
Boris Johnson sends THREE letters to the EU: the one from him will urge Brussels NOT to grant delay)
Millions with flu-like symptoms could be told to stay off work if coronavirus spreads