A restaurant hostess in New Jersey shared a shocking text exchange with her boss who told her not to return to work if she attended a friend’s funeral instead of making it in for her shift.

The unidentified hostess at Café Seventy-Two in Ewing Township texted her manager in hopes to arrange for her shift to be covered so she may attend the funeral service scheduled for this weekend.

The employee explained in the thread: ‘Someone close to me just passed away, and I’m trying to find a cover for my shifts so I can attend the funeral service rather than call out and leave you guys hanging.’

Outraged, her boss replied to the request: ‘Oh wow thanks. Just don’t come back to work.

‘I like you but I’m sick of all staff not taking their job seriously and just f****** expecting me to cover all of your shifts. I have a business to run at the end of the day. And a family.’ A restaurant hostess in New Jersey shared a shocking text thread between herself and her boss. The employee tried to arrange for her shift to be covered so she could attend her late friend’s funeral 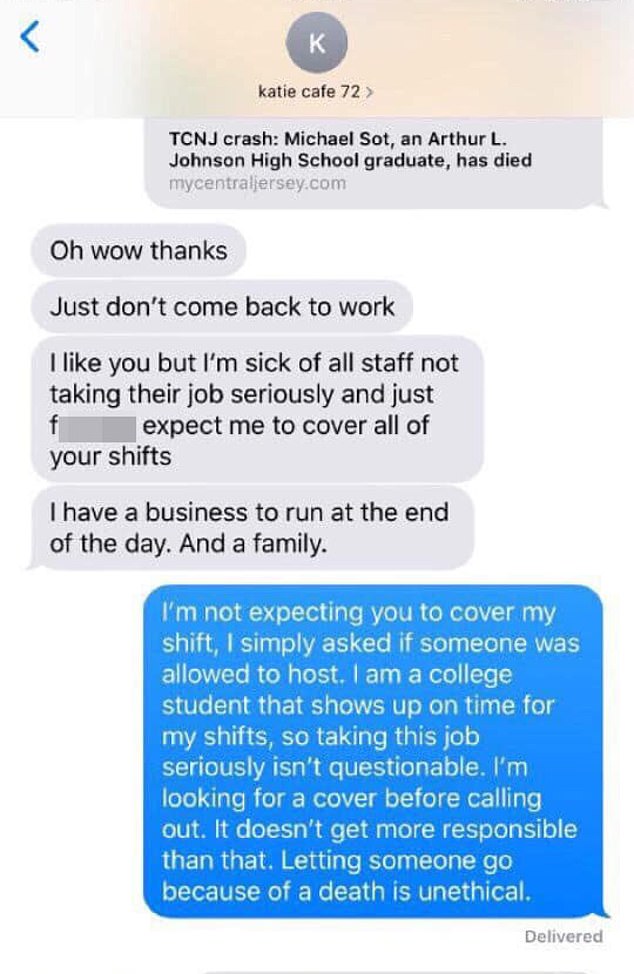 Outraged, her boss replied to the message: ‘Oh wow thanks. Just don’t come back to work’ 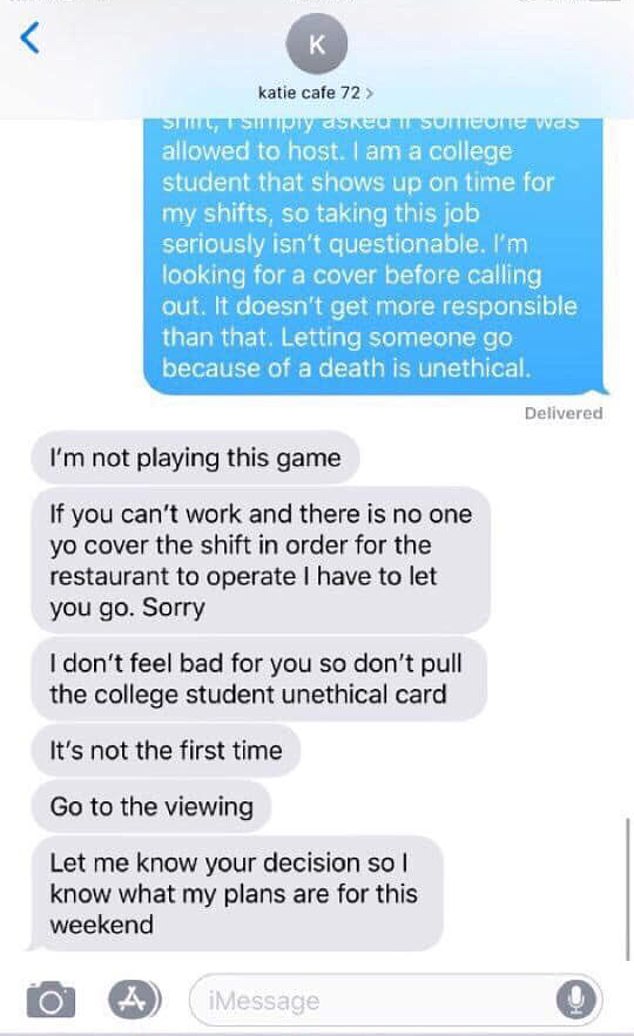 The employee wrote back: I’m not expecting you to cover my shift, I simply asked if someone was allowed to host. I am a college student that shows up on time for my shifts, so taking this job seriously isn’t questionable.

‘I’m looking for a cover before calling out. It doesn’t get more responsible than that. Letting someone go because of a death is unethical.’

The boss added: ‘I’m not playing this game. If you can’t work and there is no one to cover the shift in order for the restaurant to operate I have to let you go. Sorry. I don’t feel bad for you so don’t pull the college student unethical card. It’s not the first time.

‘Go to the viewing. Let me know your decision so I know what my plans are for this weekend.’

Café Seventy-Two has since deleted their social media pages after they received an overwhelming amount of hate mail and poor business reviews as a result. 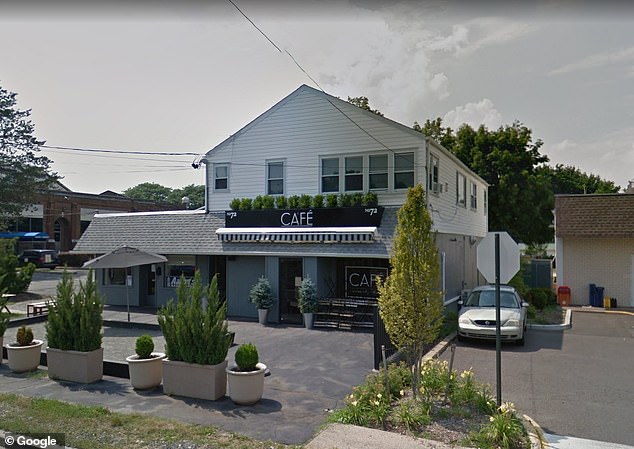 The manager’s husband, who goes by Ben, released an apology statement to their website on his wife’s behalf.

Ben confirmed the employee was not terminated and the conversation ‘displayed was completely taken out of context.’

The apology said in part: ‘The employee was not fired. Her last shifts were this weekend before leaving for holiday break to be with her family and friends until January 28th. This private conversation was not related in any way to the mourning of Michael.

‘Although this interaction was displayed completely out of context by a friend of the employee and drastically misrepresents Katie and our establishment, we recognize that there is NOTHING that excuses it.

‘We carelessly let the stresses of family and business replace the professionalism, respect and empathy that every employee and person deserves.’

The couple also contributed a $1,000 donation to the family of the late Michael Sot. 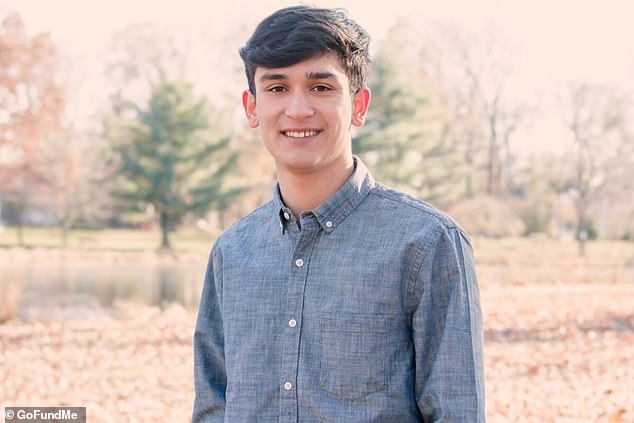 The College of New Jersey student, Michael Sot (pictured), 20, was killed after an impaired driver smashed into his vehicle head-on, police said Sunday 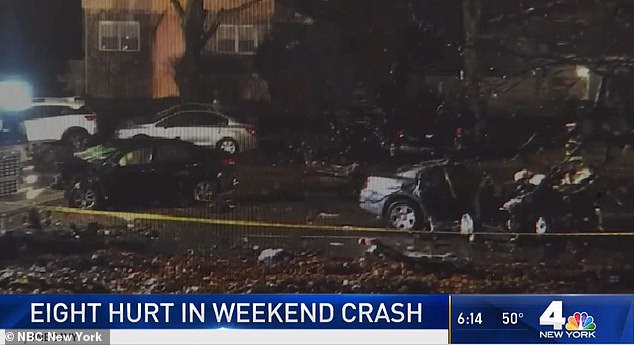 The 20-year-old college student was killed by an impaired driver who smashed into his vehicle near a New Jersey college on Sunday.

According to the  account, Sot was the designated driver for four other students when the crash occurred about a mile from The College of New Jersey.

Police said a car driven by David Lamar V, 22, crossed into an oncoming lane and collided with the car Sot was driving.

Lamar, who was in the car with one other passenger, was reportedly impaired at the time of the crash.

Sot was rushed to a local hospital where he succumbed to his injuries. Details of Sot’s injuries were not revealed. 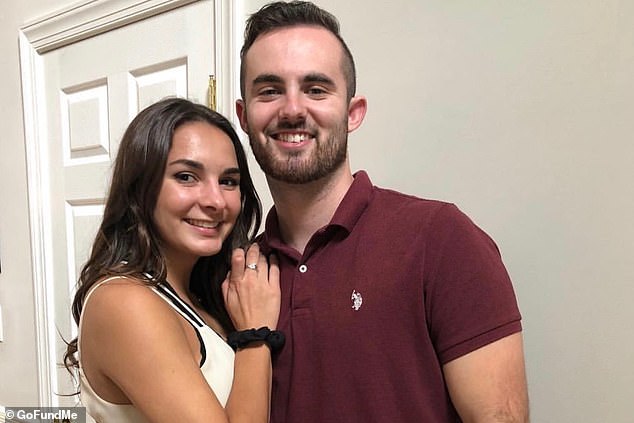 Danielle DeFlores, 21, Matthew DeGenova, 21, Anthony Galante, 19, and Ryan Moore (pictured right), 21, were all riding in Sot’s vehicle. All of the students suffered injuries in the crash. Some of those injuries include broken bones, a ruptured bladder and a brain injury

All of the students suffered injuries in the crash. Some of those injuries include broken bones, a ruptured bladder and a brain injury, according to .

Police said the crash occurred on Pennington Road, where Sot’s father said his son had been driving back and forth to shuttle students to an off-campus party that night.

The College of New Jersey’s president, Kathryn A. Foster, told NBC that news of Sot’s death ‘is heartbreaking’.

‘Michael was an outstanding student, and a trusted and caring friend with a bright future ahead of him.’

‘The TCNJ community is keeping his family, friends and loved ones in its thoughts during this tremendously difficult time,’ she added.

The Mercer County Prosecutor’s Office said Tuesday that Lamar is expected to be charged with vehicular homicide.

Money raised on GoFundMe will be split between those affected by the crash to help pay for medical bills and other fees.

PICTURED: Gunman, 32, who shot dead his ER doctor ex-fiancee
Father of Sandy Hook victim is found dead from apparent suicide
Playboy model, 25, is charged with the murder of 71-year-old psychiatrist
Man who accidentally stole car 21 years ago to buy Slurpees searches for the vehicle's owner
Georgia ex-SWAT officer says hummingbird visits him EVERY spring after he nursed it back to health
New AI-based tool can 'detect heart failure from just ONE heartbeat'
Police shoot up minivan after 'drunk' suspect fires first
Christchurch mosque shooting survivors speak one year after the tragedy