Tyson Fury continued his tradition for singing after a boxing match by getting the entire press room to join in Don McLean’s American Pie after his title fight in Los Angeles.

The British boxer was adjudged to have drawn his WBC championship bout against Deontay Wilder and while that meant the American retained the belt, Fury remained in a positive mood after the fight.

“Sing along if you know the words!” Fury told the press as he began to repeat the lyrics to the eight-minute 27-second song.

“Come on guys, join in!” Fury added, encouraging the press to sing before dropping the microphone.

It’s not the first time the 30-year-old has engaged in some post-fight karaoke.

In 2015, having just beaten Wladimir Klitschko to become WBA, IBF and WBO heavyweight champion, Fury sang Aerosmith’s I Don’t Want to Miss a Thing in the ring and dedicated it to his wife and fans. 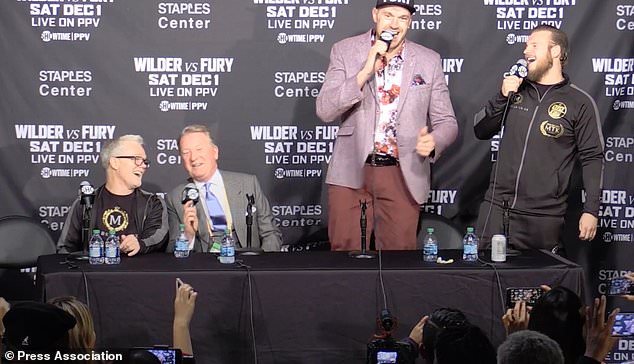 Creepy humanoid robotic sends Twitter customers right into a panic (however all is just not because ...
Jordan Peele says black actors will always take center stage in his movies
Nipsey Hussle's murderer's 'getaway driver' says she had no idea he had just shot him
Trump's actions are an 'assault on the honor of this country,' Buttigieg slams the president
Body language expert reveals how 'stoic' Kate took cues from the Queen
U.S. Women's soccer star Ashlyn Harris calls Jaelene Hinkle homophobic
Judge orders pharmaceutical giant Johnson & Johnson to pay $572million
NYPD officer who was filmed shoving female protester to the ground is charged with assault