will be the new British National Party and destroy if they march through with far-Right activist Tommy Robinson next week, has warned.

The anti-Brussels stalwart predicted ‘absolutely calamitous’ scenes of drunken thugs brawling outside Downing Street will be used to discredit leaving the EU ‘for years to come.’

His dramatic intervention comes ahead of a planned Brexit rally in Whitehall next Sunday by the struggling Eurosceptic party alongside English Defence League founder Stephen Yaxley-Lennon, who goes by the name of Tommy Robinson. 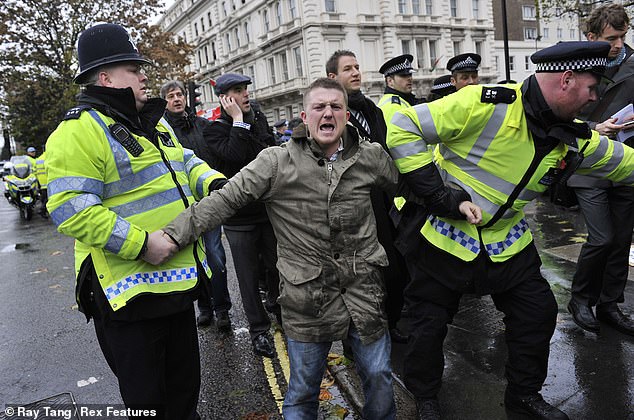 Tommy Robinson is arrested at an English Defence demonstration in London

In an interview with The Mail on Sunday a ‘depressed’ Mr Farage pleaded: ‘I know if that happens, that is the day that Ukip becomes the BNP, that’s it, that is the moment.’

And Ukip’s most famous face has threatened to tear up his membership card after 25 years unless Ukip’s ‘obsessive’ anti-Islam leader Gerard Batten is forced out at a crisis meeting today.

Mr Batten has hired Mr Robinson as an adviser on ‘Muslim rape gangs’.

And he has vowed to flank him on the march just two days before the crucial Commons vote on Brexit on December 11.

Mr Batten is the fourth leader to take the helm of the troubled party since Mr Farage stood down in 2016, but the former mouthpiece of the anti-EU group claims that his successor is turning Ukip into a poisonous ‘cult’. 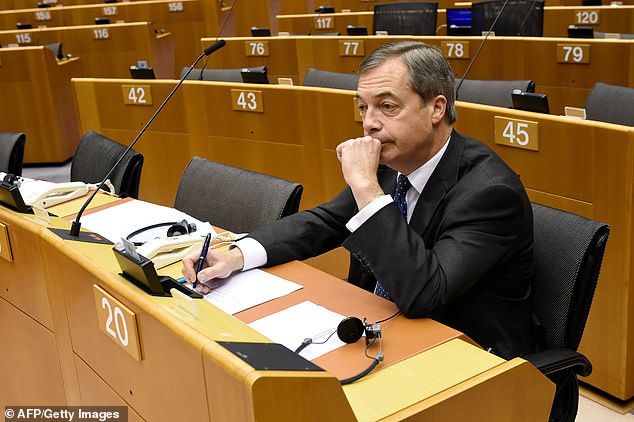 In an interview with The Mail on Sunday a ‘depressed’ Mr Farage pleaded: ‘I know if that happens, that is the day that Ukip becomes the BNP, that’s it, that is the moment’

He says he is only reluctantly speaking out after weeks of trying to warn Mr Batten privately that the planned rally would be ‘catastrophic for all moderate Leave supporters.’

‘If the senior person at that march is the elected Ukip leader, that is a disaster for the Brexit cause’,

Urging the party’s National Executive Committee, who are meeting this afternoon, to sack Mr Batten in order to stop the march, he blasted: ‘Wrecking Ukip is one thing, but seriously damaging the Brexit cause is quite another.

‘It will be seen to be a Ukip branded thing with Tommy Robinson, and if it descends into scuffles, violence, worse, who knows to say?’

He pointed to ‘previous Robinson rallies’ that saw ‘beer bottles being thrown over the fences of Downing Street and police horses being attacked’, adding he was ‘certain that elements of that will occur’.

‘And that then becomes the enduring vision of Brexit that is used for years to come for why Brexit is a bad thing,’ he added.

If Mr Batten survives the bid to oust him, Mr Farage said ‘it would be very difficult to stay associated beyond that moment’. He added: ‘We are heading up this blind alley of becoming a party that is almost a cult against a religion and I think that is the wrong place to be.’ 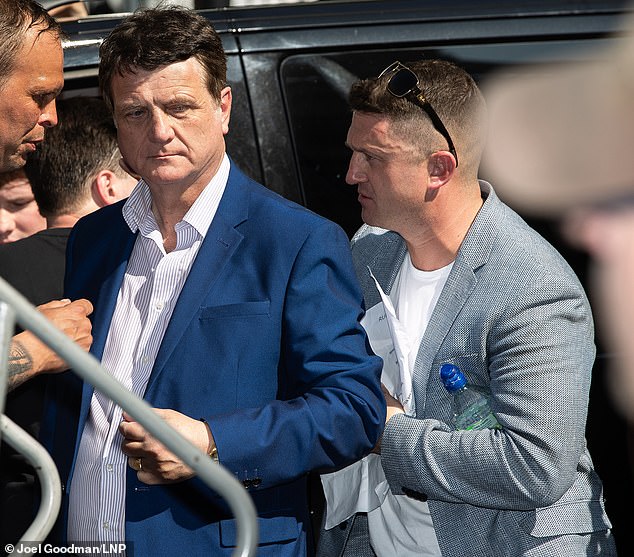 He described being pushed to the verge of quitting the party he co-founded as ‘very difficult’ after a quarter of a century, adding: ‘I just think that this would be unrecoverable.’

Mr Farage told The Mail on Sunday he was ‘very down, very, very down, to be honest I’m quite depressed about it really.

‘It’s been a huge part of my life. I was there at the beginning of it.’

Last week Mr Farage boasted to the BBC that he had ‘pretty much single-handedly killed off the BNP’, adding he had always fought to make Ukip ‘a non-racist, non-sectarian party’, but Mr Batten had ‘blown a hole’ in that with his flirtation with Mr Robinson.

He said last night: ‘God knows who they have let in.’

Former BNP yob Stephen Yaxley-Lennon founded the hateful English Defence League in 2009 but has since become one of the most famous far- Right figures in the world as ‘Tommy Robinson’.

Born in Luton in 1982, the former aircraft engineer lost his job in 2003 after a drunken brawl with a police officer and drifted into becoming a central figure in British far-Right extremism.

As a petty criminal he was in and out of prison for football violence and mortgage fraud, but claimed he was turning his back on criminality and violence in 2013 after being jailed for travelling on someone else’s passport to visit EDL fans in America.

He dramatically quit his anti-Islam mob group, claiming he would be a peaceful activist with the help of counter-radicalisation group the Quilliam Foundation but instead stepped up his poisonous rhetoric against Muslims.

He hit global fame after being locked up for contempt of court earlier this year – sparking an international ‘Free Tommy’ campaign backed by former Donald Trump strategist Steve Bannon, with a White House envoy lobbying the UK to release him.

Bannon branded Robinson ‘a solid guy’ and the ‘backbone’ of Britain and campaigned for him to be released from jail – sparking a rift with his ally Nigel Farage.

Robinson had been arrested outside Leeds Crown Court and jailed for 13 months after filming defendants on trial for rape while already on serving a suspended sentence for a similar offence.

He was later released on appeal, despite warnings he had risked collapsing the trial into evil Huddersfield grooming gangs.

But Robinson, 35, defended his actions, saying: ‘If I believe I’m morally right then I’m not bothered about what your law says.’

Farage told The Mail on Sunday: ‘I think if you had to find a working-class hero, this is not it. This is not it. Repeat prison sentences, etc.’