‘s first leftist president in seven decades was sworn in at an inauguration ceremony.

The new president vowed to profoundly transform Latin America’s second-biggest economy and to end corruption in the government. 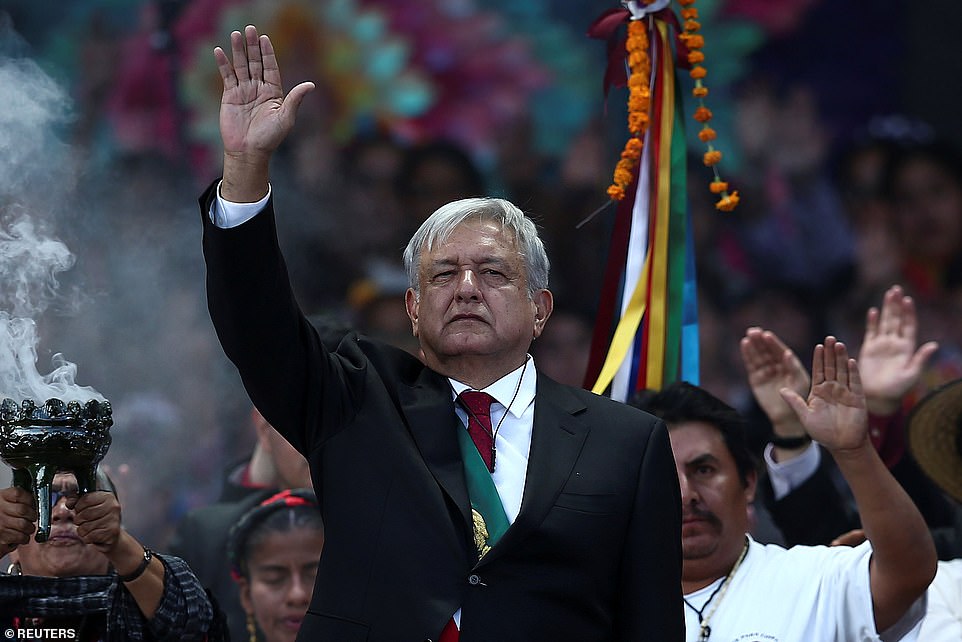 Mr Lopez Obrador breezed through a day of public appearances that included taking the oath of office and speaking to congress and attending an inaugural celebration.

He received a spiritual cleansing by indigenous leaders as part of the festivities, then closed out the gathering with a folksy 90-minute speech to the thousands of jubilant fans jamming the Zocalo, vowing to help the poor in a nation where almost half the population lives in poverty. 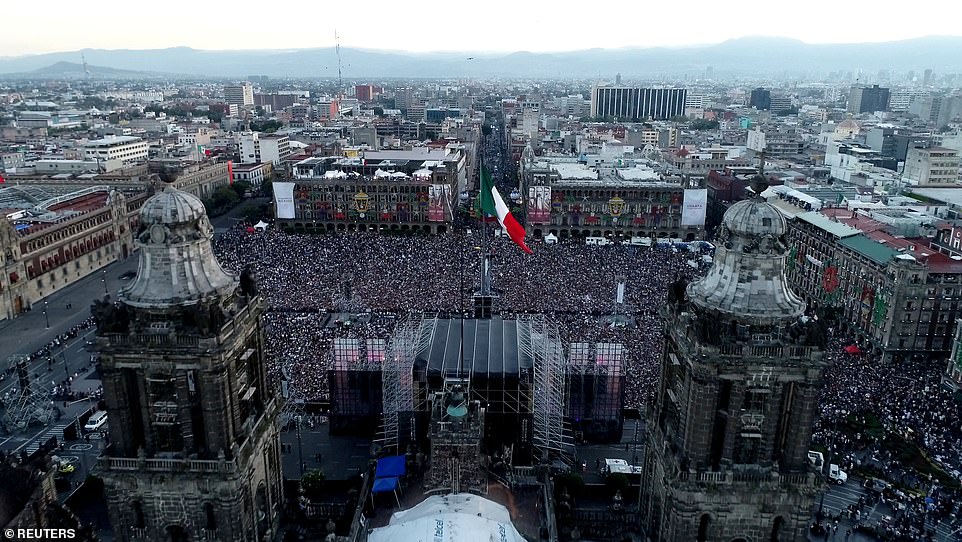 ‘For the good of all, the poor come first.’

Speaking in a personal style he honed over decades of small-town rallies, he told the crowd: ‘Be patient and have confidence in me.’

Hopes for change are running high among the more than 30 million Mexicans who voted for Mr Lopez Obrador in a sweeping July 1 election victory that also gave his party a majority in congress.

At the same time, worries are mounting among critics who see an expanding authoritarian streak.

Ms Moy said she had expected a more conciliatory tone from the president, who instead blamed many of Mexico’s ills on decades of neoliberal policies that opened the country to greater trade and foreign investment. 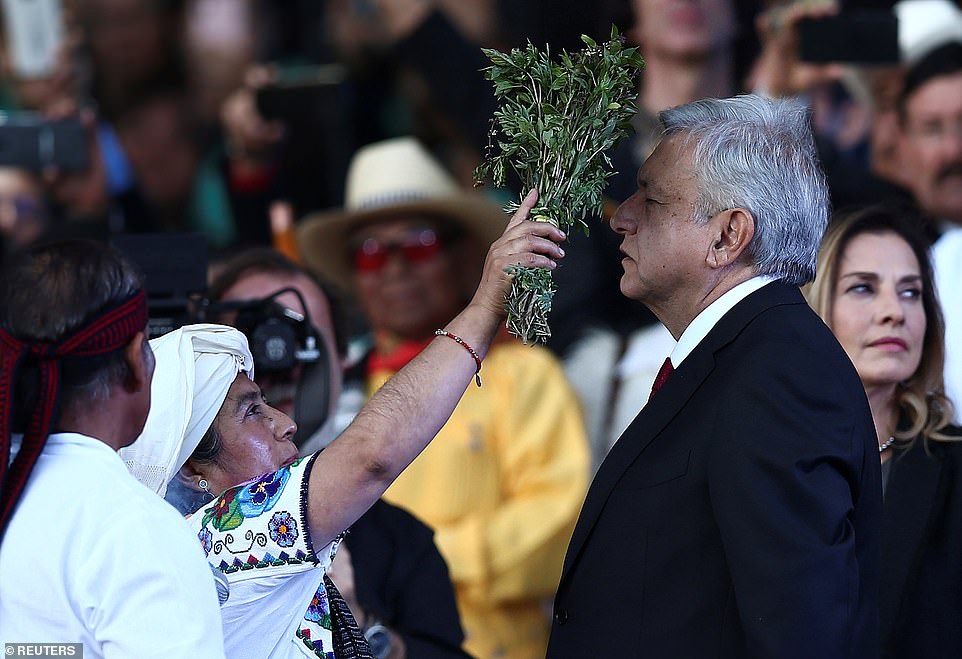 While many are jubilant that Mexico has its first leftist president in decades, Ms Moy noted that others are concerned about the economic decisions that Mr Lopez Obrador will make, and of his use of referendums to validate his proposals.

Already, Mr Lopez Obrador has halted construction of a new 13 billion dollar airport for Mexico City after having that move backed in an unofficial referendum that saw just over 1% of voters participate.

The peso and Mexican stocks plunged in response.

After decades with a closed, state-dominated economy, Mexico’s governments since 1986 had signed more free trade agreements than almost any other nation and privatised every corner of the economy except oil and electricity.

But Mr Lopez Obrador has brought back a more insular tone not heard much since the 1960s, saying he wants to build more state-owned oil refineries and encouraging Mexicans to buy Mexican.

One of the most pressing issues he faces at the start of his presidency is the caravan of thousands of Central American migrants camped out at the US border, hoping to obtain asylum in the US.

In his first official act in office, he signed an agreement with counterparts in three Central American countries to create a development plan for the region.

The plan would include a fund to generate jobs as a way to lessen the poverty that drives people to leave El Salvador, Guatemala and Honduras.

Most on the minds for many in Mexico, though, is the rising tide of violence.

‘I don’t expect him to change everything in two months, or even in six years, but if the violence comes down then good things will happen,’ said Amira Rozenbaum, who is optimistic for change.

The president pledged to personally oversee daily 6am security briefings and to work 16-hour days to confront the brutal violence in Mexico.

He also promised to restore the energy sector to prominence and bring up Mexico’s oil production from its current 25-year lows.

Mr Lopez Obrador began his political career leading demonstrations against oil pollution in his native state of Tabasco, and he is the country’s first president since the Mexican Revolution to rise to prominence as a protest leader.

Combined with a deep sense of nationalism and his own place in history, he envisions his administration creating a historic ‘fourth transformation’ of Mexico, following independence from Spain, the liberal reforms that broke the church’s dominance in the 1850s and the 1910-1917 revolution.

Mr Lopez Obrador’s many devotees express an unflinching faith in him.

They call themselves AMLOvers and break into chants of: ‘It’s an honour to be with Lopez Obrador.’

Maria Antonia Flores was one of those on the Zocalo to celebrate and said she had supported Mr Lopez Obrador for more than 20 years.

All around her, party loyalists donned burgundy vests and hats stamped with the logo of his Morena party.

‘We love him because he’s honest. He’s hard-working. He has never let us down,’ she said. ‘He’s not corruptible.’

Mr Lopez Obrador has pledged to end centuries of poverty and marginalisation for Mexico’s more than 70 indigenous communities, and he became the first president to take part in a ceremonial inauguration by indigenous groups.

Traditional healers brushed him with bunches of herbs and blew incense smoke over him to purify him, and they invoked the spirits of their ancestors and the land to liberate him from any bad influences.

‘What we want, what we desire is to purify public life in Mexico,’ Mr Lopez Obrador said during the ceremony.

‘I repeat my commitment: I will not lie, I will not steal or betray the people of Mexico.’

His vow to root out government graft resonates with many, including some who have disagreements with him on other matters.

‘Everybody wants spending to be efficiently managed,’ Mr Slim said.

Paul McCartney reveals he has to relearn his songs before performances
ALEX BRUMMER: The EU will haggle like an aggressive market trader…but they always cave in eventually
OJ Simpson's former lawyer Robert Shapiro, 76, is rushed to L.A. hospital for emergency surgery
Is there still Sex in the City at 60? You bet! Candace Bushnell is back with another honest book
Katharine McPhee wedding EXCL: Star stuns in ruffled gown as she marries David Foster in London
Trump congratulates Vladimir Putin and Mohammad Bin Salman for reaching a deal to stop oil war
Pregnant woman gives partner second chance after he fractured her eye socket in savage attack
Boris Johnson pledges 'massive' summer school 'catch-up operation' to help pupils