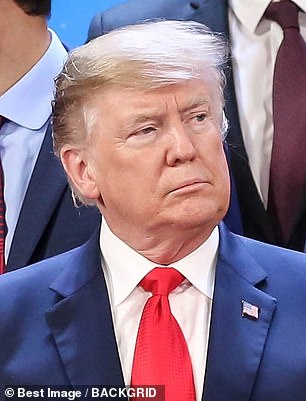 President Donald Trump released a statement with his wife, First Lady Melania Trump, on the Friday night passing of former President George HW Bush. Trump is shown at the G20 Summit in Buenos Aires on Friday

President released a statement with his wife, First Lady , on the Friday night passing of former President George HW Bush.

‘Melanie and I join with a grieving Nation to mourn the loss of former President George HW Bush, who passed away last night,’ Trump wrote.

But as of this time last year, relations between Bush and Trump were not the nicest, with Bush calling the current leader of the United States a ‘blowhard’ in a book about him and his son, and fellow former President, George W Bush. 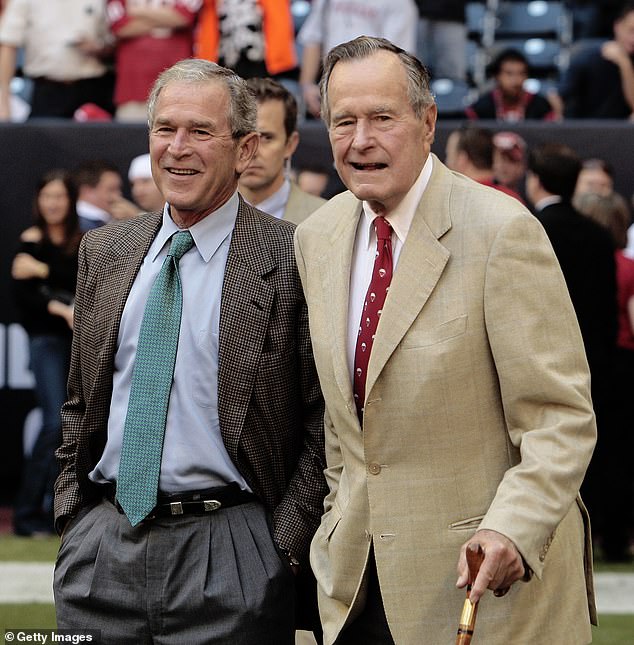 In historian Mark Updegrove’s book titled ‘The Last Republicans,’ HW said of Trump, ‘He’s a blowhard,’ and his son, 43rd President George W Bush, joined his dad in criticizing Trump. The two are shown walking the sidelines before the game between the San Francisco 49ers and Houston Texans at Reliant Stadium on October 25, 2009 in Houston, Texas

‘This guy doesn’t know what it means to be president,’ he said.

Trump hit back at the time, through a statement made to by a White House official.

‘If one presidential candidate can disassemble a political party, it speaks volumes about how strong a legacy its past two presidents really had,’ the official said.

‘And that begins with the Iraq war, one of the greatest foreign policy mistakes in American history.’

That was all forgotten on Saturday though, when Trump took to Twitter to deliver a message of condolence for the loss of 41.

‘Through his essential authenticity, disarming wit, and unwavering commitment to faith, family and country, President Bush inspired generations of his fellow Americans to public service – to be, in his words, “a thousand points of light” illuminating the greatness, hope, and opportunity of America to the world,’ Trump said. 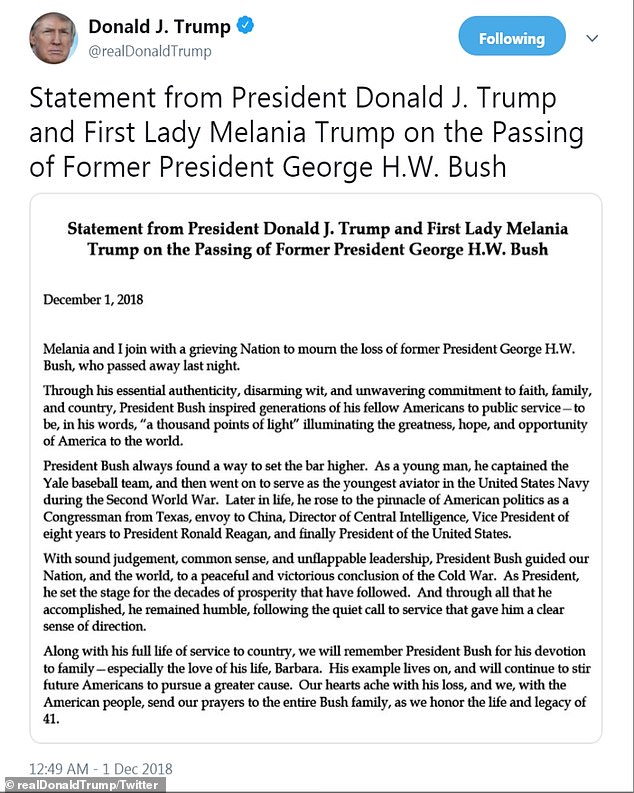 ‘President Bush always found a way to set the bar higher,’ the current president went on to say.

‘As a young man, he captained the Yale baseball team, and then went on to serve as the youngest aviator in the United States Navy during the Second World War. Later in life, he rose to the pinnacle of American politic as a Congressman from Texas, envoy to China, Director of Central Intelligence, Vice President of eight years to President Ronald Reagan, and finally President of the United States.

‘With sound judgment, common sense and unflappable leadership, President Bush guided our Nation, and the world, to a peaceful and victorious conclusion of the Cold War. As President, he set the stage for the decades of prosperity that have followed. And through all that he accomplished, he remained humble, following the quiet call to service that gave him a clear sense of direction.

‘Along with his full life of service to country, we will remember President Bush for his devotion to family – especially the love of his life, Barbara. His example lives on, and will continue to stir future Americans to pursue a greater cause. Our hearts ache with his his loss, and we, with the American people, send our prayers to the entire Bush family, as we honor the life and legacy of 41.’

Anne Hathaway denounces white privilege in an award acceptance speech
Man-eating tigress blamed for killing 13 people in two years is shot dead in India after hunt
Anthrax alert in Namibia as more than 50 people are struck down by the killer disease
Tragedy as three-week-old elephant without a name dies at Ohio zoo after a sudden illness
'Michael Jackson will always be Paris's dad' says his goddaughter
Prince Harry will be called on to apologise for the 'monster' of apartheid
Toddler is found in a CAGE surrounded by more than 600 animals, marijuana plants and guns
Judge lifts restraining order on new tell-all book by President Trump's niece