Mohammed bin Salman and Vladimir Putin were photographed shaking hands before a formal sit-down meeting at the G20 Summit, just a day after the pair were seen greeting each other with a high five.

Salman, who has been accused by the international community of ordering the killing of journalist Jamal Khashoggi, and Putin, who has faced claims he ordered the nerve attack on Sergei Skripal in Britain, were pictured hand-in-hand during the second day in Buenos Aires.

The Russian leader has also been put under increasing pressure in recent days after warships rammed, fired on, then seized three Ukrainian boats in the Kerch Strait in a serious escalation of tensions around Crimea. 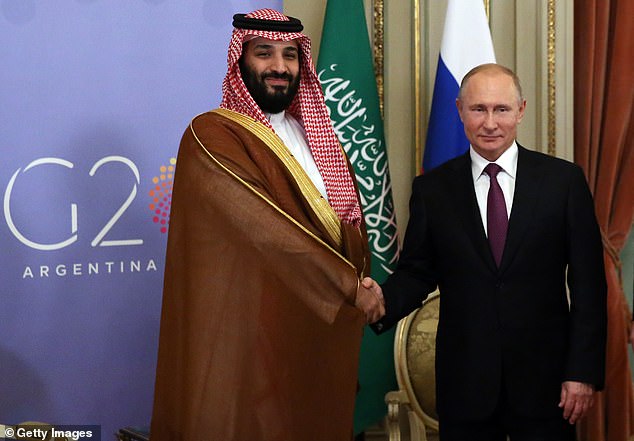 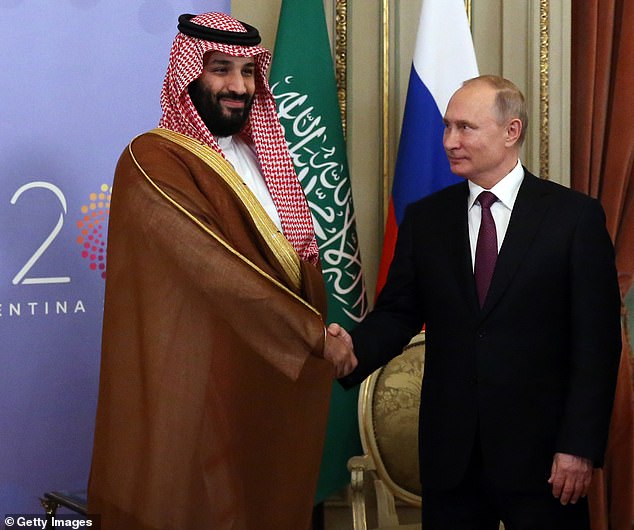 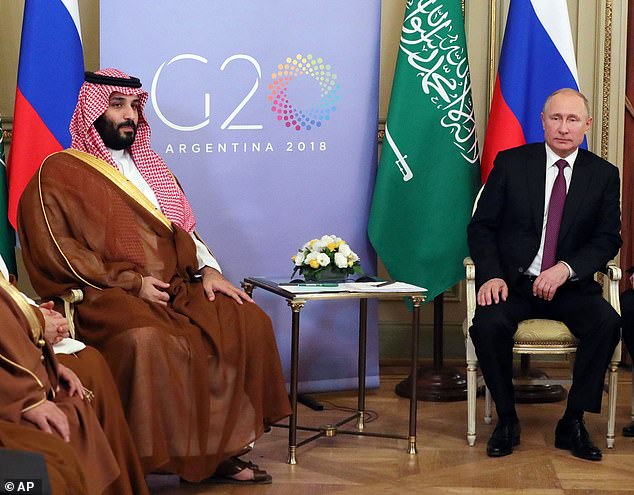 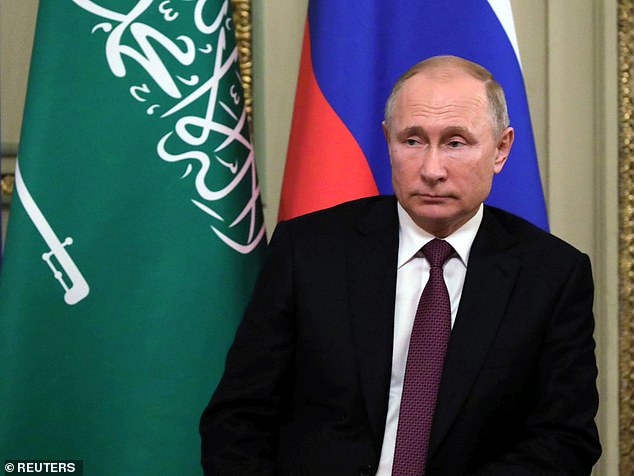 It did not appear to affect pair as the pair could not resist a rye smile ahead of their meeting, where they discussed oil, according to a Kremlin spokesman.

Earlier, bin Salman met with Argentinian president as controversy over the murder of journalist Jamal Khashoggi continues to linger.

The Saudi de-facto leader was facing political exile over his alleged involvement in the killed of Khashoggi, although he appears to have been embraced by a number of world leaders at the G20 Summit.

The Saudi Press Agency released pictures of Prince Mohammed talking to Mauirci oMacri, but gave no details of what they discussed. 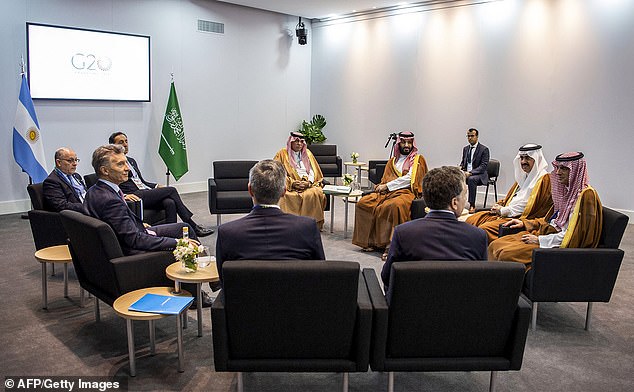 The flags of the two respective nations were on show as other delegates gathered around in a circle in a meeting room.

Bin Salman and Macri had met on Friday evening at a cultural event to cap off the end of Friday’s events.

The pair were photographed sharking hands as Macri’s wife looked on next to her husband. 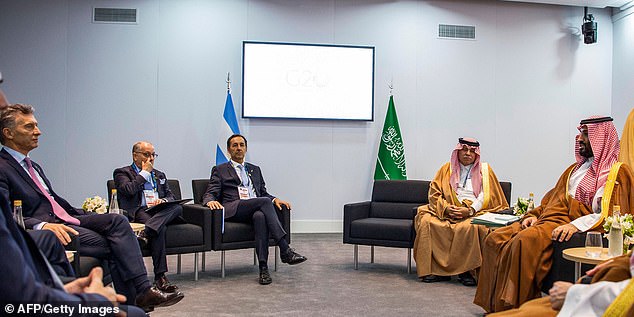 Coming into the two-day meeting between the heads of state, it appeared that bin Salman would face widespread condemnation and isolation for his alleged involvement in the death of journalist Jamal Khashoggi.

A meeting with Turkish president Recep Tayyip Erdogan is expected to focus on Ankara’s investigation into the death of Khashoggi at Saudi Arabia’s consulate in Istanbul in October. 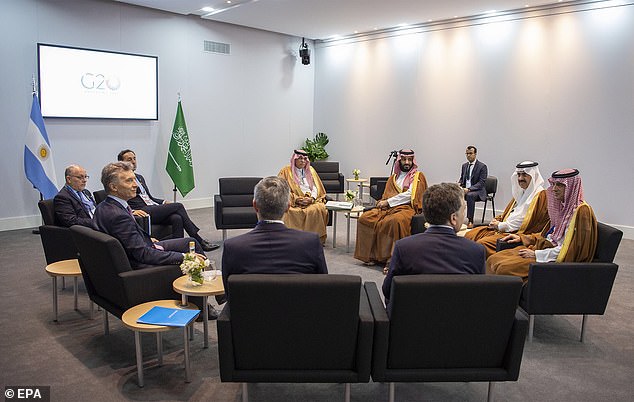 Coming into the two-day meeting between the heads of state, it appeared that bin Salman would face widespread condemnation and isolation for his alleged involvement in the death of journalist Jamal Khashoggi

On Friday, Mrs May delivered a ‘robust’ message to Saudi Crown Prince Mohammed bin Salman that the UK expected his country to co-operate fully with the Turkish probe and to conduct its own investigation in a ‘credible and transparent’ way.

British officials said trade was not on the agenda for the talks with the Saudi heir apparent, known as MBS.

Mrs May shook hands with the Saudi prince, who was also berated by French president Emmanuel Macron in a terse conversation captured on video. 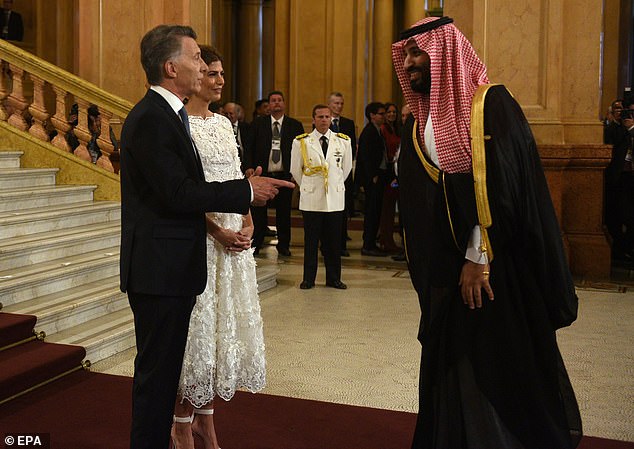 'I've connected with one in every of my mates': Love Island's Grant Crapp GAY intercourse confession
BBC film crew step in to save the life of a poisoned lion cub
The New Year's sex resolutions you should be making whether you're single or coupled up
European Commission's Jean-Claude Juncker said Trump will refrain from imposing higher car tariffs
Widespread power outages hit parts of New York's Manhattan
Seven types of sugar daddy relationships and they're not all about money
TONY RENNELL details how Dr Doolittle author invented the tales in the trenches
'Grim Sleeper' killer Lonnie Franklin, 67, dies in California prison after four years on death row