A woman has been battling PTSD for three years, which she puts down to a ‘horrific’ childbirth where she claims she was ‘neglected’ by midwives.

Kirsty Tuthill, 35, of Market Weighton, East Yorkshire, claims she was ‘abandoned’ by ‘short-staffed’ midwives, left without pain relief for hours and told she was ‘making a fuss’.

Left in a ward screaming in pain, Mrs Tuthill even heard other pregnant women mock her discomfort and laugh at her distress.

Mrs Tuthill alleges she was forced to start pushing on the toilet floor of the anti-natal ward at Hull Women and Children’s Hospital when midwives refused to acknowledge she was in labour.

Following the birth of baby Elvie, the new mother said she experienced a complete ’emotional lock down’ that left her unable to bond with her daughter. 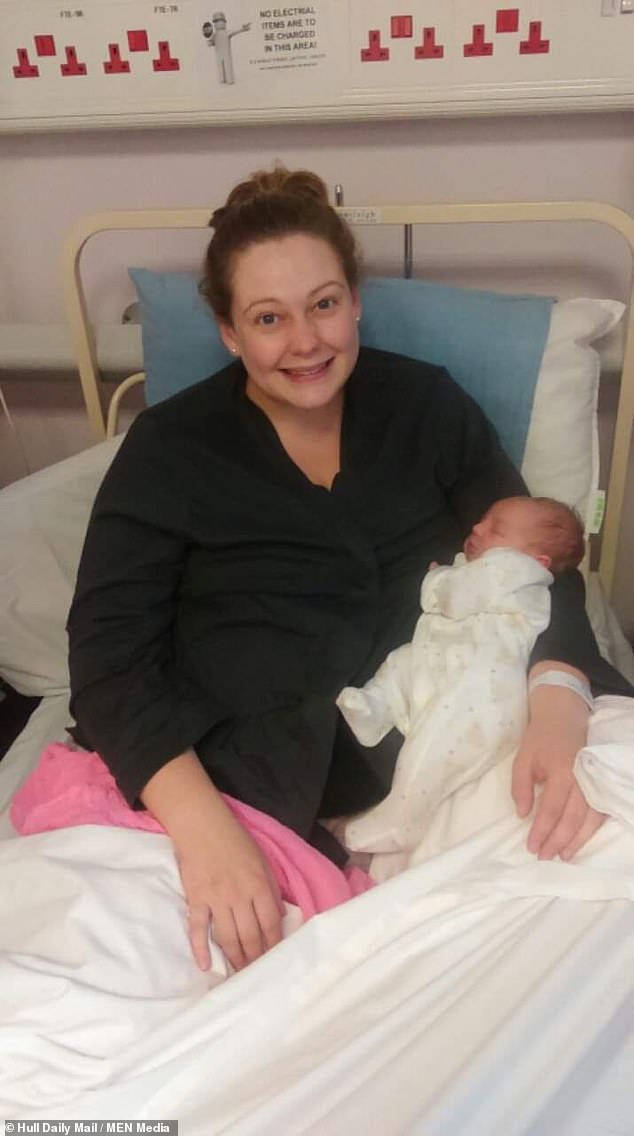 Kirsty Tuthill has been battling PTSD for three years, which she puts down to a ‘horrific’ childbirth where she was ‘neglected’ by midwives. Pictured with daughter Elvie at Hull Women and Children’s Hospital, she claims she was ‘abandoned’ and left without any pain relief 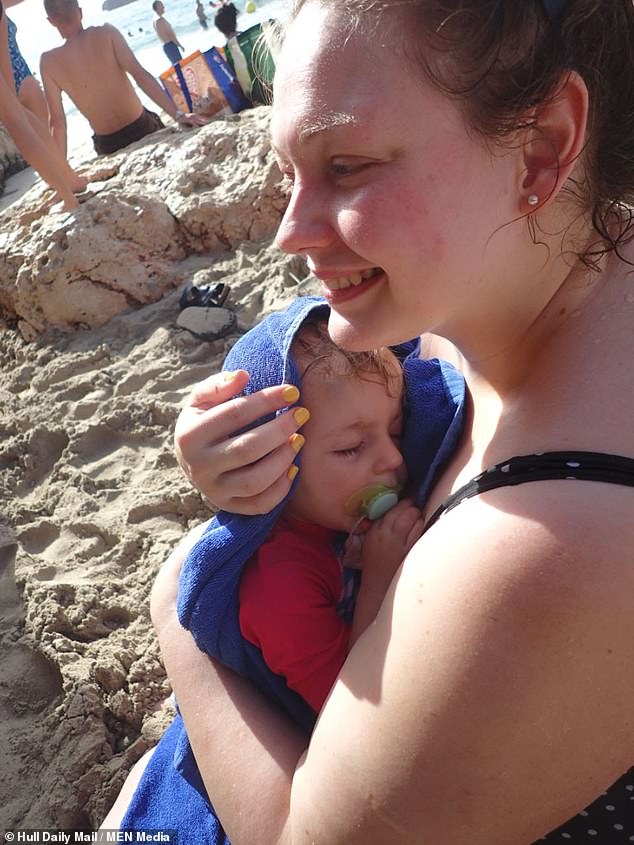 Pictured with Elvie as a toddler, Ms Tuthill alleges she went into a complete ’emotional lock down’ after her daughter’s birth and struggled to bond with the newborn. ‘It took years for me to feel what other mothers describe. I grieve for what I missed out on with her,’ she said

‘My husband and I can recall how difficult it was with perfect clarity,’ Mrs Tuthill said.

‘I was ignored, told I was making a fuss, denied pain relief for hours as there were no doctors to assess me to provide it and midwives kept telling me they were short staffed. I was terrified.’

Mrs Tuthill also claims staff failed to provide her with any information on the progress of her labour. The hospital has yet to respond to her claims.

‘Right from the start the contractions were incredibly painful,’ she said.

‘This is because my baby was in the wrong position and unable to make progress, the midwives never told me this was the case.

‘I was essentially stuck at 2cm for 40 hours. I went into hospital and was sent home. I was in so much pain I was vomiting and shaking. I was dismissed.

‘We went back into hospital some five hours later. I was left in a four-bed room, screaming for help, with women waiting to be induced narrating my labour to their friends down the phone and laughing at me, making jokes to each other about my level of discomfort. This went on for hours.

‘Eventually I hauled myself to the bathroom, I didn’t realise it, but I’d started pushing, she started to come out on the bathroom floor, at which point they forced me back onto the bed and magically all of a sudden I was fully dilated.’

What is post-traumatic stress disorder (PTSD)?

Symptoms are often severe enough to have a serious impact on the person’s day-to-day life, and can emerge straight after the traumatic event or years later.

PTSD is thought to affect about 1 in every 3 people who have a traumatic experience, and was first documented in the First World War in soldiers with shell shock.

People who are worried they have PTSD should visit their GP, who could recommend a course of psychotherapy or anti-depressants.

Mrs Tuthill blames the experience for her struggling to form a relationship with Elvie.

‘I feel incredibly angry and grieve intensely for what I missed out on with her,’ she said.

‘After she was born I emotionally shut down completely. I struggled to bond with my daughter. It took years for me to feel what other mothers describe.

‘Immediately after I became worried about everything. I did everything I could to push thoughts of the birth out of my mind, any recollection made me extremely anxious but I’d find myself “there” again.

‘I would find myself immersed in the experience mentally again breathing hard and sweating and feeling completely hopeless and in distress.’

Mrs Tuthill only realised she needed help when she unexpectedly became pregnant in March this year.

‘I cried pretty much constantly for the first 15 weeks and realised I couldn’t go through it again,’ she said.

‘I started calling all the services I could find, essentially looking for an advocate to help support me with the hospital and to allow me a modicum of control over the situation after feeling so neglected, ignored and shamed the first time. ‘

The Emotional Wellbeing Service did an in-depth assessment of Mrs Tuthill and diagnosed her with PTSD.

‘It was completely unexpected, I’d never even considered this as a possibility,’ she said

Mrs Tuthiull has since been undergoing Eye Movement Desensitisation and Reprocessing therapy (EMDR) every week.

This works on the theory that traumatic memories have not been properly processed by the brain, but can be reprocessed correctly via therapy involving eye movement, aural and physical prompts.

‘It helps your mind process the traumatised memories that are “stuck”,’ Mrs Tuthill said.

‘I’ve gone from pushing all thoughts of the birth away and panicking when they arise to feeling neutral, and in some respects positive, about the experience.’

Hull and East Yorkshire Hospitals NHS Trust has been approached for comment.

Triple M's Emma Freedman says she's ready for children
Liverpool 3-0 Southampton: Mo Salah back on the goals as Reds go top
No back-to-back games for Leonard, coach says
Want to save £480 a year on bills? Be brave and haggle to score discounts
Labour WILL demand a second referendum at the second vote to approve May's Brexit deal
Eight-bedroom country mansion on Loch Ness on sale for £490,000 (same price as one-bed London flat)
Man, 74, who was shot with a crossbow while fixing satellite dish on his home dies in hospital
Caroline Flack: stylist friend shares photo of star with child