A second Republican senator has said he will vote against President Donald Trump’s nominee to serve as a district judge in North Carolina, likely dooming the prospects of Thomas Farr filling the nation’s longest court vacancy.

Civil rights groups such as the NAACP have heavily criticized Farr for his work defending state laws found to have discriminated against African-Americans.

Farr is nominated to serve as a district court judge in North Carolina.

Republican Sen. Tim Scott of South Carolina announced on Thursday that he would not vote for Farr. He joins Sen. Jeff Flake of Arizona and 49 Democratic lawmakers in opposing the nominee.

Farr once served as a lawyer for the re-election campaign of Republican Sen. Jesse Helms in 1990. 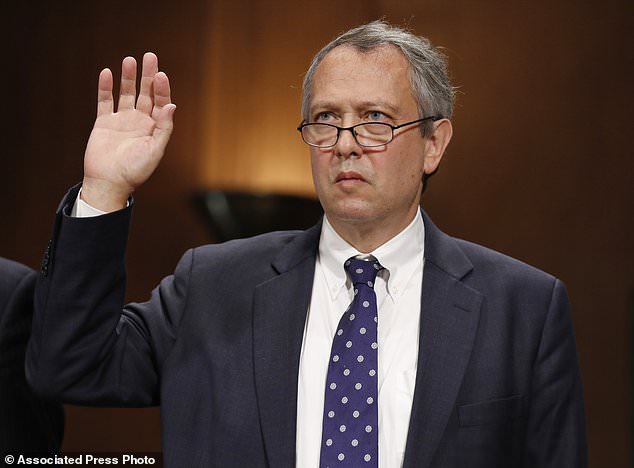 The Justice Department alleged that about 120,000 postcards sent mostly to black voters before that election was intended to intimidate them from voting.

The postcards targeting black voters said they could be prosecuted and imprisoned for up to five years if they tried to vote in a precinct in which they had lived for fewer than 30 days.

Farr told the Senate Judiciary Committee he was not consulted about the postcards and did not have any role in drafting or sending them.

He said that after he had been asked to review the card, ‘I was appalled to read the incorrect language printed on the card and to then discover it had been sent to African Americans.’

A 1991 Justice Department memo, first reported by The Washington Post, raised questions about Farr’s claim that he was never consulted about the postcards. The memo said Farr had met with key campaign officials and had advised them ‘that a postcard mailing like the mailing conducted in 1984 would not be particularly useful.’

Scott cited the memo as to why he would vote against Farr.

‘This, in turn, creates more concerns. Weighing these important factors, this afternoon I concluded that I could not support Mr Farr’s nomination.’

Scott has supported an overwhelming number of Trump’s judicial nominees, but in July, the nomination of Ryan Bounds to serve on the 9th U.S. Circuit Court of Appeals, was withdrawn after Scott said he ‘had unanswered questions that led to me being unable to support him.’ 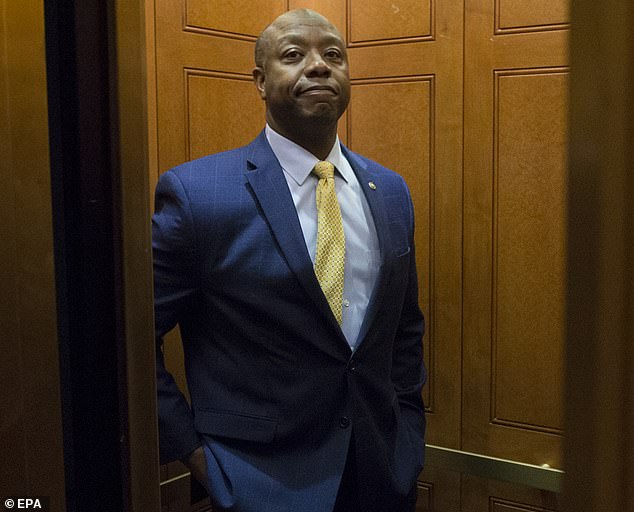 Republican Sen. Tim Scott of South Carolina announced Thursday that he would not vote for Farr. He joins Sen. Jeff Flake of Arizona and 49 Democratic lawmakers in opposing the nominee

He said Scott ‘has done a courageous thing.’

‘Thomas Farr has been involved in the sordid practice of voter suppression for decades and never should have been nominated, let alone confirmed to the bench. Thankfully, he won’t be,’ Schumer said.

Earlier Thursday, senators had agreed to postpone the vote on Farr until next week. That decision came less than 24 hours after Republicans needed Vice President Mike Pence to cast a tie-breaking vote Wednesday to move Farr’s nomination forward for a final vote.

The history of the judicial opening has contributed to the acrimony. President Barack Obama nominated two African-American women to serve on the court, but neither got a hearing.

Republican Sens. Thom Tillis and Richard Burr of North Carolina both supported Farr’s nomination. Tillis said earlier in the week he believed that Farr was being treated unfairly.

Scott is the lone black Republican in the Senate. The NAACP and the Congressional Black Caucus had been highly critical of Farr for his work defending stay laws they said suppressed the black vote.

GOP leaders in charge of the North Carolina Legislature hired Farr and others at his firm to defend congressional and legislative boundaries that the state’s legislature approved in 2011. A federal court eventually struck some boundaries down as racial gerrymanders and the Supreme Court affirmed that decision.

Farr also helped defend a 2013 law that required photo identification to vote, reduced the number of early voting days and eliminated same-day registration during that period.

North Carolina Republicans said that requiring voter ID would increase the integrity of elections. But the 4th U.S. Circuit Court of Appeals ruled that the state provided no evidence of the kind of in-person voter fraud the ID mandate would address. The Richmond, Virginia-based court said the law targeted black voters ‘with almost surgical precision.’

Farr told lawmakers that, as an advocate, he vehemently disagreed with the argument that the state’s legislature sought to curtail the voting rights of people of color or any other voter. But, said, ‘I am obligated to follow the decision by the 4th Circuit and pledge that I will do so.’