It’s a terrifying jungle rite of passage that incites fear in all the celebrities.

And Sair Khan and Malique Thompson-Dwyer were next in line to chomp on some ‘delicacies’ as the pair took on the vile Dreaded Deliveries trial in Wednesday’s episode I’m A Celebrity… Get Me Out of Here!

But it was presenters Holly Willoughby and Declan Donnelly who were squirming watching the soap stars chow down on pig’s anus and mice tails coated in flies. 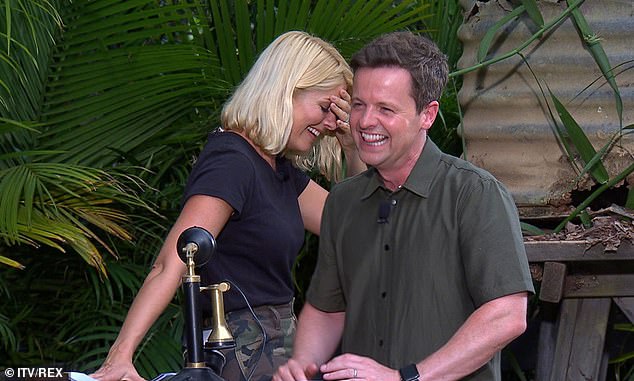 Grossed out: Holly Willoughby and Declan Donnelly were squirming watching Sair Khan and Malique Thompson-Dwyer chow down on pig’s anus and mice tails coated in flies 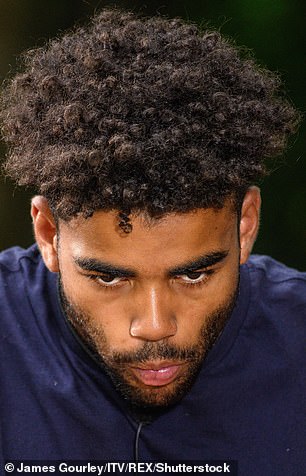 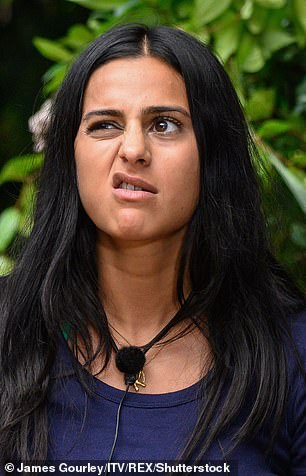 Yuck! As they watched on, Holly was seen turning away and hiding her head in the bushes as Hollyoaks actor Malique, 20, scoffed down Vinda Spew, made up of vomit fruit

As they watched on, Holly was seen turning away and hiding her head in the bushes as Hollyoaks actor Malique, 20, scoffed down Vinda Spew, made up of vomit fruit.

Finally returning to Dec’s side, Holly had a shock of her own when the Geordie presenter burped on her, clearly feeling sickened by the task himself.

actress Sair, 30, looked apprehensive as  she was treated to takeaway boxes full of jungle delights including rubbery cow teats placed in a curry sauce.

Malique had to eat a Cal-groan-e, a take on a traditional Calzone, but this one was filled with dead mealworms, crickets and cockroaches, as well as Frutti De Scare spaghetti, with raw fish eyes. 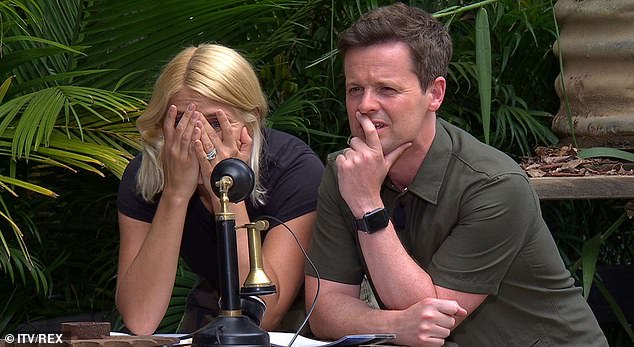 Vile: A nauseated Holly Willoughby couldn’t bring herself to watch as the eating commenced

Other foods eaten by the soap stars included a camel’s foot and a sheep testicle. For the final and eleventh star, the pair had to decide who was going to eat the Crispy Shredded Willy Beef – a sheep’s penis.

Both offered to do it, with Malique deciding he would be the gentleman and devour the penis.

Asked how it was by Dec, Malique replied: ‘Pride just takes over, especially when you have to eat willies… 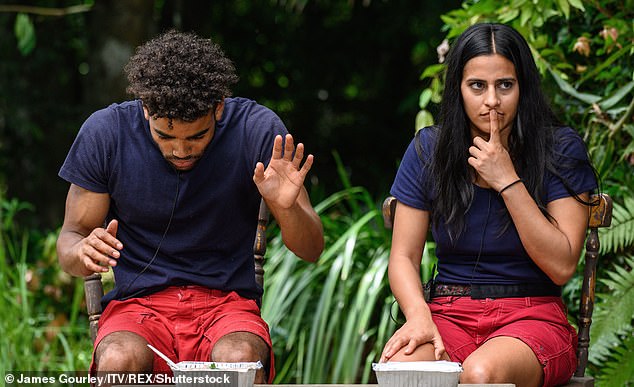 Stomach-churning: The Coronation Street actress, 30, and the Hollyoaks actor, 20, looked apprehensive as they were treated to takeaway boxes full of jungle delights including rubbery cow teats placed in a curry sauce 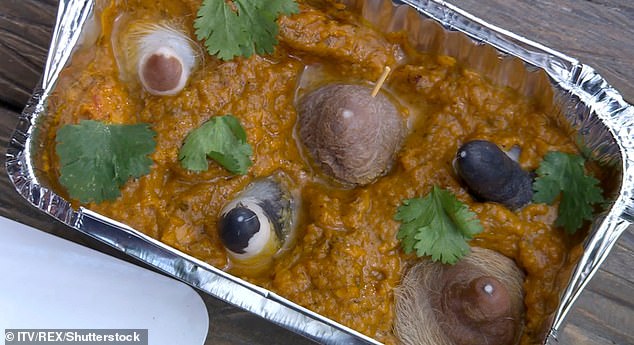 No: Inside was a vibrant curry sauce decorated with multi-coloured cows teats, with Sair gasping as she took in the vile sight 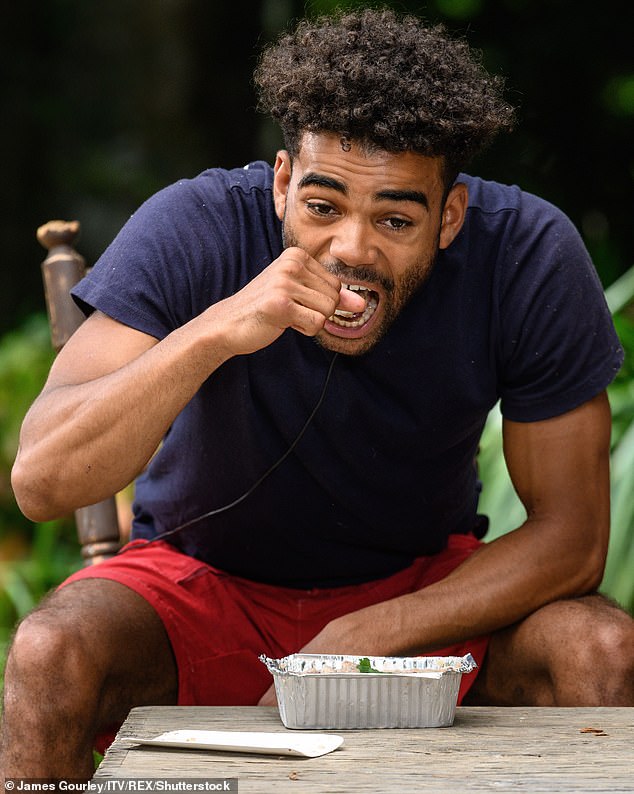 Grimace: A squealing Holly exclaimed ‘oh god’ before adding ‘That is teat masala’ 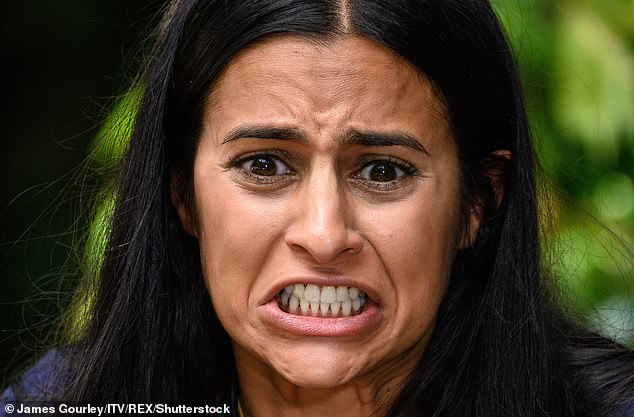 Interesting: Letting out a nervous laugh, Sair jokingly compared the teats to varieties of chocolate before going ‘I love milk chocolate so great. I’m really looking forward to it’

‘That was absolutely disgusting, I’ve still got bits in my mouth, nasty.’

And Sair was grateful to have Malique by her side. She added: ‘I couldn’t have done it if Malique wasn’t there, I needed that motivation. We’ll have such a good day today, everyone will be so happy.’

After getting 11 stars, the camp were treated to a meal of camel and vegetables.

Elsewhere on the show, camp chef John Barrowman nearly felt out with his campmate Rita Simons after making some rice for lunch. 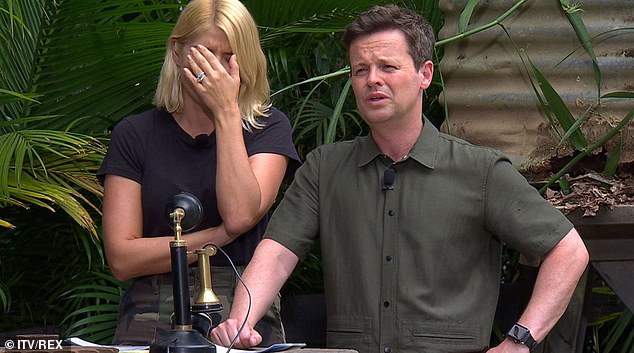 Can’t look: A nauseated Holly turned away and whispered ‘God’, refusing to watch as Sair picked up the body part 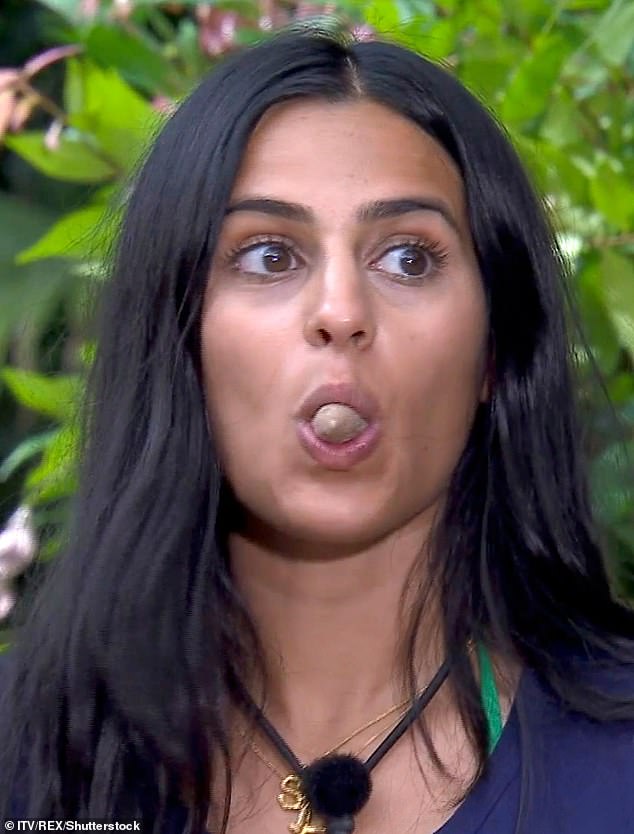 Bite of the action: An apprehensive Sair placed it into her mouth before sucking it in entirely as Holly and Dec burst into laughter 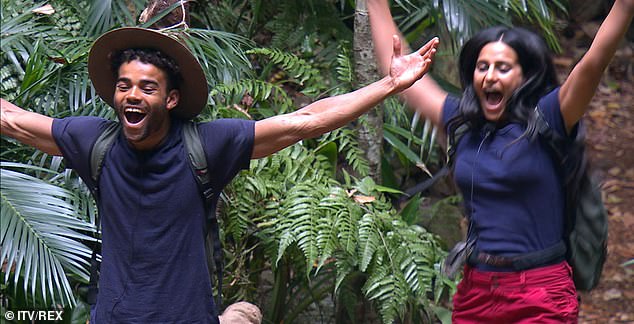 Laugh out loud: I’m A Celebrity… Get Me Out of Here! continues on Thursday night

When Rita heard that John had put on just four portions of rice, she was livid and speaking in the Bush Telegraph, she explained: ‘That’s not enough for 11 of us. Everyone’s too scared to speak up about it so I do in a jokey passive aggressive way.’

Back in the camp, she asked the other campmates: ‘Hands up who wants more rice because I do, put your hands up if you want more, it’s too much to squirrel away, and it’s ridiculous.’

I’m A Celebrity… Get Me Out of Here! continues nightly at 9PM on ITV.