Former Trump lawyer Michael Cohen will plead guilty to a federal charge of lying to Congress on Thursday, according to news reports.

Cohen has already testified in a Manhattan courtroom that he made an illegal hush-money payment to Stormy Daniels, a pornographic actress who claims to have bedded Trump a decade ago, ‘in coordination with, and at the direction of’ Trump.

The latest twist in his saga will come with an attached string of dozens of hours of of testimony that could be criminally damaging to the president. 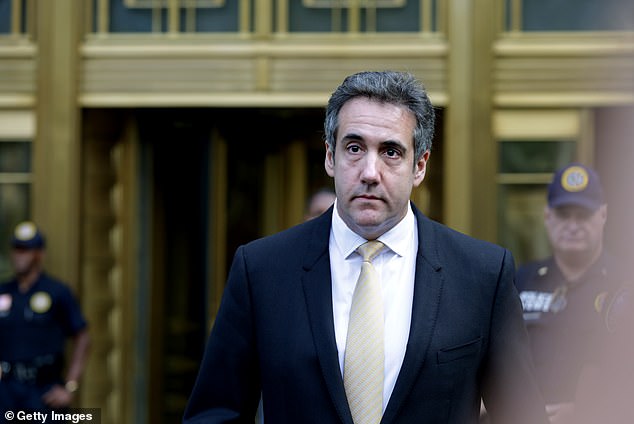 Michael Cohen, former lawyer to President Donald Trump, is pictured at the federal courthouse in Manhattan in August

Cohen’s new charge comes from Special Counsel Robert Mueller. His previous ones, bank and tax charges to which he has already pleaded guilty, were lodged by federal prosecutors in the Southern District of New York.

He is expected to be sentenced to between four and five years in prison in December for his first federal case. It’s unclear if the new guily plea will involve more jail time.

Cohen has publicly turned against President Trump since the FBI raided his home and offices in April.

Prosecutors deemed the $130,000 Stormy Daniels payment illegal because it was intended to help Trump avoid an embarrassing electoral loss to Hillary Clinton – and was therefore an ‘in-kind’ political contribution far in excess of the limits of the law.

Cohen’s earlier plea also covered his role in arranging an illegal payment from the parent company of the National Enquirer to Karen McDougal, a former Playboy model who claimed to have had a Trump affair.

At Cohen’s request, American Media Inc. bought the rights to McDougal’s life story and sat on it without publishing anything, in a practice known as ‘catch and kill.’